As Baldur’s Gate 3 finally releases into Early Access you may be a little overwhelmed with the choice for your starting character. Whether you’re a veteran Baldur’s Gate player or new to the Forgotten Realms and Faerun, Larian Studios’ Early Access release offers a robust character creation suite from the off.

Included in Baldur’s Gate 3 Early Access are 8 Races and 6 Classes, but it also features Subraces, Subclasses and a Background story to choose from. You will also choose your skills and abilities at an early stage. While this isn’t going to completely define your Baldur’s Gate 3 experience, it will be the beginnings of how the world reacts to your character and set you on certain paths as you explore the world of Baldur’s Gate. Let’s take a look at the basics and the main traits of each class and race.

Can I respec my character build in Baldur’s Gate 3?

At this Early Access stage there is no option to respec your character in Baldur’s Gate 3. This is important to know because once you hit play you won’t be able to undo your starting choices. Larian has said that it intends to build some form of respec option into Baldur’s Gate 3, but it’s not part of Early Access yet. The same goes for your choice of skills and abilities, so choose wisely. If you want to try a completely different race and class, you’ll have to start a new game within the Early Access build.

There are eight races in Baldur’s Gate 3 Early Access, but some have subraces, bringing your total race options to 16. You need to consider not just your character’s attributes and skills, but how the NPCs of Baldur’s Gate will react to you. As an experienced role-player you may like the challenge of playing a mistrusted race, or you might want to try to fit in with the people of Faerun by creating a character that reflects the most common races.

Larian has released 20 hours of campaign gameplay for Baldur’s Gate 3 and hopes that players will at least journey through that a few times with different races and classes.

As a general rule, Githyanki and Drow are uncommon in Faerun and will most likely be greeted with suspicion at the very least. Tieflings will be greeted with mistrust and fear, as they are descended from a demonic bloodline and look the part with those horns and other intimidating features. At the other end of the scale are humans, who may hide evil alliances, but look like the majority of the population and so are more likely to be greeted with respect.

Humans are the most recognisable faces in Faerun and if you’re a little intimidated by the world of Dungeon’s and Dragons, its racial politics and the reactions you’ll get by choosing a more fantastical race then humans are a good bet for a beginner – or just if you intend to poke around with the game for a couple of hours before starting a new game as a different race and class. Humans are also the most pliable, and great if you want to push the boundaries of role-play in Baldur’s Gate 3 because their common looks can hide any of your good or evil intentions.

Githyanki are warriors with silver blades who ride dragons. They are badass. They’re a no-brainer choice if you’re as fan of brute force, aggression and fighter builds. They exist to destroy the mind flayers after millennia of enslavement so if you’re looking for high action, the Githyanki is your first choice.

A High-Elf is a great magical race. Even those that don’t specialise in magic have magic abilities, so a High Elf should be your first choice if spells, spellcasting, magic items and other arcane practises are your thing.

A Wood-Elf is a great stealth build character option as they are adept at camouflage and archery. A Wood-Elf is ideal for getting in place on high ground unnoticed giving you an upper hand in any surprise attacks you plan.

Drow live below the land of Faerun but mix with other races. They are a race bent on revenge against the Lloth, and have a tendency for in-fighting so can be a tricky choice where more diplomatic options are required.

The Lloth-sworn Drow are one of least approachable races, with their intimidating bright red eyes enabling them to see well in the Underdark – the cavernous world below Faerun. The Early Access period doesn’t feature a lot of play in the Underdark yet, so both Seldarine and Lloth-sworn Drow might be a better pick for a second play through once the full game have been released. You don’t want to leave the two subraces in the same room with one another.

Now we’re starting to get into the meta subraces. A High Half-Elf will possess some magic abilities, and is perhaps a good option if you want the mythical appearance and dabble in magic artifacts, but also keep some decent combat abilities.

Like a High Half-Elf, a Wood Half-Elf has a few decent stealth options should you not want to build an all-out glass rogue character.

A Drow Half-Elf will have some magic abilities but little advantage in the Underdark, unlike the Lloth-sworn Drow.

Gold dwarves are all about pride, intuition and hardiness. If you want to role-play a specific mindset established by lore, a Gold dwarf is a fun, stoic option.

A Shield Dwarf is a more cynical dwarf, so not so hung up on family and traditions as a Gold Dwarf. They’re still tough and defend their name and homelands.

Stealthy and social, a Lightfoot Halfling is a good option should you want to sneak around but also not have to remain in the shadows and appear so damn suspicious to everyone. A good all-round stealthy option but without the mistrust of a Wood Elf.

Kind of like a Gold Dwarf in that they are tough and hardy (and resistant to poison, which is very hand in Baldur’s Gate 3), but still posessing those Halfling social skills, so easy to get on with the people of Faerun.

There’s no question that if you’re playing as a Asmodeus Tiefling you are playing as one of the bad guys and should expect a lot of friction from the inhabitants of Faerun. That can be a lot of fun, especially when you get to wield fire at your opponents. Just be careful with it and don’t expect many people to trust you.

A Mephistopheles Tiefling is your best race choice if you want to learn, experiment with and grow your arcane magic skills. Like any Tiefling, expect hostility from the outset.

A Zariel Tiefling has the benefits of being able to play with fire, but they are also strong, making them a fearsome opponent. Definitely not the option if you want a considered playthrough, but absolutely right if you want to play as a mean, tough, ruthless character. Expect aggressive reactions wherever you go. 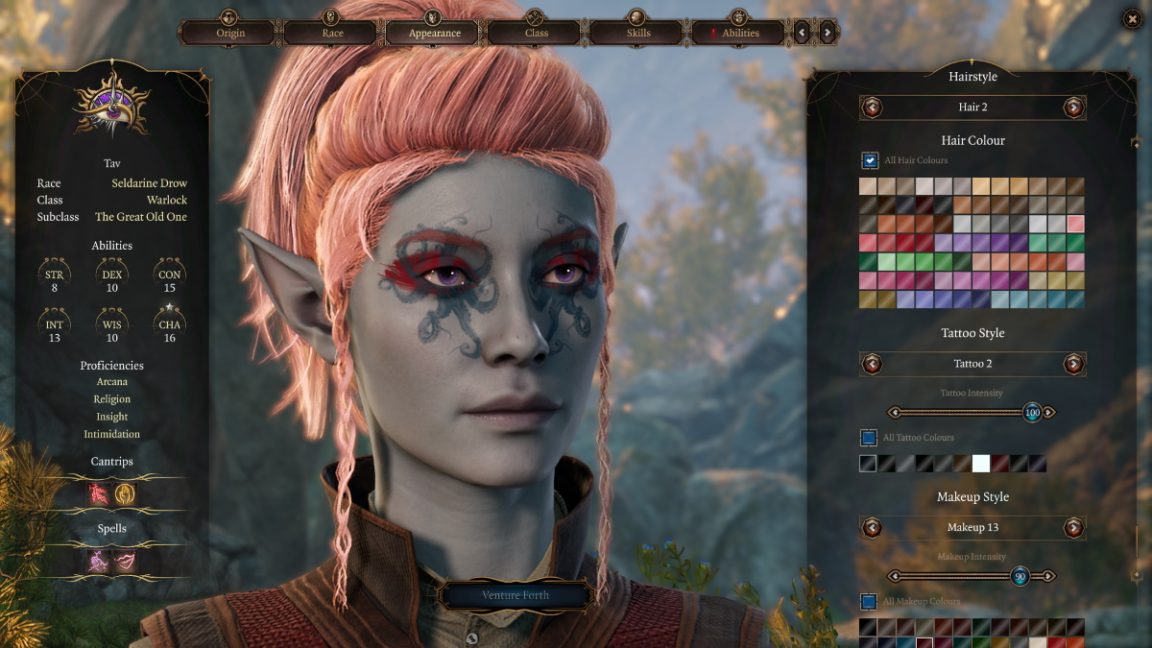 There are six main classes in Baldur’s Gate 3, but some have subclasses to them too. They are your standard archetypes for a fantasy game, initially quite self-explanatory, but can hold deeper choices depending on the gods they worship or through simple latent abilities that come with a class.

With no subclasses, the Fighter is here to do one thing… fight. It may appear to be an easy option that takes away meta choice at this early stage, but everyone needs a tough, armoured, no nonsense brawler on their side.

Again, there’s no subclasses for the Rogue but they specialise in speed, dexterity and skill, with quick attacks or just being generally light of foot and swift to react.
Cleric

Cleric’s represent the Gods they worship, and wield magic reflective of those deities. There are also 19 deities to choose from depending on your allegiance and this will again influence those around you, the way they react to you, and other options later in the game.

Deception and illusion magic is peddled by the Cleric in the Trickery domain subclass. Handy for rogue, evil or just selfish play.

Life Domain is the really good Cleric choice, dedicated to protecting and restoring the health of itself and others.

Clerics of the Light Domain are all about justice and the law, and they use magic that pushes back against darkness, evil characters and are particularly great allies against the undead.

Rangers don’t have a subclass as such, but as they are at one with the natural world around them, they can pick a couple of perks. They can choose to be more proficient against a particular enemy – this Preferred Enemy option gives them the upper hand against one of the following; spellcasters, thieves, wild beasts, enemies from another plane or heavily armoured foes. On top of that, Rangers also get to choose resistance against Poison, Fire or Cold, or be a Beast Tamer or an Urban Explorer with the Natural Explorer option.

The Wizard doesn’t have a subclass but it’s the perfect class for someone who wants to try their hand at multiple spellcasting and magical experiences. With nine spell slots to begin with, there’s a lot to play and experiment with. If you’re looking for fun and surprises, the Wizard is a good choice.

The Warlock who pledges allegiance to The Fiend goes down a dark path of corruption and deals with spells focused on death and destruction.

Dedication to The Great Old One means this Warlock seeks to control the minds of others. Great for manipulating people and conversations.

We’ll add more to this Baldur’s Gate 3 race and class guide over the coming days. If you’re struggling with some crash bugs during Early Access, there’s a hotfix on the way.