Four new photos from the Witcher Netflix series have been published online ahead of its highly-anticipated launch later this year.

Details about the show have received quite a mixed response from fans so far. Consider the infamous short video during which Henry Cavill drank a decoction, and an army of very upset Twitter folk marched ferociously into hashtag trending words blazing, citing his quite-clearly-not-the-actual wig as a riposte against all things good in the world of The Witcher.

However, fans on Reddit seem at least marginally happier with the new material, which you can see below. 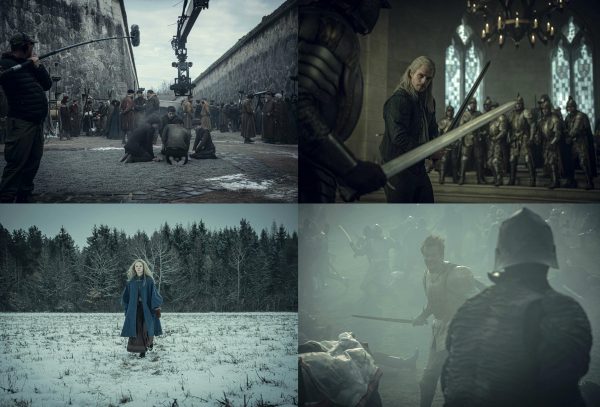 It’s a little unclear what’s happening in the top-left photo. If anything it just looks like ordinary folk are congregating for a chat, and somehow cameras and microphones have magically been invented on The Continent, likely having mysteriously emerged as a byproduct of the Conjunction of the Spheres. Top-right shows Geralt with a big sword surrounded by angry looking armor-wearers, who he’ll probably beat up by twirling around like a windmill with serrated sails.

Bottom-left is Ciri, alone in a forest, perhaps on the outskirts of Brokilon if early Witcher literature is anything to go by. Seeing the weird majesty of Brokilon visualized will be a treat for series vets and newcomers alike. Bottom-right is a battle, which is good, because battles are good. Most of the time.

Despite this wave of new Witcher photos, very little has been revealed about The Witcher aside from the fact that it’s slated for a late 2019 release, with a potential leak pointing specifically towards December 17. Given that it’s already late October, it’s probably going to spontaneously explode at some point in the near future and hurtle headlong towards launch before anyone even realizes what’s happening. Not a bad idea given how angrily people responded to showrunner Lauren S. Hissrich once they realized that Geralt only had one sword (the other is likely on Roach, which true fans, aka readers, already knew).

Will there be a rumble between book-lovers and gamers by the end of the day? #Swordgate2019

Oh, and we also know it will have a bathtub scene. While you’re waiting check out Jeremy Peel’s excellent piece on how the first Netflix trailer perfectly captured Geralt’s most relatable trait: reluctance.