Resident Evil 2 once again provides the backdrop, this time in a new terrifying scenario which sees Mr. X replaced by the goose from Untitled Goose Game. The modder tweeted a GIF of the work-in-progress, which shows a giant, fedora-wearing Untitled Goose lift a crashed helicopter and begin pursuing Resident Evil 2’s Claire Redfield. And it’s perfect. Look upon the goose and despair below:

The final product will include “extra honks,” says its creator. And likewise, the Mr. X inspired fedora will be staying. But so far there’s no word on when we might see the full version, so you’ll have to whet your appetite on GIF replays.

Resident Evil 2 has a fabulously creative and horrifying modding community. The Mr. X/Thomas the Tank Engine makeover released earlier this year is an unholy union between a Thomas the Tank Engine model by ZombieAl and a second mod by DJ Pop which replaces Mr. X’s theme song, stomping, and punch sound effects with Thomas’ theme song, steam train sounds, and his haunting whistle. DJ Pop is also responsible for the X Gon’ Give It To Ya mod that automatically plays DMX’s X Gon’ Give It to Ya song over Mr. X encounters. 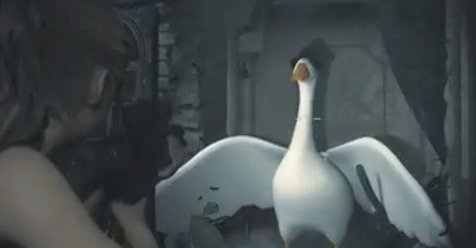