There’s a new Exotic Trace Rifle available in Destiny 2: Shadowkeep, but you’ll need to take part in the Garden of Salvation raid to get your hands on it.

The Divinity Exotic Trace Rifle comes with a few caveats you’ll need to complete before you jump into the raid. Props to the Guardians over in the Raid Secrets Reddit for figuring this puzzle out.

The first thing you need to do is visit the Lunar Battlegrounds on the Moon. Exit Sorrow’s Harbor from the south and turn left at the area where you capture the nodes in the opening mission.

You’ll reach a Vex gate and will need to defeat all three waves of enemies for the What’s this… What’s this? Exotic quest engram to drop.

How to get the Divinity Exotic Trace Rifle

Now that you’ve got the Exotic quest, you’ll need to go to Nessus and visit three Lost Sectors, namely The Orrery, Ancient’s Haunt and The Conflux.

The Orrery is in Artifact’s Edge. Before you reach the main stairs to the boss, jump up to the ledge on the left to find a narrow passageway with Vex enemies at the end. There will be a white oracle inside, so go ahead and interact with it.

After that, it’s off to Ancient’s Haunt in The Tangle. You’ll find another oracle glowing in a cave to the left midway through the Lost Sector.

The final oracle can be found in The Conflux in The Cistern. About midway through, you’ll need to jump up onto the main pillar in the centre of the room, then jump to your right to a small opening in the wall.

It’s about eye level to the centre structure, but quite easy to miss if you don’t know where to look. After interacting with the third oracle, the Defragmentation quest step will now be available.

This step requires you to get 120 Decryption Core Fragments from killing Vex on the Moon or through the Vex Offensive. You might have had a few already, but completing a run of the Vex Offensive is the easiest way to complete this step quickly. After that, you’ll need 30 Phantasmal Fragments, which you can get from Nightmare enemies or Eris Morn in exchange for some Helium Filaments.

Once you’ve got your 30 Phantasmal Fragments, buy the Empowered Decryption Core from the Lectern of Enchantment, form a fireteam and load up the raid.

How to get the Divinity Exotic Trace Rifle – raid puzzles

Your quest should have updated to Key to Divinity and you’ll be ready to jump into the raid. It’s not clear whether this can be done over a few raid attempts or in one go, so for now, it would be best to aim to do it in one run with a few buddies.

These puzzles are quite tricky, so check out Datto’s video guide if you find yourself getting confused.

Once you’re inside the Black Garden, turn around on the spot and head towards the edge of the map. Jump off the edge and spin around to face back into the map and you should see an opening in the cliff edge. Jump through the hole and head inside, activate the node the head back up to start the raid.

The first puzzle is before the first encounter. Head up the staircase and then turn around to find two alcoves on each side of the half-circle structure. When facing the stairs, the alcove on the right is the start point and the one of the left is the finish point.

The goal here is to tether the left to the right. Have three people in the left alcove and three on the right. You’re looking to create a zigzag pattern, connecting a tether between two players who can see each other through little windows in opposite alcoves. You’ll know it’s worked when the message Accepted: singular security bypass shows.

Defeat the boss in the first encounter and after you’ve looted the chest, turn around and drop down to your right from the centre pink flower platform. There is a tiny cave to drop down into beside the spindly tree with pink leaves. You need to chain the tether between players again for this next puzzle. The area you drop into is the end of the chain, so assign three people throughout the area to get it to tether properly.

Leave one player in the area you drop into and the rest of you can go through the little hole in the wall. Another player can stay in the room to the right under the crawlspace, with another around the corner to the left.

The other three players can now jump down the hole but instead of dropping straight down can jump over to the platforms above. Follow the path to get to the three nodes, and remember to look for lower-level crawlspaces to slide through.

You’ll see a node on the wall to the left and one through to the right of the barrier. The last player can follow on from the first node until they see the outside, where you’ll go through a crawlspace to the left. From there, stick to the right until you find the node.

Player five can head outside and take a left, jumping across the platforms until you get to the big cave then head inside to find your tether point. Get in line of sight of each other and get ready to tether.

Once you’ve completed the puzzle, you’ll see the Accepted: singular security bypass message again and you can head outside and climb back up the wall to progress through the raid.

Carry on until you reach the dark platforming section of the raid. Jump over to the right until you reach a large branch with giant pods on it that you can shoot. Again, you want the tether to hit all of the nodes, which will appear when you shoot the orange box.

Have one player next to the orange box, and another two players on the platform to the left of the big branch and another three on the long branch itself. You’re looking to form a tethered circle of sorts. You’ll get another message saying it’s complete, so carry on through the rest of the raid. 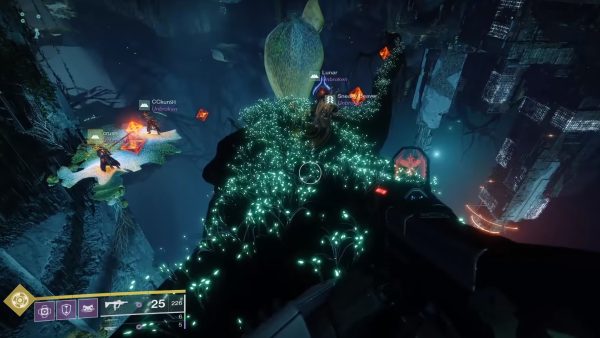 The next two puzzles come after the third encounter. You’ll see an orange node appear to the west of the jumping puzzle, just below the platform edge. Again, you’re forming a tethered circle with the aim of joining all the nodes together, so try and move in unison to keep the circle together.

You’ll need to be tethered together to cross back over the jumping puzzle, but there are some stairs you can go up to cross the way without jumping. Keep going until you can turn to the right and head down that passageway. Supplicant Harpies will spawn and you need to get them to self destruct without killing anyone. Edge forward then back away as a group to get them to explode away from you, then link yourselves up around the nodes to look like a bowtie to complete the puzzle.

Climb the wall and you’ll be ready for the next puzzle. Head towards the waterfall and you’ll find a cave in between them. The start node is down a path to the left, so shoot it to spawn the end node which appears near the entrance. The tethers here have to be as long as you can make them while still maintaining a line of sight. Link them up and move on to the final puzzle.

The final puzzle is where the last puzzle began, in the cave. There will be six plates on the ground with white objects floating above them. When you chain everyone together to start the puzzle two nodes will appear. These nodes will make a pattern on the ground that your team needs to replicate very quickly.

Assign numbers amongst yourselves that correlate to a plate and stand in order. Datto recommends that the plate in the top right corner is Plate One and the one opposite Plate six, to give you an idea.

So, Plate One needs to join to the starting node, work straight down to Plate Three, across to Plate Four, back up to Plate Six and over to the end node. Look out for the white line drawing a pattern and line yourselves up accordingly. Datto’s video showed a zig-zag pattern, so move accordingly to match the beam while remaining tethered. 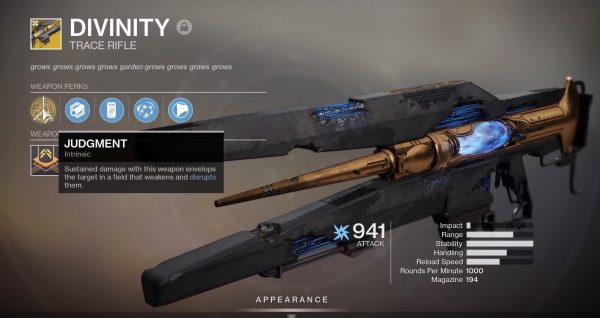 You’ll repeat this seven times before the challenge is complete. Defeat the final boss and you’ll finally receive the Divinity Exotic Tracer Rifle. Its Intrinsic Perk is Judgement, where sustained damage with Divinity envelops the target in a field that weakens and disrupts them. With its trait, Penance, targets under the effects of Judgement long enough are struck with a burst of damage.