Doom is an unholy trinity of trash sci-fi, jagged Eldritch landscapes and sorcerous, blood soaked beasts. Existing some place between Hell and the pitiless void beyond Mars, its occult planes have always been lonely and surreal.

When Doom effectively invented the first-person shooter genre in 1993, it also served as a canvas for legions of tenacious modders. Back then, the community traded floppy discs containing all new, selfcrafted game packages. Known as Doom WADs (Where’s All The Data?), they heralded the dawn of PC game modding as we know it. This community has multiplied over the years, and continues to create via the original Doom titles.

Some build for the sheer creative thrill of it; others to push at the limits of a classic game engine; more still, just want to pet the dog. For many, Doom served as a surreal initiation into game design.

Pop culture mods tend to be the most well known outside the fan-base, such as ‘2002: a Doom Odyssey’, or games based on the likes of Seinfeld and Pokemon. Other creators veer more toward outrightly insane offerings, like ‘Run For It’: in which in-game objects sprout thin, pale limbs and and promptly dash away from you.

The whole absurd setup adds mechanical novelties, too. Watch helplessly as your bright blue projectile shots grow legs and hightail it across the plains. It’s also the only game I know of where explosive barrels skip gleefully in and out of your line of fire.

Conversely, there are Doom WADs that may cause you to question the very nature of reality. Creepy, wild places that couldn’t exist anywhere else except inside Doom’s blocky, cursed architecture.

While how effective they are at communicating the deeper themes troubling humanity is questionable, one thing is certain though: exploding giblets are not always the main draw in Doom WADs.

The sheer vastness and madcap vision behind these games sometimes straddles that space between utter mess and deftly realised artistic creation. 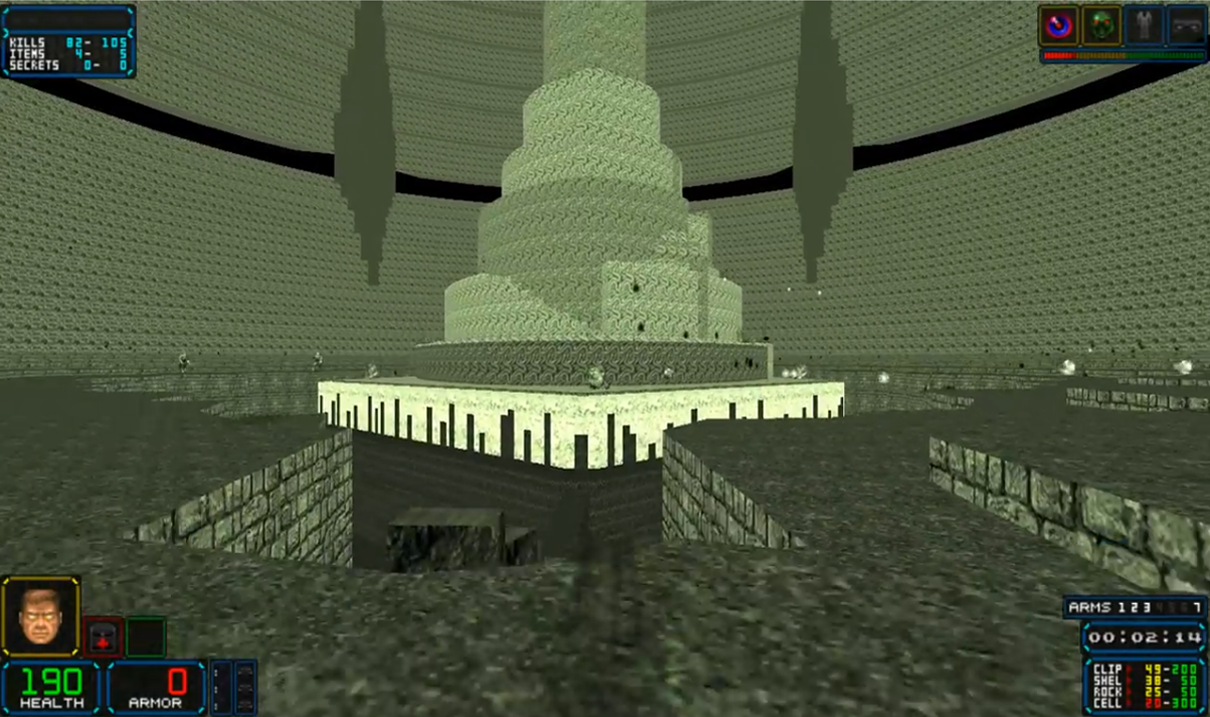 A psychedelic odyssey straight into the heart of darkness (and then some), it’s set in the aftermath of a plane crash. A brief readme.exe at the start of A.L.T informs you of a “strange portal in the cargo compartment”.

Starting on the plane, you are immediately greeted with a dead visage of yourself. If you look in the right place, you’ll see the Hell portal itself, carved out of lava rocks, the words “Absolute Life Transformation” scrawled in fire.

Later on, you watch yourself fall out into deep space, buoyed on by turbulent flames. There’s a quick flash of black, and inexplicably you land on solid ground. From here-in, you transport between worlds, that flash of black a signifier that you’ve teleported through.

From glimmering disco hellscapes to strange floating voids, A.L.T takes the iconic aesthetic of Doom and transforms it into something far more unsettling.

As you loop between realities, you see your doppelganger die, time and time again.

The safe and familiar is turned inside out in a nightmarish attempt to break your understanding of the game. Familiar assets are repackaged as mis-shaped shadows of their former selves throughout a series of increasingly disjointed and disconcerted levels.

At the end, your character opens the door back to the beginning: the realisation of an eternal cycle dawning on him, as he prepares himself to live it all once more.

There is an uneasiness to A.L.T, that lingers after playing. A mysticism surrounding the cycles of death, rebirth and oblivion.

Doom’s occult aesthetic, replete with flaming pentagrams and torn up bodies, is somehow more convincing in A.L.T. This comes less from the abundance of sacred geometry flung about the place and more its overall tone.

You see, A.L.T is not afraid to screw with you. It doesn’t care if you don’t complete all its content or unravel its secrets. It loves leaving you in the dark. With some mods this might feel like amateur incompleteness, with A.L.T, it’s definitely a design choice.

If A.L.T was a person, it would be an unknowable shadow, pointing out with one crooked finger into the void, smiling “Go.”

While A.L.T is perhaps the most unhinged of the Doom WADs I’ve come across, the gorgeous Ancient Aliens WAD is the most accomplished.

Inspired by the History Channel programme of the same name, Ancient Aliens is an award winning, kaleidoscopic medley of delightful WAD nonsense.

If you’ve not seen the Ancient Aliens TV series, it features a wild haired man (immortalised via a meme) theorising how alien lifeforms are responsible for all ancient technology. Stonehenge? It was the aliens, man. The pyramids? Aliens, obviously. Show this guy a chalk scribble of a cow, and he’ll point out its mothership.

The Ancient Aliens mod is a satire on pseudo science, and the misappropriated cultural lore that ties into the dubious Ancient Astronaut myth. You take spirit journeys and discover artefacts. There’s a grand conspiracy to unravel. 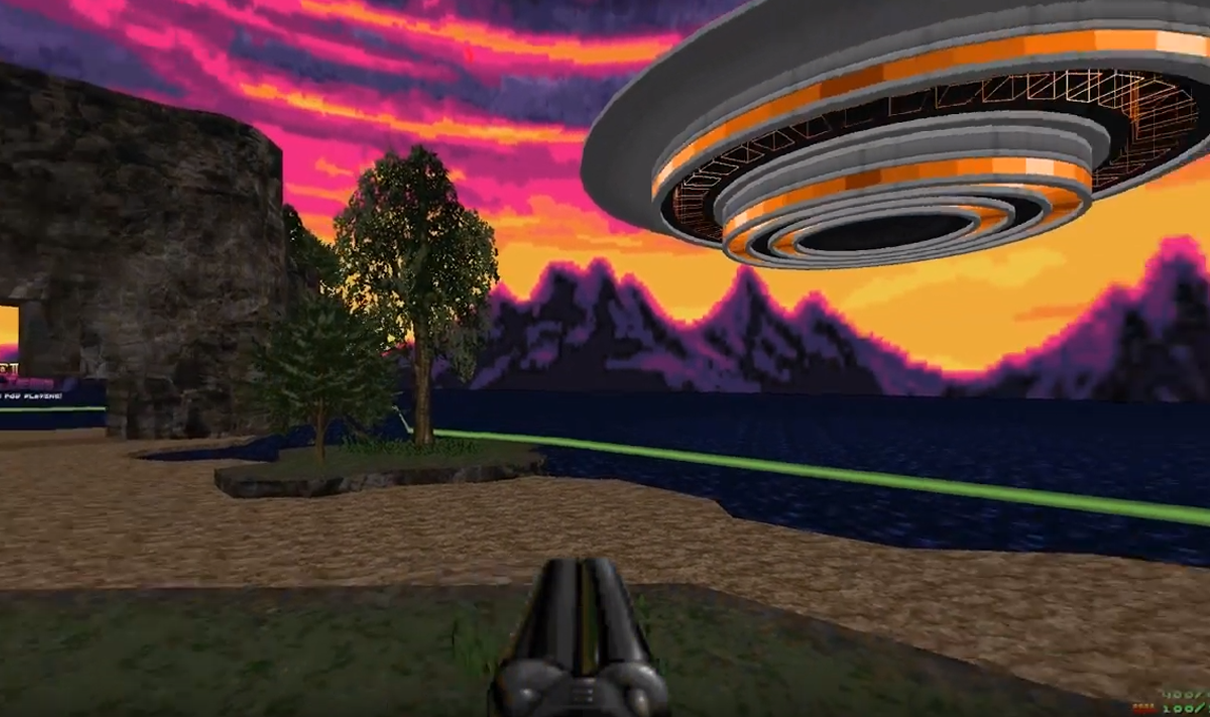 As I explored these far-out mods, it occured to me that virtual spaces, are for the most part limited by what we’ve already seen: what sells, what’s popular, and what keeps players hooked.

This is all well and good, but it leads me to wonder if these red-hot opuses, these amateur realms of things repurposed, are the closest to truly original offerings we have in the games world – in the sense that they are unlimited by expectation, or a desire to be understood, or even a need to build an audience.

A.L.T and Ancient Aliens want your curiosity, and your play-time, and very little else. They manage to create distinct and unique experiences from the constituent parts of something else. They possess a vision that does not change based on expectations. There’s a real purity in that, as disjointed as these efforts can be.

These WADS aren’t just mods, they’re unfettered journeys into other worlds, rustling beneath the skin of Doom. They are unafraid to be subversive and strange and all the wonderful things that come along with that.