Nostalgia is a hell of a drug – but luckily, Crash Team Racing is as excellent a kart racing experience now as it was in the nineties. No rose-tinted glasses required.

Once Activision suddenly rediscovered the popularity of Crash Bandicoot and Spyro the Dragon, the return of Crash Team Racing seemed pretty much inevitable. Arguably Naughty Dog’s best title for the original PlayStation, this kart racer has it all: handling to rival Mario Kart, a distinct attitude and style to match Sonic’s racing efforts and a fleshed-out single-player Adventure Mode that copies the structure of the excellent and now oft-forgotten Diddy Kong Racing. 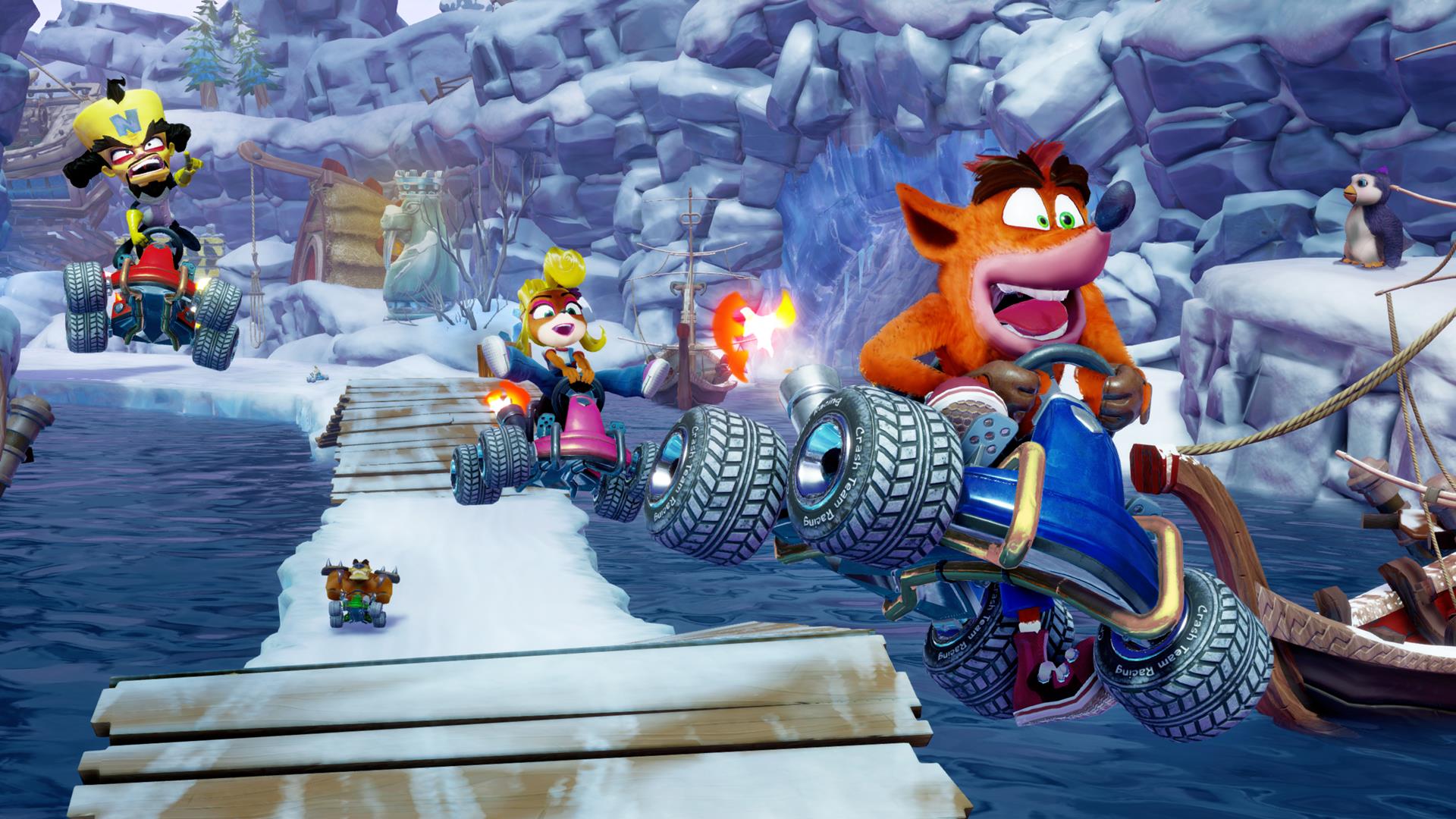 I’ve seen Crash Team Racing Nitro-Fueled referred to as a HD Remaster, and while that’s technically true like the re-releases of the Crash and Spyro games before it, that doesn’t really do it justice. This isn’t a visual filter, higher resolution and some sharpened textures like you might get in some remasters. Instead, every visual element you see has been rebuilt and redesigned for modern hardware, and the result is actually mind-bogglingly gorgeous.

The designs of the characters of Crash were so over-the-top in part because of the limitations of the PS1 hardware. Things had to be big and stand-out to pop on that hardware. All of that translates beautifully to a modern high-definition environment – these deliberately over-blown character designs pop in high definition in a really striking way. I recently reviewed Sonic Team Racing, another colourful and thoroughly enjoyable kart racer, but the style of that game is generally nowhere near as distinctive as the designs here.

Some of CTR’s systems have likewise aged brilliantly; the basic mechanic of power sliding to build up a bonus boost is present in pretty much every kart racer going, but in CTR the system is an absolute stand-out. It’s surprisingly interactive and tactile, requiring players hold one button and steer before hitting another button in the right timing to gain the boost. The tighter your timing, the better the boost.

Mastering the power slide and boost requires a great deal more concentration and dexterity than in Mario Kart, and feels like the sort of feature that’ll define competitive races. Beyond that, it also defines CTR in general, with the way this system forces you to take corners spilling over into every aspect of the game’s design and how you race. Describing how a game ‘feels’ to play is always a nebulous concept, but the handling here can be summed up in one word: tight. And another: satisfying. 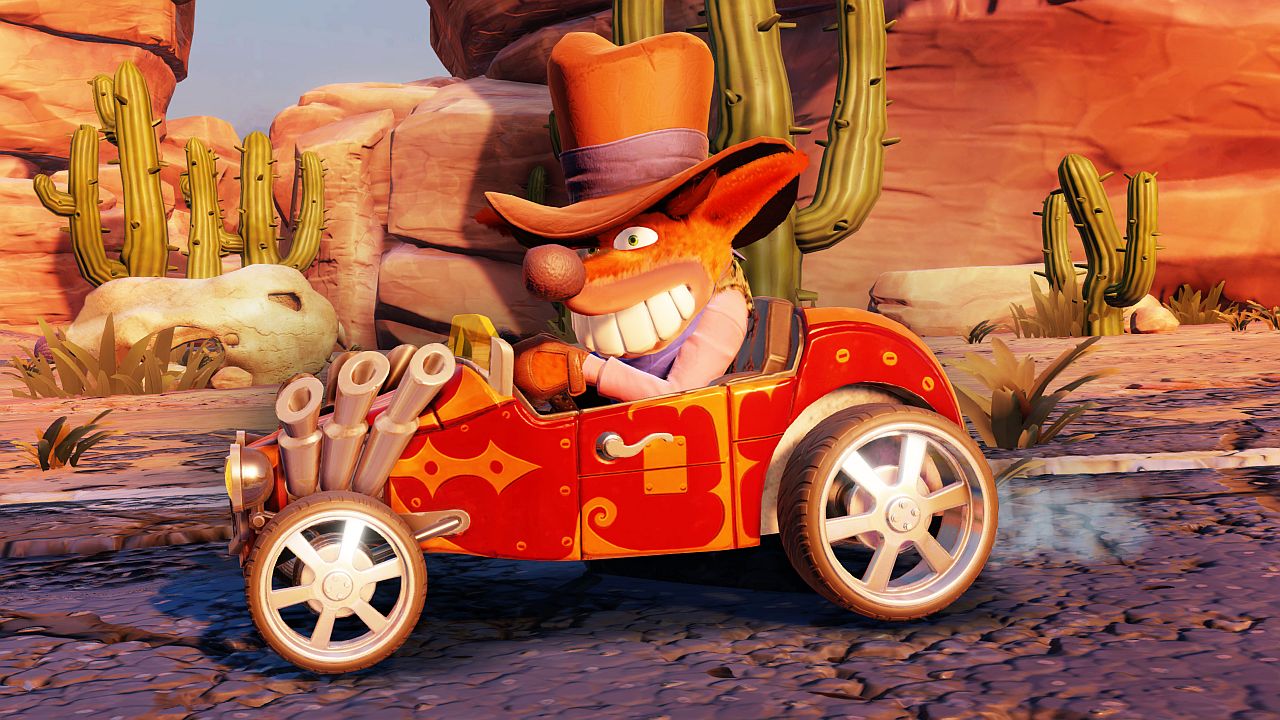 Mastering the art of a tightly-timed CTR drift will be vital if you want to stand a chance in the game’s Adventure Mode. Rather than a series of ‘cups’ or races connected by story sequences alone, Crash’s Adventure takes from Diddy Kong Racing and drops the player into hub worlds that you drive around, entering races and tracks in a sometimes nonlinear order. Diddy Kong Racing nicked the concept from Mario 64’s Castle, then Crash grabbed it from there, but it’s as strong a concept in this iteration as in any other.

Each level presented isn’t just a race, either – once all have been completed and that world’s boss smashed, you can head back into races for other challenges like time trials, collectables and hidden unlocks. Alternatively, you can just continue to the next world to wind your way towards the final boss.

Adventure Mode is largely as it was presented in the original game, but does come in two flavours: classic functions exactly as it did on PS1, with one pre-set difficulty level and only Crash himself playable. The new Nitro-Fueled mode allows you to play as any character on the roster and features three distinct difficulty levels. Adventure Mode isn’t really the reason to buy this game, but it’s a perfect introduction to the mechanics and tracks of the game before you get into the meat of it: competitive play.

Before I talk about playing against other humans it’d be remiss not to at least touch on the difficulty when racing computer-controlled players. I’m not sure if this is simply being spoiled by modern racers with more nuanced difficulty settings, but the standard medium difficulty in adventure mode often felt frustrating: at medium, the default, it often feels like the AI deliberately gangs up against you, the player, even when you’re not the greatest threat to them. This is often the case in kart racers (blue shell, anyone?) but sometimes it’s hard not to feel a little cheated as multiple items drop you from first to fifth in the final ten seconds of a race. 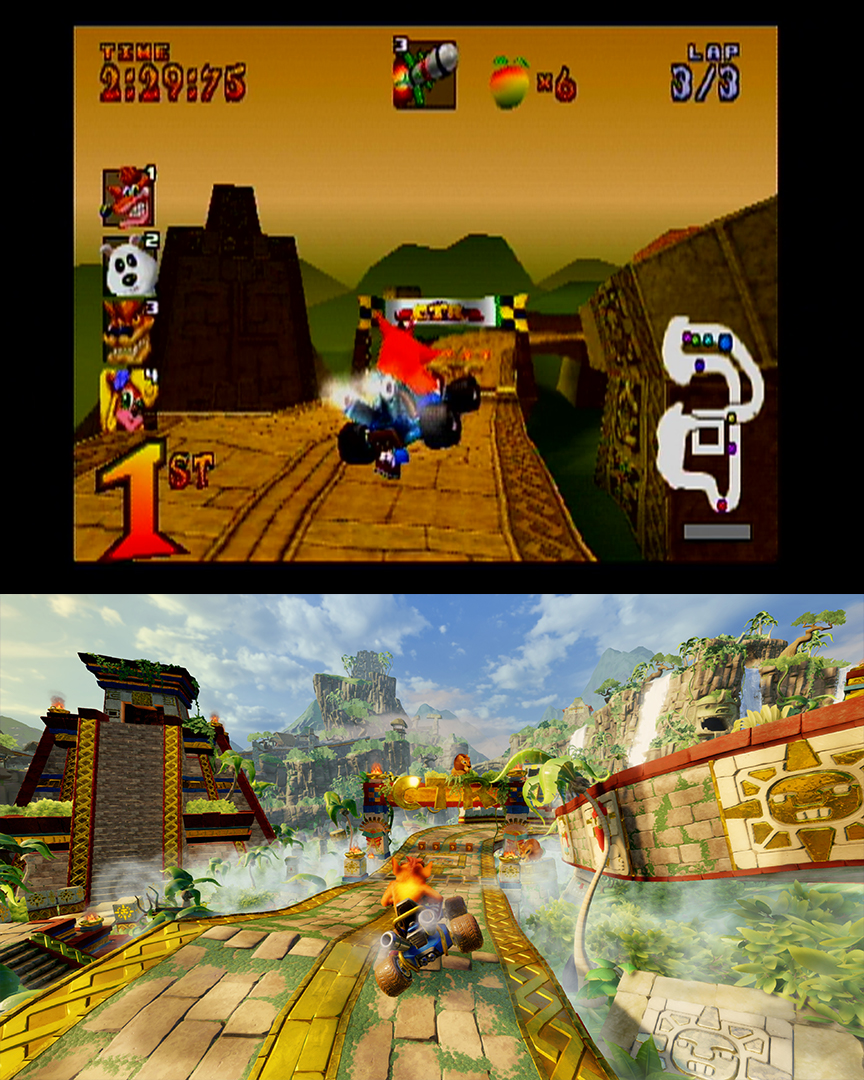 Here’s a comparison between the original and the remaster, if you need convincing.

Crash Team Racing is better experienced with friends, then. Four player couch co-op is a blast, with the AI-driven problems of racing alone disappearing as you play with real people who’ll make more natural decisions about the race. There’s online too, but in a pre-launch setting we’ve been unable to test it. Assuming it runs relatively lag-free it should be just as much fun as the offline multiplayer – but you’ll surely want to practice your drift timing before heading online lest you get embarrassed.

The good news is that while multiplayer is really this game’s raison d’être, there’s still plenty to do between matches and to build up your racing skills. There’s an in-game currency used to purchase cosmetic customisation options for karts and characters, and that too links in with online: you might want to grind out solo races or adventure mode unlocks in order to build up the currency to buy a sweet, show-off skin. It all links together nicely.

That’s Crash Team Racing, then. Nostalgia might well have carried this one through, but in truth it doesn’t need it: this is a great game that has for the most part aged remarkably well, with the visual upgrade and other tweaks serving to make absolutely certain it’s worth the price of admission; I just wish the AI didn’t sometimes feel so cheap. It’s rare that a game can be as good as it was 20 years ago in a modern re-release – but this classic kart racer manages it.