There aren’t many video game franchises that can make a big deal out of the inclusion of heavy warehouse machinery, but Shenmue is one of them.

It’s the news that every Shenmue fan has been waiting to hear – no, not that they’ve fixed the still dodgy-looking faces in Shenmue 3 – but forklifts are back for the third entry in Ryo Hazuki’s adventures.

Shenmue has always been a series that revels in the mundane, and as we reported last month Shenmue 3 looks like it won’t be any different, taking time to put on elaborate, carefully staged training sequences and allowing for methodically-paced exploration of a realistic recreation of a particular era and location. That’s part of the charm, and a huge element in the first Shenmue game was how Ryo could undertake a part-time job as a fork lift driver in order to get together the cash to fund his revenge quest. 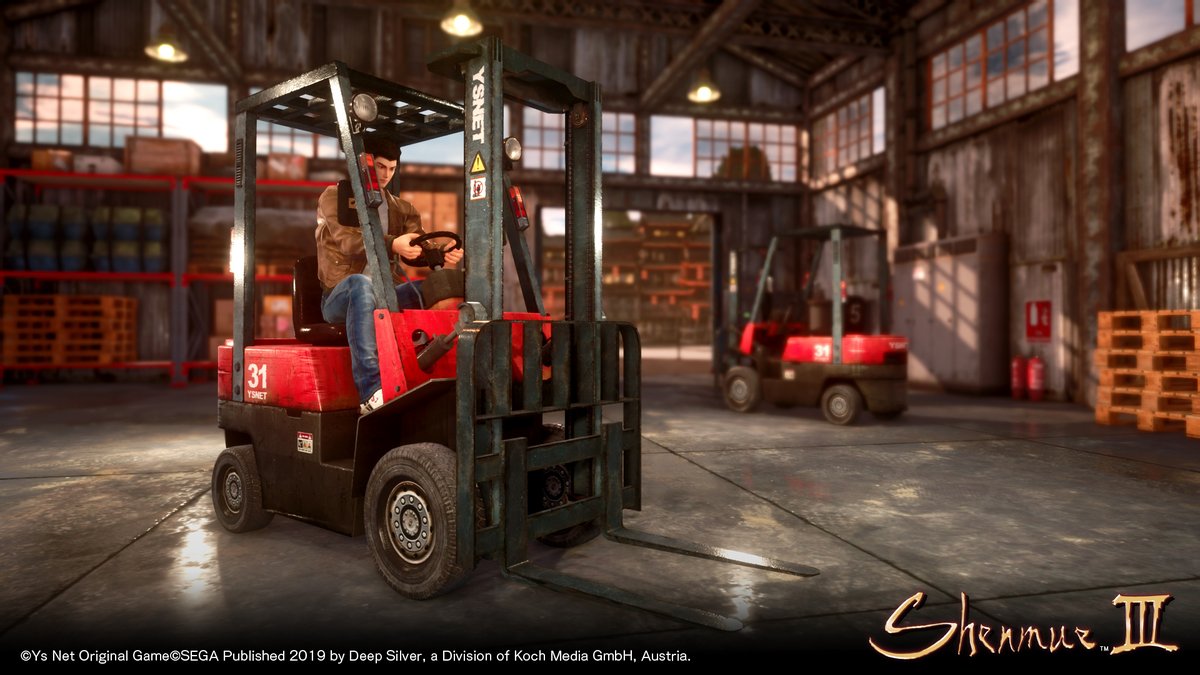 It was a silly little segment of a game that was quite big on that sort of thing in general, but it became a fan favorite section of the game. As well as actually completing jobs ferrying boxes around the Yokosuka Harbor as the catchy music burned itself into your brain, the original Shenmue also used the forklifts for mini-game fun, allowing players to race against their colleagues after a hard shift shunting boxes around.

In Shenmue 2, forklift driving was replaced with other part-time job mini-games including managing a street gambling stall and moving boxes around by hand – and fans missed it. It became synonymous with the series, even – when Ryo showed up as a playable character in a Sega kart racer, he drove a forklift. When days before E3 2015 Shenmue creator Yu Suzuki tweeted a photo of a forklift, fans knew what it meant: Shenmue 3. Now we know the game will actually see the return of the forklift, as revealed on Twitter by publisher Koch Media.

#Shenmue fans are never in a bad mood. Why? Because something always will be able to lift them up! Take a look at the #Shenmue3 forklift. pic.twitter.com/GKrrEg5n25

We knew Ryo would be able to take on part-time jobs in Shenmue 3, and it appears that this will be one of them. It was always plural, however – jobs – so we seemingly still have some more to learn about, which is exciting. It wouldn’t be surprising to see most of the past part-time jobs and mini-games return, as Shenmue 3 certainly seems like it’s aiming to be a nostalgia-heavy greatest hits package.

If you simply can’t wait for Shenmue 3’s release later this year, check out our hands-off impressions from last month and our interview with Yu Suzuki where he even muses on the prospect of a Shenmue 4.