The Destiny 2: Forsaken three-weekly reset has arrived and the Festival of the Lost now has a start date.

Bungie has previously released a 12-month roadmap of what we can expect from Destiny 2: Forsaken, such as the inclusion of the Festival, an ever-evolving Dreaming City and various endgame experiences.

Bungie has released more details about its upcoming Festival of the Lost which will feature a Haunted Forest, a quest to find Master Ives and a costume party! 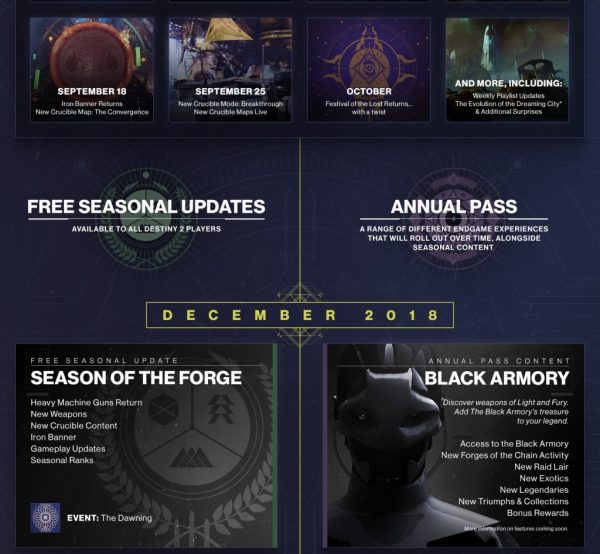 Amongst the many rumours about the upcoming changes to Destiny 2: Forsaken is one from Reddit user AnonTheNine, who claims that the Last Word Exotic hand cannon and Thunderlord Exotic machine gun will be making a comeback in Destiny 2: Forsaken. This user posted accurate information about the new supers and map locations in Forsaken shortly before E3 this year, so whilst these are only rumours, he’s been spot on before.

Given that the raid is called the Last Wish, and our Guardian had the last word over Uldren Sov, it would be pretty fitting to bring the Last Word back into circulation for Forsaken. It’s fast rate of fire and high impact would make it a lethal addition to new Gambit and Crucible modes. Thunderlord was a frenzy in itself and it definitely has a place in Forsaken, given the Taken’s penchant for swarming you.

The Season of the Forge and Black Armory begin in December and bring with them the return of The Dawning, new Crucible content, and the introduction of heavy machine guns into Destiny 2: Forsaken, so we might need to wait a little longer to see Thunderlord in action. A gif from the Bungie community manage’s Twitter account showed a weapon that looked suspiciously like Thunderlord, so watch this space.

We’ve already had a few Destiny 1 classics make a comeback, such as the Lord of Wolves Exotic shotgun, so it isn’t unrealistic to expect a few more heralded Destiny 1 weapons reappear.

As we said, two new PvP modes have been introduced since Forsaken was launched, namely Gambit and the Breakthrough mode for Crucible. This same Reddit user predicts that a new Horde mode would be coming with the Black Armory annual pass content, where the longer you survive, the better the loot you’ll get.

A new raid lair has been promised for Black Armory and a new Gambit mode follows in Joker’s Wild, so we might not see this mode for quite some time but again it fits in with the slightly more frantic and competitive nature of Destiny 2: Forsaken.

Again, we need to stress that these are only rumours so far, but ones we’re excited about nonetheless. If you’re looking to score some Exotic weapons in Destiny 2: Forsaken or find that third Seed of Light before the game resets for the week, check out our ultimate guide here.