An in-game event for Call of Duty: WW2 will begin next week leading up to the release of the next DLC drop, The Resistance.

A free, in-game event for Call of Duty: WW2 will kick off on January 23 and run for five weeks.

The event features free content, available to all players, such as the new Resistance Division, new weapons and uniforms used in uprisings. The event includes limited-time game mode events and rotating 2XP playlists across multiplayer, War Mode, and Zombies.

Those who join the Resistance Division will find the Tactical Knife Skill, a new 9mm SAP Pistol, as well as other useful skills. This includes the ability to scramble enemy maps.

Prop Hunt is the features game mode, requiring players to “master the skills of stealth.” During the event, Prop Hunt tasks players on one team with disguising themselves as everyday items strewn throughout the war zone. The other team will try to track them down. It’s considered a “fun party mode,” providing players with a “break from the core modes.”

Another featured game mode is the classic Call of Duty mode Demolition. Here, Resistance fighters are tasked with placing bombs behind enemy lines. Players will need to spearhead an assault, plant a bomb, and defend it until the end.

Those who log-in weekly will be handed a free Resistance Supply Drop. Here, Call of Duty: WW2 players should visit Captain Butcher at Headquarters to grab their present.

Finally, be sure to unlock the limited-time Resistance-themed Collection Rewards before the event ends on February 27. Doing so will earn the player special Resistance-themed variants of the Orso SMG, the Volkssturmgewehr Assault Rifle, and the Combat Knife.

Once the Resistance Community Event ends, the weapons will no longer be available to unlock, so players will need to grab them before the event ends and Butcher goes off on his merry way.

You can see the complete schedule for The Resistance Community Event below. 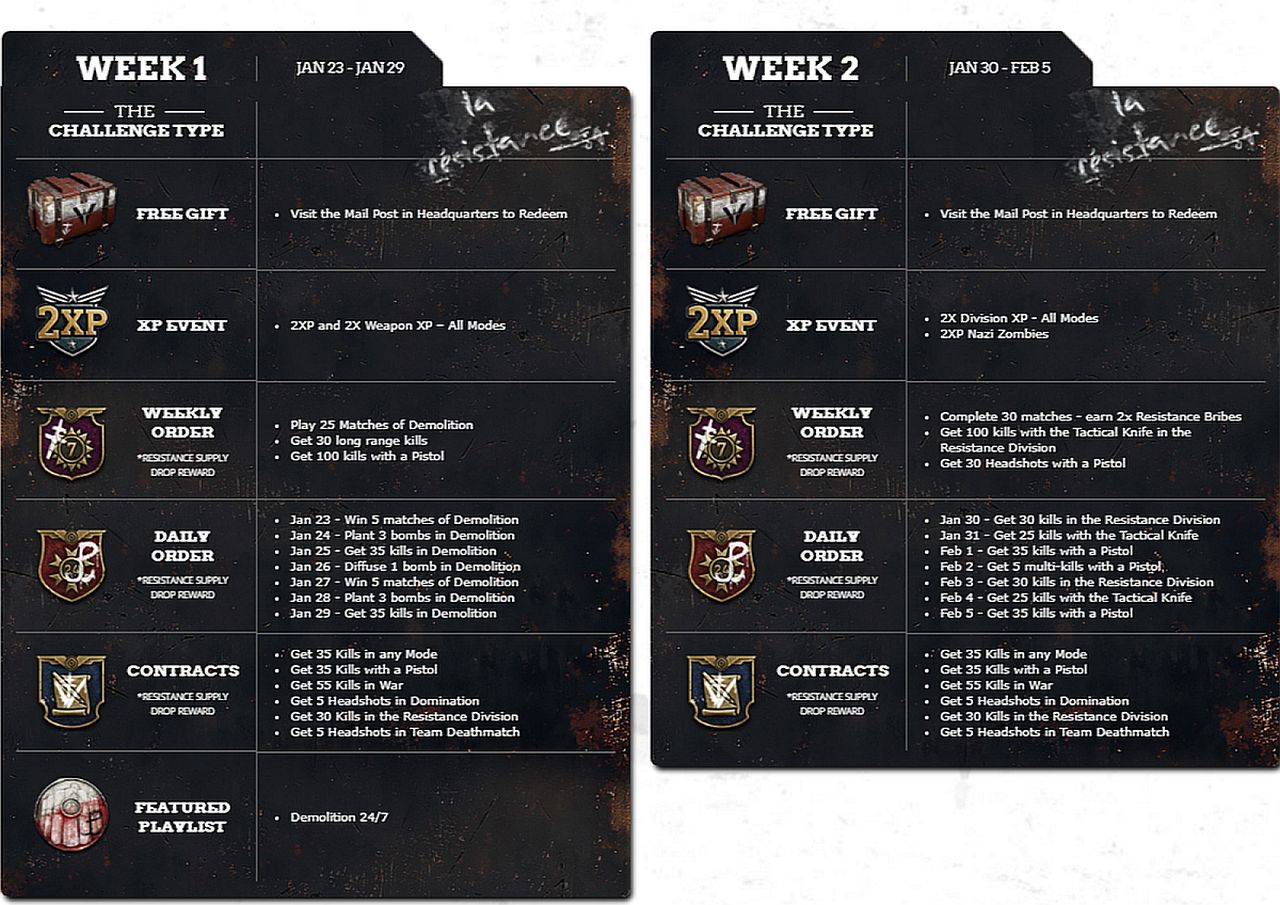 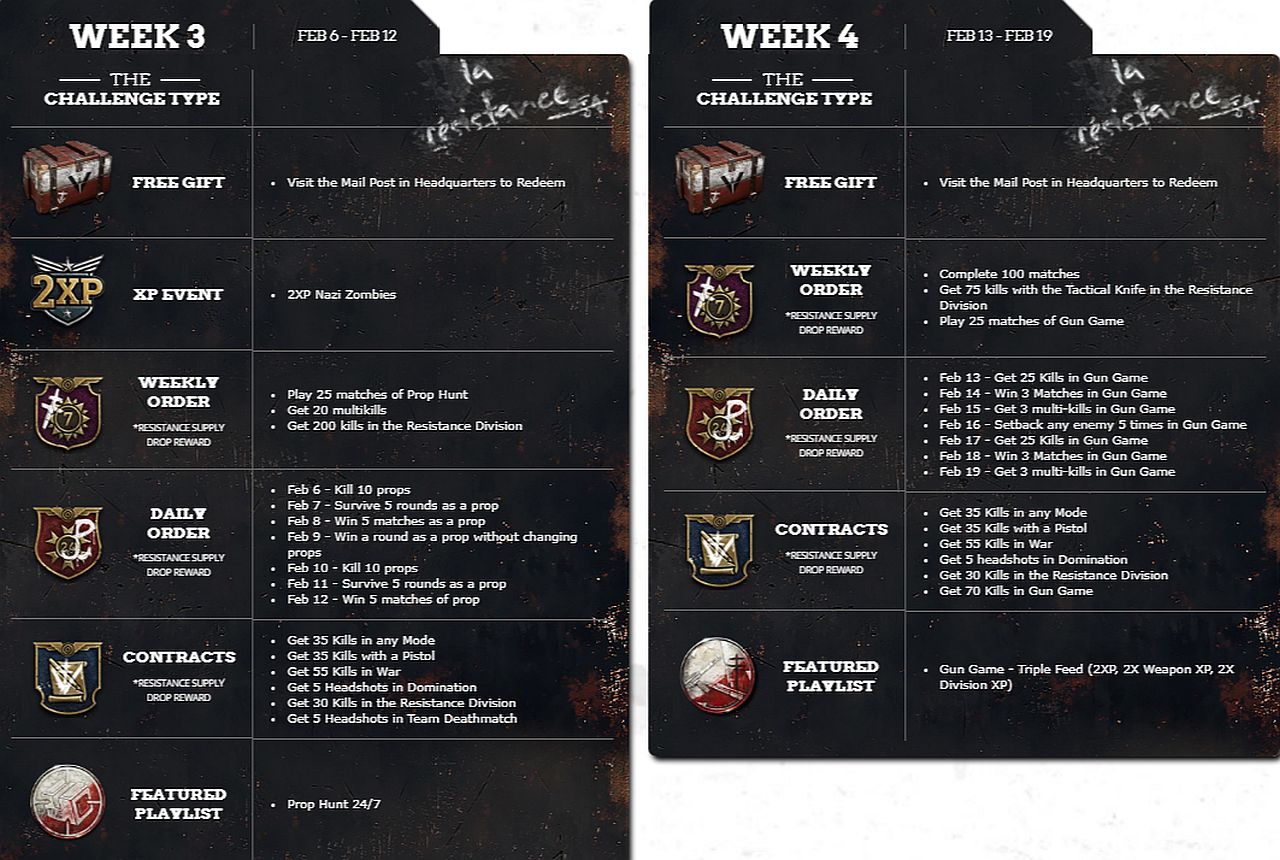 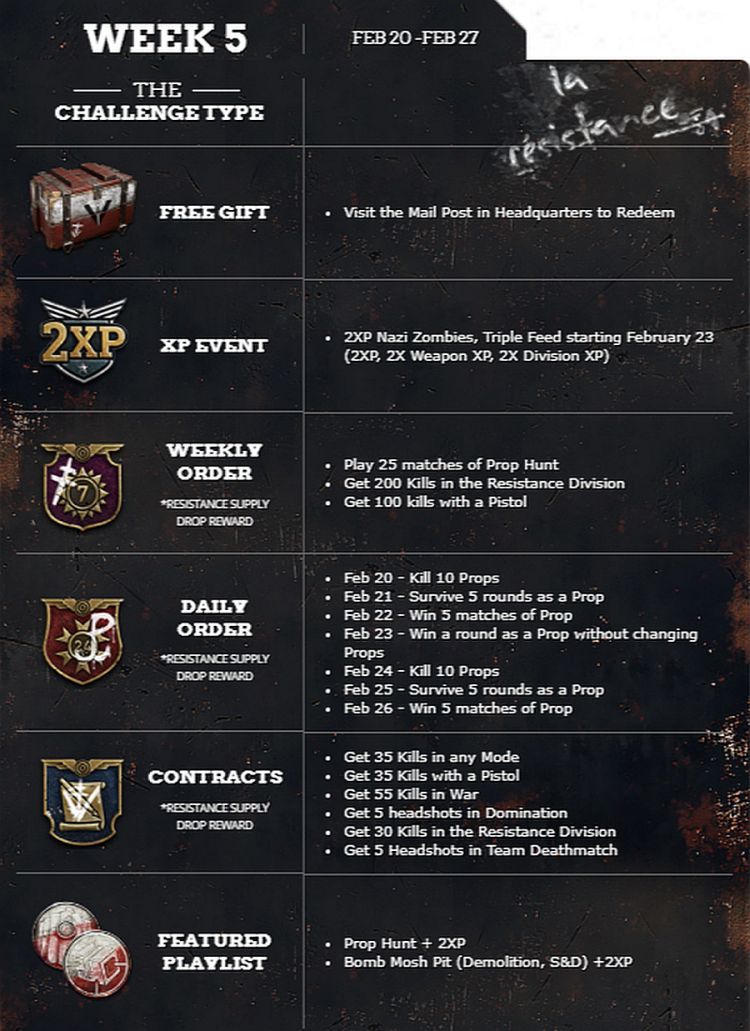 The Resistance DLC for Call of Duty: WW2 will release on January 30 for PlayStation 4 and one month later for PC and Xbox One.

The Darkest Shore is also included. It’s the next chapter in the Nazi Zombies experience.