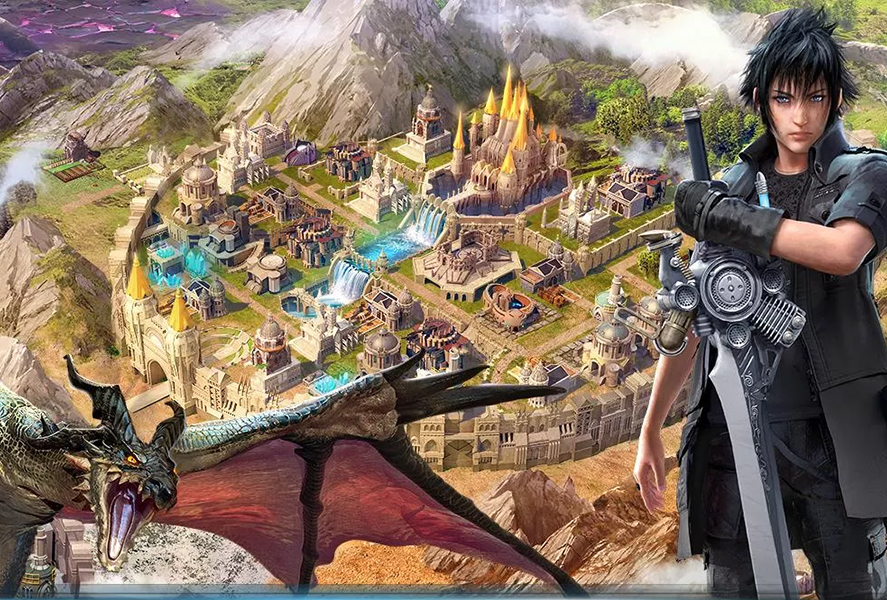 A few weeks ago at E3 I got to see a Final Fantasy 15 spin-off game for mobile, and honestly it really impressed me. It was a heartfelt little presentation that’s the antithesis of much of E3. Rather than a massive 4K screen, I was given a presentation by the director of the game on his laptop. It was just me, him, a translator and a PR person. It was an intimate session, a lovely bit of calm in the chaos of E3, and he was really, really passionate.

I left wanting to play that game, Kings Knight. That’s not the game I mention in the headline. Kings Knight is an interesting game that’s a remake of a classic NES Square game that exists in the world of FF15 as a phone game. You see protagonist Noctis and his friends play it in downtime from their HD, console-based adventure, and soon you can do the same on your phone. It looked decent.

I wanted to mention how I liked the look of Kings Knight at the top to prove there is good stuff going on inside the FF15 series on mobile, because, well…

That’s one side of the ‘FF15 Universe’ coin, but the other is uglier and best shown in the newly released Final Fantasy 15: A New Empire. It’s a cynical, ugly game, and as far as I’m concerned it’s one that actually does the Final Fantasy brand a great discredit.

“The game gives you a lot to do up front free of charge and hits you with a request to drop it a five star review early on. Pretty quickly, however, the well runs dry. That’s when you’re asked to fork over money.”

A New Empire is from the makers of Game of War (that one with Kate Upton and Mariah Carey in the ads) and Mobile Strike (the one with Arnie in the ads). If the celebrity endorsements don’t drive it home, these games make a tremendous amount of money, turning over something like a billion dollars a year. This, no doubt, is why Square has signed the deal and the rights to create a FF game over to these guys – they have good stats.

The stats are so good because the developer, MZ (formally Machine Zone) has perfected the art of free-to-play, pay-to-win milking. The cycle is simple: the game gives you a lot to do up front free of charge and hits you with a request to drop it a five star review early on. Pretty quickly, however, the well runs dry. That’s when you’re asked to fork over money, and it works, creating a great balance between good reviews (A New Empire currently sits at 13,000 five-star reviews and 7500 one-star reviews on Google Play) and revenue. They also market aggressively – several people I know in the Final Fantasy community were offered hundreds of dollars to write about the game, and it’s also currently all over the front pages of both Google Play and the Apple App store.

The long story short is that this tactic works for retaining high level, high-spend players, also known as whales. In 2016 analyst firm Slice Intelligence reported that Game of War’s paying players spent an average of $550 each on the game in 2015, where the mobile free-to-play average is $87. They’re good at this stuff.

A New Empire is essentially a mixture of ideas from both Game of War and Mobile Strike, so in that regard it’s a pretty safe bet – but that also means it isn’t particularly Final Fantasy. It’s a city and army building game with some light combat, but the basic idea is a constant treadmill: you’re always researching new things to build and then building them, but everything takes up resources that eventually disappear. Practically everything also runs on a timer, and the only way to speed things up is to spend some real world cash.

Early indications suggest that like Game of War there won’t be any way to progress in this game at higher levels without dropping real money. This is how they secure that $550 rate, however – by the time you get to that point, many are too deeply invested to stop, so they pay – and pay a lot. The largest single in-game purchase is currently $200. The game does all this while throwing a constant stream of banner ads in your face.

The fact the gameplay is different from the FF norm is fine, by the way. One of the best Final Fantasy games ever, Crystal Chronicles: My Life as a King (no, really), is a city building game. The problem, however, is tone. None of this feels or looks right. Characters talk to you with a generic tone completely disconnected from their personality from the game, the film, the anime and beyond. None of it seems to have anything to do with FF15 other than reuse of art including character renders that hilariously include photoshopped FF13 artwork and renders dating back to when the game was FF Versus 13. If you wanted to see the original design of Noctis in a game, now’s your chance! 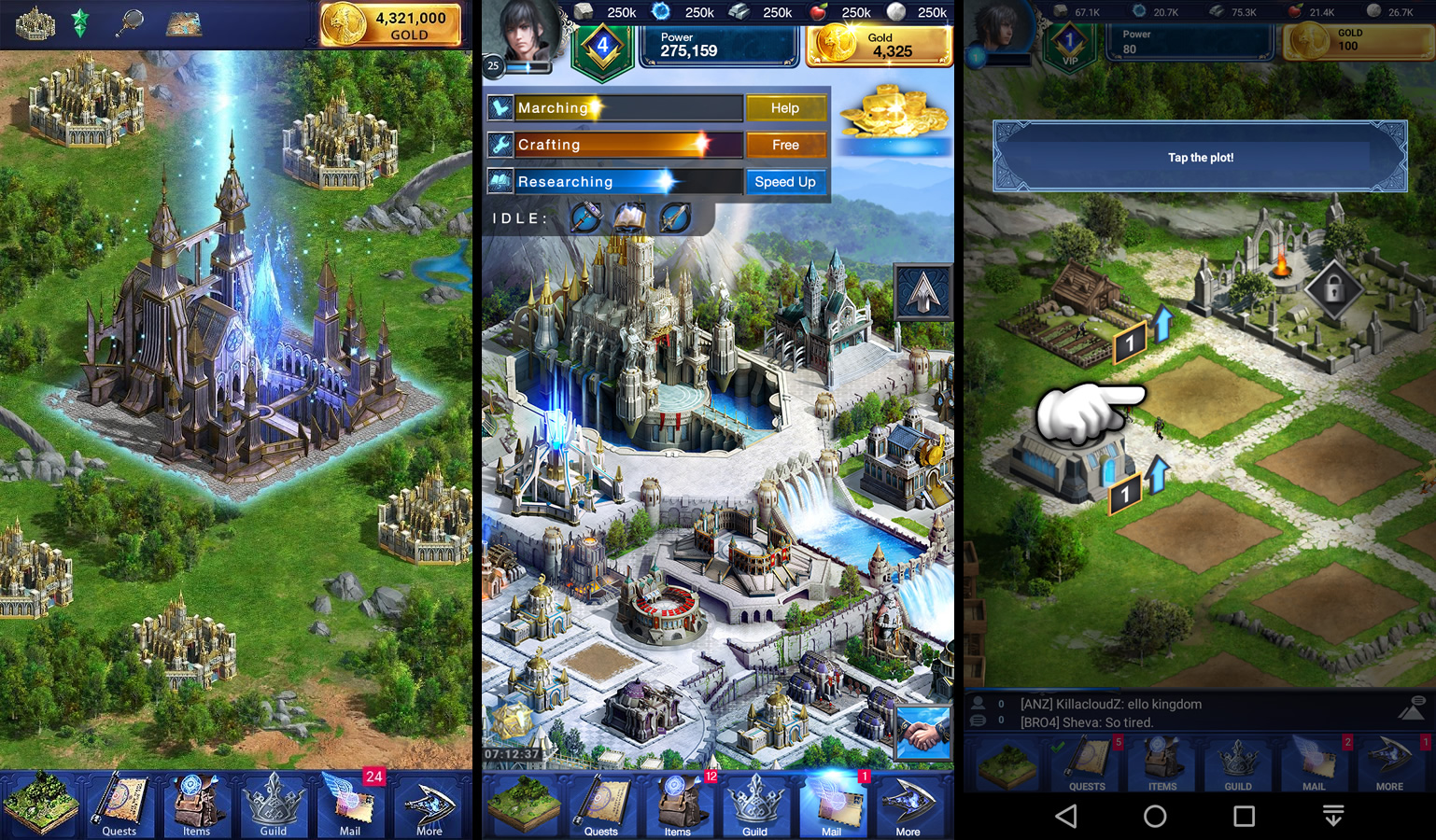 The music is there, the characters are there, but this isn’t FF15. It isn’t Final Fantasy either. I think of how those relatively run-of-the-mill Star Wars and Marvel mobile games are so reverential and respectful to their source material, and of how Marvel and LucasFilm reps comb over those games to ensure they fit and I wonder: did anyone at Square give a shit about this feeling like it fits with FF15? Did they care about FF15’s integrity? The signs sadly point to no.

“My point, I suppose, is that Final Fantasy is and should be better than this sort of crap. The series is too storied to be attached to this rubbish.”

My point, I suppose, is that Final Fantasy is and should be better than this sort of crap. The series is too storied to be attached to this rubbish. I don’t really care about how much money Game of War made: at a point a business surely has to look at what makes their brand special and decide where to draw the line. This, presumably, is where there isn’t a Star Wars or Super Mario Bros game like this.

Speaking of Nintendo: Fire Emblem Heroes features the same ‘random chance’ gacha design that’s meant to entice players to open their wallets as many free-to-play games, but it feels fair and respectful even as you progress. Further, it feels true to that series and its identity – and it still made a truck load of money. There are two Final Fantasy games like this as well – the story-focused Brave Exvius and the excellent combat-focused Record Keeper, the latter of which is an external partnership DeNA, the same developer who assisted Nintendo on Fire Emblem Heroes. I play Record Keeper every day, and have for two years – it’s a great little game.

FF15 director Hajime Tabata talked a lot about restoring FF to ‘challenger’ status; about making the series feel like a bold risk-taker again. I feel FF15 succeeded in this despite its imperfections, but the existence of something like this, a partnership that boasts some of the most awful, manipulative pay-to-win design going, makes me worry they’ve forgotten the other defining aspect of Final Fantasy: quality.

Even when the series got it wrong, there was a sense of quality, polish and vision around everything it did. FF was never without heart – something so few outside Nintendo have ever nailed consistently. Generally speaking, traditionally there hasn’t been an iota of cynicism in Final Fantasy. But today, with A New Empire, there is. As a fan, that makes me sad.