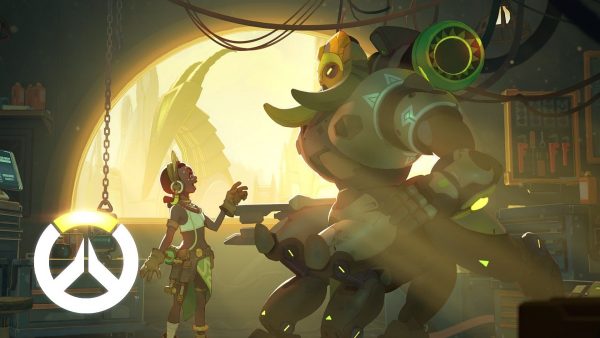 The update to Overwatch comes with the sixth tank to join the roaster, Orisa, which makes use of a rapid-fire Fusion Driver. According to Blizzard, the gun has good range and accuracy even at a distance; however, Orisa’s movement slows while firing and she has a lengthy reload time.

Her alternate fire, Halt! releases a graviton charge across the map which slows nearby enemies, and pulls them toward it before detonating.

Her Fortify ability boosts her personal defense and will reduce damage while making her “unstoppable for a short time.” She can throw a device that creates a curved, stationary Protective Barrier, which shields teammates from all sides. Her Ultimate is a high-powered Supercharger beaming a buff to allies within range, and increases damage the team inflict on the opposite team.

Other than the new hero, other updates have been made to Overwatch. Ana has had damage dished out by her Biotic Rifle
decreased; Bastion now takes 20% less damage while in Configuration: Sentry or Tank compared to the previous 35%; Junkrat’s explosions no longer hurt himself and Sombra’s teammates can now see hacked healthpacks through walls.

Many of these hero changes were reported previously when they went live on the PTR.

That’s just some of the hero changes noted, as there are more, but all of the information is posted below along with big fixes and general updates – and developer notes where applicable.

On Route 66, the attacking team is now given 60 additional seconds after pushing the payload to the first checkpoint.
Developer Comments: This change will bring Route 66 in line with the other Escort maps.

Custom Game and Game Browser: When setting up a Custom Game, players can now disable or modify abilities activated with the secondary fire button

Developer Comments: Ana’s kit has several strong components, which makes her difficult to replace. Reducing her damage output will make her less threatening on attack and reduce her dueling capabilities.

Developer Comments: After the last update, Bastion became a little too difficult to deal with, so we’re reducing his new passive to give enemies more opportunities to counter.

Caduceus Staff: The amount of increased damage that’s done when boosting another player is now tracked under the match statistics and on the Career Profile page.

Developer Comments: Sombra can be devastating in the right hands, but infiltrating and harassing enemies could often feel difficult. These changes should increase her effectiveness and teamplay.

Barrier Projector: Ability cooldown now starts when the barrier is placed, instead of when it ends

Developer Comments: This change should help Winston do what he does best: distract the enemy team and block damage.

Developer Comments: This is actually reverting a change that we made a few patches ago, which made players immune to knockbacks if they were hit by an effect from inside her barrier. This had some negative side effects, such as making targets immune to knockbacks from effects that pierce barriers, like Reinhardt’s charge and Winston’s Primal Rage punches. Now, these will cause knockback again. This does not affect knockbacks from effects that originate from outside her barriers, such as Pharah’s Concussive Blast. Those will still be blocked by the barriers, not causing any knockback.

Orb of Destruction: Alternate fire cooldown has been reduced from 1 seconds to 0.6 seconds; Weapon spread has been removed

Developer Comments: Zenyatta’s alternate fire often felt too difficult to use due to its long recovery time. This reduction should make it a more viable option. Also, his weapon has always had a very small amount of spread. This wasn’t enough to change the way he was played, but it would occasionally cause shots to miss that would normally hit their target. Removing this small variance should help him feel more consistent.

General: When Teleporters, Shield Generators, and other player-owned objects are destroyed, the kill feed now properly displays the owner’s name

A.I.: Fixed a bug preventing Bastion and Torbjörn bots from taking a defensive position when turret abilities were disabled in Custom Games

Competitive Play: Fixed a visual bug that prevented your current medals from being displayed in the setup phase between rounds