It looks like our favourite robot is new and improved. 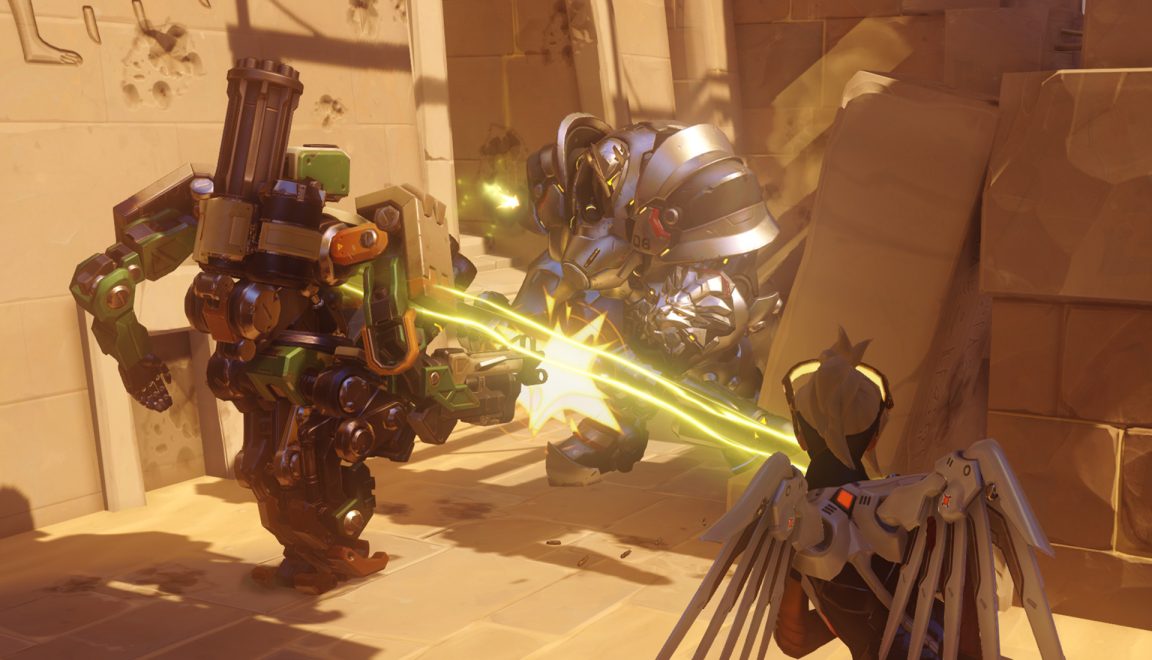 “Previously Bastion was unable to move while repairing, whereas now he can not only freely move, but it has single-handedly transformed his play style. Clever use of scenery and his Self-Repair has ensured he can now take on Heroes that were previously off limit.”

Bastion is a strange Hero. Not only does he cause misery to new Overwatch players, but he is often an easy kill for anyone experienced or playing as part of a coordinated team. His static nature of play, relatively weak Configuration: Recon, and inability to be viable outside of his Configuration: Sentry has seen him bring little to the game. Despite still being fun and more than capable of doing reasonably well in PUG matches (typically exploiting the uncertainty and inexperience of fledgling players) it is fair to say he deserved some buffs.

What’s particularly challenging when it comes to Bastion however is that his kit is largely on a knife edge. Provide too much survivability and damage to his Configuration: Sentry and he’ll comfortably clear any team (as was often experienced during his earlier iterations). Provide too little and his Sentry becomes largely useless. Where his Configuration: Recon is concerned, many of the same problems apply with the premise that if he’s too viable simply running and gunning, not only does it make his Sentry redundant, but it would significantly undermine the validity of Heroes such as McCree or Soldier 76.

Finding that sweet spot between his ability to freely roam outside of his Configuration: Sentry, with the ability to still pressure from far and still gun players down, is challenging. I can fully appreciate why Blizzard has delicately approached the balance of Bastion: he didn’t spawn his own meme for nothing.

But now with the release of the Overwatch update 2.05, Bastion has received a significant round of changes: 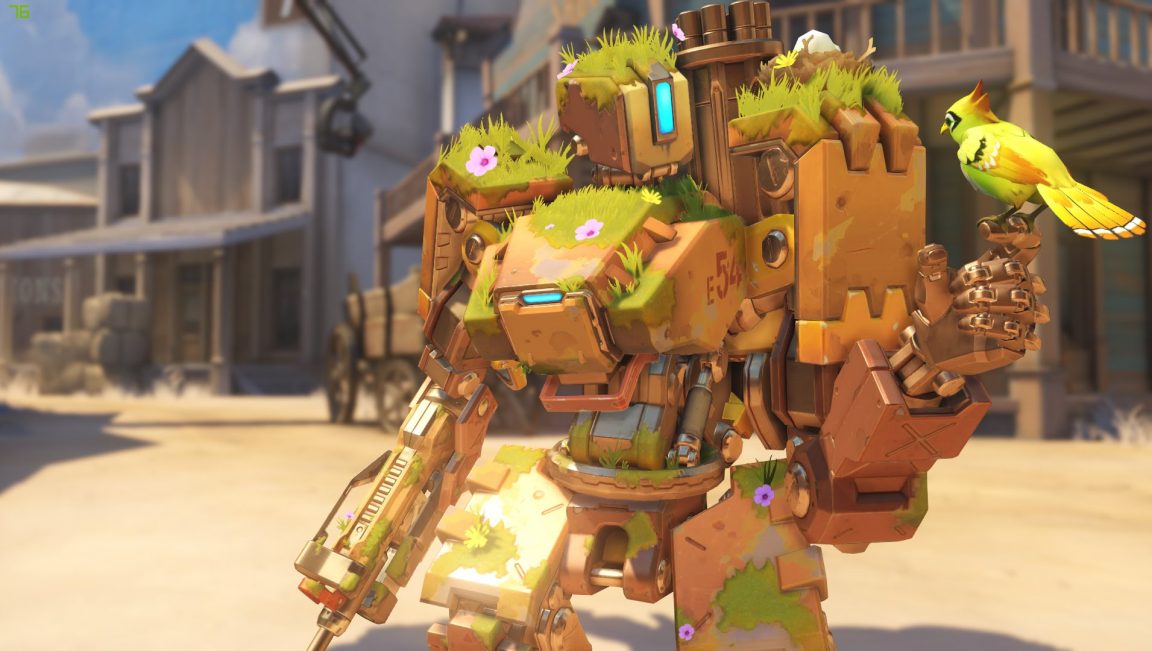 It’s a set of undeniable buffs with only a smattering of balance tweaks, to offset the notable improvements (specifically his Bullet spread from Sentry mode having been increased).

The key question then, is Bastion any more viable after update 2.05 as a result of these changes? Undeniably, the answer is yes.

I’ve always loved Bastion. Between him, Mei and Junkrat, I seem to have an attraction to the underdog. Even if selecting him is a bad decision – certainly on specific maps and with some team compositions, it undeniably is – I’ve always gravitated towards him. The appeal of setting up shop in Configuration: Sentry, in a location the enemy team don’t suspect, is unquestionably gratifying. The thought of also being a roaming robot capable of suppressing fire, while still having the ability to sustain yourself, makes for an exciting Hero.

“On multiple occasions, whether in Recon or Sentry, the new magazine sizes allowed me to kill opponents I know for a fact would have killed me. There’s now a freedom to let loose that little bit more.”

Unfortunately for Bastion, he was incredibly lopsided to the point where it was often suicide to roam or even switch positions and his ability to trade blows with just about any opponent would often end in death. Even when being babysat by the likes of Mercy or Reinhardt, he remained niche and easy to uproot.

The changes made by Blizzard for update 2.05 are rather clever and have transformed him into what I’d originally hoped he would be. Where he was once a one trick pony, there’s now a sense he’s actually viable outside of his Configuration: Sentry. Certainly the matches I’ve played, against a cross-section of abilities, has seen me do exceptionally well remaining solely in Recon. One particular encounter against Soldier: 76 was particularly enjoyable as I constantly whittled his health down, repaired my own before rushing him for a near instant Sentry at point blank range.

The larger magazine size of both modes has helped him enormously. Not just for prolonged firefights but also for those moments when your aim might be a little off, or you simply need to hedge your bets in the hopes of finishing off an opponent. On multiple occasions, whether in Recon or Sentry, the new magazine sizes allowed me to kill opponents I know for a fact would have killed me. When I’d often need one or two more bullets, only to find myself reloading, there’s now a freedom to let loose that little bit more. 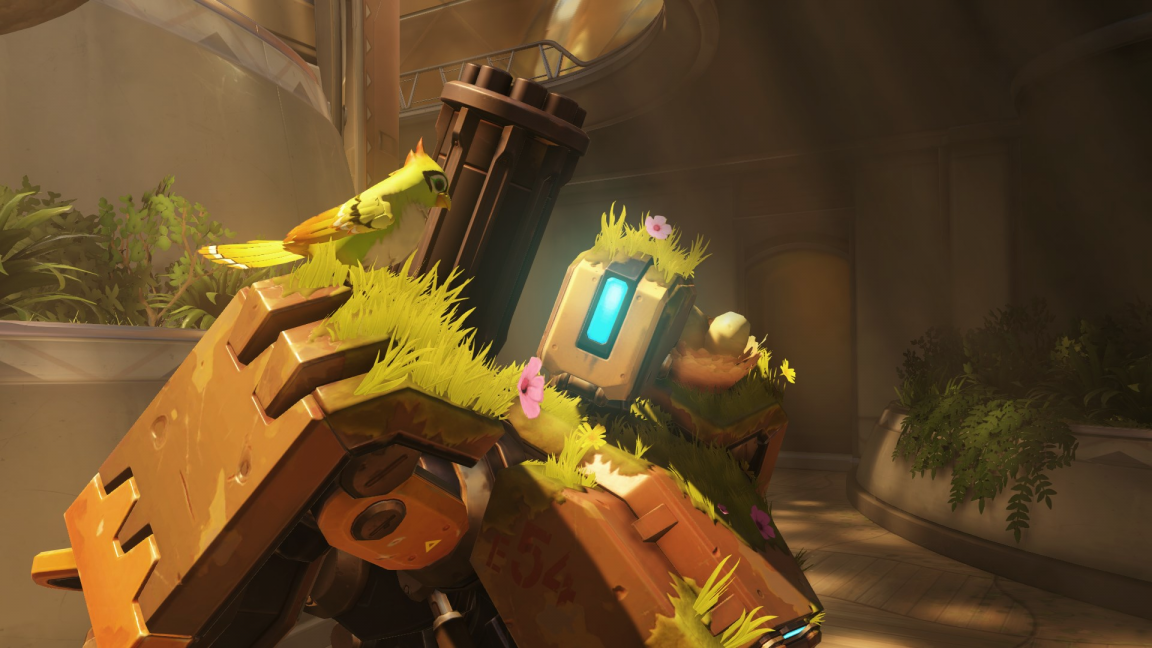 It has to be said though that despite the greater accuracy of Bastion’s rifle in Recon mode and its larger clip size, the focus of his update has to be on the mobility Self-Repair now affords.

Previously Bastion was unable to move while repairing, whereas now he can not only freely move, but it has single handedly transformed his play style. His sustain is incredible and despite him still being vulnerable to focus fire or crowd control (like any Hero) he can now poke, replenish himself, return back to combat and constantly pressure. Clever use of scenery and his Self-Repair has, as far as I’m concerned, ensured he can now take on Heroes that were previously off limits.

There’s no mistaking some Heroes are still incredibly challenging (Roadhog remains a firm favorite here) but for the first time since release, I don’t feel like I’m hindering my team for doing something as simple as choosing Bastion on Attack. In fact, he has proved rather adept at times thanks to his mobile healing.

As to whether or not these changes will help Bastion when it comes to the competitive scene, it’s simply too early to tell. There’s every chance he’ll see more play – of that I’ve no doubt. To what degree however, I suspect only a few percentage points.

For him to truly shine amongst a team, I think further adjustments to his Tank configuration would be welcome (can we speed up its transformation somewhat?) while squeezing in some group utility into his kit would be ideal. As to what that could be, I’ll let Blizzard decide, but there’s certainly an argument for him needing something… more. As changes go however, these are all good and go a long way in helping one of my favorite Heroes.