We get our first look at concept art from the upcoming Battlefield 1 expansion, They Shall Not Pass. 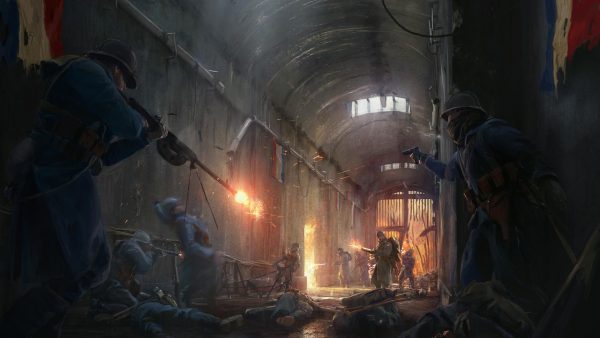 Battlefield 1‘s first add-on is called They Shall Not Pass. This has been known for a while, and we also suspected it would bring the French Army into the game.

Now, DICE has officially started talking about it, revealing part of the process the studio is going through when developing it. In a new blog post, the developer shared a couple of new concept images that represent what the team had in mind when creating the new maps.

DICE says around 1 million shells were fired at the start of the Battle of Verdun in France. This lead to massive forest fires that surrounded the city, and in one map, the studio wanted to capture the initial fighting of the Devil’s Anvil battle.

The story of the garrison of Fort Vaux will be the focus of another map. The dark underground corridors formed a maze of dark galleries, and the close-quarters combat that took place there is something the developer wanted to capture. DICE said it also wanted to explore the tunnels and “underground fortresses” that ran underneath some of the trenches.

The Battle of Soissons will be the setting of another map, capturing the massive French tank assault of key bridges over the Aisne River. You can see all the concept images below:

They Shall Not Pass will release sometime in March.