Capcom has released two new videos for Dragon’s Dogma, its open-world RPG slated for release on PS3 and Xbox 360. The first one, called Phantom and Ogre shown at Captivate 2012, shows the integration between combat, graphics and cooperation with your Pawns. Watch below as the main character and Pawns faces off against a group of phantoms and a rampaging Ogre. The second video shows the group go up against the undead. There’s also two bits of artwork below. Game’s out May 22. 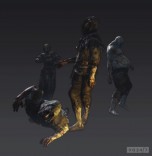