Xenoblade Chronicles 2 is absolutely huge, but it's not a case of quantity over quality.

I probably shouldn't have been, but I was caught off-guard by how utterly enormous Xenoblade Chronicles 2 is. The game is so big I've struggled to put the necessary time into it to put pen to paper for a review, but after some marathon sessions the game finally began to click. It's a game that takes some time to get to where its developers clearly envisioned it ending up, but once it does it's excellent stuff.

In many ways Xenoblade 2's length telegraphs to players what to expect from the game. It's enormous and has stunning depth, but in line with that it takes its time to stop, smell the proverbial roses and really consider what it's presenting to you. The opening of the game is a slow-paced, world-building affair that eschews the explosive openings most games go for now. Even Zelda: Breath of the Wild's opening which simply turns you loose into the open world with little fanfare seems bombastic by comparison.

After some story and exposition drops you're presented with a hub world complete with NPCs, side quests and plenty of intriguing little nooks to explore, and the game really doesn't kick off and up a notch until you complete a few sub-objectives and initiate the first proper story mission. Basically, it takes its sweet time - which can feel a little frustrating early on, but it's necessary.

"The core design of Xenoblade is ultimately the star of the show, with combat and character customization still a joy even as you hit hour twenty or thirty."

Xenoblade Chronicles 2 needs to take things slow because this is a properly hardcore Japanese RPG. The slow-moving pace is necessary because Nintendo and Monolith Soft want a larger audience for this title as evidenced in things like the Zelda DLC crossover. There's an absolute slew of systems to introduce from the way you traverse the enormous world of Alrest to the entirely overhauled battle mechanics that are now driven by your equipped 'blade' weapons, with each of the many blades in the gaming having an assigned role, your character's typical RPG class and the associated systems then determined by your three currently equipped blades.

At a glance Xenoblade 2 seems like it's all about auto-attack and letting the game play itself, but in reality there's a great deal more to it than that. Your three party members will always automatically hone in on an enemy and unleash basic attacks, but the real skill in Xenoblade comes in pre-battle preparation and then deciding when you switch strategies or change approaches mid-battle in order to chain together attacks, with this eventually leading to mega-powerful burst attacks. As you perform regular attacks you build meter that can be spent on 'Arts', special attacks that often carry unique properties that can turn the tide of battle.

It's quite complicated, and at a very broad level I'm vaguely reminded of Final Fantasy 13, a game that could look like hitting X on auto battle over and over again but that actually was all about shifting between carefully pre-determined battle load-outs that could actually get quite stressful in its challenge. Xenoblade Chronicles 2 is that, but with the background depth in character growth and customization that was sorely missing from that game.

If you want an idea of just how complicated it is, just take a look at a screenshot of the game in battle. The user interface is a bit of an eyesore to put it lightly, but I also can't act like everything on-screen isn't entirely necessary. Xenoblade's combat is hectic, exhilarating and tactically rich - and that means a lot of information has to be surfaced back at you. Seriously, look at it. 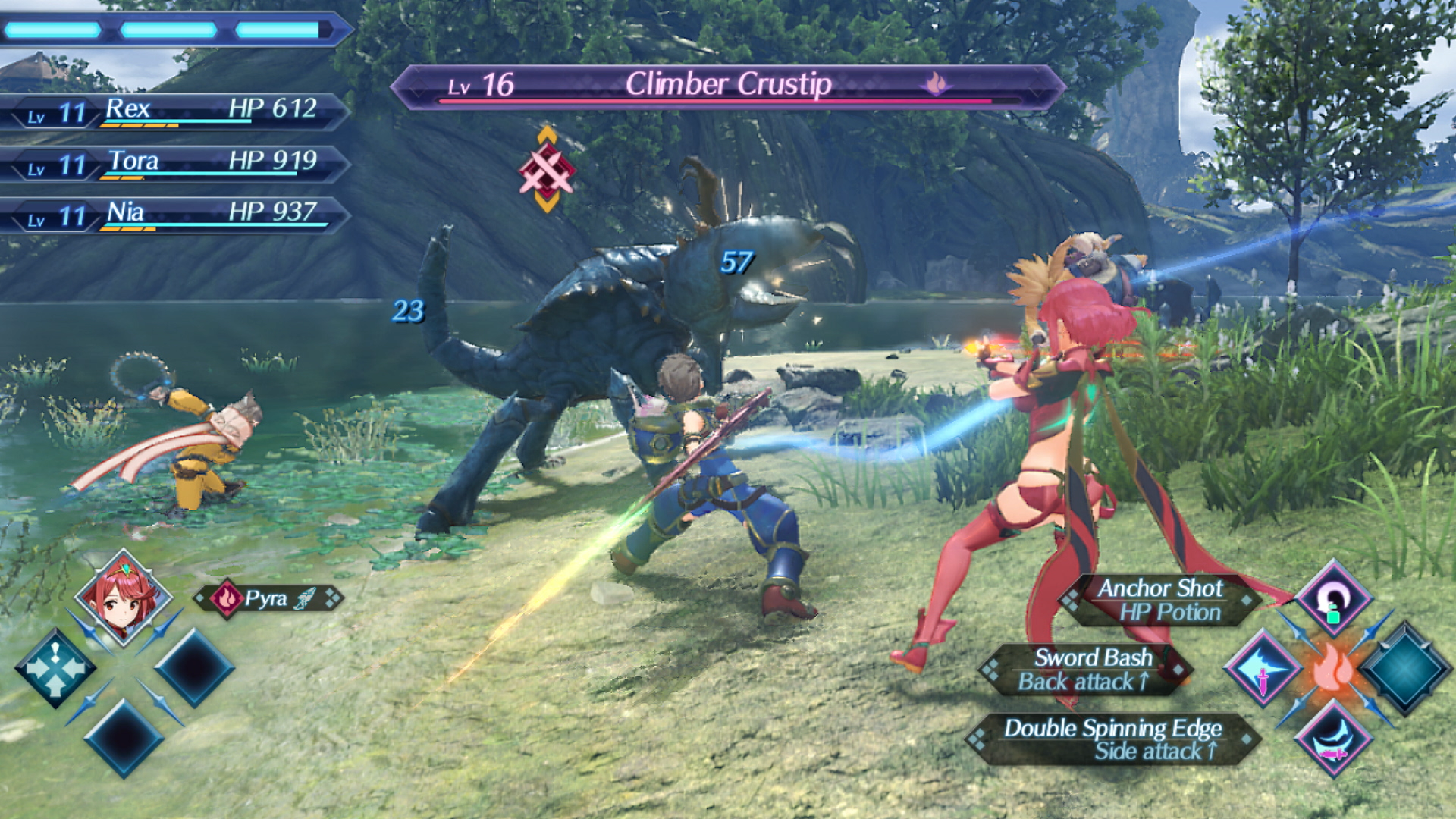 This core design of Xenoblade is ultimately the star of the show, with combat and character customization still a joy even as you hit hour twenty or thirty. It's a Japanese-style RPG exactly as you expect, so you'll be advancing a slightly melodramatic plot where a boy-meets-girl story mashes up with saving the world while picking up quests and exploring a huge, varied world, but combat is where the game is at its absolute best. It takes several hours too long treading on eggshells to finally introduce every mechanic you need to truly express yourself in battle - another trait the game shares with Final Fantasy 13 - but once you do everything clicks. It's a joy, and it's also a well-balanced joy, not running into the pitfall of forcing grinding to progress.

These successes match well with wonderful environments, and it's easy to see in them in what ways Monolith Soft likely provided support to Nintendo during development of Breath of the Wild. Alrest is a place just as enticing as Hyrule, but by the very nature of its lore is also one that feels infinitely more varied, a fact that allows for ambitious, sprawling environments with unique, memorable design elements.

The final winning element is a generally charming-whimsy-filled script - though it's one that takes a good while to get going. What's surprising is that this cliche-filled narrative takes a turn at a certain point and begins to barrel towards much more exciting and immediately engaging events - but like what feels like everything in Xenoblade Chronicles 2 it takes a while to get to that point even if you ignore side quests and attack the main story specifically. 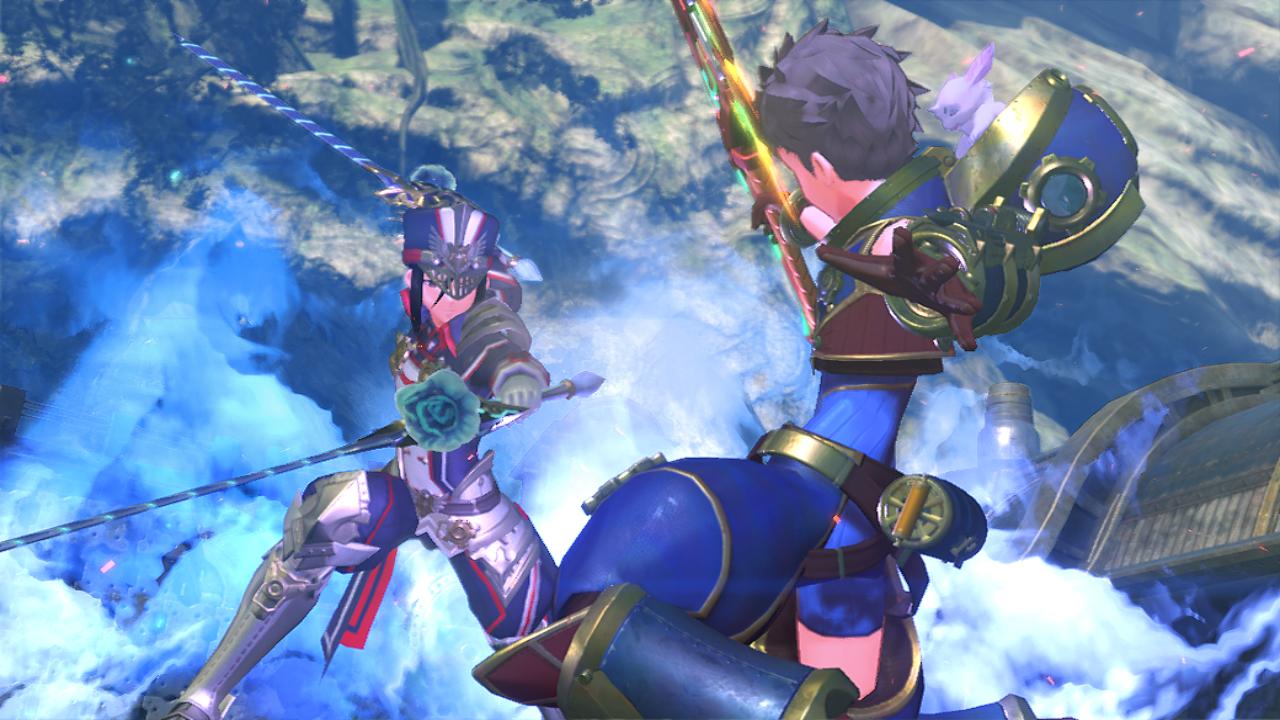 "The localization is full of hit-and-miss work, sometimes regaling you with some lovely regional British accents that work. Most of the rest of the cast is not so lucky, however."

All this evens out to a compelling, enjoyable experience, though elements of Monolith Soft's design still leave me puzzled. For one, the manner in which you open blades is reminiscent of all your worst loot box nightmares with the real money component removed. There's a shed load of blades you can gather and use, but you nab them for the most part by opening 'Core Crystals' - basically loot boxes that you open up that'll give you a random reward. There's no nickel-and-dime mechanism for spending real cash here, but the frustration of getting a rubbish draw is here all the same. The game even autosaves the second you begin to open, the developers making clear save-scumming isn't on the cards. Blades are tied to a lot beyond combat, such as lockpicking and other environmental abilities that can do everything from gain you new loot to open up new areas of the world, so having the right blades is key.

Then there's the character design and the localization - and this is where Xenoblade 2 seems to struggle the most. The localization is full of hit-and-miss work, sometimes regaling you with some lovely regional British accents that work, with positive stand-out performances for protagonist Rex and his Welsh cohort Nia. Most of the rest of the cast is not so lucky, however. You can download Japanese voices if you prefer, however, and performances aside the entire cast is generally lovable and memorable in a way the cast of Xenoblade X were not.

The character design is probably my main issue, with the style in question really not working for me at all. After an inept more realistic turn in Xenoblade X this game veers back hard in the opposite direction towards anime, and I can't help but feel like somewhere in the middle - incidentally where the first game sat artistically - would be better. 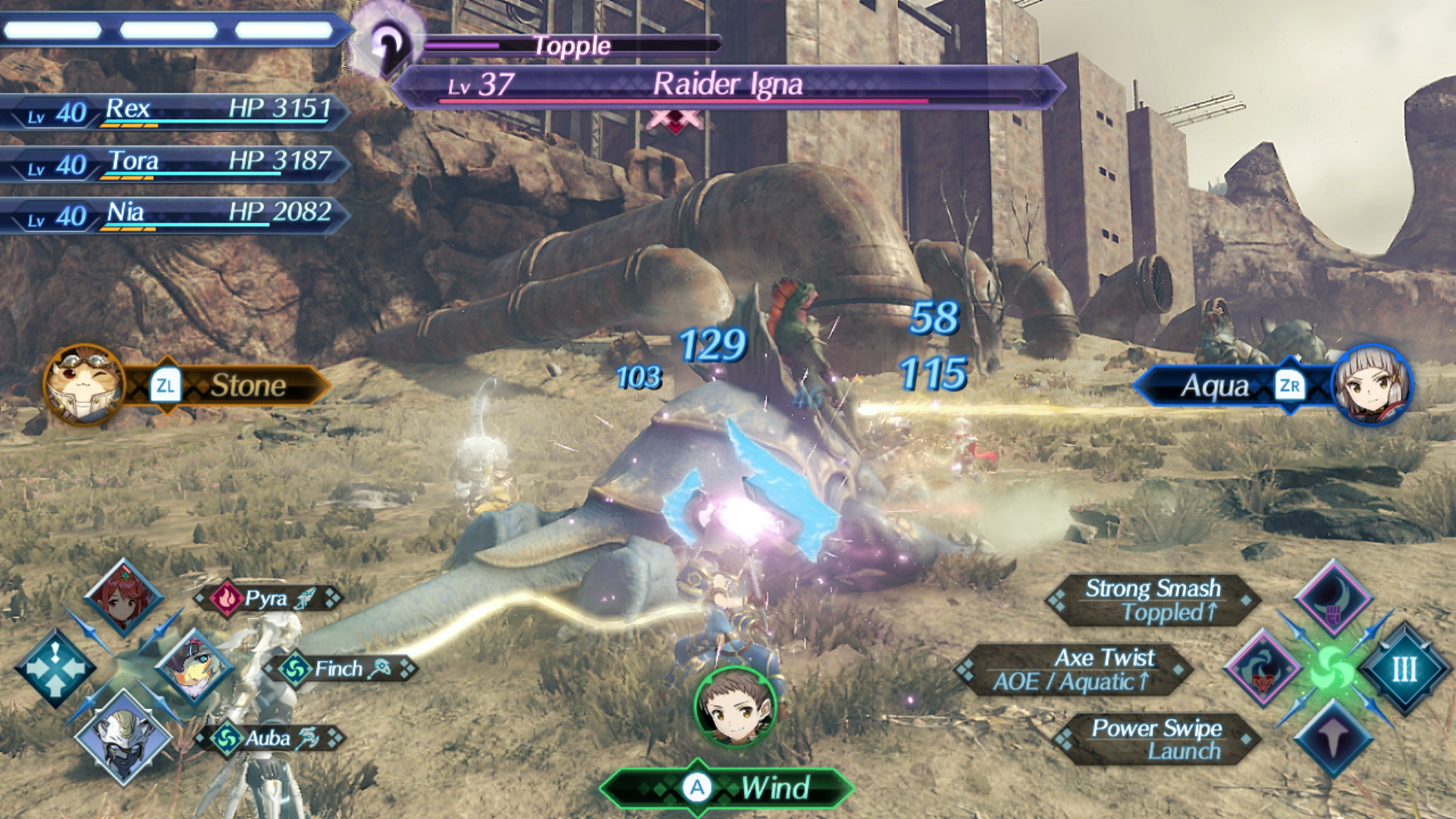 There are minor technical issues too, but they're minor enough to not really factor. There's a nasty Mass Effect 1-like texture loading thing going on after fast travel and some frame rate shenanigans, but generally it runs well. In fact, my biggest technical criticism is that the previously-mentioned user interface doesn't shrink or change at all when you've got the Switch in handheld mode - and that's a lot of information for such a small screen.

I've spent a while touching on my main criticisms, but ultimately if you enjoy high-quality character customization around combat in an RPG these criticisms are likely to melt away after you've spent a few hours navigating the more hand-holding tutorial sections of the game. There's an admirable, bold level of depth on show here, and even the story begins to pull its weight more vigorously in the second half of the game. The fact that combat still works after so many hours proves that this is the best sort of RPG, one with a longevity and a depth not so often found in story-driven Japanese RPGs in the current market. You'll likely want to go back to tackle high-end sidequests, optional monster battles and more even after the story credits have rolled.

Nintendo might be marketing Xenoblade Chronicles 2 as the next step for players done with Breath of the Wild, but in truth it's a welcome throwback to the Japanese-made RPGs of yesteryear, featuring both the strengths and weaknesses you'd expect from that fact. I suspect many will bounce off Xenoblade Chronicles 2's sluggish first few hours, but those who stick it out are in for something really rather special.