Now that you've got your bearings in Colorado, it's time to take on the first of the Buchanan children: Valor. He's not the fighting type, instead preferring computers and security systems. But to bring him in you'll first have to deal with the Gippers, a notorious cult The Patriarch only keeps sweet because they supply Colorado Springs with oil.

Like many of the main quests in Wasteland 3, The Zealot is a multi-layered story with multiple endings depending on your actions. Here's how they all turn out.

Before you head out, you'll need to equip your Kodiak for the job. This means completing the Rad Attack quest first, which involves recruiting garage staff in Unwelcome Guests before purchasing a new radiation-resistant chassis from them back at Ranger HQ.

Speak to either Fastback or one of the Cotters, and choose either the level 1 or 2 chassis depending on how much money you want to spend - they cost ~$1500-1700. 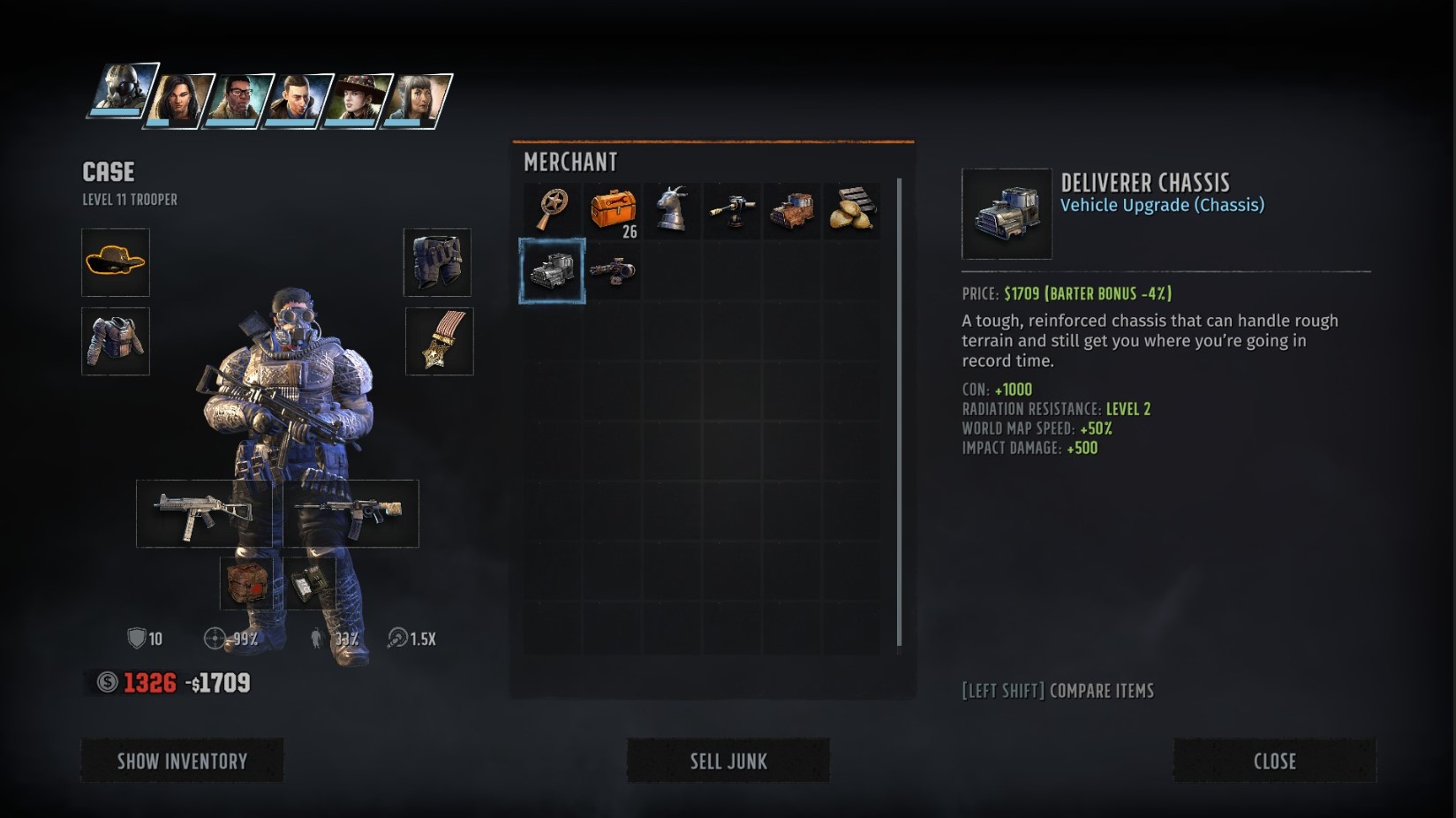 Now you can travel to Denver from the world map through the radiation. It's over in the northeast corner.

As you approach the city, you’re forced out of the Kodiak at a roadblock.

It’s Liberty, here to deliver the message that she won’t come quietly. You can grill her about her brothers, or attack her if you’ve got a death wish. Otherwise, she’ll let you go and you can press on after Valor. 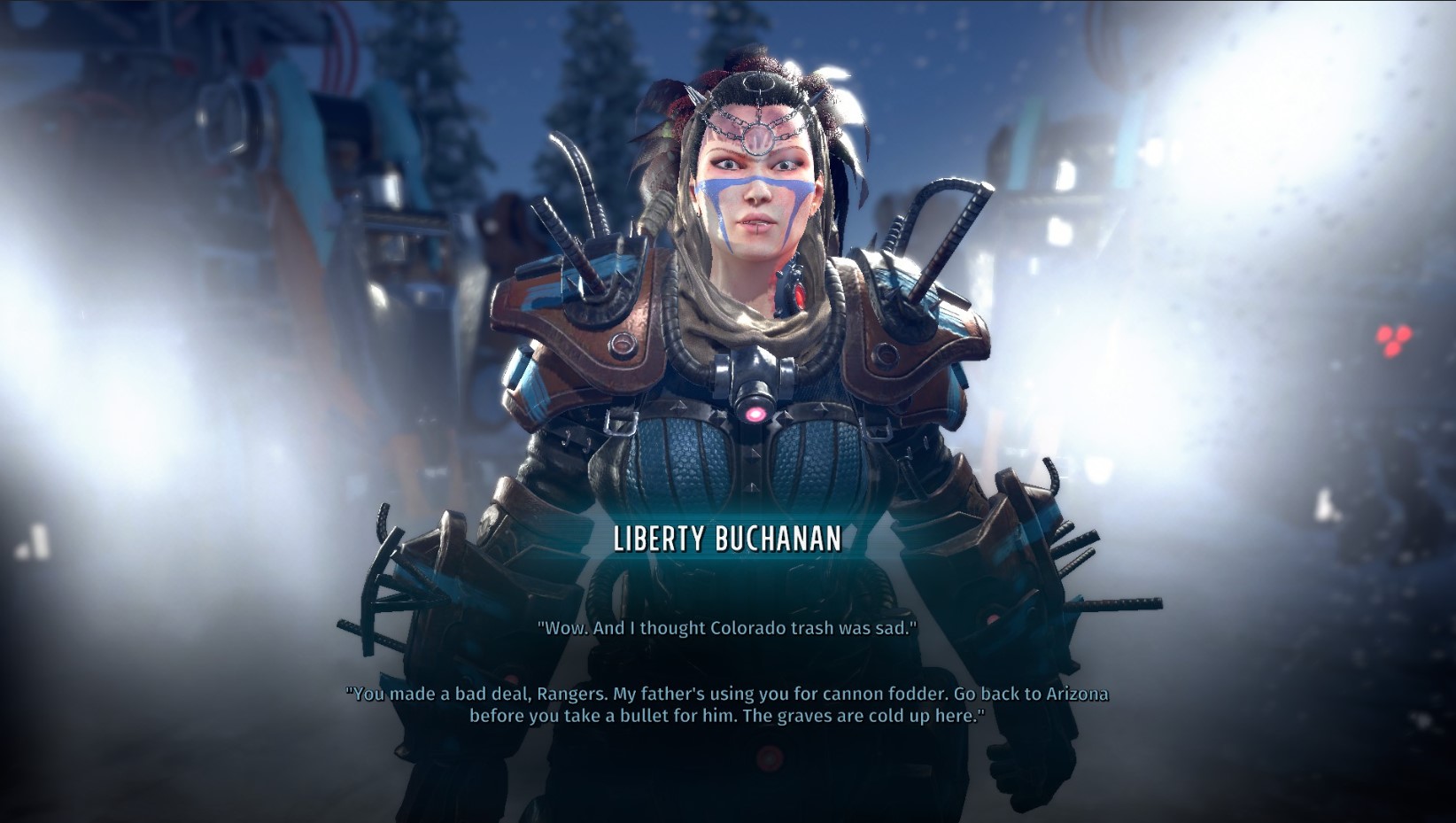 Make your way into the city through the scene transition. You’re met by Sister Glory and Mother Nancy Reliance. They’re having a trial for members of the two neighbouring factions in the area - the robot commune and the Godfishers.

You can Kiss Ass 4 your way into an audience with Reagan, but either way it’s best to remain polite. The Kiss Ass gets you a point of Rep with The Gippers. However, don’t insult the Reagan-bot or you’ll lose a rep point. 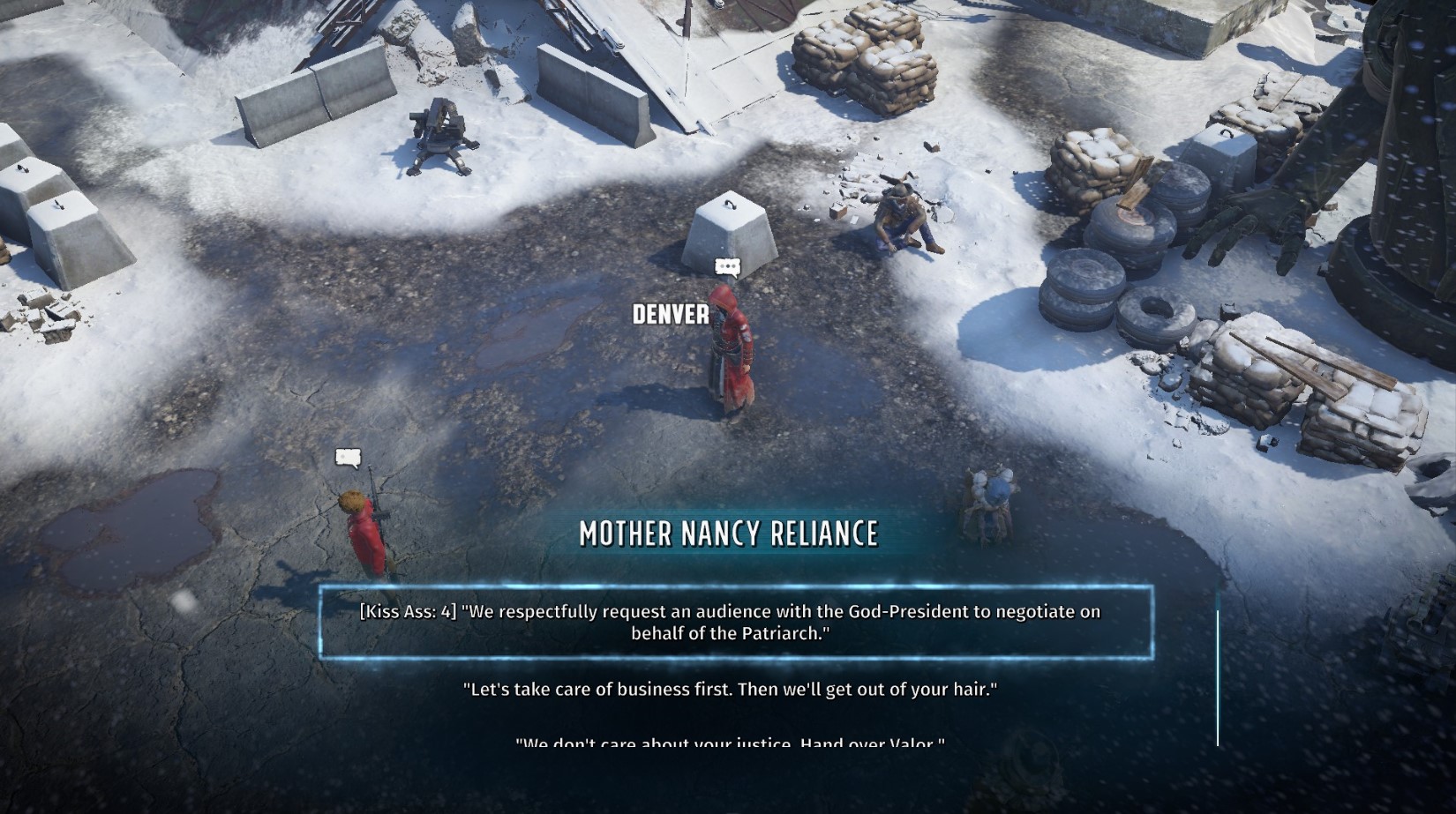 Once you’re done you’ll be invited into the western White House on your left.

Go inside and search all of the rooms, picking up a quest from the Wyman and making note of the Subsystem computers for later. When you’re ready, approach the vault door at the back of the building.

At the bottom of the stairs, you’ll find Valor, Nancy Reliance, and the Reagan AI.

As you enter, Valor will recognize you and protest to the AI. But Nancy will basically offer to sell out Valor to you if you can get a transfer module to give the Reagan AI a human body. Accept, and you can head out to the robot commune to the east.

While you're walking, or if you go up the path to the south, you’ll be hailed by the Godfisher from earlier. She’ll ask you to sabotage the terminals in the White House and in exchange they’ll kill all of the Gippers.

You can agree even if you don’t intend to help them, since it makes it easier to pass through their camps to the airport commune without a fight.

At the airport entrance, you’ll be met be Greet-o the spider bot. Don't try to override its brain - no spoilers, but trust me. Ask after the transfer module and it’ll direct you to the tower. 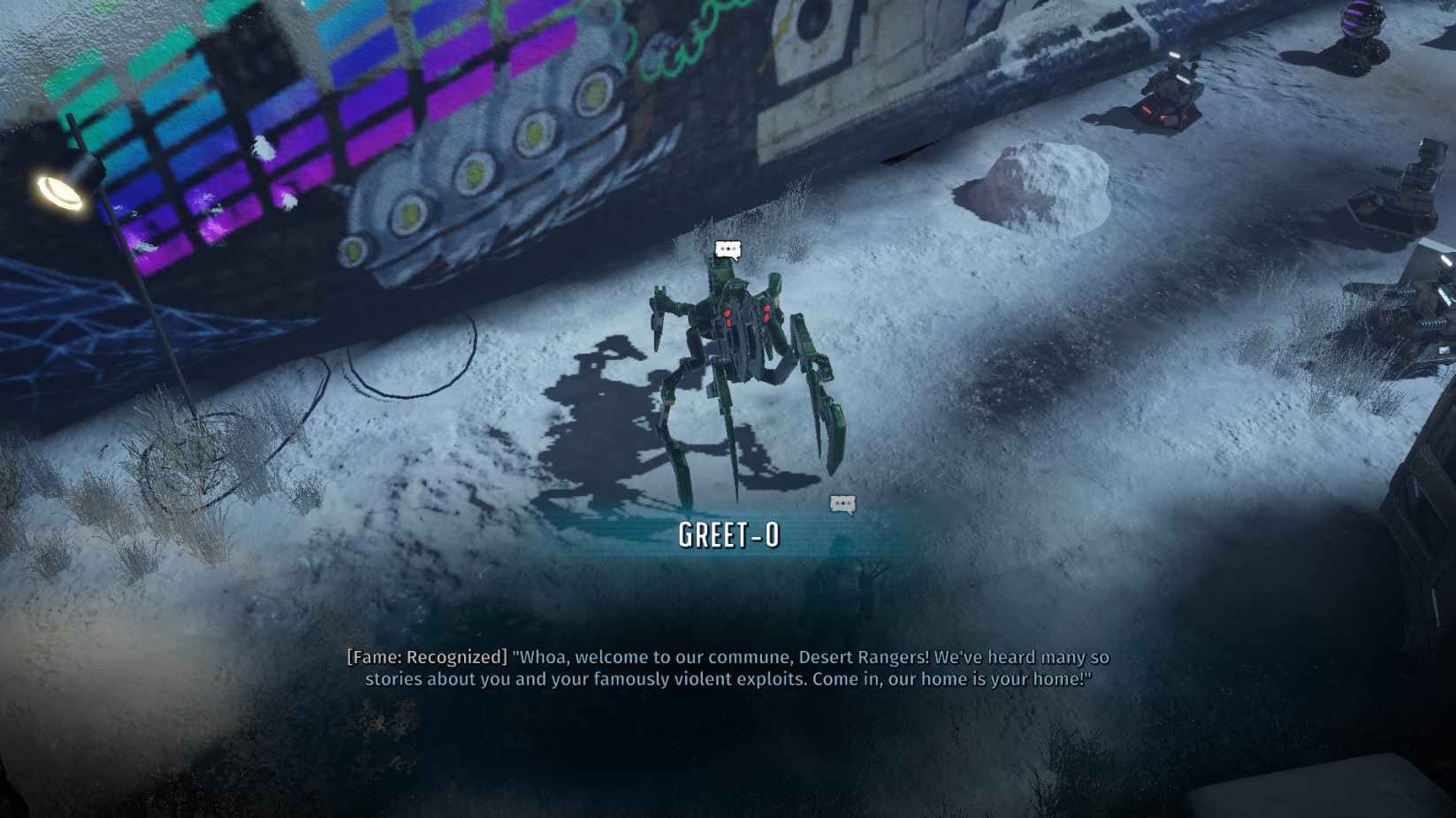 Follow the path around, compliment SAL on her radio station the way, and you’ll eventually find yourself in a large area filled with named robots. On your left is Little Sparrow, who you can have sex with that will leave you diseased - it's funny and doesn't last, so I'd recommend doing it. 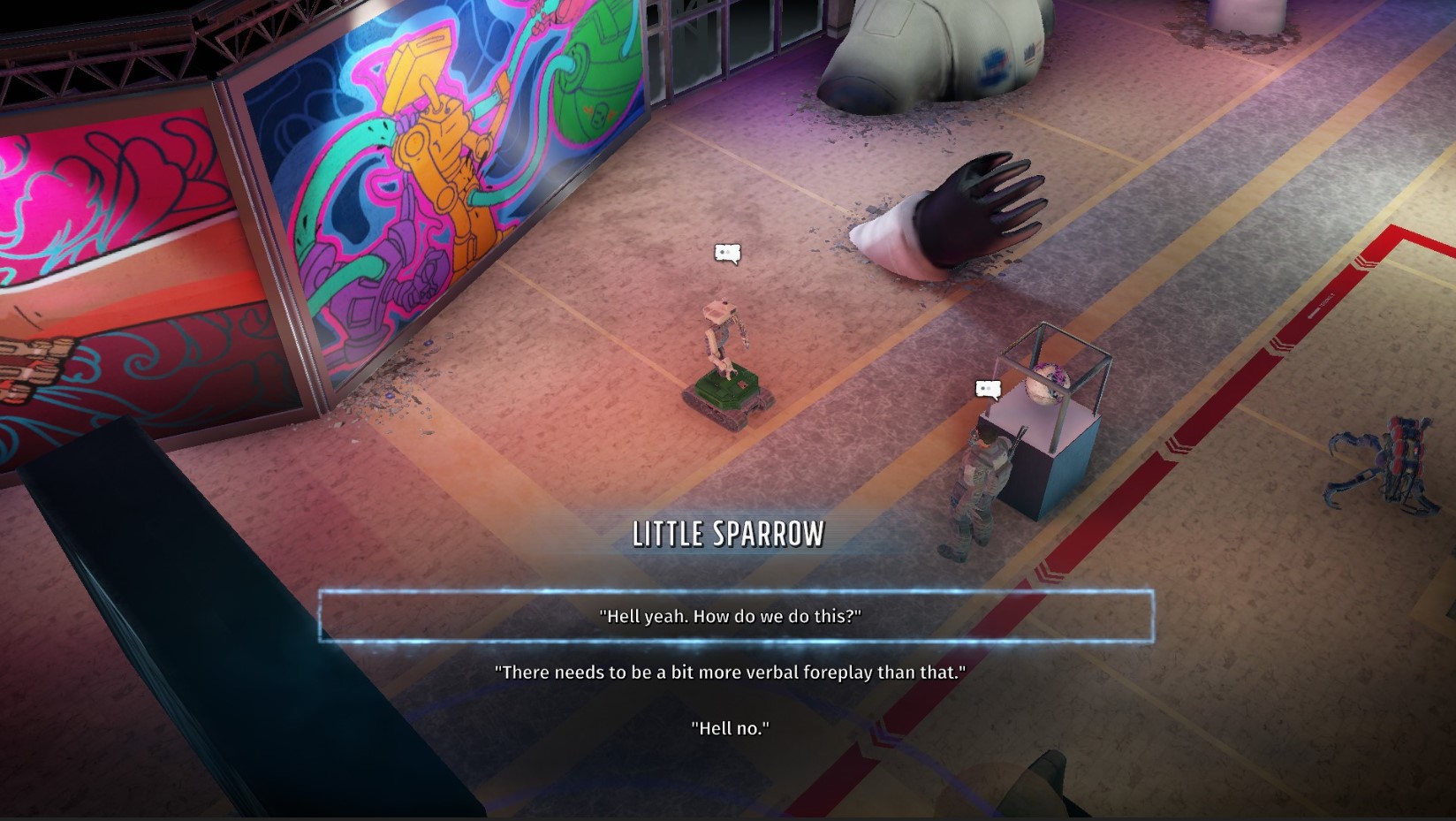 In the far left you can help Pico with his hologram game. He’ll try and talk it out every time, so you can win every round just by picking to attack.

You can use Nerd Stuff 7 to make him less empathetic, but more able to fight, or Hard Ass 6 to make him pick at random, which he doesn't like.

Also speak to the artist robot by the painted billboards. Again, be complimentary, and treat it as the robot's own work - not asking if there was a human original.

On the path to the right you’ll find Vivisecto, who you need to speak to for the Wyman quest. He can also turn you into a cyborg and install cybernetic upgrades on your person for a fee.

His missing assistant, V.I.C.I, is found through of the door next to Pico, and there are lots of Bile Bombers and Drools to fight in the disused hangar. You'll meet V.I.C.I. through the set of doors on your right after the room of mutants. Save her from the beasts, and she'll speak to you. 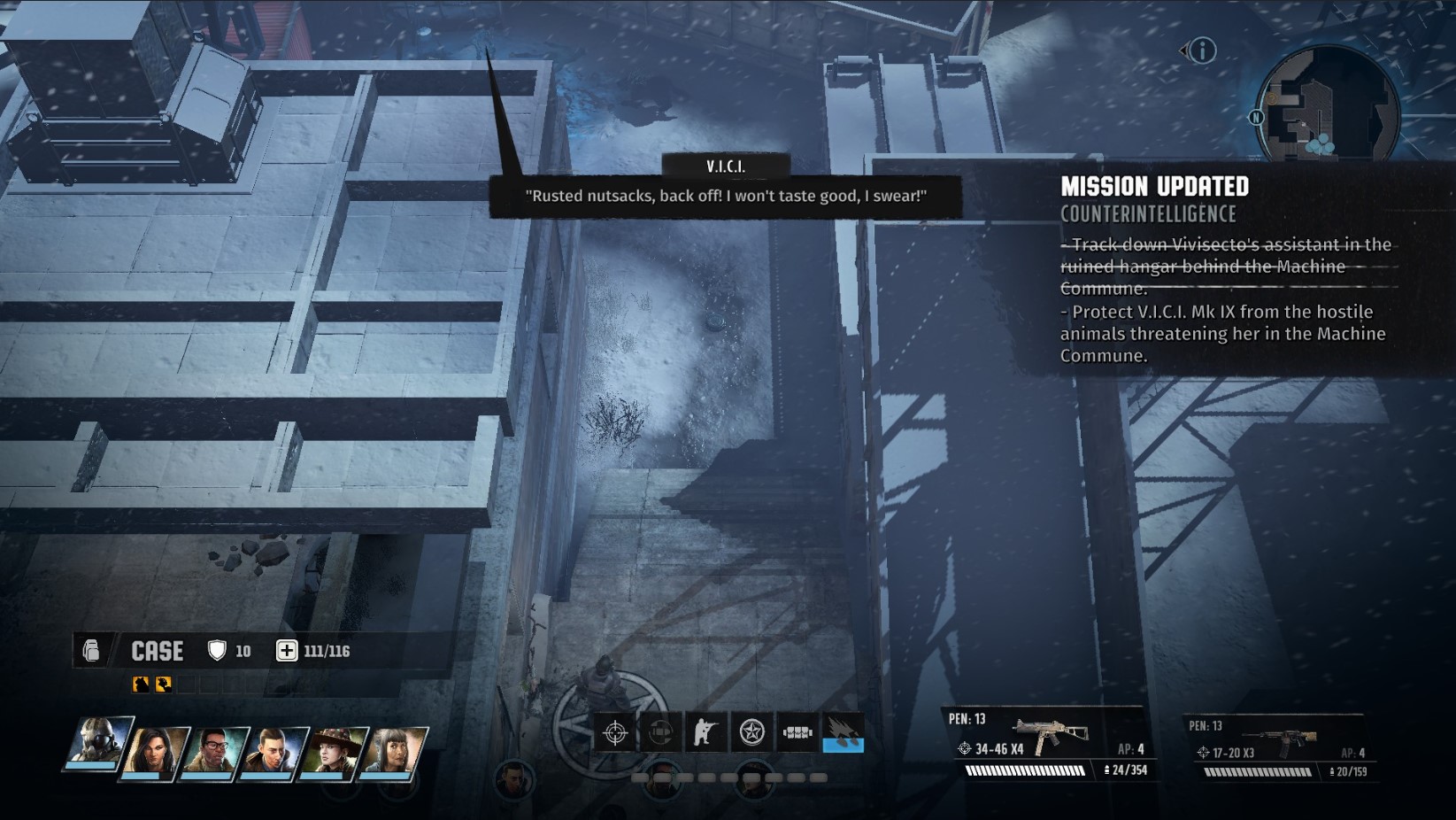 Take the tissue samples for Vivisecto and you can either use Nerd Stuff on the bot to decommission it or invite her back to your med bay at Ranger HQ. I chose the latter and she gives you a unique perk. Buried in front of V.I.C.I is an Animal Whisperer skill book.

Return to the doctor bot, and he'll want compensating with a small amount of cash if you can't talk your way out of taking his assistant. Either way, he'll accept the samples and give you the info. Give these to Wyman when you go back to the White House to complete the quest.

Further down the hall past that is a vending machine - put some money in, then fix it with Nerd Stuff 5 or Mechanics 6 to have it sell you a lot of interesting items.

Around now you should be told that the tower is ready to speak to you. So make your way there, speaking to Tinker on the way. Use Kiss Ass 4 to convince Tinker to move on with their life instead of holding a grudge against the Rangers and they'll be quietly grateful. 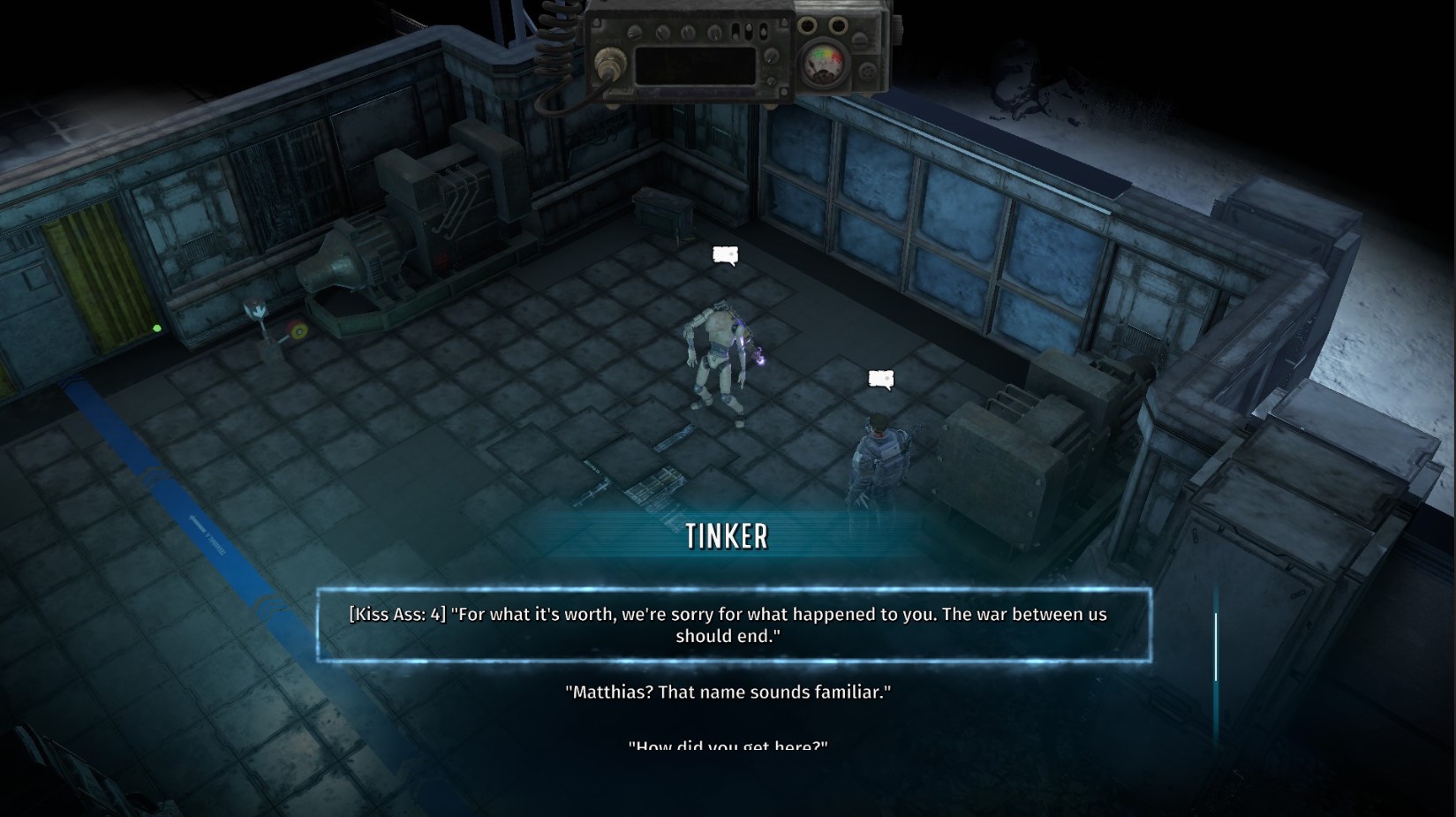 Through the next set of doors, there’s a hidden Creepy Doll buried down the stairs to the left of Jimmy-6.

Finally, go up the stairs to the Tower. Tell it you need the transfer module, but it’ll evaluate whether you’ve been nice enough to the robots on your way here to see whether it should be hostile.

If you’ve been friendly, it will give you the module, but ask you not to transfer the intelligence to a vessel, but to give it to them to “be free”. 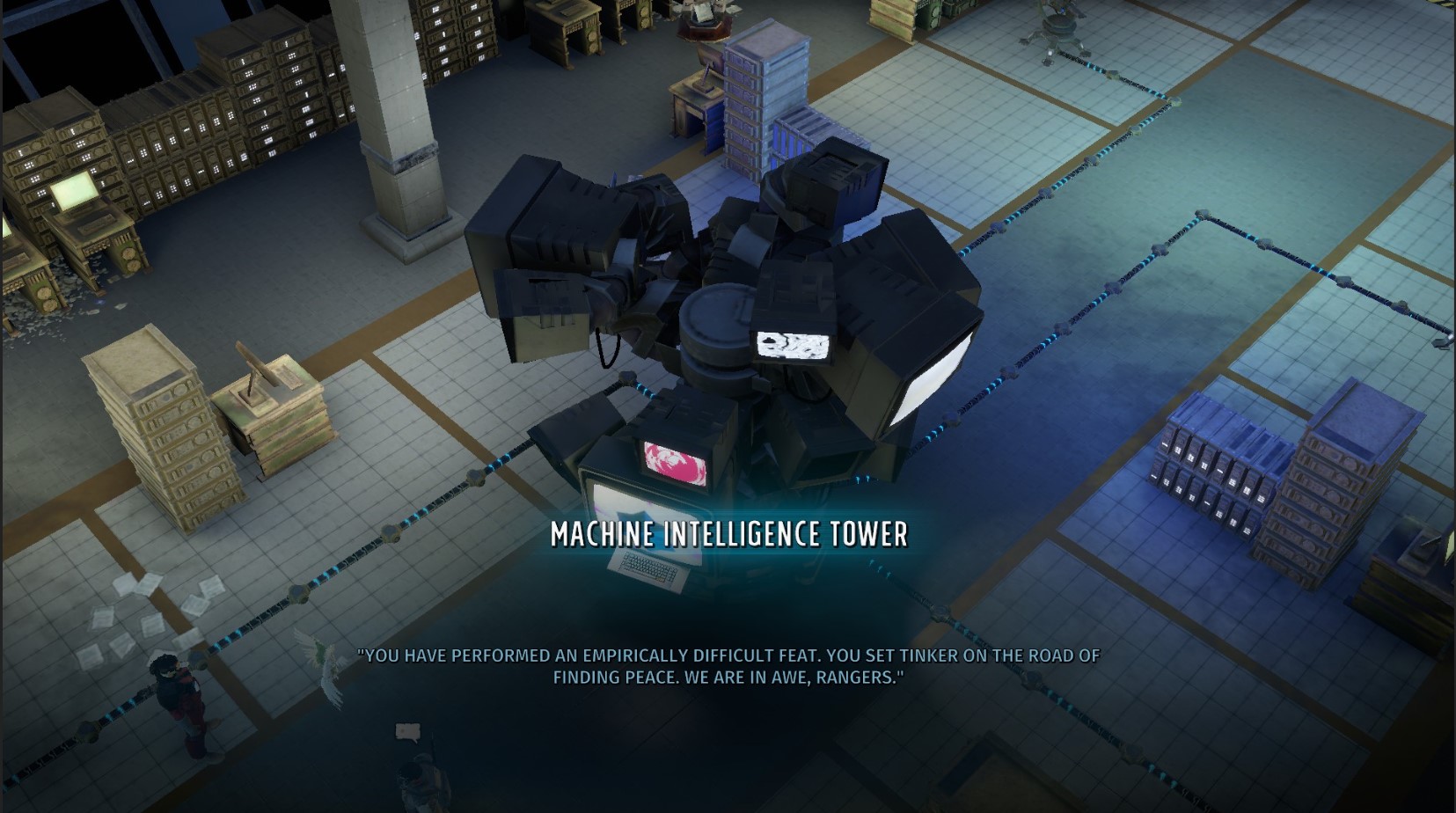 As a reward, helping the AI will grant you a medic robot companion - which is very good in combat. 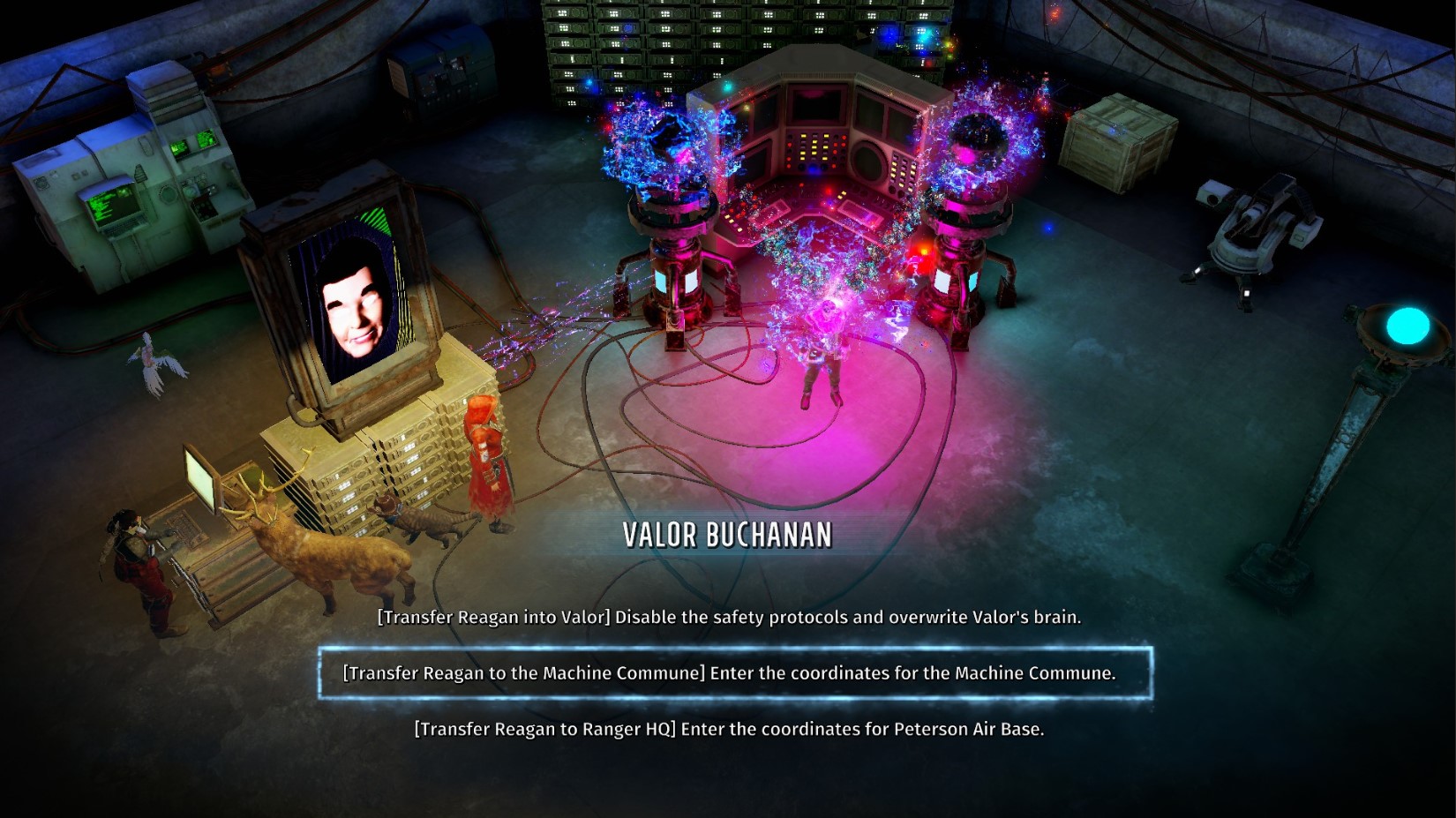 Head back to the Gipper compound in Denver, and it’s choice time - kill 'em all, side with Reagan, or help the robots.

On your way back you have the chance to save a razorback from a group of waste wolves on the oil field to get it as an animal companion - it gives you bonus penetration if you can charm it.

If you want to kill everyone, there’s a terminal that you can reach with 5 Lockpick and Mechanics underneath the Reagan statue (shown in the screenshot below). Sabotage it, then head over to the two inside the White House, either side of the main staircase. 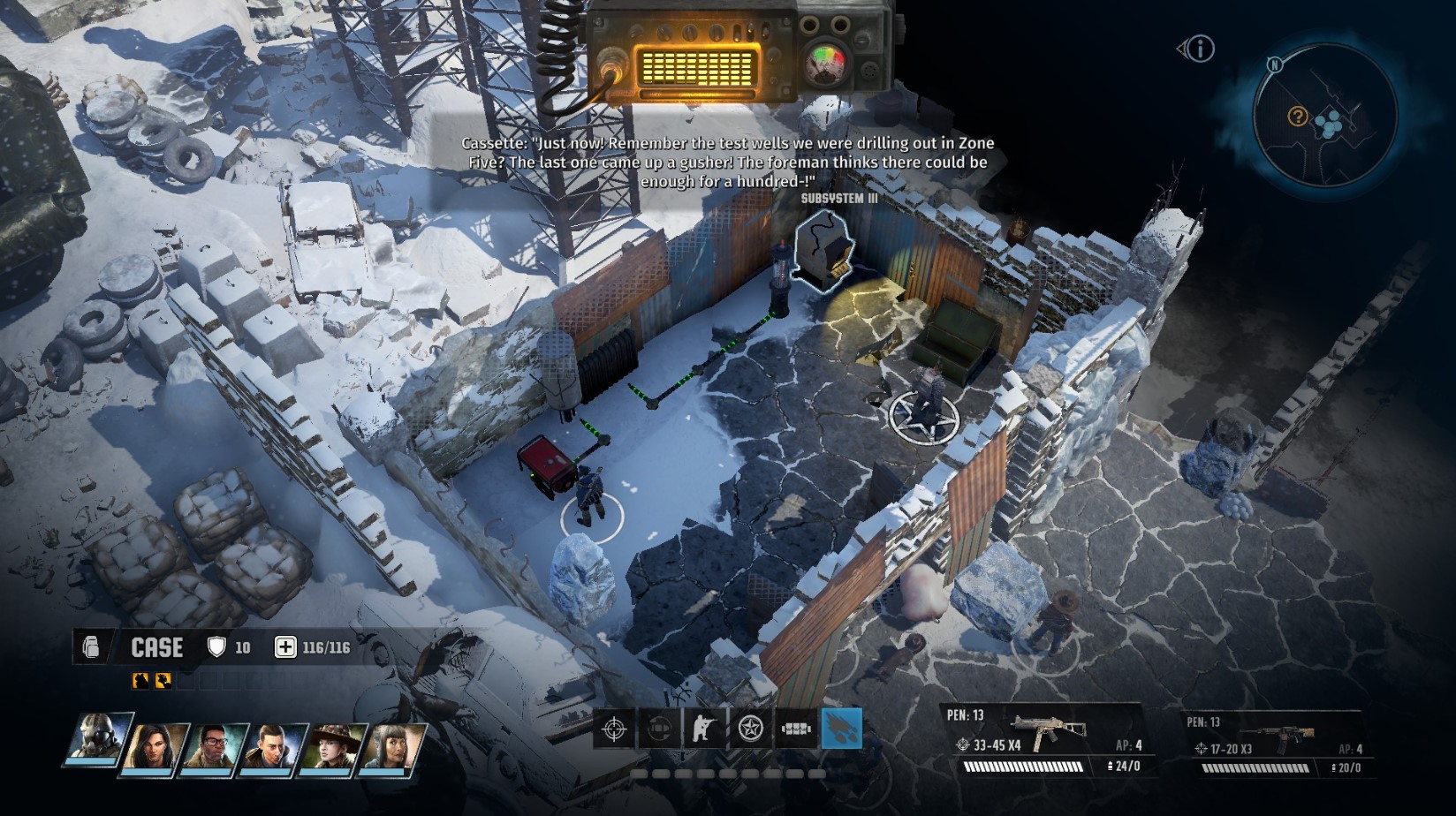 You need to pass a Kiss Ass 6, 5 if you’re liked by the Gippers, or Hard Ass 5 check with the guard at station 1 to get past.

With them all sabotaged, talk to Flensing-ice on the oil field and the Godfishers will launch a devastating attack. You can still take the Reagan AI to the robots, but The Patriarch is very unhappy. In fact, you fail the mission. I wouldn’t recommend doing this based on that.

To transfer the intelligence to a new body, go to the White House bunker. Turns out they want to transfer it into Vic, so it’d be Reagan ruling Colorado.

With Kiss Ass 5, you can lie and control the terminal. Then you get the choice to transfer Reagan to Valor, the machines, or Ranger HQ.

If you go along with the transfer, the Gippers betray you if you try and arrest Valor. But kill them and you can still take him in.

If you turn Valor into Reagan and let him stay with the Gippers, then the Patriarch isn’t best pleased but you do complete the quest without a reward from him. Instead you're given a unique rocket launcher: Reagan's Gaze.

To side with yourself:

Transferring the Reagan AI to Ranger HQ means you can hold it hostage to get Valor unharmed and without a fight. However, the machines aren’t happy and you don't get the reward they offered. The Patriarch is nonplussed and only cares about his son. He gives you XP and a load of ammo.

However, seeing as you’ve taken it hostage, you’d think you could give it back to either the robots or Gippers after you’ve secured Valor - I can’t find a way to do this.

To choose the robots:

Giving the Reagan AI straight to the machines starts a big fight. But if you kill the Gippers you can take Valor in unharmed. This is a long and difficult battle, but ultimately worth it, I think.

All in all, it looks like the Gippers are the baddies in the situation. If you trust them they betray you, and it’s very possible to get Valor out alive.

I’d say the best solution in terms of XP and rewards is to turn Reagan over to the machines, which lets you go back there for cybernetic enhancements if you want them, as well as bagging you the powerful disco bot follower.

If you want to side with the machines, I highly recommend clearing out the Godfisher camps via the quest you get from Sister Glory outside the White House, as well as giving the intel to the Wyman in her quest. This means you get all the XP benefits for progressing your character from the Gippers, but also the best reward from the machines and stay in the good graces of The Patriarch.

Also if you sabotage the Reagan statue first via the terminals mentioned in the Godfisher's ending earlier, you can then initiate the final Godfisher battle after you've destroyed their camps. The resulting melee severely weakens the Gippers, which makes it a lot easier to fight your way out with Valor. 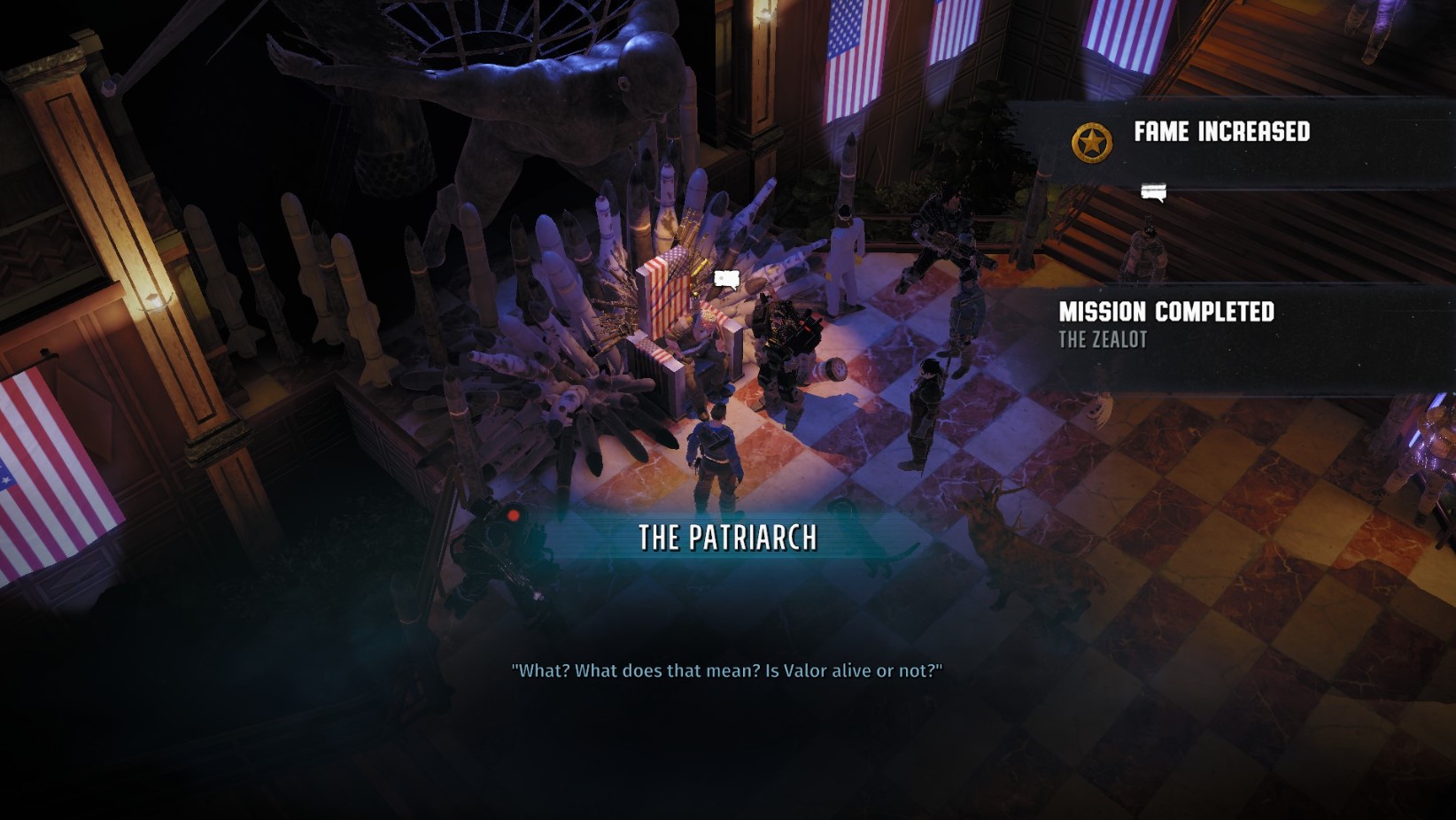 Whichever you choose, return to The Patriarch afterwards to get him up to speed. Even if you disobey his wishes, he's willing to give you one more chance. To stay off of thin ice, you either need to take Reagan hostage, or send him to the machine commune.

For more on Wasteland 3, check out our chracter build guide.