Team November aren't the first Rangers in Colorado. Before your fateful arrival, an expeditionary force led by Angela Deth were sent by General Woodson to establish a foothold in the region - but they went dark.

Now with your squad running errands for The Patriarch, Deth has returned to try and turn your head to her cause. She wants you to free a captured warlord - Ironclad Cordite - who allegedly has dirt on ol' Saul Buchanan.

The Lords of War quest is your first real test of faith in Wasteland 3 - here's how it can shake out.

While you can complete this quest relatively early on in Wasteland 3, you're pushed in Cordite's direction multiple times throughout the story. It is possible to rescue the warlord from his prison without scuppering your deal with The Patriarch. However, it will put you on your final warning.

This means there will be no room for error with The Zealot with Valor Buchanan and The Psychopath with Vic. 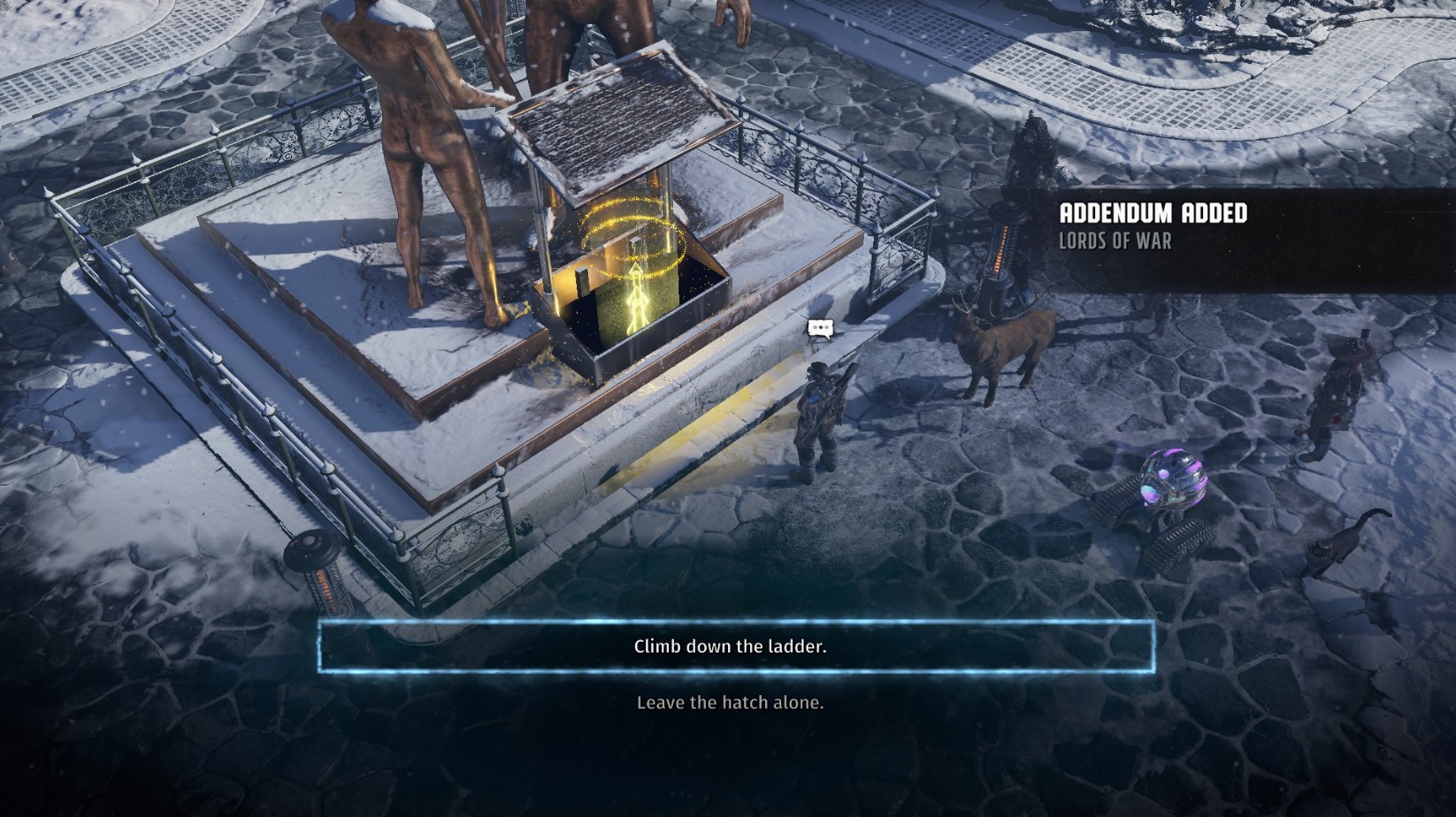 After you've received the radio transmission from Angela Deth, you can go to the statue on the western side of Broadmoor Heights. There you'll be able to access a hidden button, and then transition into the black site bunker.

Inside the first room, you can either try to sneak past or talk directly to the mercenaries at the far end of the room - but either way they'll see you when you head over to the right. 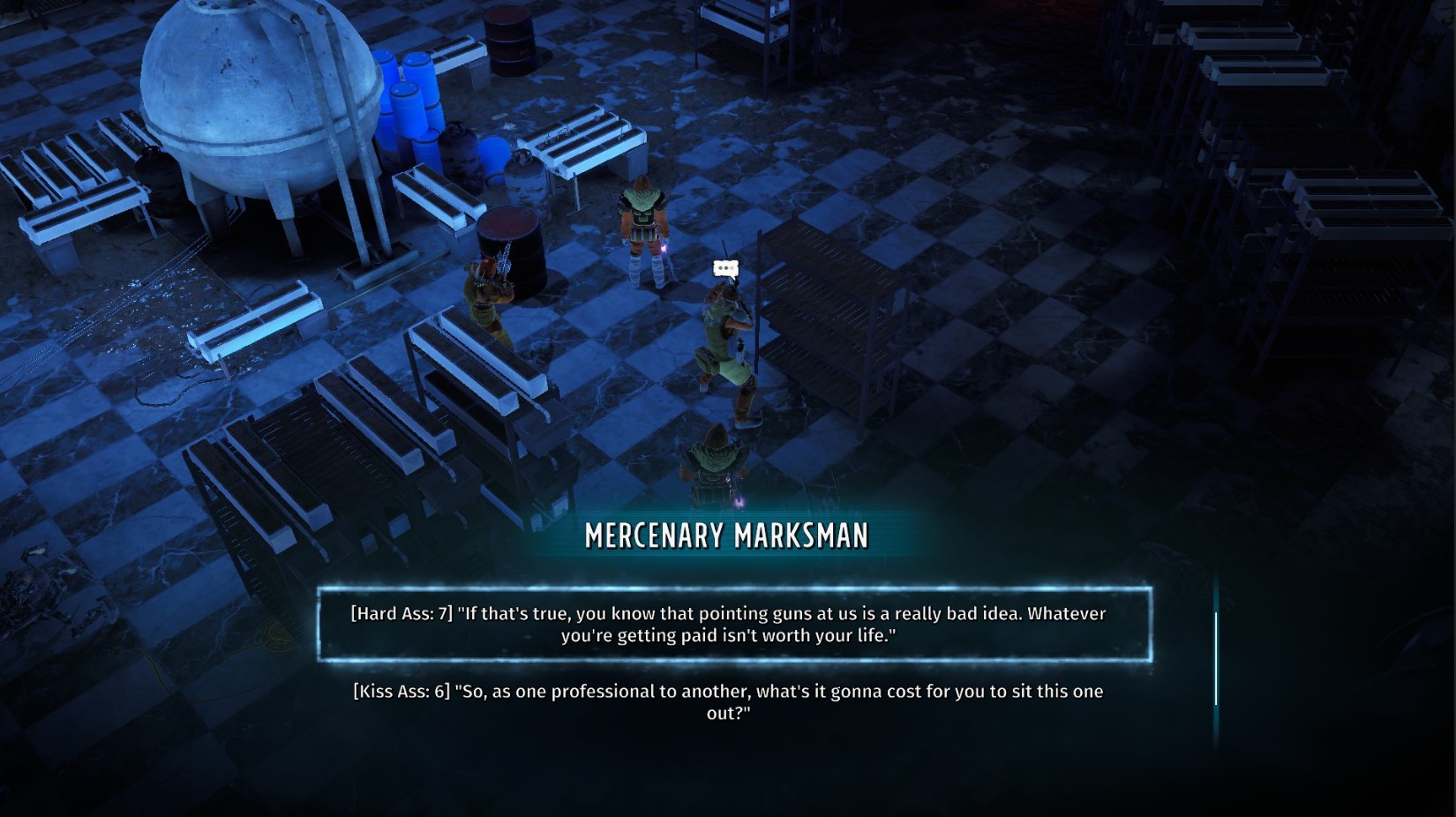 They’ll recognize you if your fame is high enough, but most importantly, you can get them to leave you alone with Hard Ass 7 or Kiss Ass 6, otherwise they'll throw down for a fight.

Either way, when they're dealt with head through the door on the right until you hit a Sneaky Shit 6 alarm door you can disarm.

In the next room there’s another group of mercs but these can’t be dissuaded. You can either attack them now or save them for later and sneak past through the basement to the south. 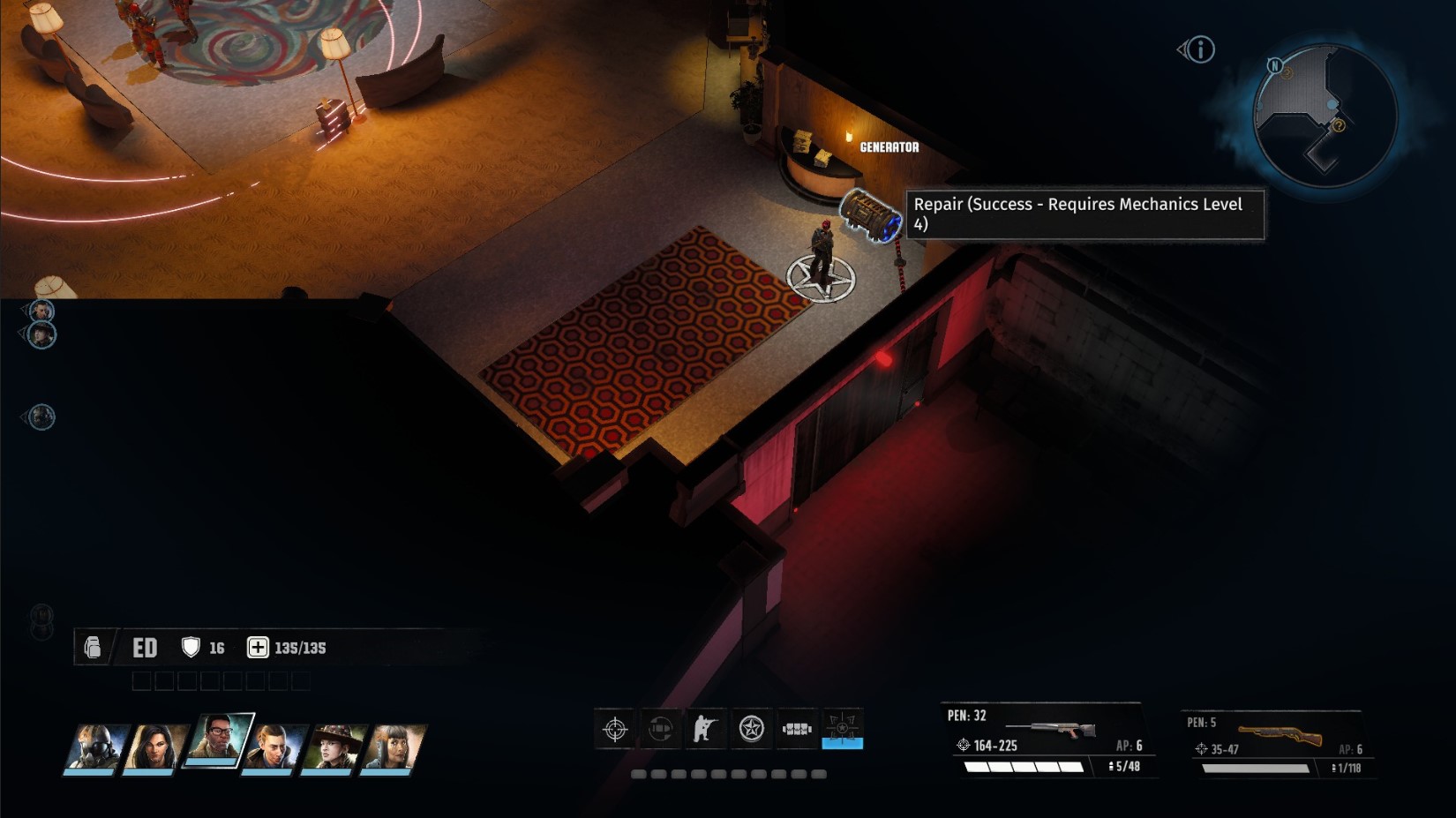 You need Mechanics 4 and then Mechanics 6 to get through the basement, where will be fighting some pretty tough giant frogs. However, there's some good loot on offer and it will make a later fight much easier.

It also means passing up a cyborg chicken in the north of the room up the stairs.

When you've downed the frogs, fix the mechanics 6 generator at the top of the room and grab the First Aid skill book from the bookstack to its left. Then sweep the rest of the room and head through the door that opens at the top. 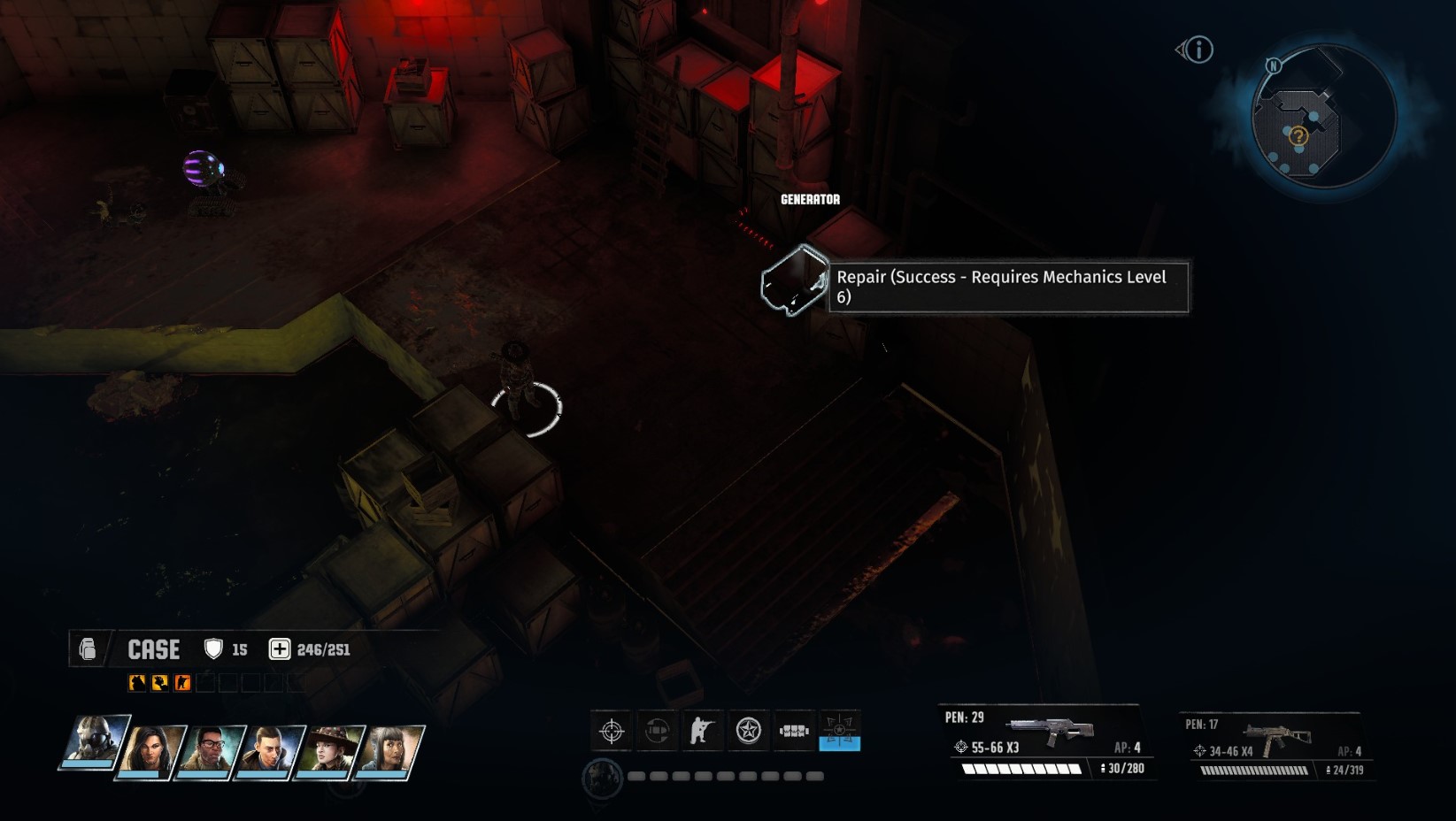 In the next corridor, turn left and disarm the trap. Then on the other side, you’ll be able to speak to Ironclad Cordite.

At this stage, you’ll only have dialogue options that say you’re freeing him - and you can give him some shotgun shells to have him join in a battle later. 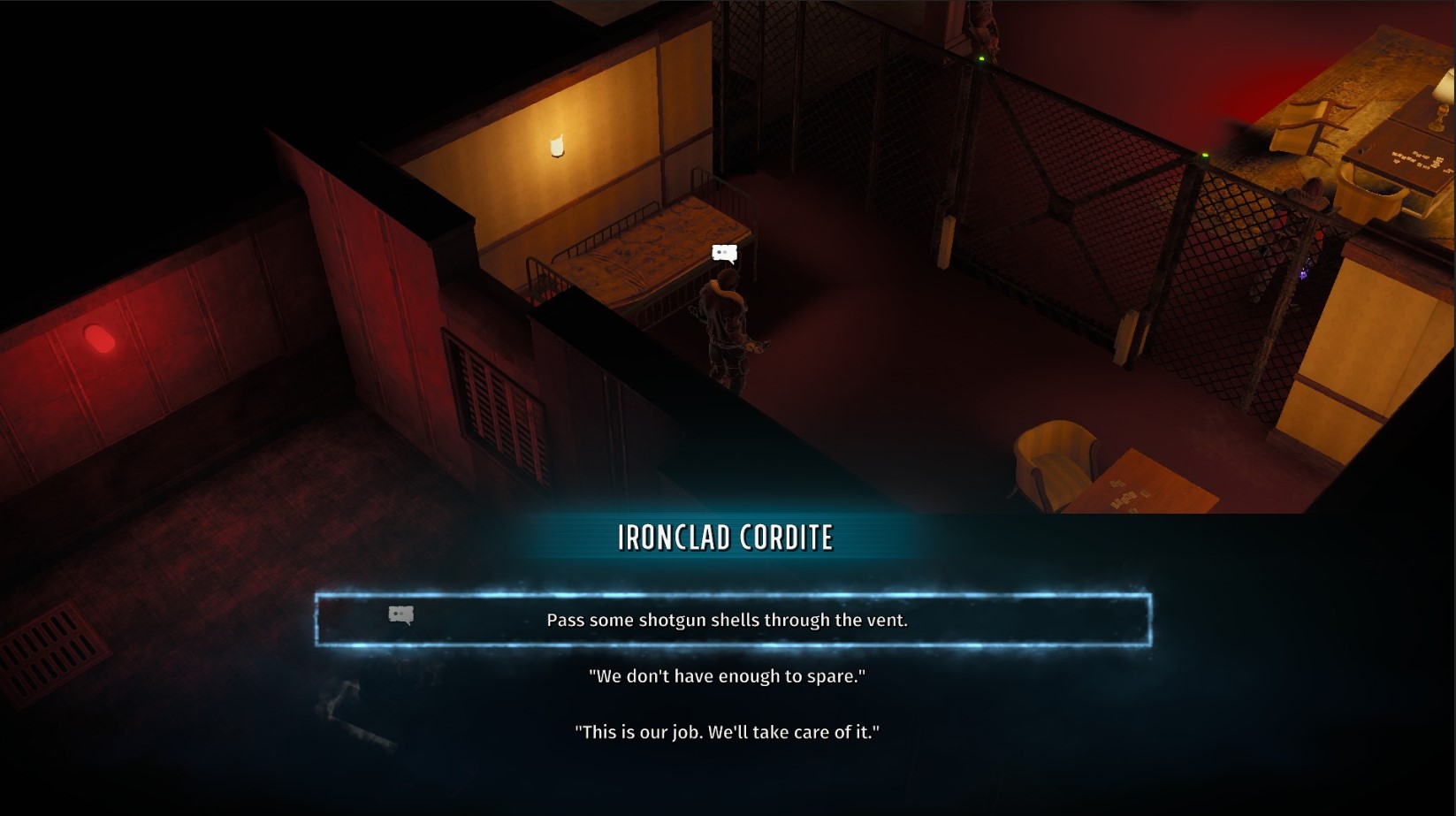 After you've given him the shells, your only option now is to return to the main room from before and take out the mercs.

When they're defeated grab the Cyborg chicken from up the stairs at the top of the room if you have an Animal Whisperer. Then continue deeper into the bunker.

In the next corridor there’s a Gas Hopper and a load of explosive mines to defuse. The makeshift jail where Cordite is being held is to the right, past the Explosives 4 tripwire, but first go left to the makeshift hospital over another mine.

You can try to intimidate the mercs into leaving but it’ll only demoralize them and start a fight either way. 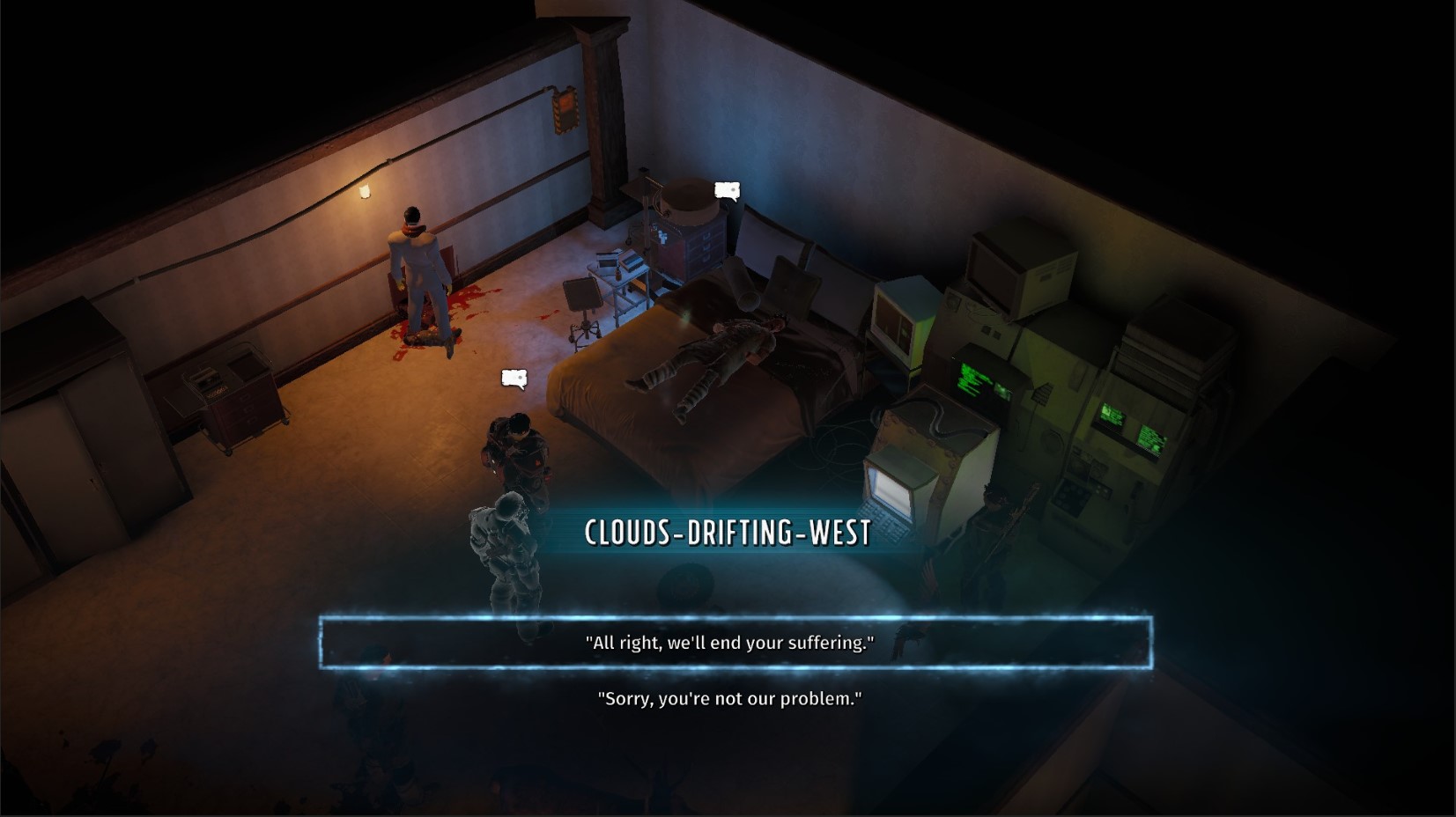 Now speak to Clouds-drifting-West in his hospital bed. He'll spill some troubling information about how The Patriarch keeps the Godfishers from attacking Colorado Springs. He’ll ask you to kill him, and you can do so by turning off the life-support machine next to his bed.

Over on the left-hand side of the room, the Lockpick 8 door is hiding a Creepy Doll.

Now head down to the makeshift prison - disarming the tripwire on your way.

Enter the room and walk forward - if Cordite has shotgun shells, he’ll start the party.

With the jailer mercs down, you can choose to bring Ironclad Cordite along with you as a companion. In the grand scheme of Wasteland 3's story, freeing Ironclad Cordite opens up the option to topple The Patriarch and take control of Colorado for yourself.

If you plan to turn on the Buchanans, then Cordite is a powerful ally. However, if you plan on staying true to your original mission of saving the Arizona Rangers above all else, then it's best to bring Cordite onto your team and keep him sat at Ranger HQ. 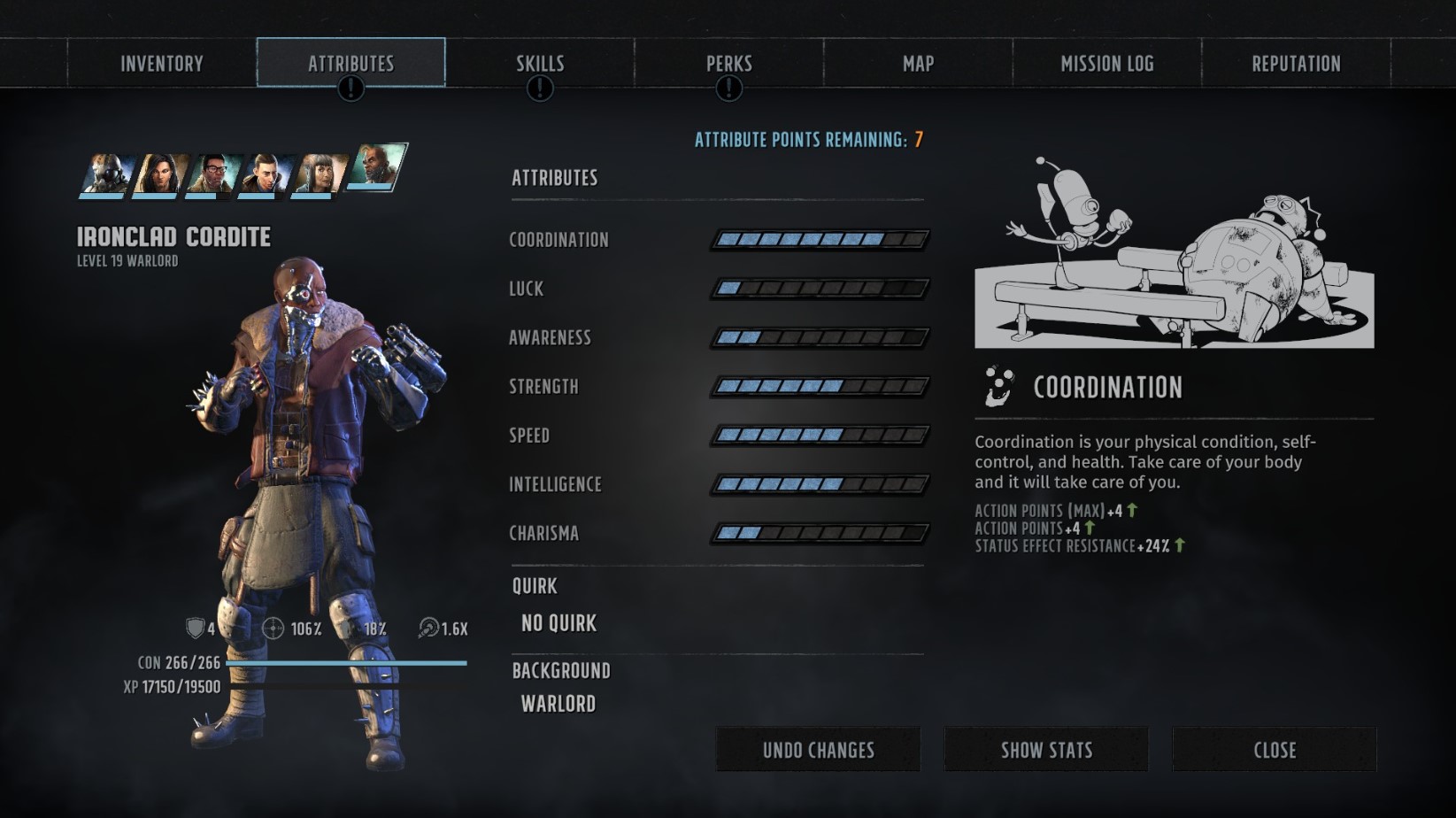 As for stats, he comes with:

On your way out you’ll be ambushed by more mercs unless you have high fame and then they’ll run away.

When you're back topside, Angela hails your radio on the way out asking after Cordite. It turns out she wants you to kill the Buchanans and not tell The Patriarch you rescued Ironclad Cordite.

Following her plan is a sure-fire way to ending your alliance with The Patriarch, but it is possible to keep them both sweet for now.

With Cordite in your party, make your way to The Patriarch's Palace and speak to him. He'll be disgruntled at best to see it was you that cracked his top-secret black site.

To make peace, say that it was Deth who told you to spring Ironclad Cordite, and that he can help get revenge on the Scar Collectors who’re helping Liberty. 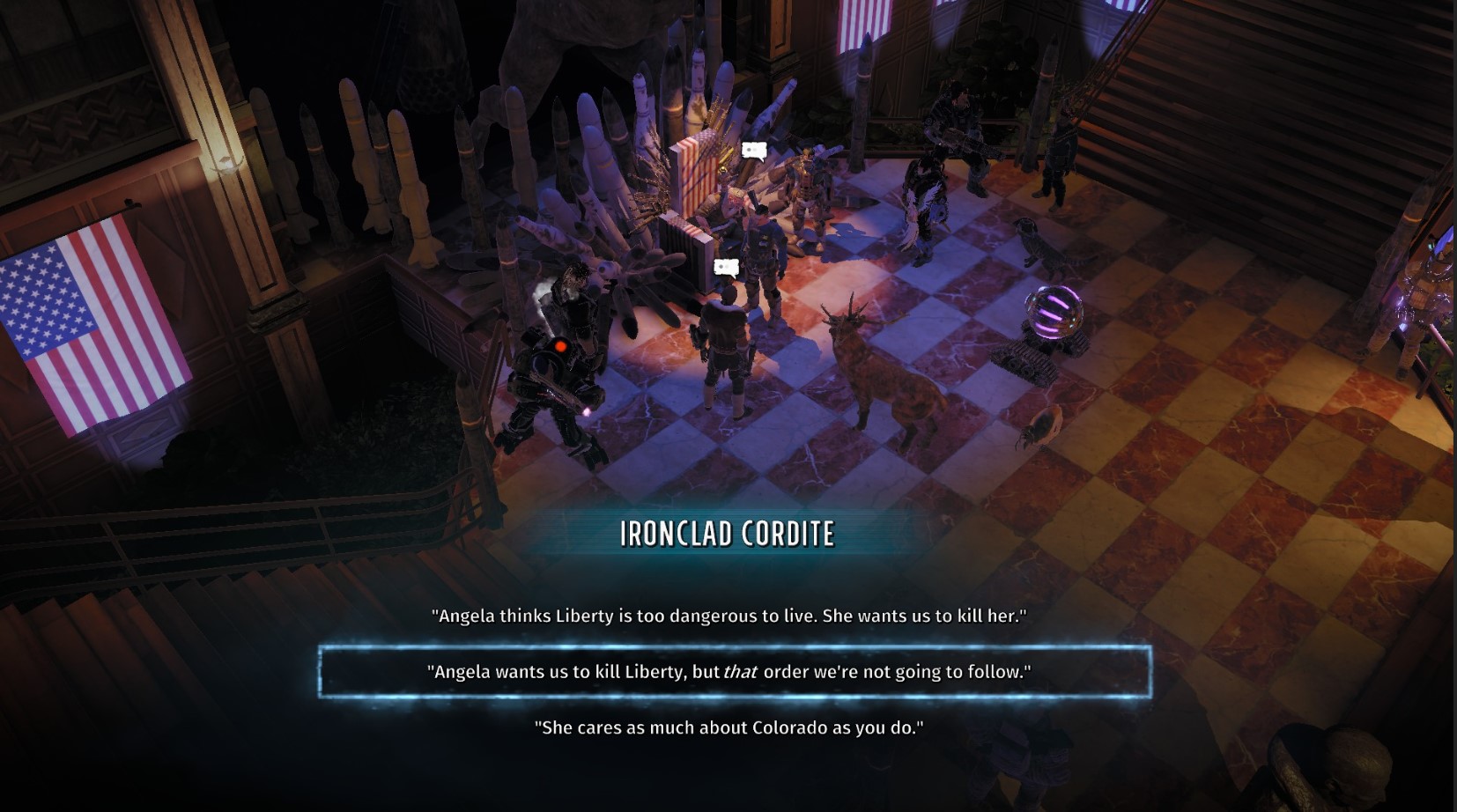 If you say that you’re not going to kill Liberty, The Patriarch accepts it as a good plan - but puts you on your last warning. Cross him again and you’re in hot water.

With this you're free to continue searching for the rest of the Buchanan kids, be that Valor in The Zealot, or Victory in The Psychopath. Or maybe even Liberty in The Traitor.

This is also a good time to tackle some side quests, especially if you've neglected Nightmare in The Bizarre and don't want the Monster Army to die.