After your conversation with Greatski back at HQ, your first quest in Colorado Spring is Cornered Rats. After the Dorsey raid there are still pockets of gang members within city limits, and Sheriff Daisy needs help clearing them out.

Go down the stairs and out of the command room at HQ towards the Colorado Springs sign. Then travel to Downtown via the glowing circle at the edge of the screen.

In the centre of town, there are multiple points of interest. The closest are Pillory Square and the Marshal Station. In the Square you’ll see strung up Dorseys and angry villagers.

Deal with the Pease family now if you want - which requires Kiss Ass 4 or 200 dollars to resolve - but you’ll find Sheriff Daisy in the building behind the pillories behind the Magistrate.

Speak to Lucia Wesson, the receptionist, and Sheriff Daisy. Accept the quest willingly and you’ll get Lucia to take along with you. 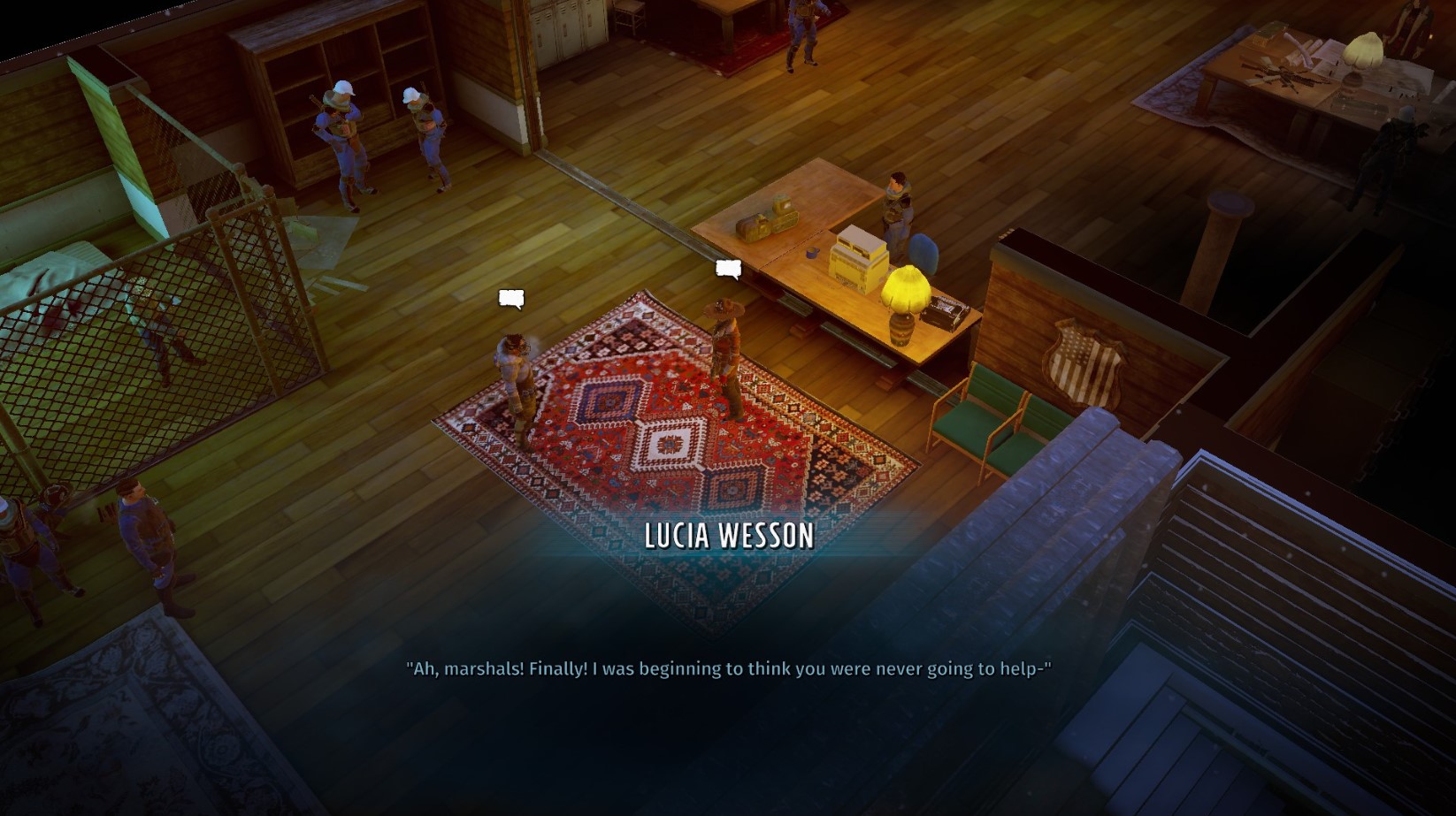 Wasteland 3 Finding the Garden of the Gods

The Garden of the Gods is found around to the north, past the paperboy.

Talk to Josiah on the way and he’ll ask you to clear some gang members out of his shop on your left. Agree and he'll offer to join you, but it’s better to leave him here and do it yourself and claim a discount from his shop on completion. 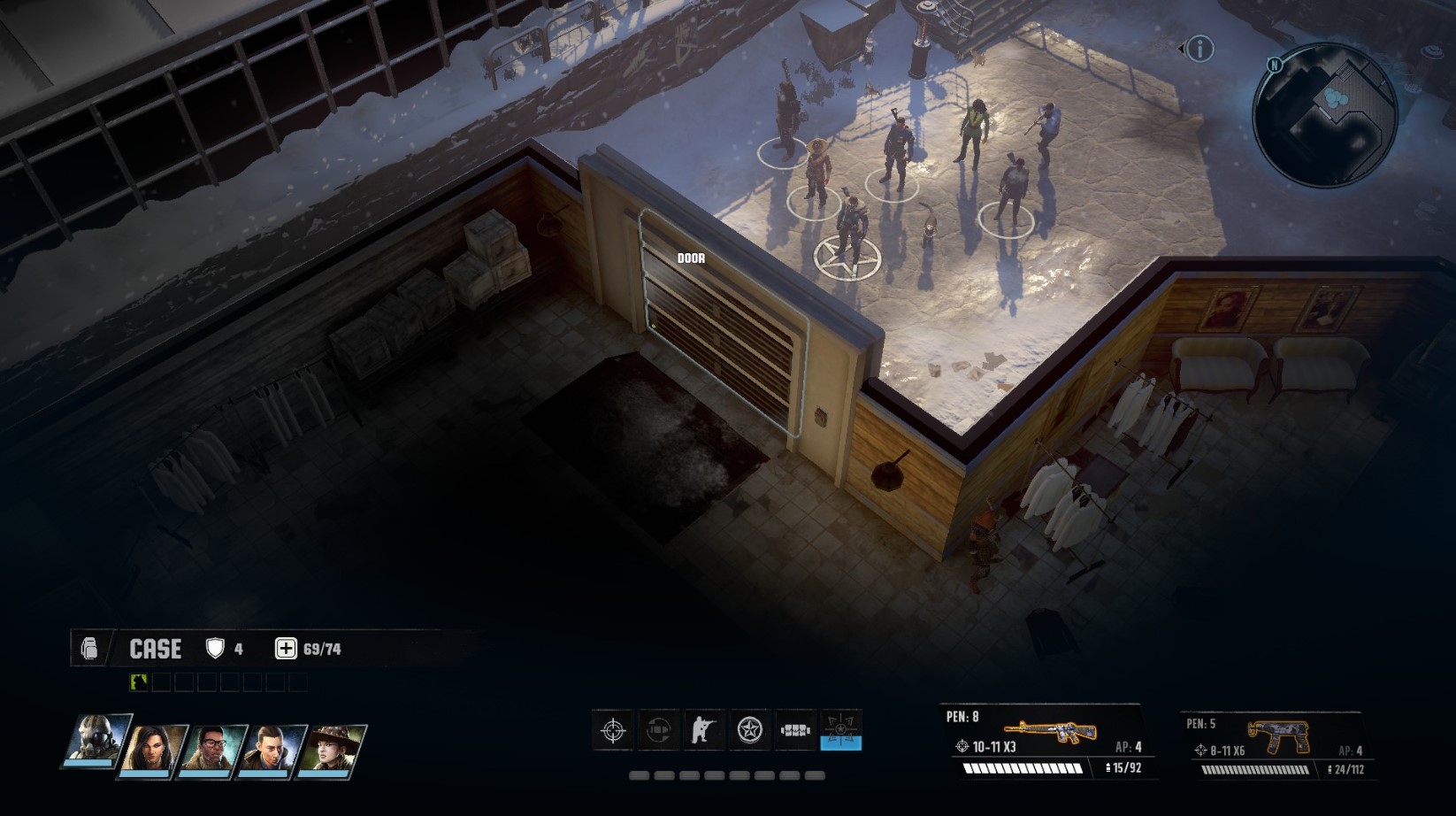 The Dorseys are in the shop just to the left of the shopkeeper and his wife - open the gate to enter. There are three Dorseys inside that you can get the drop on. This is good if you need a little XP boost to get the level and skill boost to save Austin Pease in the Square.

You get some cash, XP, and directions to the doctor. He reopens the shop later.

Now, go north towards Market Square and you’ll find merchants and other activities. In the east is a group of thieves that attack you if you get close - another XP boost if you need more stats to save Austin. There’s some good junk and loot to grab from them.

Be careful in the north of the square, there’s a landmine next to the northern stall that goes off if you get too close. Disarm with 1 Explosives.

Over on the left (west) is the medical shop, Auto garage, and the doctor for the Top Doc part of the Full House quest.

At the northern edge of the square is where you need to go to talk to Marshall Lupinski. 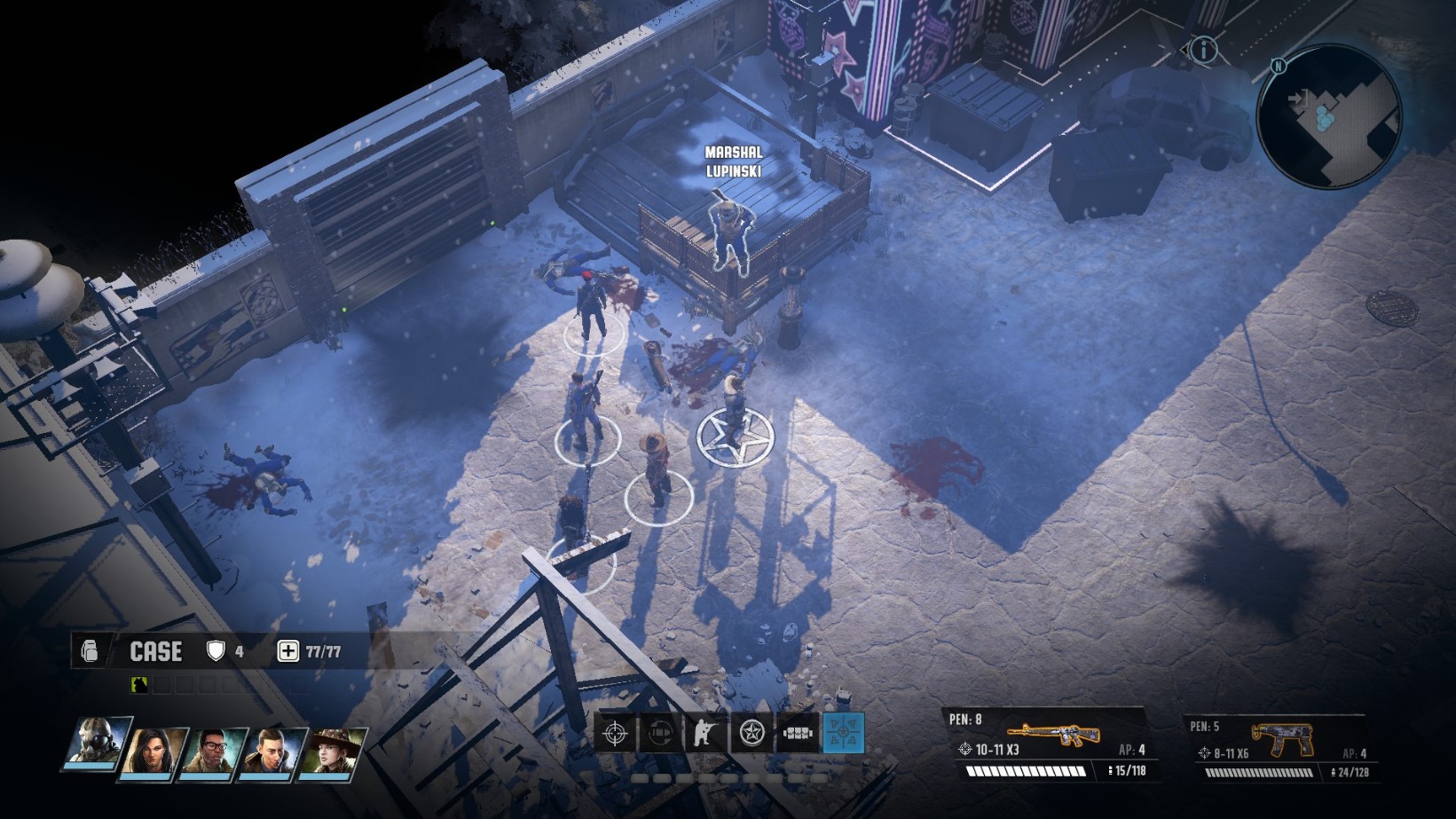 Speak to him and he’ll open the gate. Interact with the glowing circle to transition environments.

Wasteland 3 Inside the Garden of the Gods

As you enter the Garden of the Gods, Bellamy Ward will chin your radio in distress. Say that you’ll deal with the Dorseys yourself to get an extra point of Hundred Families reputation.

Now go up the path and use the panel on your right to melt the ice block next to it for a chest.

In this next part you have to intervene really quickly to save Bellamy or he’ll get shot and die. Run up and shoot at the Dorseys before they can kill Bellamy - I know Daisy said to talk to them, but she doesn't mind later.

If you have Hard Ass 4 you can intimidate the Dorseys enough to talk to you instead.

After dealing with them, saving Bellamy gets you another point of Hundred Families rep, then scour the battlefield for loot. Continue up the path and there’s landmines that need disarming on your right as well as a Mechanic 2 repairable door.

Behind the door is a follower cat you can charm with Animal Whisperer - Bellameow - and a load of loot. In the Lockpick locker at the back is a Brawling skill book, along with a Weird Science launcher. Step on the glowing green square to power the terminal and open the safe for more loot - this needs Nerd Stuff 3.

Continue around the corner to see a large group of Dorseys, Bloodbeasts, and “The Beast Master” mini-boss, you can sneak up on them to take the first shot, but strap in for a fight. 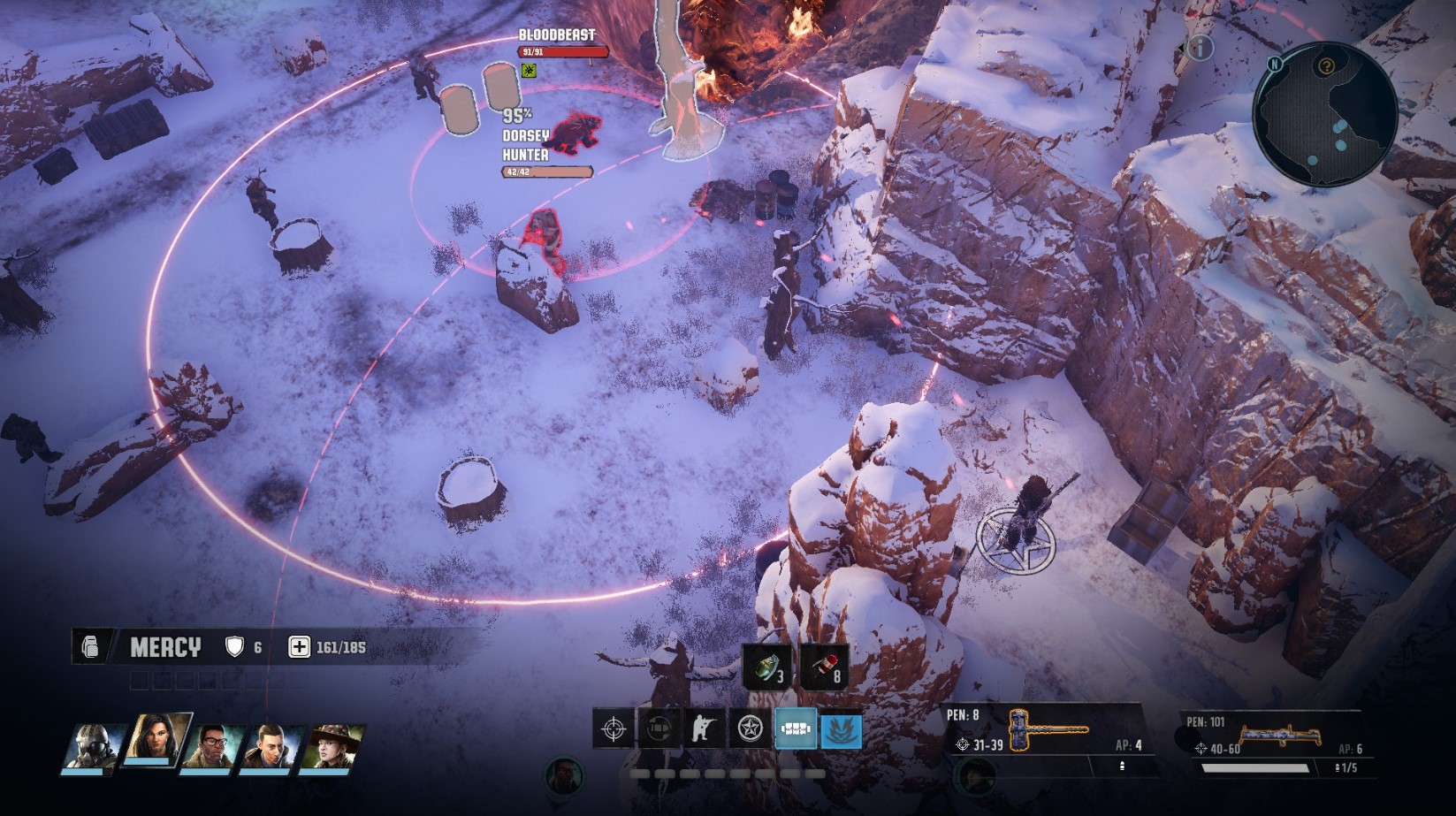 Beware that there are fire mines that need defusing on the right hand fork before the fight area if you try and approach from there. Individually position your party into cover, then fire the first shot or attack multiple enemies with a grenade.

Focus your fire on the Beast Master - who'll drop a unique hood ornament for your car - and the Bloodbeasts because they're the most dangerous.

Alternatively, you can sneak around the side of this area to the left, but you have to talk on the Waste Alpha Wolf instead. If you go around this way, you can use the Photon Matrix you found at Bellamy’s camp to fire a sun beam at the Beast Master, or try and sneak past the fight entirely.

On the other side of the area is a mass grave, where there’s a cyborg chicken that you can bring back to your farm with Animal Whisperer 4.

At the top of the hill on the right though, is Isaac Reed’s camp. Talk to him and it’ll transpire that he and the others helped take the hostages and get the Dorseys into the city - bad news.

Wasteland 3 What to do with Isaac Reed

Understandably distraught at the murder of her family, Lucia tries to kill Isaac Reed in cold blood. But not before he lets slip that a local mob boss, Faran Brygo, also had something to do with the attack. 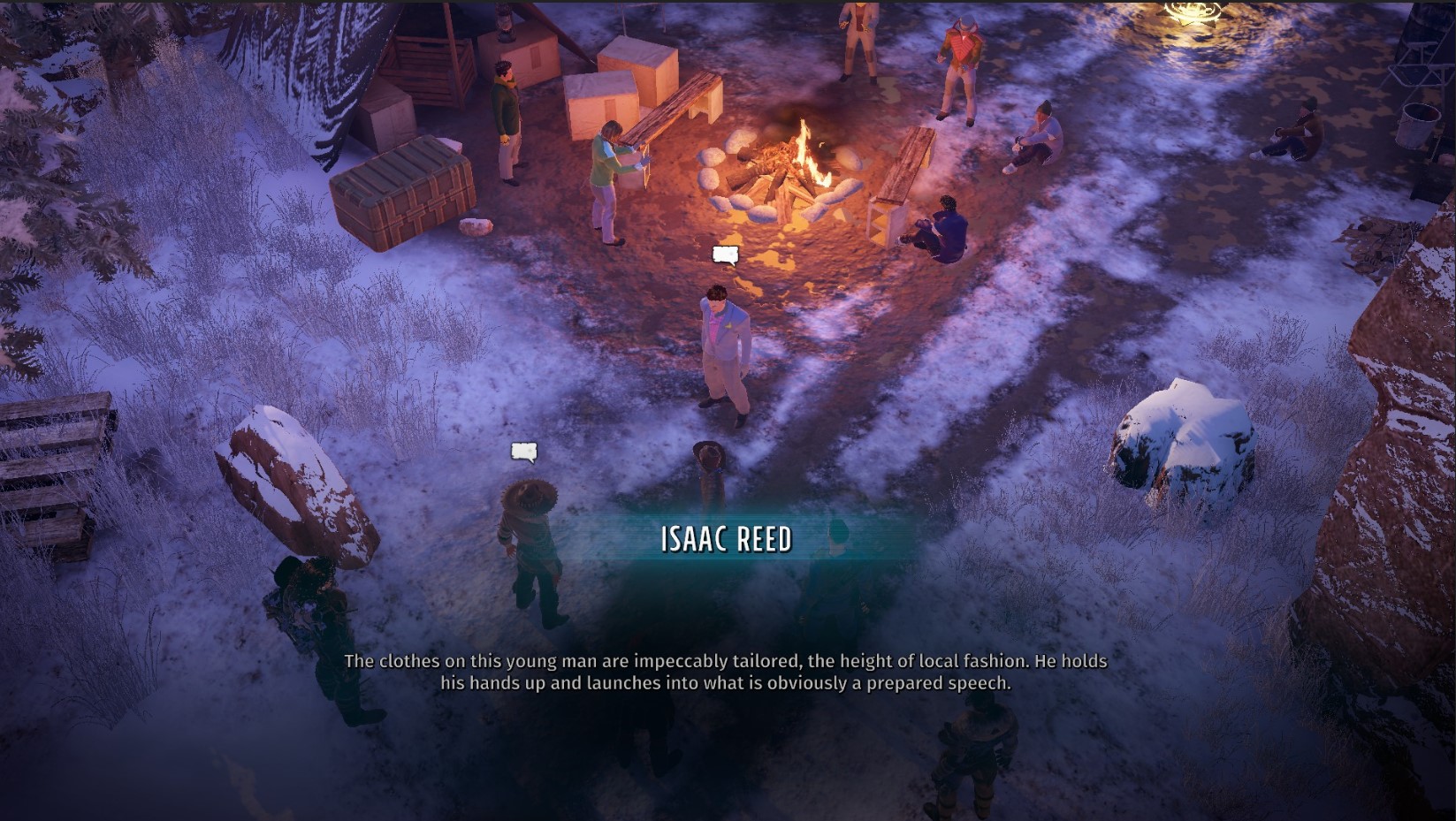 You can either let her kill him, or stop her and arrest him. Then you need to decide if you want them in your brig, or to hand them over to Sheriff Daisy. Since she’s who sent us over here, I chose to arrest Reed and turn him in to the Marshalls. I feel like this outcome strikes the best balance between building reputation with the Marshals and not letting Lucia do anything she'll regret.

With your decision made, interact with the glowing circle to return to town.

Back at town if you let Isaac live, Lucia’s not happy about it.

Say that justice belongs to the law and she accepts the wisdom of your answer. With that she’ll offer to join the Rangers full-time.

Return to Sheriff Daisy and if you gave her Reed and the rebels as she asked, you get +5 Marshal reputation and a glowing review.

In the subsequent conversation, say you’re on the same side for an extra +1 rep.

With that you’ll get the offer of Hope Emerson to join your HQ as the Jailer. Accept right away, or decide after you’ve spoken to her - either way, she's on the team.

After a job well done, Daisy decides to tap you up for some more work. She's been after Brygo for years, and sent an officer to his club who hasn't returned.

Your next mission is Big Trouble in Little Vegas, which we also have a guide for, here.

Or if you'd rather go after garage staff and gain entrance to The Bizarre shopping mall, try Unwelcome Guests instead.