Right at the start of Wasteland 3, your first major, multi-part quest is Full House. Completing it will take a lot more time and effort than it first seems, but here's how to get it done.

With the HQ computer active, talk to Sergei Greatski to start building your squad. When you’re done, he’ll push you to build up your base of operations. Giving you a hint at another quest.

You now have two objectives:

To start the survey of the base, you need to go right or left to the adjoining corridors from the central stairs to the command computer.

To the right you’ll find poisonous razorbacks in the rooms behind the gates - which you need to defeat - then further around the corner you’ll meet a group of refugees.

You can send them away or let them stay. Letting them stay makes you liked by the wasteland settlers, while kicking them out is the opposite.

They try to make it up to you for letting them stay, but Kwon says it’s more difficult to keep order and recruits won’t like it. However, I'm yet to encounter any downsides.

Del Hackett asks you to find Andy, another refugee.

Continue down the stairs past the refugees and you’ll be in the brig with The Prisoner. Grab the master key off the table and interact with the body in front of the terminal in the centre.

Use Perception or First Aid 3 to search him over and find a half eaten mushroom in his pocket. Look on the terminal and you’ll see there was a power surge followed by multiple login attempts. 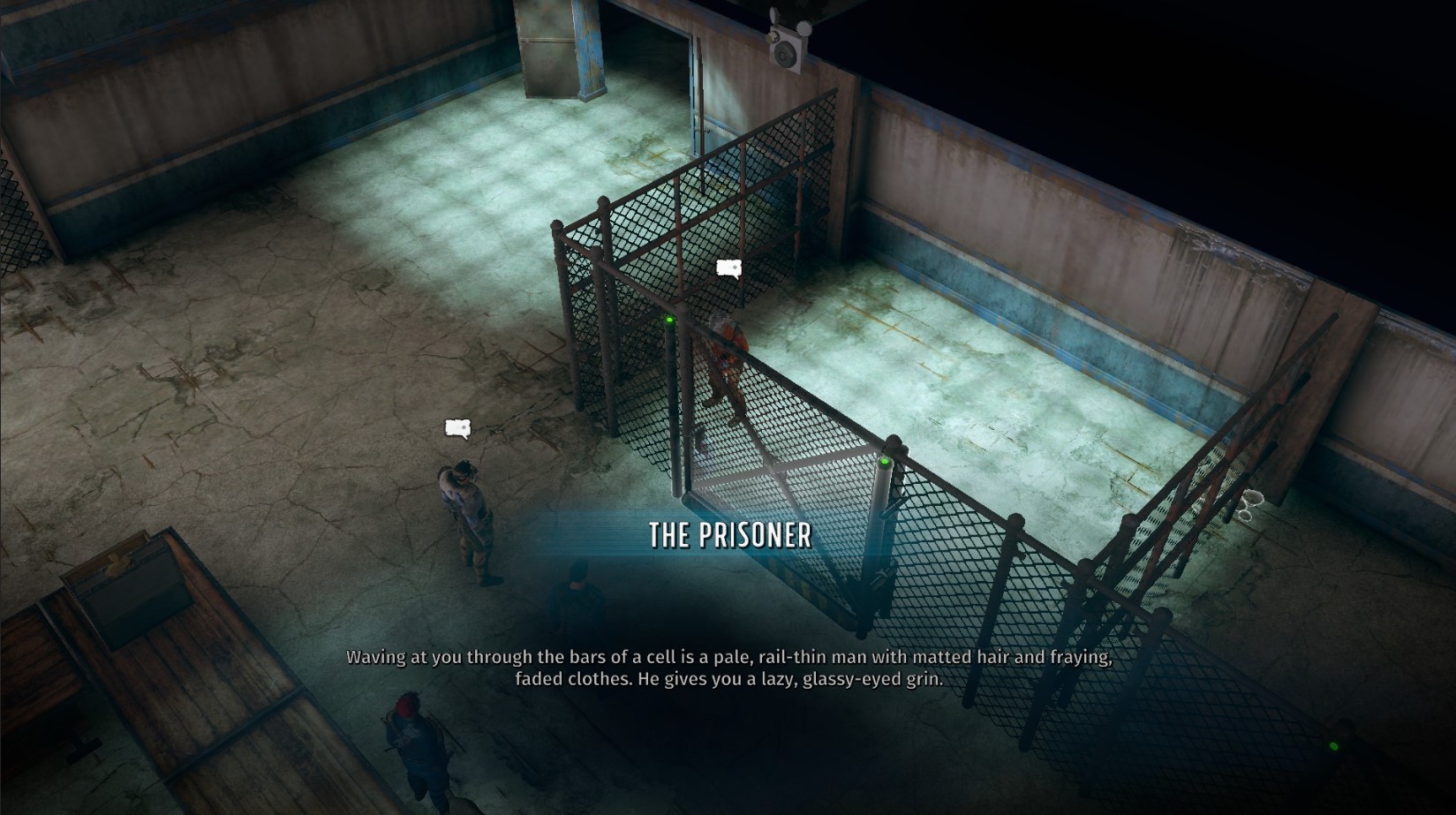 Talk to the prisoner and he’s a thoroughly charming fellow, but thanks to finding the mushroom in the pocket of the dead refugee and the multiple login attempts, you know he’s not being on the level with you.

The dead guy is Andy, so you can return and tell Del what happened. Marshal Kwon’s advice is to keep him in there, but later your brig warden will tell you to release him. If you let him out, this is “not the last we’ve heard of him…”, but the thread won't return for a long while.

On the left hand side of the building, the first door on your left is the garage.

Inside there’s a broken giant robot, a dead body, and a terminal. Use the terminal to read some logs, then nip over to the 2 Lockpick truck on the left to grab a repair kit.

Examine the corpse next to the truck and you can determine she died by electrocution with 2 First Aid. You can now speak to the robot. If you try to repair it, it attacks you. It’s not hard to defeat, especially if you have Marshall Kwon, and killing it rewards you with a cool energy assault rifle and a slicer dicer module you can build with 7 Mechanics. 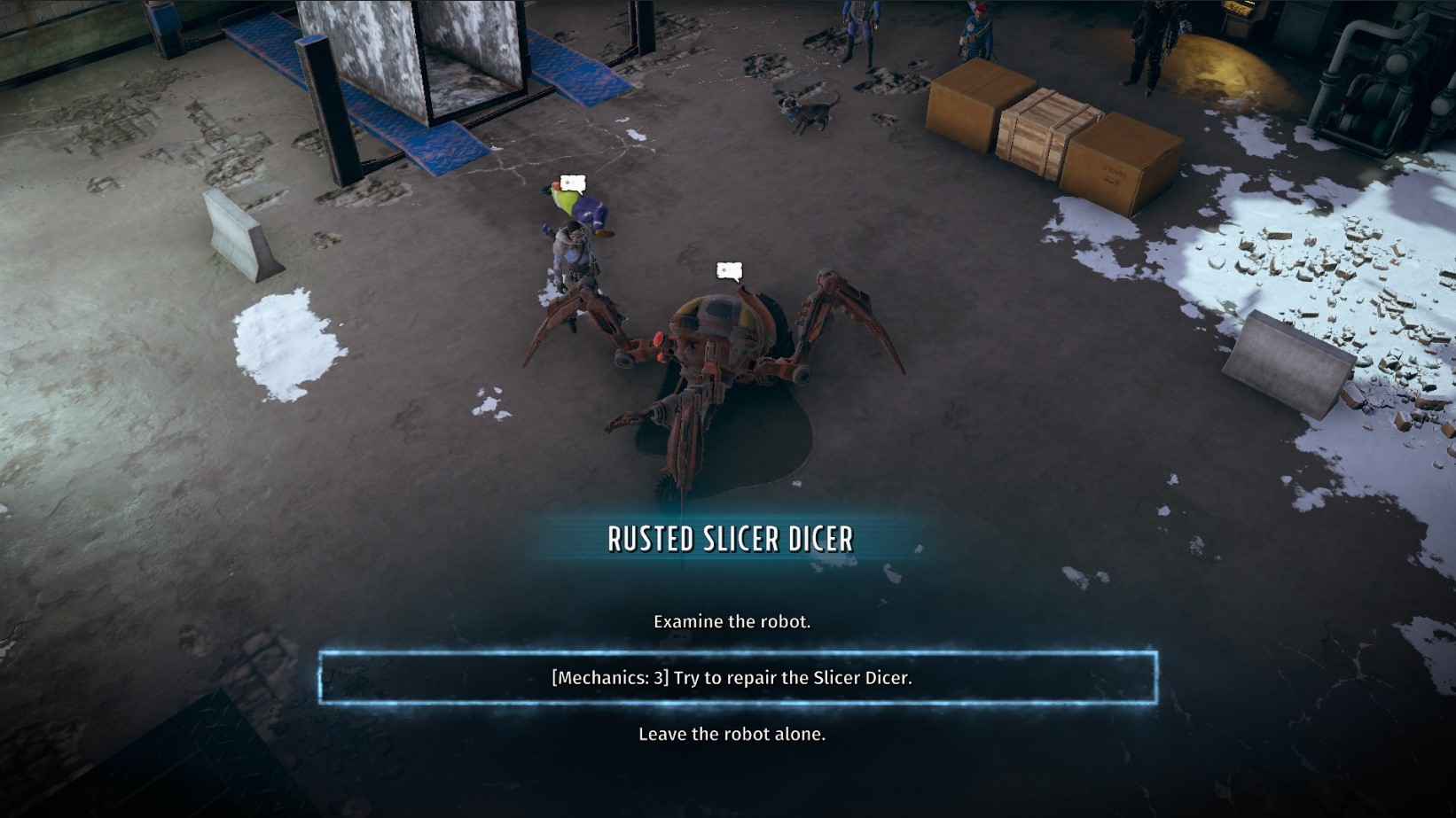 The first room on the right of the hallway is the med bay, which you can interact with the bodies to determine the cause of death.

At the end of the hall is the armoury, which is booby trapped to high heaven. You need 2 Explosives and decent Perception to spot and disarm them. Just don’t run forward too far and set them off.

There are two tripwires, one right after the door into the armoury, then another right behind the 1 Lockpick door which requires 4 Explosives. It’s only one grenade in the box, but you can tank the hit and walk through if you really want.

You can find a few more bits and pieces around the outside of the HQ as well. Including some more chests and dog companions for characters with Animal Whisperer.

There’s a pen with a cyborg chicken too, which you can collect more of as you continue your journey across Colorado.

Once you’re ready, head to downtown Colorado Springs, and there are four different quests you need to complete to get the staff you need.

We have full guides for some of the four quests that make up Full House, since there are multiple solutions for each one.

How to Recruit a Brig Warden for Ranger HQ

This is where you help clear out the remaining Dorsey gang members from Colorado Springs.

How to Recruit an Armoury Warden for Ranger HQ

For this quest you're tracking down a missing Marshal who's taking on the mob.

How to Recruit Garage Staff for Ranger HQ

Colorado Springs has a problem feeding its people, and you need to solve it.

How to recruit a doctor for Ranger HQ

Top Doc is much simpler to complete than the others, so we'll run through it below.

As you make your way into the Market Square area of Colorado Springs, look to your left on the west side of the Square.

In the garage area, you'll see some auto shop workers and the Cotter family milling around. Inside the garage, in the small room on the right, you'll find the doctor.

He's a little in over his head, so offer to help. You'll need a Suture Kit, a Medic Pack, and an Injury Kit to complete the quest, which if you don't have you can buy reasonably cheaply from Milk Teeth in the Market Square. 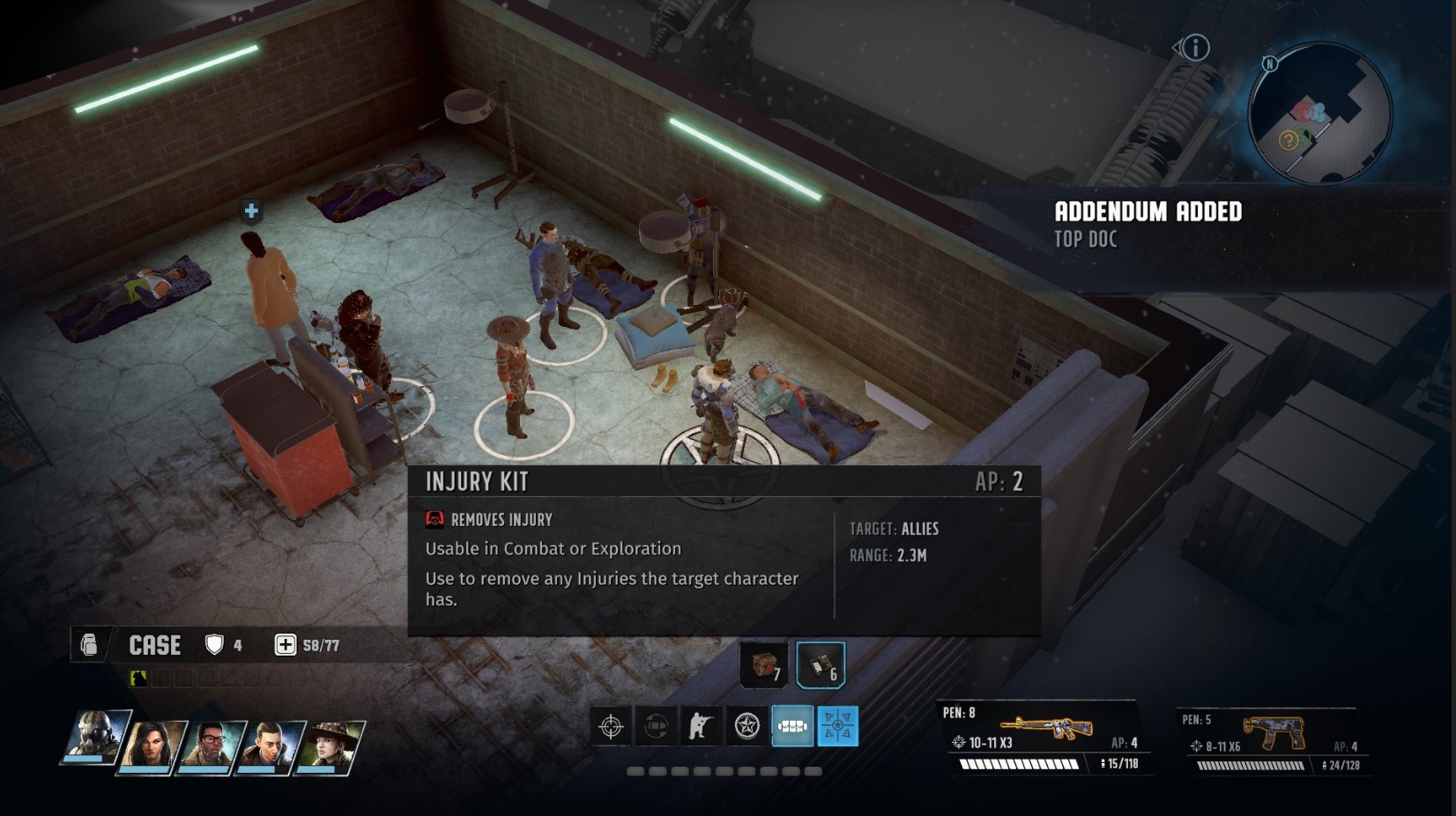 Go into your inventory, equip the three items to your quick slots as you need them, then get ready to do some doctorin'. The patient with the blood droplet above their head need the suture and the other needs the Injury Kit to remove their status.

When you're done, speak to the doctor again and he'll ask to establish a hospital at your HQ to treat his other patient. Agree, and he'll join up.

For more on Wasteland 3, here's our guide to character builds, attributes and skills.