When you've finished your business with the remaining Dorseys in Colorado Springs, Sheriff Daisy sets you off to investigate the revelation from the end of that quest - that local mobster Faran Brygo is helping the Dorseys take shots at The Patriarch. Here's how to complete Big Trouble in Little Vegas in Wasteland 3.

She’s already sent an officer, Delgado, to the inside, but he’s gone dark. Your mission is to find the Marshal, confront Brygo and make it out alive.

Before we start, to bring this quest to a non-violent and most satisfying conclusion, you need at least Kiss Ass 3 and Nerd Stuff 4. Consider investing in those skills as you make your way through this quest if you haven't already.

His club, Little Vegas, is to the north of Market Square, next to the Garden of the Gods you visited in Cornered Rats.

Inside, head into the central room and speak to the bartender. Ask him about Delgado, but he won’t budge.

On your right is Charley Knowes, Brygo’s Capo. He won’t talk about Delgado either, and won’t let you search the back rooms without the go-ahead from his boss. 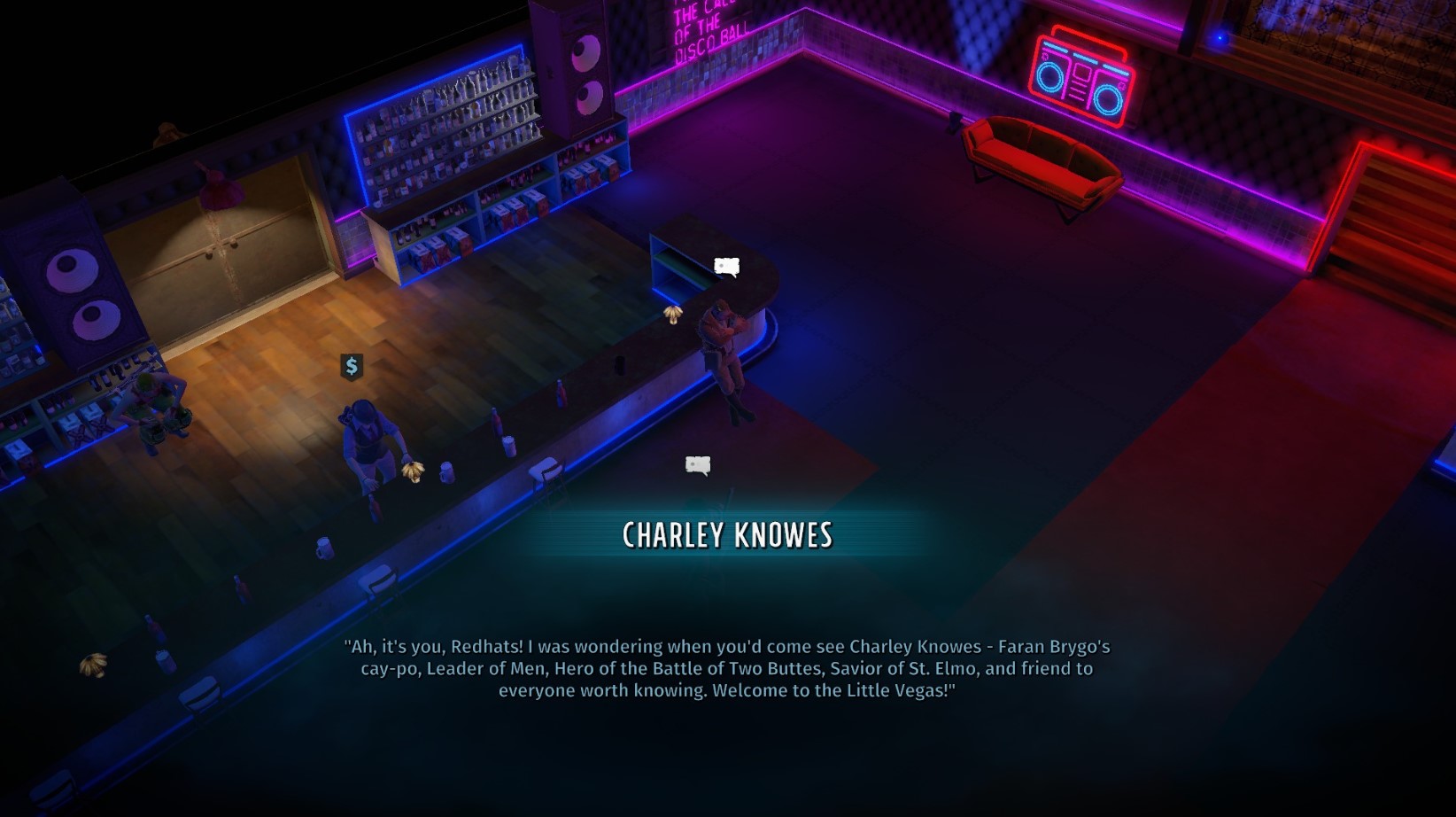 Now it’s time to meet with Brygo. Head over to the staircase on the right hand side of the room and the tough will let you past. But not before spilling how you could burn the club to the ground - this information will come in very handy later.

At the top of the stairs you’ll find Faran Brygo, talk to him, stay on his good side and be truthful about Vargas.

Ask him about the investigation, then Delgado, and you can get some extra info with Kiss Ass 3.

Next, ask about the painting behind him - which is suspiciously shiny if you ask me - with perception 4 you can be a bit cheeky and grab some extra XP.

Wasteland 3 How to get to Delgado

So, Brygo is a brick wall. Head back downstairs to the main hall, then across the room and towards the other staircase.

Talk to Shakes on the way and he’ll clue you into a stash of drugs and that the merc, Boulder, is a bad dude. Agree to grab his stash and he’ll give you the safe combo.

Now head up the stairs. If you have Kiss Ass 3 or Hard Ass 4, take the first left into the private party room and talk to Boulder. If not, don't touch the room with a barge pole.

If you enter, ask him why they’re celebrating, then about Delgado. Close the conversation and Boulder tries to start a fight - which you can avoid with Kiss Ass 3 or Hard Ass 4. If you do the Hard Ass route, Boulder opens up about Delgado and tell you where to find him.

For the Kiss Ass option, he just lets you go and you can open the safe for Shakes.

If you can’t do either, they’ll absolutely gank you and start a huge fight - not worth it.

So, if you have Hard Ass, you now know where Delgado is.

If you don’t have 4 Hard Ass, you need to go around the corner to the Brothel and speak to Ken Doll. He wants 100 bucks - or less if you have Barter 5 - for the gossip.

Now you know that Delgado is hidden in the back room, head back to Charley. Say you know about Delgado and he’ll level with you. 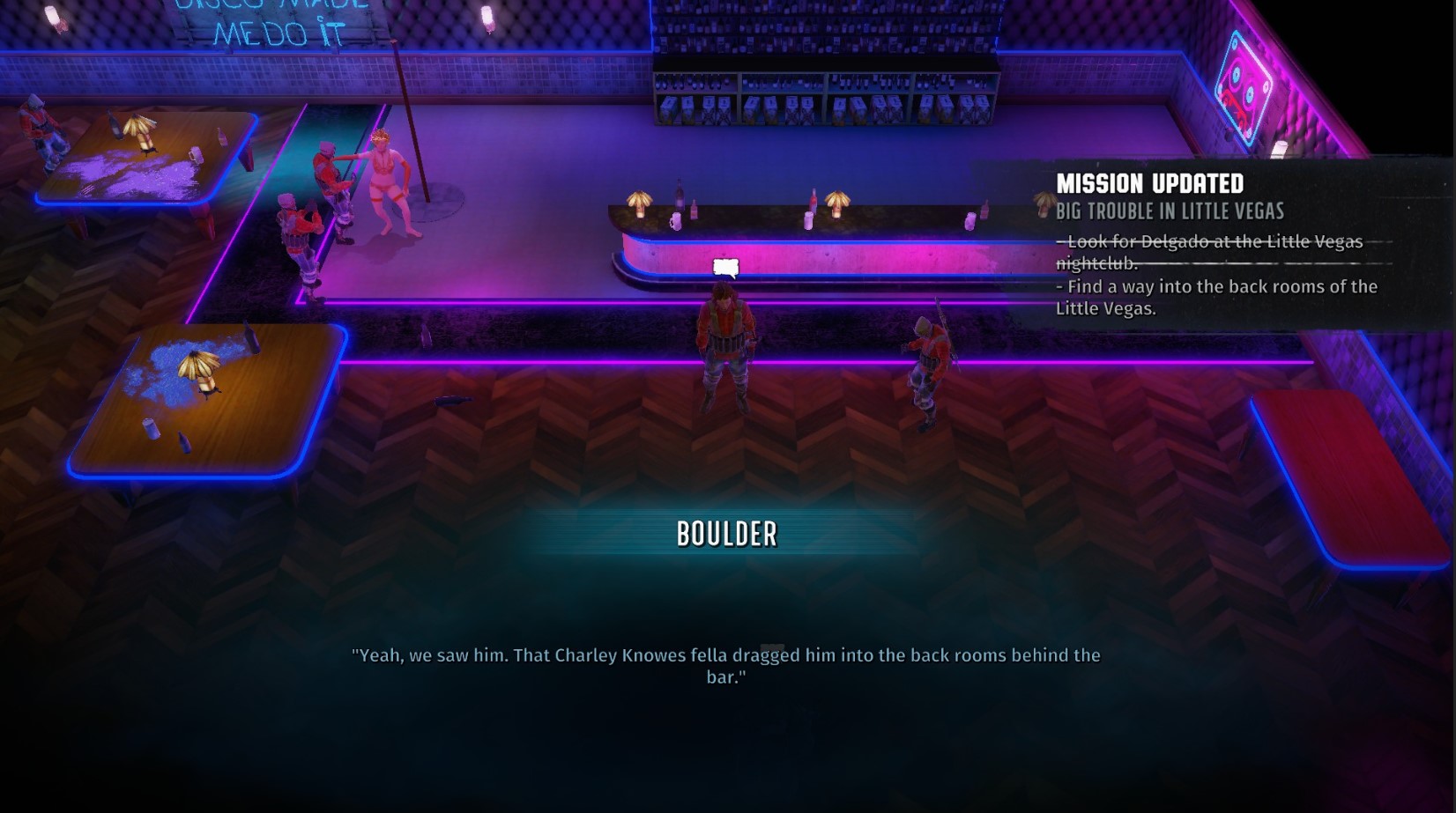 He swears that Brygo didn’t throw in with the Dorseys, but someone in their outfit did - if he gives you a name, you need to prove that they were on their own to get Delgado back. That name is: MacTavish.

Wasteland 3 What to do with MacTavish

MacTavish’s Machine shop is south of the pillories you saw when you first came to Colorado Springs. Make you way over there and interact with the glowing circle to transition.

Inside there are some shady looking mercs. Try opening a few boxes, and after three scoldings they’ll attack you.

Once they’re dealt with - I’d recommend placing your mechanic next to the generator to blow up the turret immediately - speak to the intercom in the top corner of the room.

Say that you don’t want to break down the door and MacTavish will let you in.

In the conversation, say that he seems to know a lot, then that you’ve got info that he set you up. After his taunts, remind him that Brygo isn’t there to save his life and he’ll squeal for 500 bucks - 300 with barter 4 - or you can just threaten to turn him in to the Marshals and he’ll spill for free. 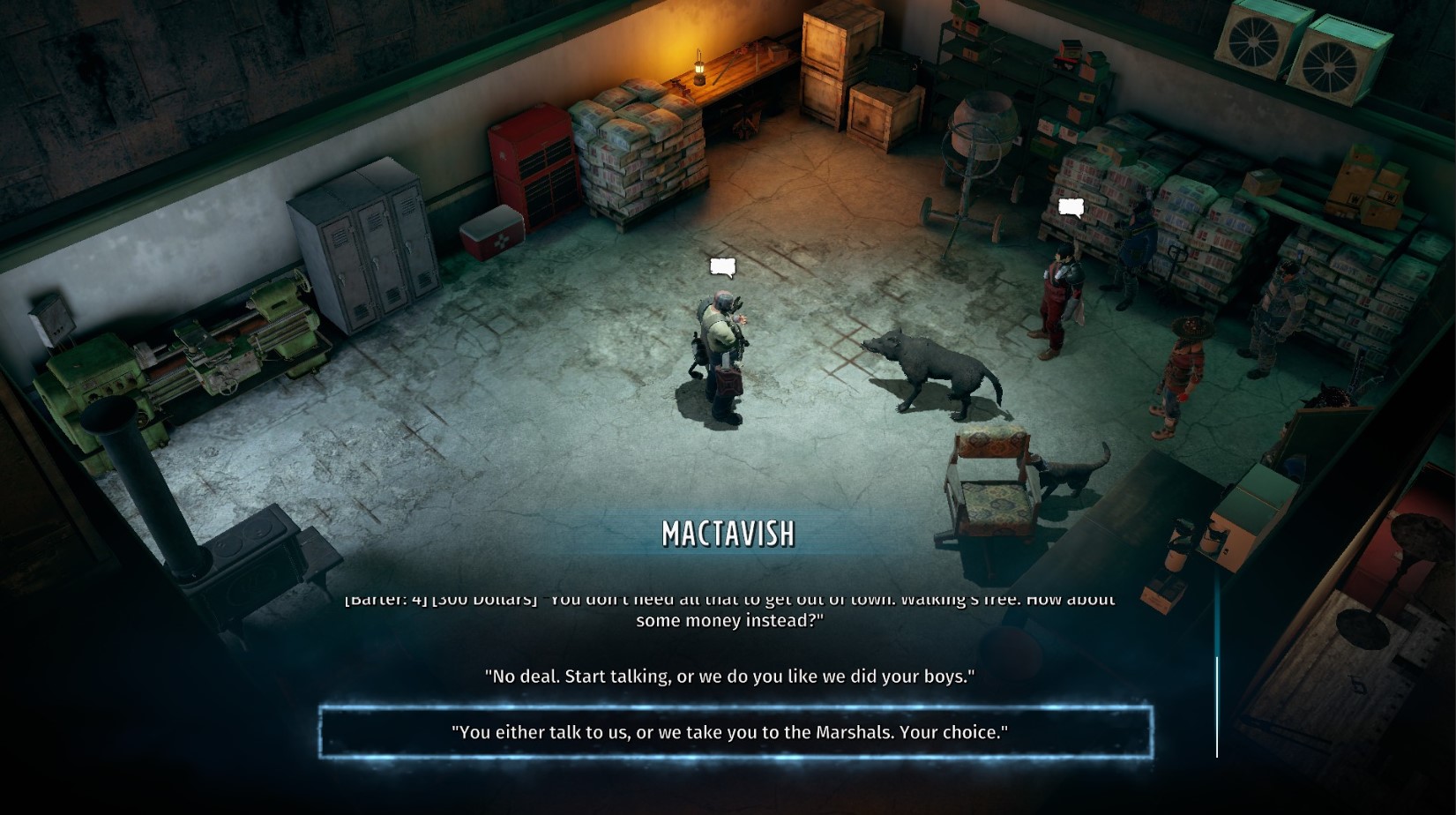 You can either take pity on him and let him go, lock him up, or kill him. Killing him gets you his unique mask that gives +1 Toaster Repair, +1 Mechanics and +3 Armour.

Arresting him and turning him in to the Marshals seems to keep everyone happiest, and grants you some reputation.

Regardless of what you do, you now need to head back to Brygo. But first search the lockers at the back of Mactavish’s room for some evidence and a Mechanics skill book.

Back at Little Vegas, Charley will greet on the way in. Turns out he’s played you, and Brygo knew nothing about the deal. He tells you to go upstairs and speak to the boss before sidling out of the door.

To end this peacefully, you only have one choice: burn everything to the ground.

Remember the terminal from earlier? Now there are two nightclub patrons squaring up to each other next to the dancefloor. With Kiss Ass 3, you can egg them on, drawing the terminal guard away from his post. 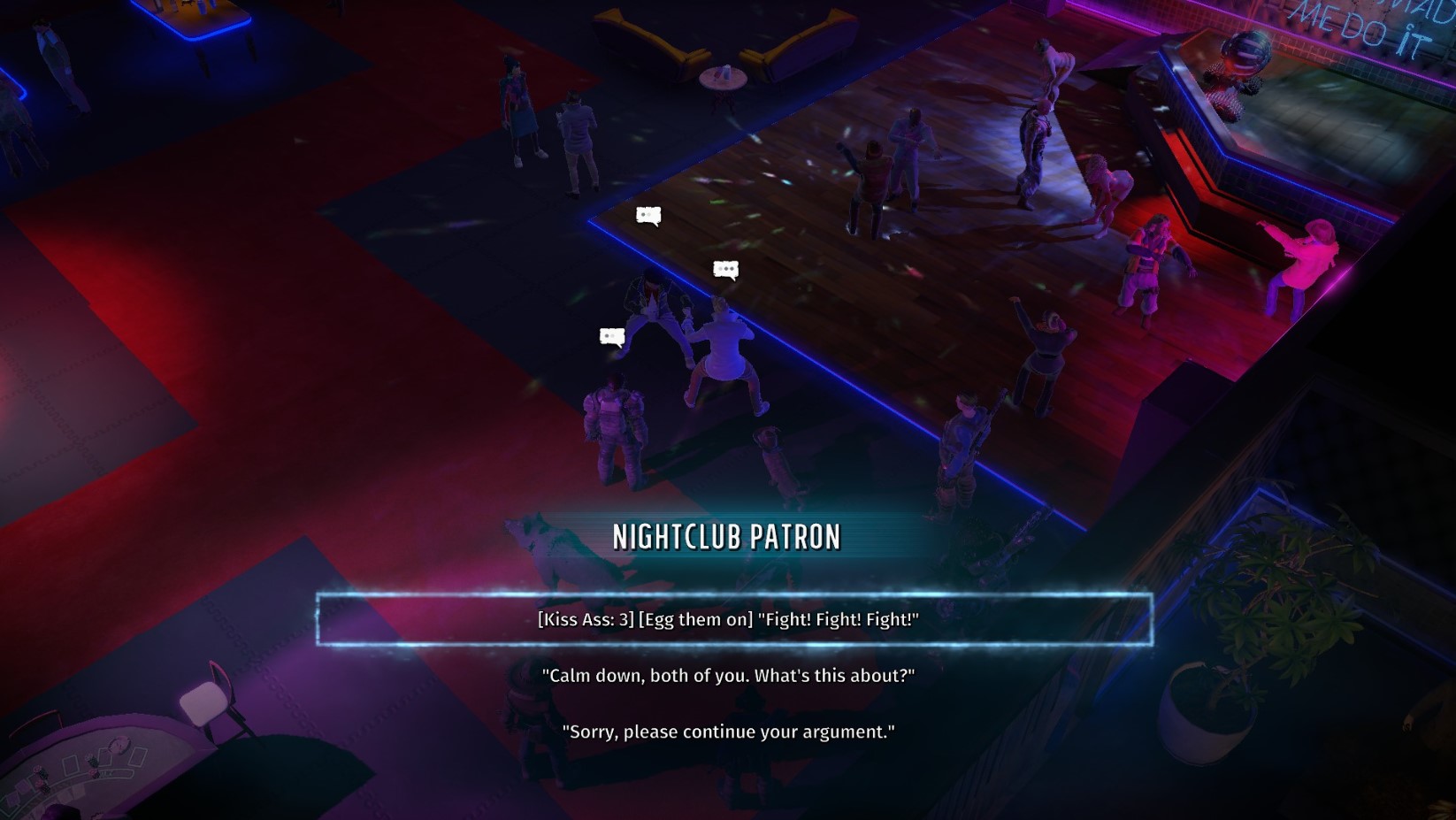 Now with Nerd Stuff 4 you can hack the computer and rig the ventilation system to explode. With the ace up your sleeve, climb the stairs to see Brygo.

Say to him that you know it was just MacTavish in cahoots with the Dorseys, then choose the top "arrest" option where you threaten to burn down the club. Brygo would rather leave in irons than watch his life's work go up in smoke, so he agrees. 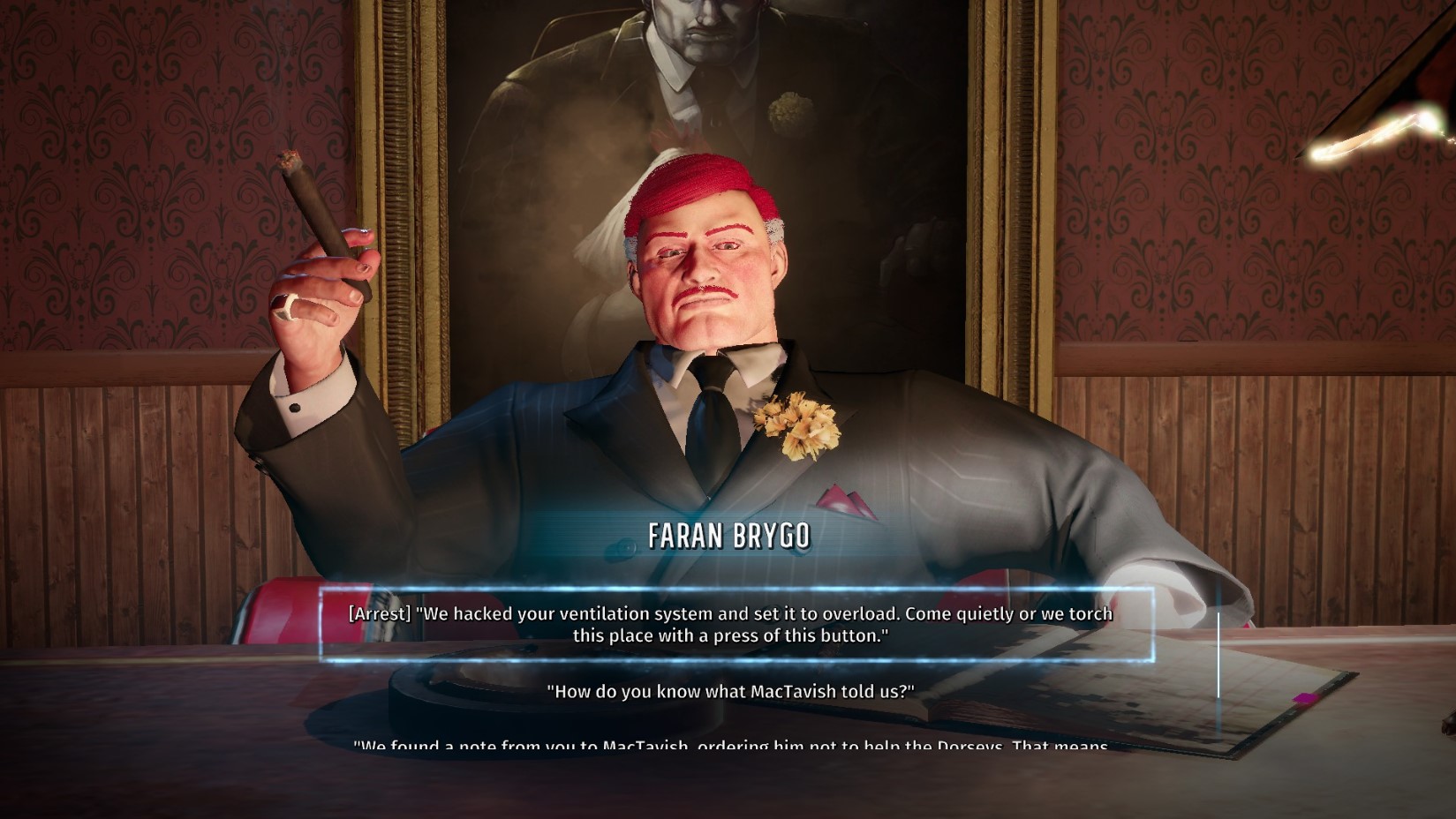 If you can't complete those skill checks, things get really messy, really fast. First when you go to see Brygo, you can offer to cut a deal where you let him off and get him to supply your HQ with an armoury.

Having career criminals staff your base isn't a great look, but agreeing is the only way to end the conversation without a fight. If you antagonise Brygo, you're in for a massive fight with every gangster and stripper in the building.

If you play nice, as you leave a band of corrupt Marshals block your path. Even if you tell them it was MacTavish all along they’re not having it - you either have to kill the cops or the gangsters.

If you side with the gangsters, then it’s an easier fight because you have a lot of help, but Daisy is not happy in the slightest.

The only way you can stay on the Marshal’s good side in this situation is to throw in with them and try to take out every last mobster.

Whatever you path, when the coast is clear head to the back room and interact with the computer to free Delgado. With him in tow, head back to Sheriff Daisy in Pillory Square.

Based on your actions, you'll either gain or lose Marshal reputation. However it shook out though, you now have the required specialists for the Full House quest!

You probably just have one left - the garage employees, which you can recruit in the Unwelcome Guests Quest.