We take the three factions to battle, and speak to game director Philippe Boulle about single and multiplayer balance. 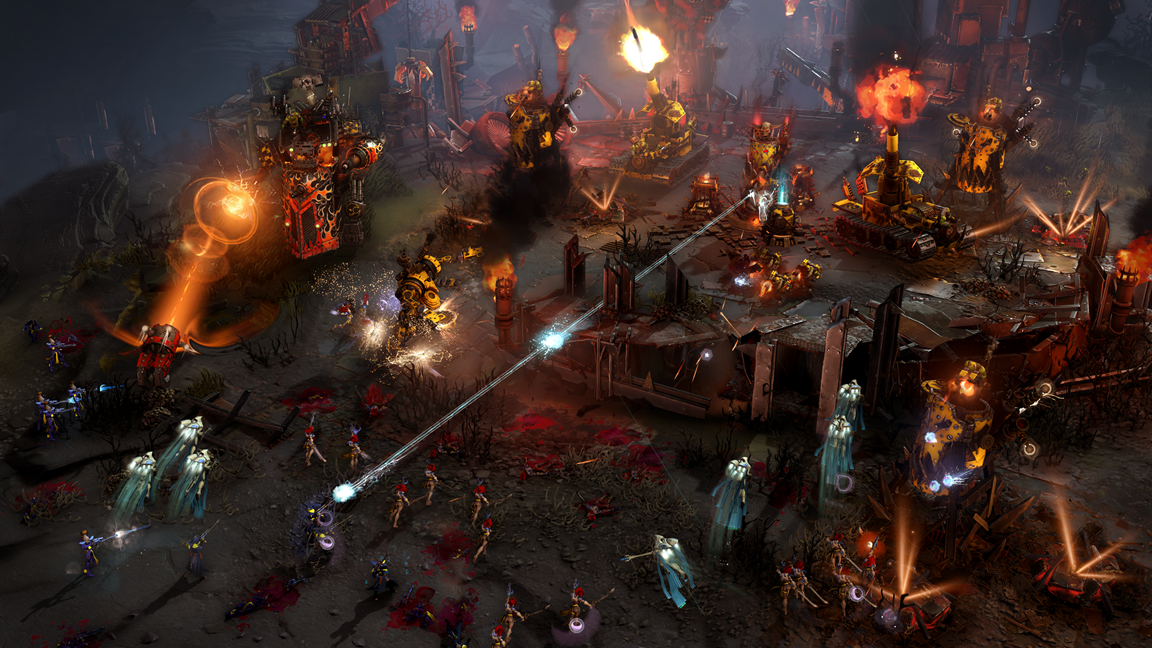 "Space Marines are not a generic, averagely weighted option in comparison to the other two. It’s unquestionable that they are simplest of the three to immediately put to effective use, though."

One of the most challenging hurdles a game designer can face is making sure their game works, and feels cohesive, across both multi and single player. Plenty of titles provide their players with different tools and mechanics between the two modes, but embracing a coherent structure that bridges them both is a task that requires a deft touch and an intimate understanding of how your audience is going to approach your game.

This structural bridge is something that Dawn of War III, arguably the most anticipated entry in the real-time strategy genre for years, is keen to get right. Balancing the skillsets, movement speeds and tactical patterns of groups of units and individual, super-powered Elites to work against an AI is one thing, but having it all work in matches of up to six human players is something very different.

"Game design is all about challenge, and making both multiplayer and single player work with the same factions is one of those challenges for us," game director Philippe Boulle tells me. "For definite we want the different modes to feel like you’re playing with the same tools, albeit in a different context.

"The Elite units have the same abilities, so do the armies, as you play through single and multiplayer. The availability of units and how you deploy them can change between modes, but the idea is that you always feel like there’s a consistency across the units in each mode. We approach that by designing the interactions first."

Big Kustom Morkanaut
by Dawn of War
on Sketchfab

Providing a consistency between the two means of play should help enormously when it comes to easing players, particularly series newcomers, into the realm of online competition. That Elite ability you learned in the campaign will also work against foes online, as do the concepts behind building bases and acquiring resources.

As such, the old cliché of ‘you should play the campaign before stepping foot online’ comes into play here. This would be unremarkable if it wasn’t for the fact that previous Dawn of War entries haven’t had such a strong crossover between online and off. In many ways, each of the earlier titles were two games in one; their single and multiplayer offerings were so different from one another.

Previous campaigns had largely shunned the usual RTS approach of base building and resource gathering for something more defined and action-orientated, with you instead controlling small numbers of units seeking to complete objectives. One of the biggest questions surrounding Dawn of War III, then, is whether the change to more closely align the two means of play is going to be welcomed by the series’ long-term audience. 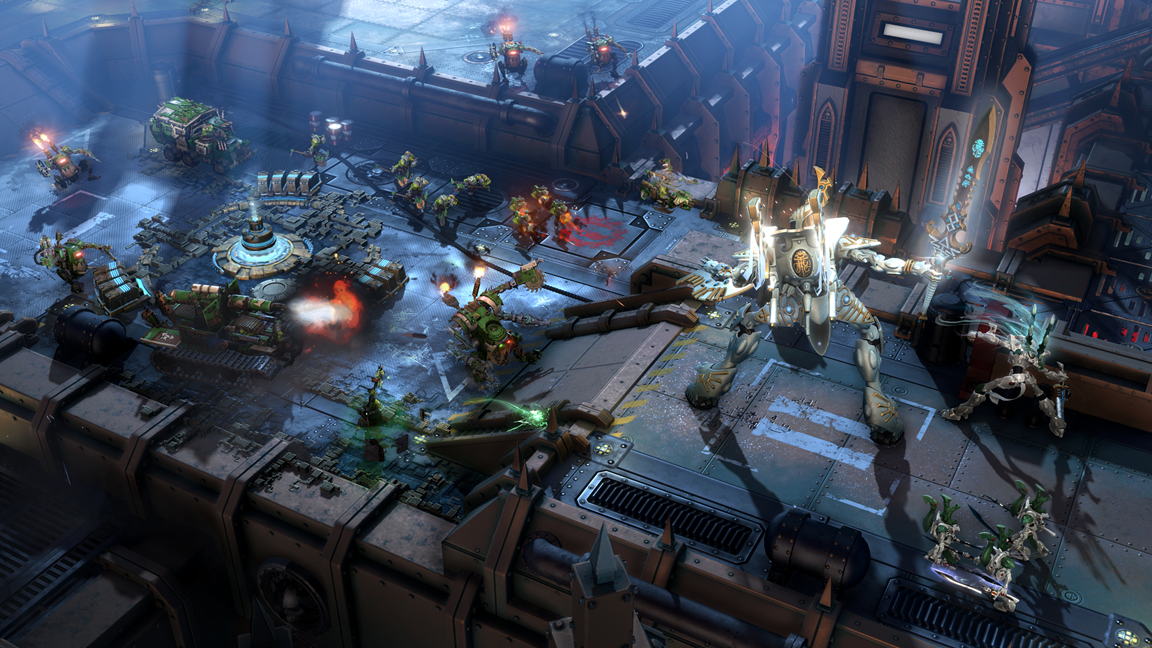 "We always look at lessons learned from the previous games and from the original Warhammer 40K source material. This time we did set out to create a new foundation, though," explains Boulle.

"We’ve got a responsibility to existing fans, for sure. There are people playing the first Dawn of War to this day and there is a really significant fan base that expect a lot from us. That is taken incredibly seriously and we want to deliver the best game we possibly can.

"All of the elements that we and the fan base love from previous games are being brought forward and we’re creating a modern mix from that."

Part of that modern mix is creating a balanced gameplay triangle between the three playable races: Space Marines, Orks and Eldar. Boulle describes the Orks as being the most variable given that they can be upgraded in a number of ways to focus either on deploying large numbers of units or a smaller number of bluntly powerful ones.

Eldar feature greater sophistication, able to hide themselves from the enemy, launch attacks that stun rather than kill those around and generally make a nuisance of themselves in ways other than firing bullets and swinging swords. I’ve played two matches as Eldar, a 1v1 and a 2v2 in which my ally was Space Marines, and I’m still not convinced I know how to approach them.

In this instance the confusion is positive, however, in that it’s easy to see the potential of Eldar traits. It’s just up to me to interpret how best to use them and in such a way that undermines the options open to the other factions. 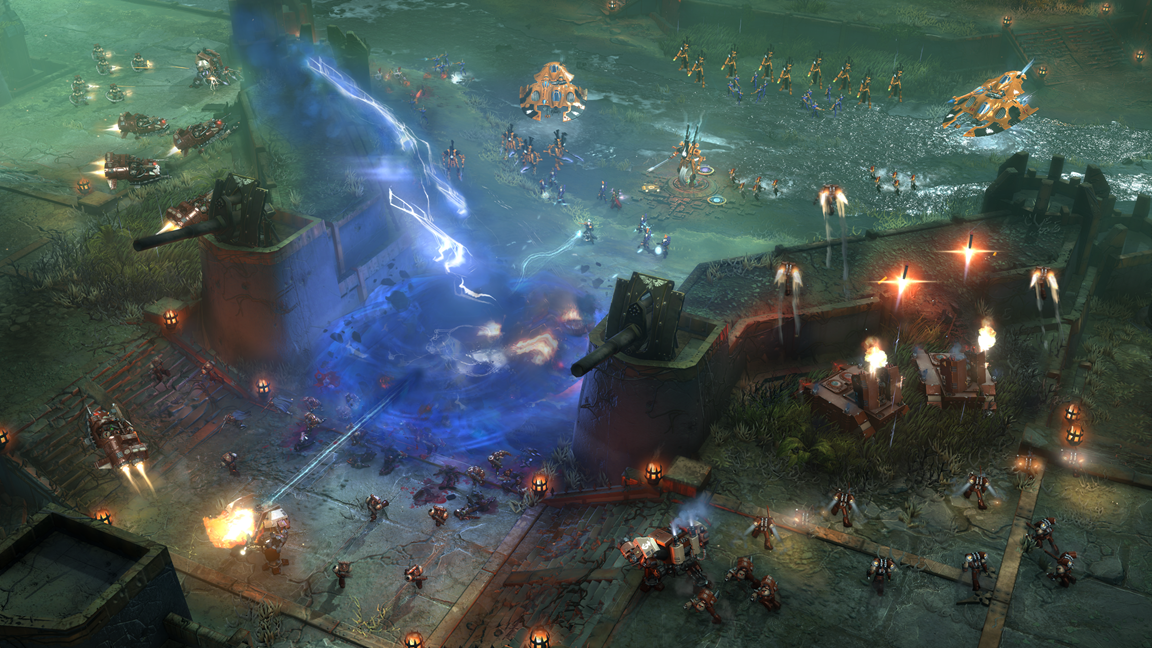 Boulle is keen to declare that the Space Marines are not a generic, averagely weighted option in comparison to the other two. It’s unquestionable that they are simplest of the three to immediately put to effective use, though. Their strong armour and the straightforward attack options of their initially available set of units make them a good option for newcomers worried about learning the rules of engagement.

"We always want new players. We can never take success for granted. We need to reach out to new players and welcome them, but it also means we can’t take the existing fans for granted" - game director Philippe Boulle

Space Marine options ramp up in complexity as matches grow longer, the option to deploy drop pods loaded with various kinds of units making them as much a force capable of surprise attacks as one focused on holding a strong frontline. This comes in particular handy when playing against human players as it’s possible to double bluff your opponent; them expecting you to use your drop pods at a given moment, only for you to wait and retreat, have them follow you and then drop in new troops behind them.

You can use the same tactic against the AI, of course, but tactical superiority is also greater when coupled with an angry or frustrated response from your victim.

Boulle believes that the balance achieved in Dawn of War III will work for both newcomers and veterans:

"We always want new players. We can never take success for granted. That cuts both ways, though. We need to reach out to new players and welcome them, but it also means we can’t take the existing fans for granted.

Dark Queen Solaria
by Dawn of War
on Sketchfab

"An existing fan isn’t simply a guaranteed sale to us. If we do things that mess up their favourite game then they’re not going to hesitate to let us know. I think we’ve created a balance that rewards people who have been with us for a long time in that there are returning characters that they know, there are interpretations of mechanics that they may remember and there are buildings and unit names that return from the original."

Achieving a working balance between single and multiplayer is hard enough, and that only gets harder when you add the desire to reach both old and new players to that.

Given the experience and pedigree of the team at Relic in charge of creating this latest Warhammer 40,000 outing, the audience expects the balance to be near perfect. That’s both the problem of success and the motivation that comes from achieving it: everything you do in future is going to be judged more harshly than it was in the past.

We want and expect Dawn of War III to impress.