If you’re not a fan of Dawn of War 3’s only multiplayer mode at launch, there’s nothing there for you beyond the campaign. 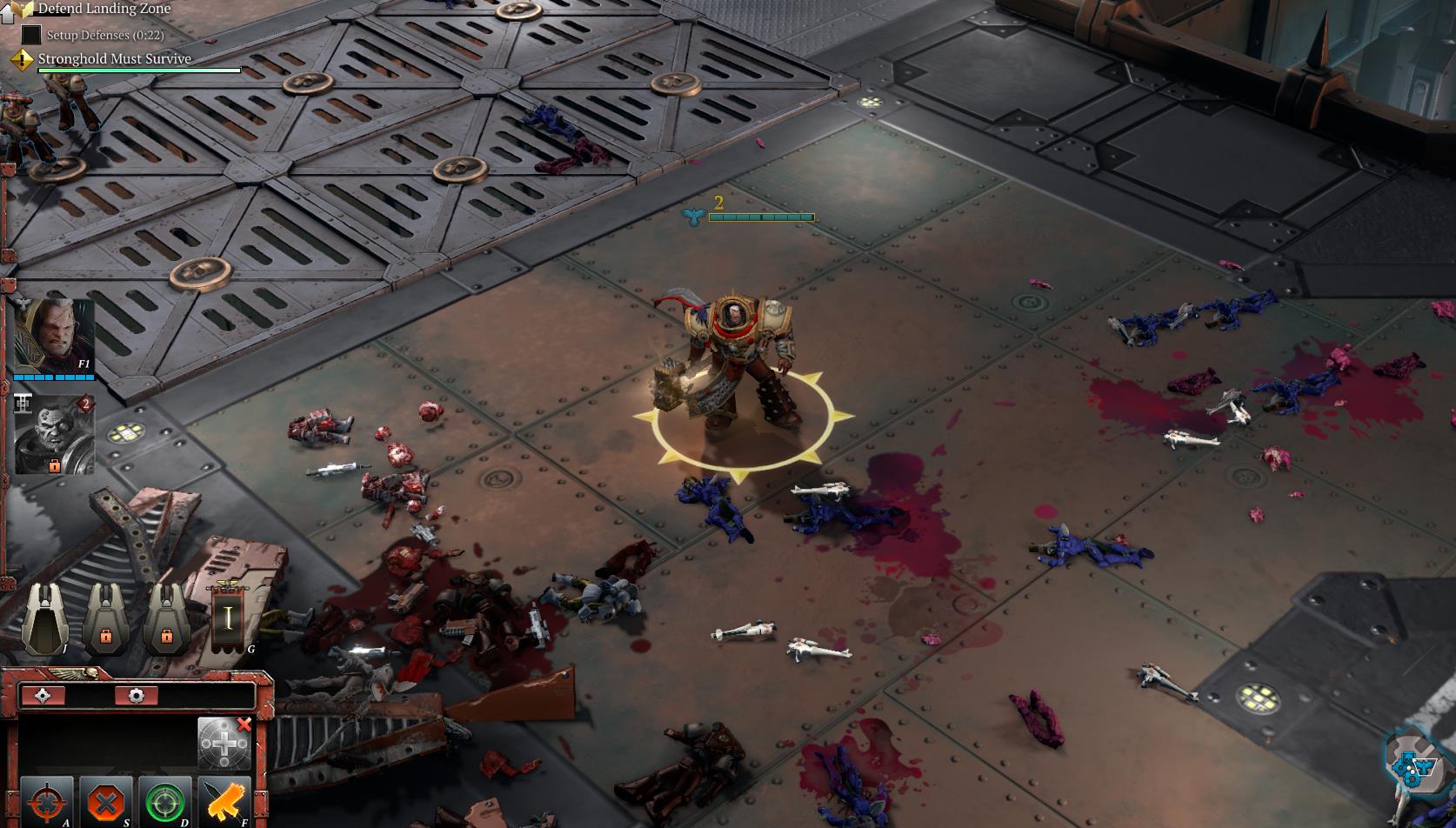 Dawn of War games, like many of their RTS contemporaries, have always attracted two types of players. There’s the group that shows up for the stories and lore, while the other, more skilled one, is drawn to the complexity of the multiplayer offering.

Up until the point Last Stand mode was introduced with Dawn of War 2, my time with anything beyond the campaign usually lasted for a few short hours.

Having now played Dawn of War 3’s only multiplayer mode, I can safely say it strikes a good balance between the economy-focused gameplay of the past, and the more action-oriented take of the previous game. The problem is, it’s still more demanding than my brain (trained to think in C&C terms) can handle.

The new mode features a MOBA-style setup of lanes, and shields that must be destroyed to expose turrets which in turn open up the core for attack when taken down. It’s the MOBA staples you know, except here you’re also worrying about economy, and building units to funnel them towards these objectives instead of directly towards your opponent’s base.

I don’t have any hot takes on this interesting new approach (you’ll have to read our review for that), but I can tell you that it plays just enough like a MOBA that I am automatically less likely to enjoy it. 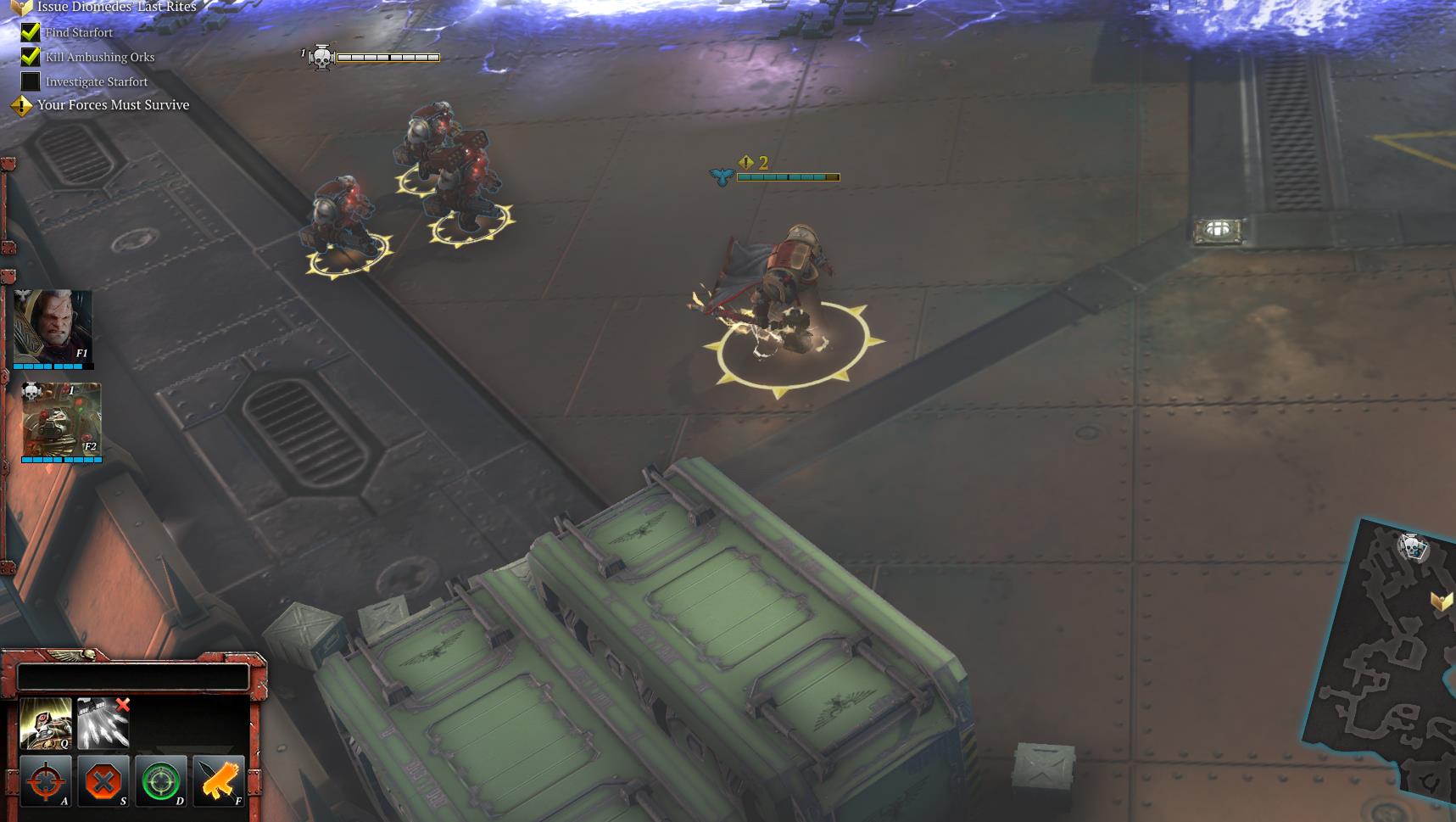 I have to give Relic props for at least trying something new, but the cynic in me sees this as a way of luring MOBA players into the genre, a tactic that’s never worked before for other games.

Nevertheless, the realisation that almost half of the game will go untouched was looming ever closer every time I dabbled into multiplayer between my campaign sessions. It was even more disappointing when you see how well-produced the game’s campaign was. It’s easily among the series’ best, with production values the likes of which has never been seen before in a Warhammer 40,000 game.

It’s astounding how, this many years later, Relic’s mix of original stories and lore references is still the best representation of this universe in any game. I’d say the third-person Space Marine comes close, but that would only assert Relic’s stature.

I was a bit worried Dawn of War 3 would suffer a drop in its production values when the studio released the first footage of in-game cut-scenes. It looked like the team had decided to build them around stop-motion footage of figurines, in place of the – likely much pricier - CG cut-scenes. 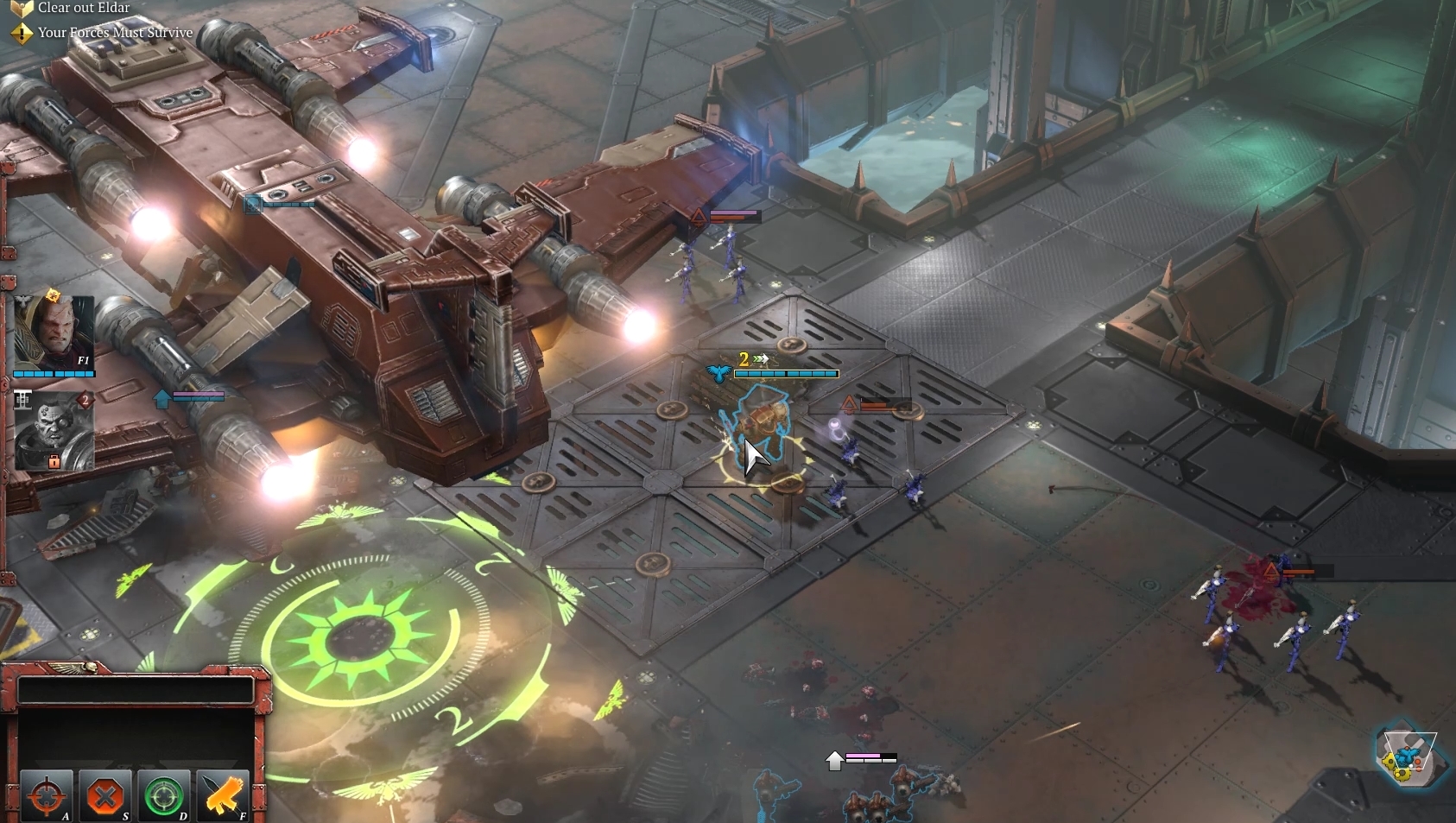 After finishing the campaign, I can tell you I was very wrong. These scenes were the highlight of my experience, they are so well-crafted, well-shot and composed that I am not sure I could say for sure if they in fact did cost less than CG would have.

Relic may have used figurines to create them, but they are no less full of life because of it. Thanks to dynamic backgrounds and the use of superb voice acting and music, I was fully engrossed in these stories.

I also feared this approach would result in a less emotional presentation, seeing as how it’s hard to do that with static sculptures, but all that dissipated the first time I saw Gabriel Angelos gritting his teeth as he proudly announced his ideologies. 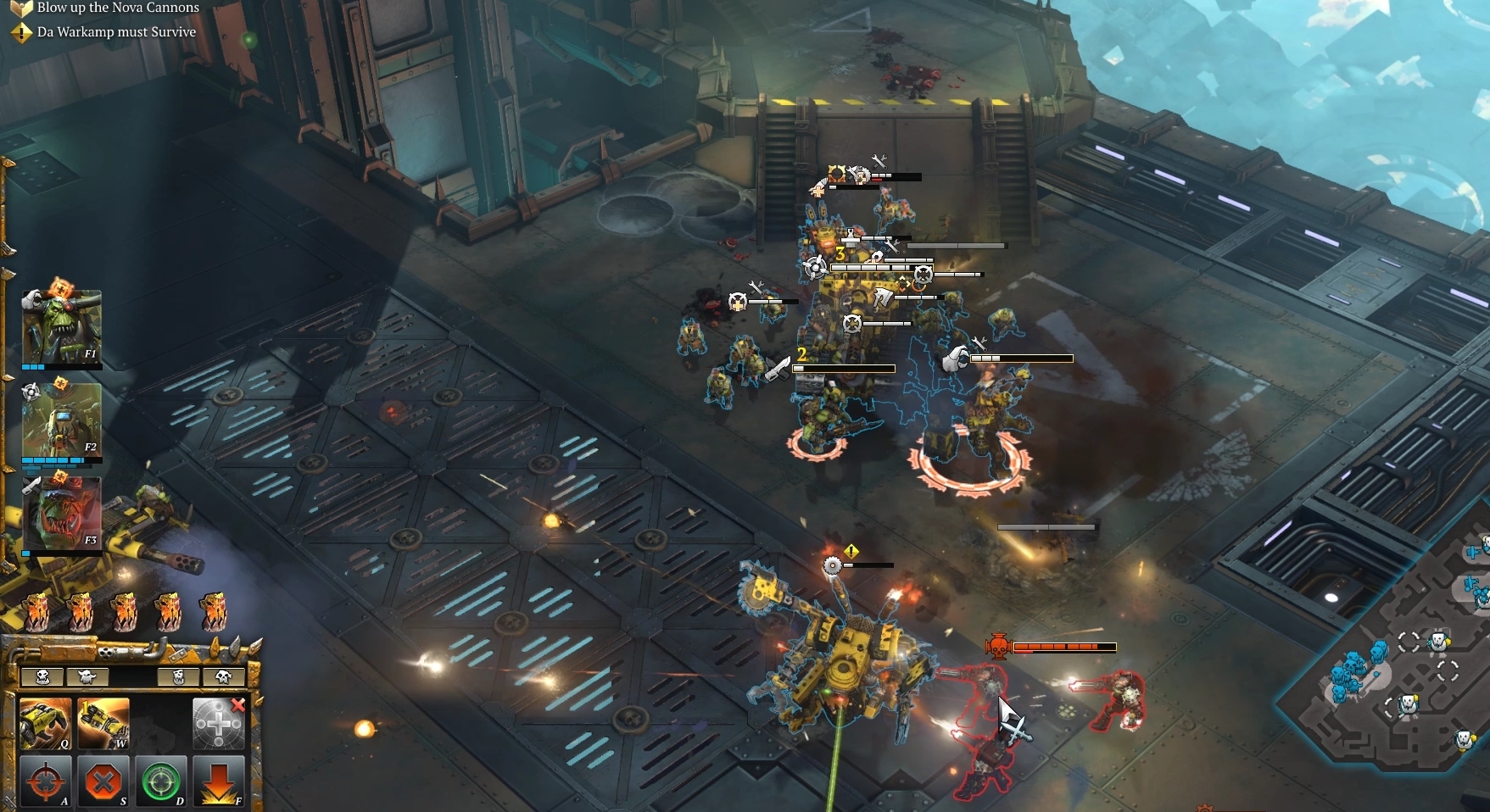 The identity of each of the three races, Eldar, Space Marines, and Orks, are well preserved and well represented. Space Marines are as diligent, stoic and disciplined as you know them, acting only in service of the Emperor and each other. Orks are the scrappy, furtive bunch that try to make the most of every situation, always failing to see the bigger picture. And Eldar, the technologically superior, well-reasoned race that relies on their beliefs and prophecy too often, almost to their detriment.

It’s incredibly satisfying to watch them meet in battle, all fighting over a coveted item, only to break off to deal with other internal matters. The voice talent, the music, presentation, even down to the audio filters and character portraits are well beyond any other game dealing with the subject of the grimdark future.

Given how many of the single-player missions give you control of one or a handful of heroes, I was expecting this type of gameplay would carry over to a Last Stand-style mode. Dawn of War 3 even makes a bigger deal out of these heroes, calling them Elites, than any of the previous games.

These characters are already equipped with enough skills and abilities to stand out and serve different tactical roles. All that’s needed to be done is expand on them a bit. 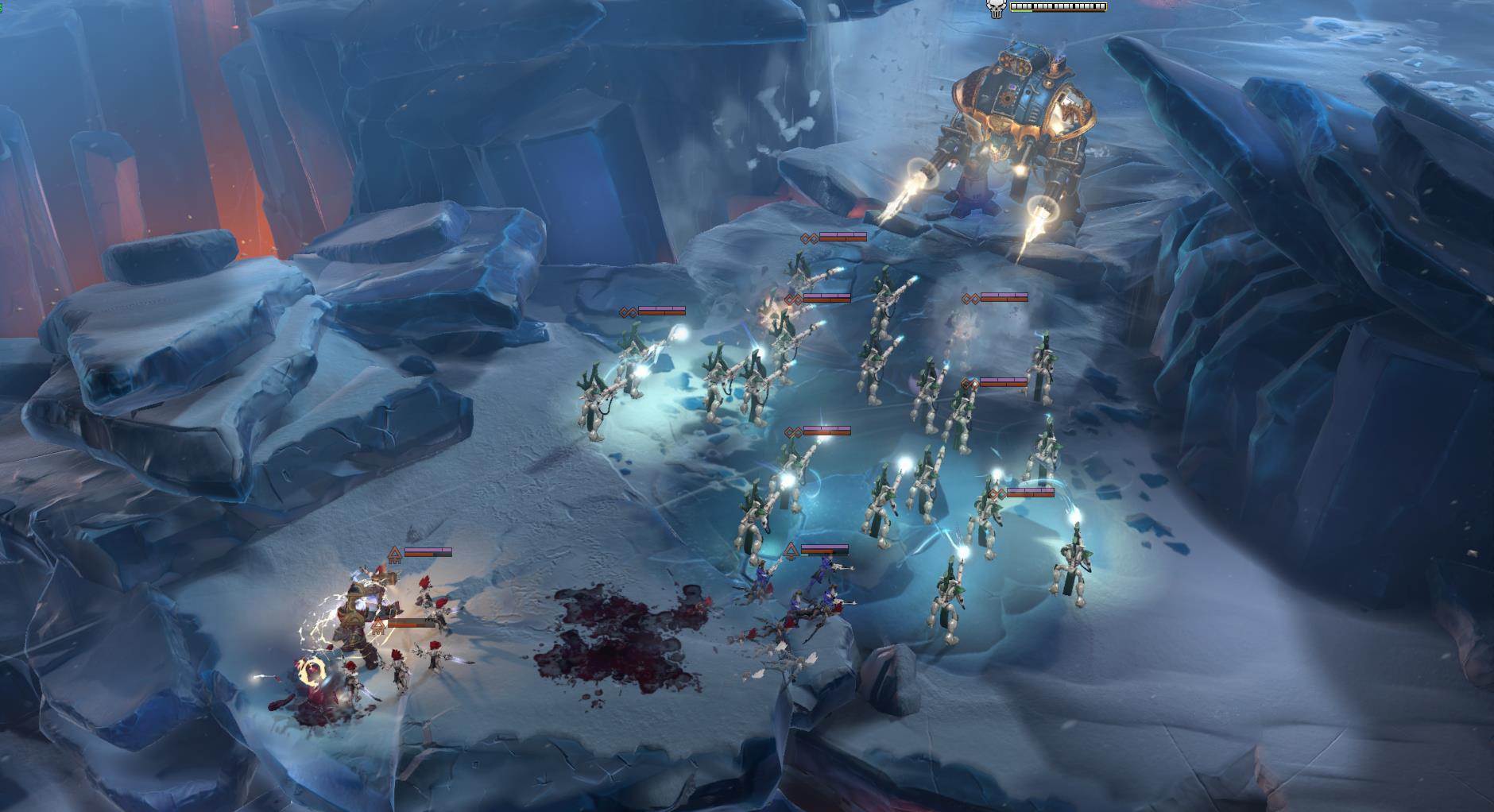 Last Stand, for the uninitiated, is a co-op mode where each player controls a hero in a battle against waves of increasing difficulty. The strategy comes from knowing what you can and cannot do, and keeping your abilities in sync with those of your allies in order to clear the board as quickly as possible.

To my surprise, Last Stand was nowhere to be seen. All I am left with at this point is the campaign mode, and little else to do beyond that. In this modern age where almost every game has a co-op mode of some kind, it’s a little perplexing to see Relic, who appear intent on shaking up the RTS formula with this new multiplayer mode, somehow miss an opportunity to make the game more appealing to the less multiplayer-centric crowd.

Blizzard, who has traditionally stuck to its guns with each new StarCraft 2 expansion, introduced the arcade mode and other co-op-focused activities that expanded the game beyond the campaign. Even Microsoft managed to offer a co-op mode with the lacklustre Halo Wars 2.

It’s disappointing to see Relic abandon Last Stand this time around, especially considering how popular and fresh it was at the time. Imagine a more evolved version of Last Stand that sits somewhere between the rigid MOBA conventions and the easy-to-get-into hero missions from the campaign.

Until something in this vein is introduced for those of us who just can’t get into multiplayer, I fear I won’t ever start Dawn of War 3 again until the first expansion is inevitably released.