Odyssey is the best Mario game in many, many years - and while it returns to the N64-style formula, its triumphs are firmly its own.

One of the early lines in Super Mario Odyssey's vocal theme song is "it's freedom like you never knew" - and while as a lyric for a game theme it's a little on the nose it's also completely accurate to Odyssey. This is by far and away the most free-form, open-ended Mario game yet - and it's all the more impressive for it.

Some things are just sort of a given in 3D Mario by now, but many of those things are still vital to Odyssey's success. Take movement, for instance. Mario controls as tightly as he has in all his 3D outings, following the same template that allowed Super Mario 64 to define third-person 3D character movement. That's instantly a pathway to a great game - but then Odyssey goes beyond in smart and sometimes surprising ways.

Mario still has a lot of the familiar moves from previous outings intact, but it's the ones that he gains in Odyssey that really help to tip the scales. The versatility of Mario's new pal Cappy adds a great deal of additional utility, and this is really where Odyssey comes into its own and becomes more than just another good by-the-numbers Mario title. 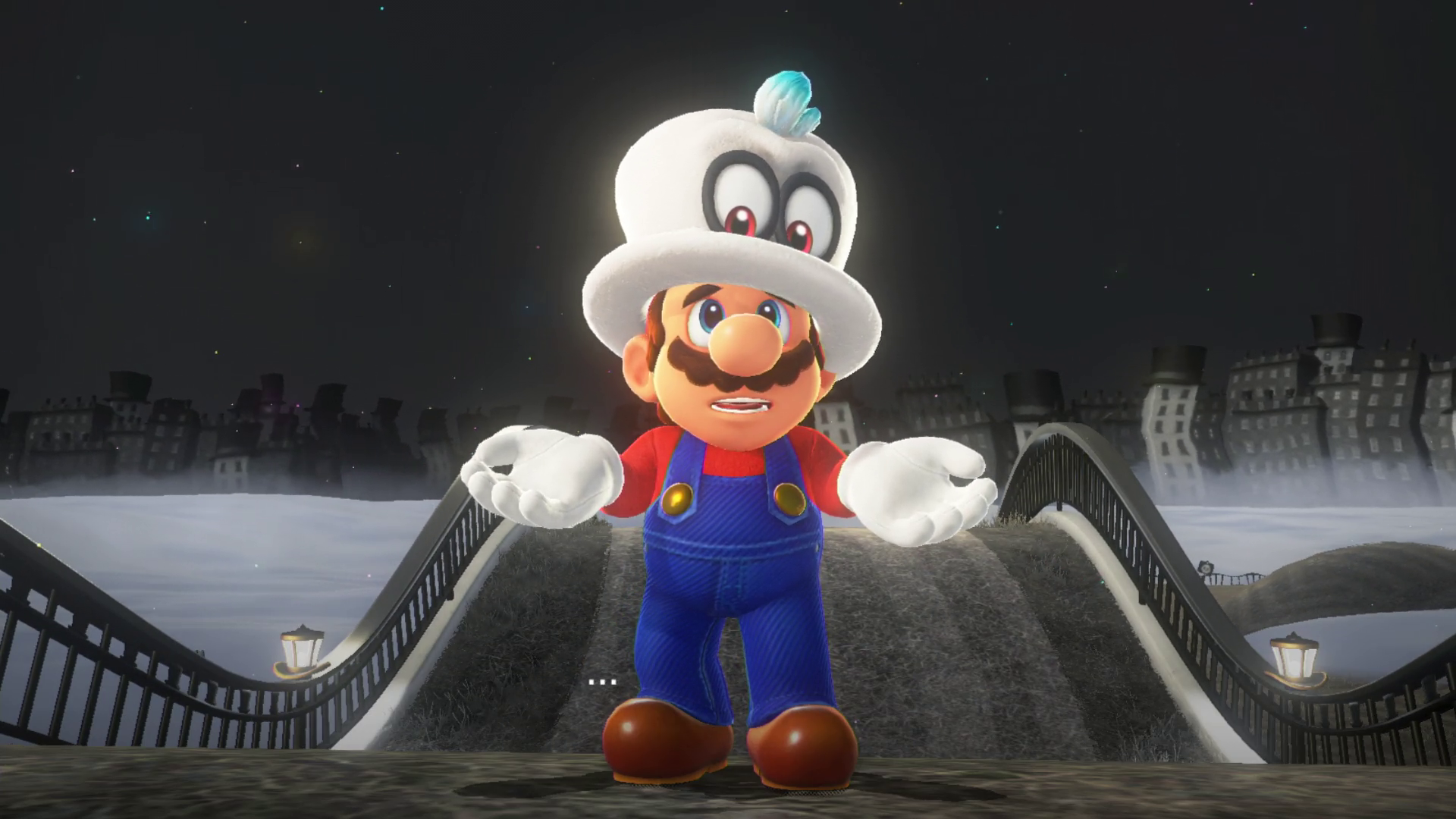 "The creature capturing is a genius idea - we're used to wild power-ups in Mario, but now any enemy and even the occasional friend is a potential power up."

Cappy, a sentient hat from a land populated entirely by sentient hats (because why not?) is a little bit of everything. Tossed out in front of you, he can be a platforming aid. Send him flying towards objects in the environment and he'll often interact with them, flipping switches or spinning them to make coins and other bonuses fly out. This stuff is fun and useful, and it's important to note that because these abilities can be easily forgotten in the face of Cappy's main skill.

That final impressive skill is how he interacts with enemies. Thrown at some he's a weapon, but when tossed at larger ones he initiates Odyssey's biggest new mechanic, the ability to possess enemies and make use of their powers. The game never calls this possession - probably a bit too exorcist for Nintendo - but that's really what it is.

The creature capturing is a genius idea - we're used to wild power-ups in Mario, but now any enemy and even the occasional friend is a potential power up. These power ups run the gamut - you can fly, platform in new ways, or gain more aggressive attacks than Mario would ever have alone. Some mechanics simply exist to enable little puzzles in the world.

This is a far more versatile gimmick than Super Mario Sunshine's FLUDD water jet backpack simply because the slate of enemies in any given level changes. Nintendo can thus build very different gimmick puzzles for each level, and this in turn keeps the game very fresh as it wears on. You'll still be encountering new powers and moves when your play time hits the double digits in Odyssey, and each power is smartly and naturally tutorialized as it's introduced. 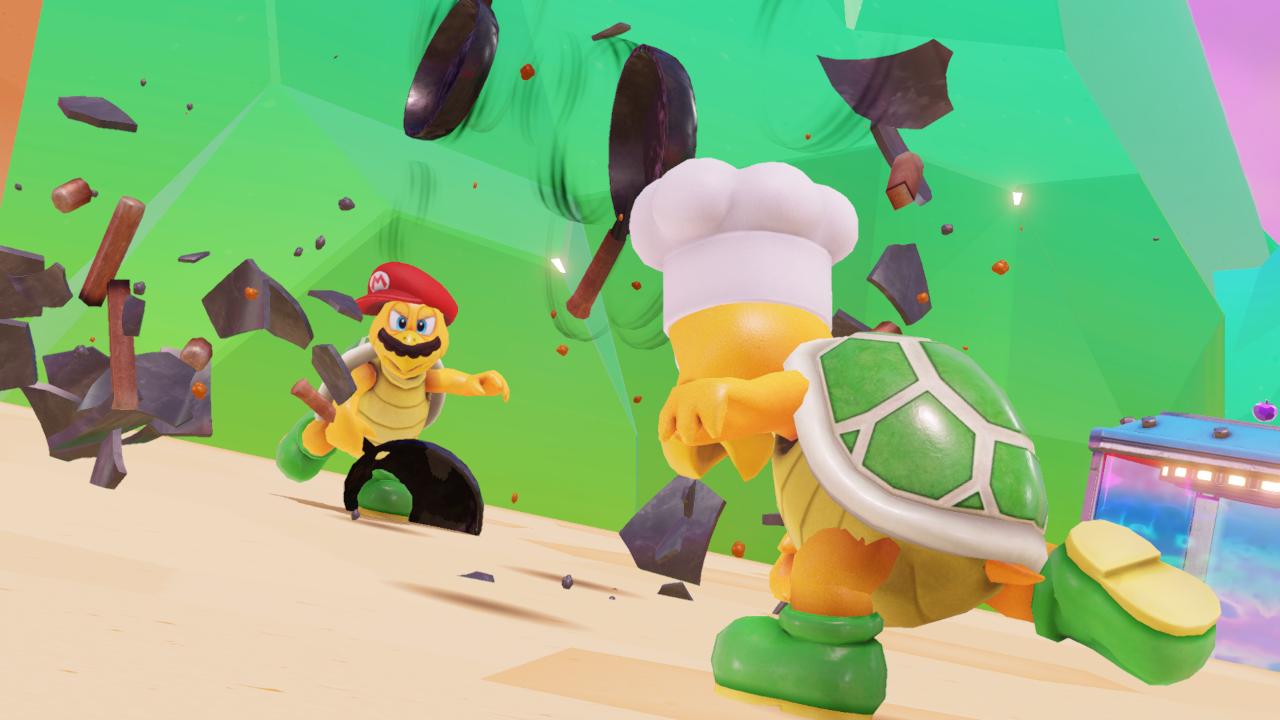 One water level gives you access to an Octopus character, for instance, and when possessed you find yourself able to shoot water in a Sunshine style. This is used to boost yourself around the level, tackle water-sensitive enemies and even clear away lava in a manner that feels very similar to Sunshine's paint.

This is one enemy in one level, and while there's some enemy crossover the point is that there's always something new to do with the possession mechanic in front of you, from one-off brain teasers through to skills vital for traversing a particular level. Another of my favourites are enemies with stretchy legs who let you essentially put your body on stilts to reach hidden platforms - a useful skill that's used brilliantly for exploration and even a memorable boss encounter. My absolute favourite is, well, a spoiler - so I won't say any more.

Needless to say that this mechanic works a treat, however. It feels like a very natural extension of Mario's typical repertoire, and the fact enemies are largely tied to levels ensures that each level has a unique feeling that's tied to the powers available to you in that area. The open nature of Odyssey's worlds, which we'll talk about in a moment, benefit greatly from the traversal, exploration-encouraging nature of many of these powers too.

"Super Mario Odyssey is the best of the 3D Super Mario titles and a Game of the Year contender in a properly stacked year."

The final string to Odyssey's bow in living up to those song lyrics is the structure of the game itself. While it doesn't have the open 'hub world' area of 64 or Sunshine, Mario Odyssey instead features a world map that leads you through a string of very open stages in a fairly linear fashion. You can head back to old stages for more exploration and there are a few times when you have A or B choices of which stage to tackle next, but you'll visit stages in a broadly set order, and there are more of these areas than I anticipated.

Inside stages things are a different matter. They run the gamut in size, but the key word here is dense - every one is packed with things to do, from regular, returning activities such as slots or tracking down Captain Toad to one-off activities that can earn you Power Moons. The moons are essentially this game's collectible, acting as the gateway to new worlds and further story progression.

Each stage sees you tasked with one major story-like mission to solve a problem within that world. The realistic city style New Donk City stage is under assault by Bowser, and so that stage's main quest line will ask you to clear out the bad guys, flick the power back on in the city and take part in a festival to celebrate peace being restored. You can then explore the liberated city more casually to track down optional collectibles. In most stages the more linear main quest path will net you more or less enough moons to progress the story, but you could equally ignore this and grab just as many moons through side activities. Unlike 64 and Sunshine moons are everywhere and are rewarded for practically anything creative or explorative, so you're not funneled hard towards this quest content.

This level structure is the secret hero of Odyssey, and while the game is packed with excellent design decisions the construction of the stages remains the glue that holds the whole enterprise together. This is why Odyssey manages to remain so fresh feeling and why it's such a triumph. 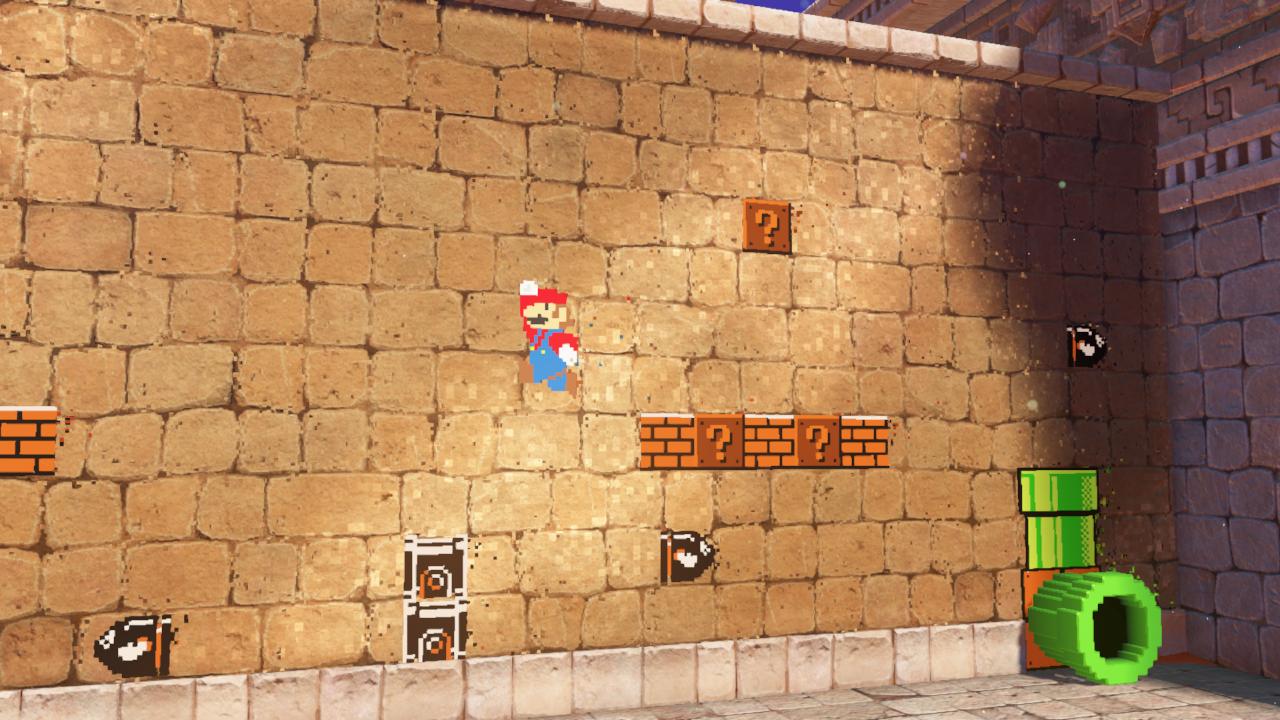 You're engaging in a constant flow of content and somehow Nintendo has managed to nail the balance of making none of it seem repetitive or dull. Some moons will take you thirty seconds to grab once you realize their location while other quests will require careful planning, battling enemies, difficult platforming or item fetching. Some quests require you to engage with the game's dress-up mechanic and put Mario in a specific outfit and so on and so forth - the game gently nudges you towards each of its mechanics, but there's also so much to do that you're not forced to engage with anything you don't want to.

"Super Mario Odyssey is the best of the 3D Super Mario titles and a Game of the Year contender in a properly stacked year."

Perhaps most impressive is that once Mario Odyssey is over it isn't really over. Instead it ramps up the fan service, deploying fan favourites for a finale that leads to the super-difficult levels for the hardcore fans. I was perfectly happy with the game before this segment opened up, but the surprises after the credits roll really are a great cherry on top of an already amazing package.

There are a few minor criticisms, like bosses being reused and some controls (such as tossing cappy in the air or in a circle) being limited to motion only, but for the most part this is a near-perfect package. It's not the mind-boggling reinvention that The Legend of Zelda: Breath of the Wild was, but nor does it need to be - the 3D Mario formula established on the N64 is arguably more enduring and less worn than the Zelda one established in Ocarina of Time. This is a brilliant expression and expansion of the ideas that have driven Mario since his transition to 3D.

The end result is a stunning game. Super Mario Odyssey is the best of the 3D Super Mario titles and a Game of the Year contender in a properly stacked year. It's difficult to believe one company has put out both this and the also all-time-great Breath of the Wild in one year, but here we are. It's Nintendo at its absolute best, and that makes it a must-play.