Razer boss Min-Liang Tan admits he does't run Razer "like a real company"; the PC and peripherals manufacturer ships every product at a loss, for example. Speaking to VG247, the CEO shows off his sense of humour and commitment to gaming, not profits. 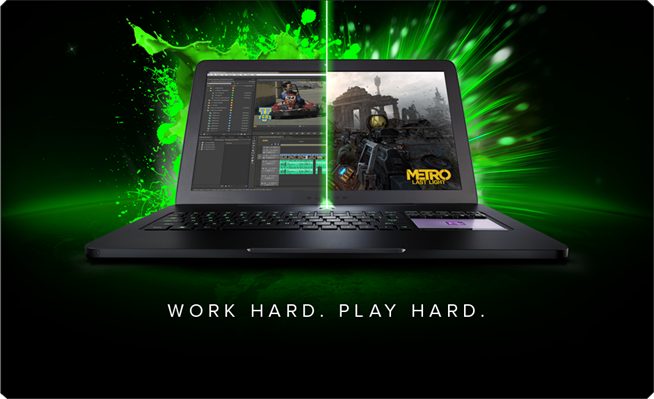 Innards on par with a good desktop's; the Intel Core i7-4702HQ Quad Core processor is standard voltage, not a watered-down mobile jobbie like the Ultrabook's.

Specs make it suitable for next-gen games; it can run Watch Dogs, for example.

Whenever I have to talk to a CEO I get quite nervous. I write about video games for a living, for heaven's sake. The press junkets I attend are considered swanky if the majority of attendees are wearing shoes. I can't talk to chief executives. What if I accidentally say a swear word? What if burp? What if the nerves go to my head and I dash a glass of water in their face before screaming and leaping out of a window? It gives me the willies.

Min-Liang Tan, though, is terrific fun. He doesn't look anywhere near old enough to be telling anybody what to do; he wears t-shirts; and he cracks jokes. During out chat, he even went off the record to call out a game he didn't enjoy, and had to be kept firmly under the eyeball of a PR minder in case he spillt forth all Valve's secrets in a gush of enthusiasm for a project that clearly excites him.

"One day we'll grow up and be a proper company," he said at one point, referring to Razer's tendency to put "awesome" before "profitable", but I kind of hope he's wrong.

Tan was in town to promote the Australian launch of its improbably sexy gaming laptop, the Razer Blade. Nobody is impressed by tiny, light laptops anymore, of course; but then again, nobody's ever made one like the Blade before. Razer is marketing it as the world's thinnest gaming laptop, but I feel like that's a mistake. As gamers, we hear "thin" and "light" and we think "rubbish". Razer should instead call it "world's fanciest gaming laptop, oh, and incidentally it is thinner than a five cent piece" (a fact Tan demonstrates for me with a coin from his own pocket) because its specs are eye-openingly ambitious.

I called the Blade improbably sexy, but when Razer began negotiations with PC manufacturers its ambitions were described as not just improbably but flat out impossible, eventually leading the peripherals manufacturer to bring the design process entirely in-house, even building robots to test its prototypes as it challenged some of the most difficult quandaries in tech engineering.

"We've always viewed ourselves as a gaming company - not like a peripherals company per se. About five years ago I was looking for a gaming laptop myself, and I realised I had two choices. I could either go for the super thin, super light, really nice laptops that have a super low voltage CPU, good enough for Angry Birds or something like that, or I could go for the big, thick and heavy gaming laptops," Tan said.

"We went and talked to the manufacturers and said can you build us something powerful and light at the same time? And they said no, it's impossible. So we kept knocking on doors. They kept telling us it was impossible. We said okay, what the hell. We're gonna bring in designers and engineers that can help us with this."

Razer lucked out, Tan said, because the tech engineering industry was going through a bit of a crunch, and PC manufacturers were outsourcing their design to cheaper markets in China and Taiwan, branding existing products. It created a "huge glut of all the top system engineers in the world", whom Razer promptly hired.

"This is something that is half the thickness, half the weight of anything comparable out there. To be even able to get it 10% thiner is a feat by itself. But we have here is probably two or three generations ahead, because we decided to really push through with design," Tan said.

It's clear that Tan is proud of the device, and as he runs through its features with me it's also obvious that an immense amount of thought has gone into it. From the one-third sized power supply brick to the way the lid opens at a feather touch and shuts with a satisfying little snap, it's a spectacularly attractive bit of tech that inspires massive geek lust in me and belies its powerful guts. It has as much or more smex as Apple products - and a price tag to match - but it's also a suitable stand-in for the hulking great desktop thrumming away in my gaming den at home.

Making a device this delicious is something only Razer could do, because only Razer is willing to go through the incredible amount of prototyping and attendant R&D cost required to produce one product this ambitious.

"It's one of those things, a Razer design initiative. We take a million years to get anything out. If you put things in perspective, most other companies probably launch more products in a single year than we have done in the past - since we were founded.

"It's like a running joke. We launch on the average maybe five, or four new products a year? And our customer base complains that we launch the products too fast. I'm trying to figure out why. Most other companies launch about 50 new products a year, or even 100. We launch very few products - but products that everybody wants. if there are 50, you might only want one of them, or three of them, but because we're just so lazer-focused on gamers themselves, every single thing becomes a gamer's requirement."

Tan paused. "Unless you're a left-handed mouse."

There's a reason why companies don't produce left-handed mice (Tan assures me the plural is indeed mice), and it's because they make no money. They make even less money when they're designed for such a specific purpose as gaming. Razer made one anyway, because fans asked for it. I asked how it was performing.

"Terribly," Tan said candidly, before breaking into laughter. "Commercially, it's one of the worst decision we've ever made. But it's one of those things where it's just funny; we do it. Every product we do that we lose money on is still funny for us.

"We're not run like a real company, I know. It's insane, but every single product we ship, we're shipping at a loss. But, eh! Life is short. And it's funny to see someone using a left-handed mouse.

"I have great investors. They're passionate about what they do. I tend to be able to deflect any questions like 'how are we doing on a business level? How profitable are we?' by going 'Look at this! Isn't it cool?' And they go 'Oh yes, it's cool,' and then I agree. Yet another board meeting saved.

"Our investors are genuine product people. I'm thankful for it. I cannot imagine if somebody's just interested in like, a bottom line or a profit. We've been able to make decisions that make absolutely no commercial sense whatsoever. Even the laptop flies in the face of industry reports. You know, 'PCs are dying, everyone should get out of the PC industry' and here we are going 'Great! Let's invest as much money as we can in building a PC laptop.' Right? Doesn't make any sense but hey! Look at it! It's cool."

As noted in the comments below, "shipped at a loss" does not mean unprofitable. Following publication, Razer reached out to reiterate that it doesn't design products with profits in mind - but it's certainly not making a loss on every product.