You’d be forgiven for not having heard of Poop Slinger, but this little known indie title has a unique and distinct honor.

Released for the PlayStation 4 and Steam in August 2018 by little known developer ‘Diggidy.net’, the ‘casual poop launcher game’ didn’t manage to cause much of a stink (pun intended). In fact, at time of writing, it lacks any user reviews at all on Steam. It is, all things considered, a fairly unremarkable game.

Despite this, Poop Slinger has become remarkable in at least one unexpected and interesting way: it has recently become the rarest physical PlayStation 4 release ever, with just 84 copies reported to be out in the wild. Amazingly, the story behind its release – which apparently bankrupted physical publisher Limited Rare Games – is even more remarkable. 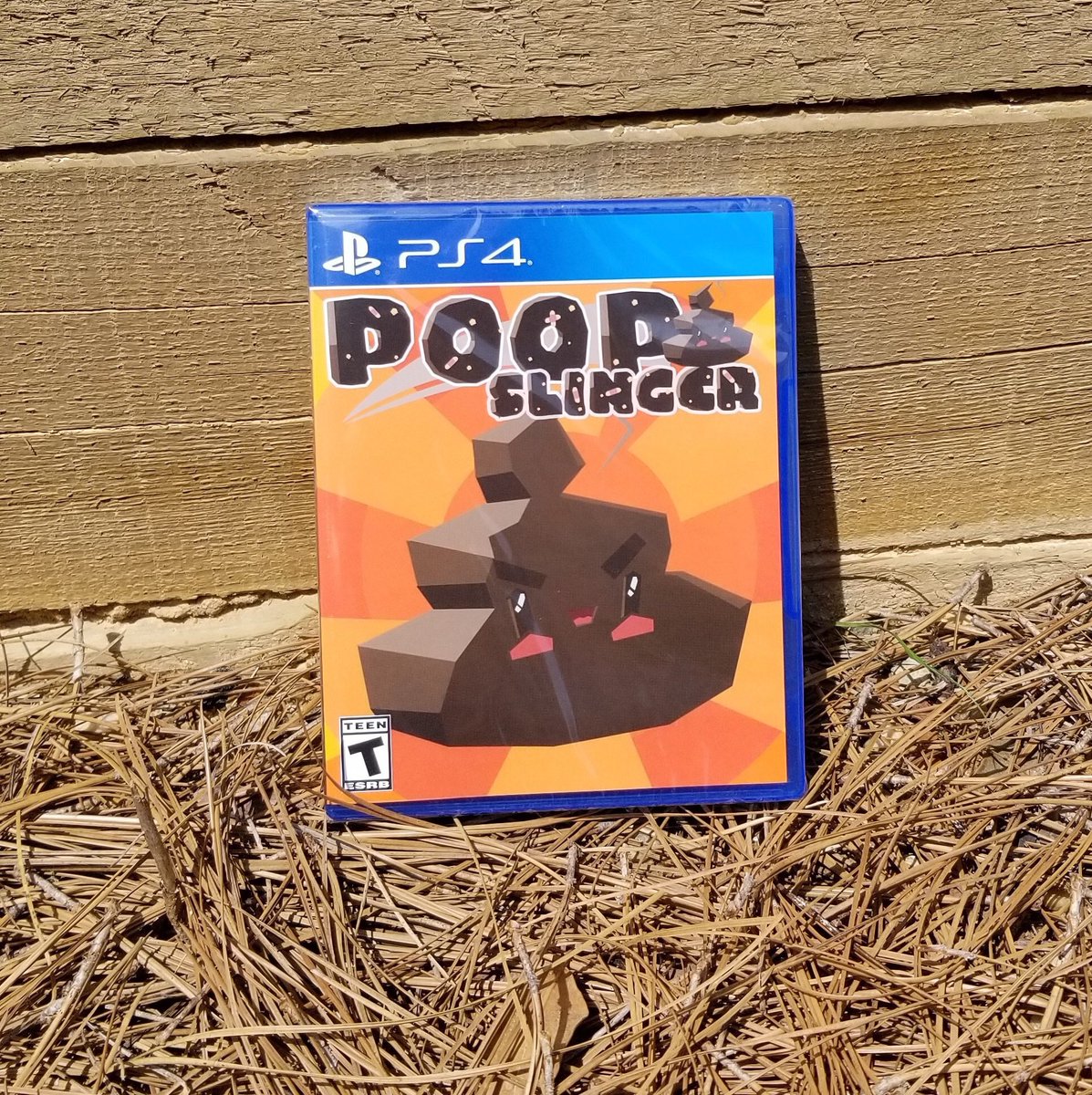 Limited Rare Games, a supposedly South Carolina-based company run by a single Russian individual, claims to have taken out a loan from their bank to fund the release. As Sony’s policy dictates a minimum quantity order of 1,000 copies, we know that at least this many were manufactured.

Limited run collectors, who snap up the bulk of these sorts of purchases, were instantly suspicious. The website to purchase copies from was laughably barebones, with little more than a picture of Poop Slinger’s game case, a buy now button, and a copyright signature – half of which was written in Russian. All of this was displayed on a plain white site, alongside a note that only 820 copies were available worldwide. (Despite the minimum order number from Sony being 1,000 units, it’s common for limited run companies to reserve a number of copies for replacements, giveaways, and special events.)

Throughout the day, it became apparent that very few sales were being made. Limited Rare Games increased the price to $50, tweeting “we are not selling enough and are scared we may go out of business”, and later “if we do not sell out all copies in two hours we will have to close down. Too many people think we are a joke or scam and the game is not selling.”

According to the company, it needed the sales to repay their bank loan, which was nowhere close to being settled. As limited run publishers often sell their games for one day only, it’s unclear whether this business model was something arranged as part of the deal with the bank beforehand, but for whatever reason, all 820 copies of the game had to be sold on April 1st.

At the end of the day, Limited Rare Games declared that it had only managed to shift 84 units, and that it'd have to shut the business. The company promised to ship out the sold copies, but remarked that creditors were to take the remaining unsold copies to repay the loan, and that sales of the game couldn't continue. The business had, after just one day, gone bankrupt. All signs pointed to this being either a joke or a scam.

But it wasn't. Developer Diggity.net weighed in with an official statement confirming the physical copies were "indeed legit", and that orders would be fulfilled. Then just a few short weeks later, buyers started to report that Poop Slinger had plopped into their mailbox - now holding the dubious honour of the rarest physical PS4 game in existence.

In addition to all of the peculiarities is the company’s name itself. If Limited Rare Games sounds familiar to you, that’s because it’s stunningly close to the successful Limited Run Games, who regularly release limited print run titles for the PS4, Vita, and Nintendo Switch. 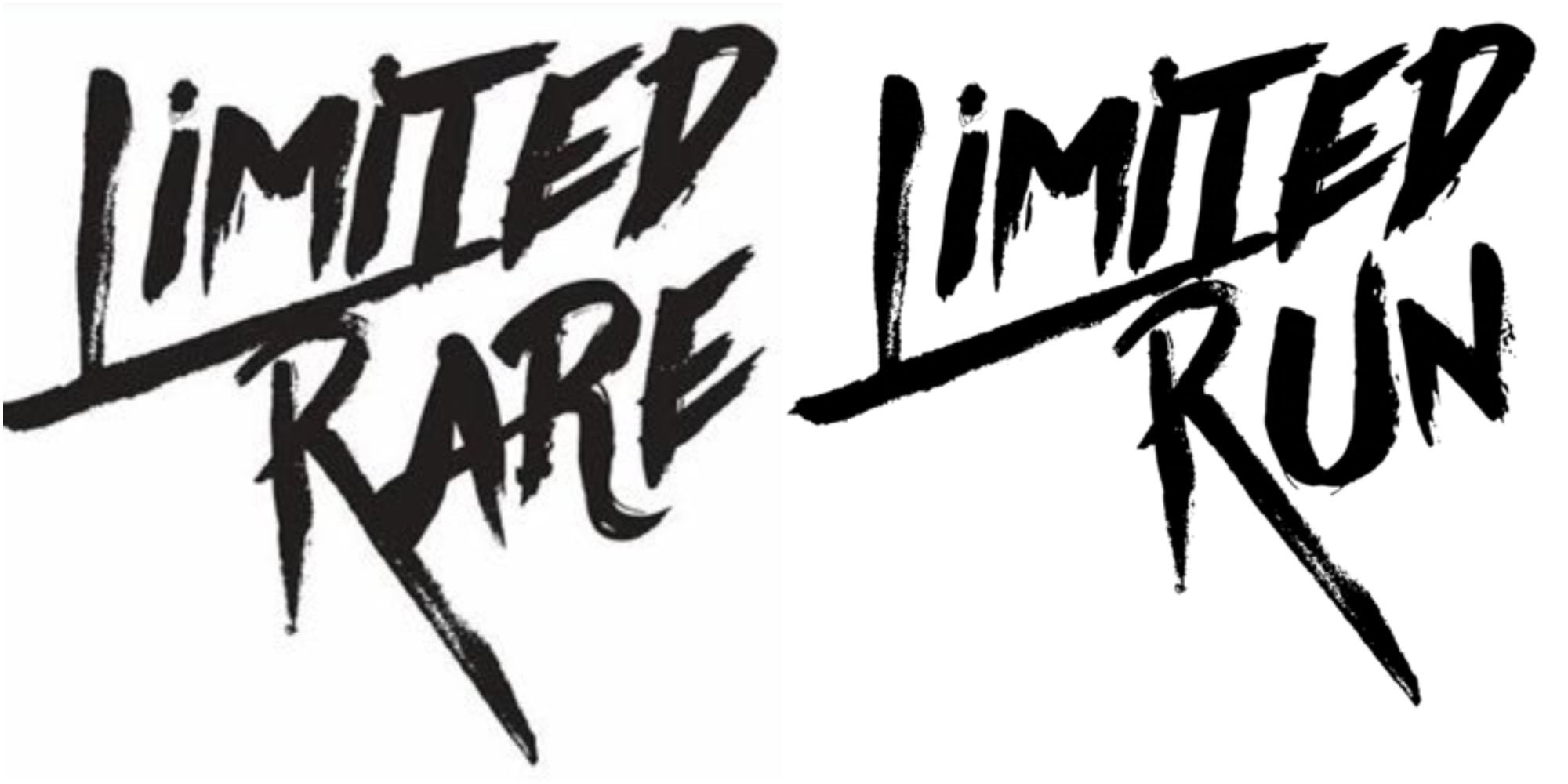 The similarities don’t end there. When Limited Rare started selling the game, the logo in their Twitter profile photo used the same font as Limited Run’s, replacing the ‘Run’ with ‘Rare’. Limited Run Games says that it was made aware of this, and asked for the logo to be changed. Later in the day, the logo then changed to be similar to that of another competitor, Super Rare Games, and then Strictly Limited Games, before finally changing to an image of the Poop Slinger’s game case instead.

Speaking with Limited Rare Games on why the company Twitter account and website used these logos, a representative responded (in Russian), “we thought the logo would help people immediately understand what we were doing. We did not understand that it would be wrong. Other publishers have adopted the Limited Run Games logo. I don’t understand why people thought we were a joke!”

Over the next two weeks, Limited Rare Games was bombarded with accusations of being a scam, with the few who did purchase copies questioning when they would show up.

Much to everybody’s surprise, copies did start arriving from April 18th. Several customers confirmed to me that their copies arrived in working condition, and that they only trusted the website initially at all as they could purchase through the security of PayPal. One of those customers is Twitter user @MaddasaHater, who kindly sent images of her copy. Interestingly, the Limited Run-style logo still remains on the back of its case. The back also has a line reading ‘LRG02Cover’ – implying this was perhaps originally intended as their second release.

MaddasaHater was so curious about the origins of this game that she reverse-searched the postal address noted on her parcel, which directed to a Goodwill store in South Carolina. She also says that an eBay listing of Poop Slinger for $600 uses the images she uploaded to her own Twitter account. 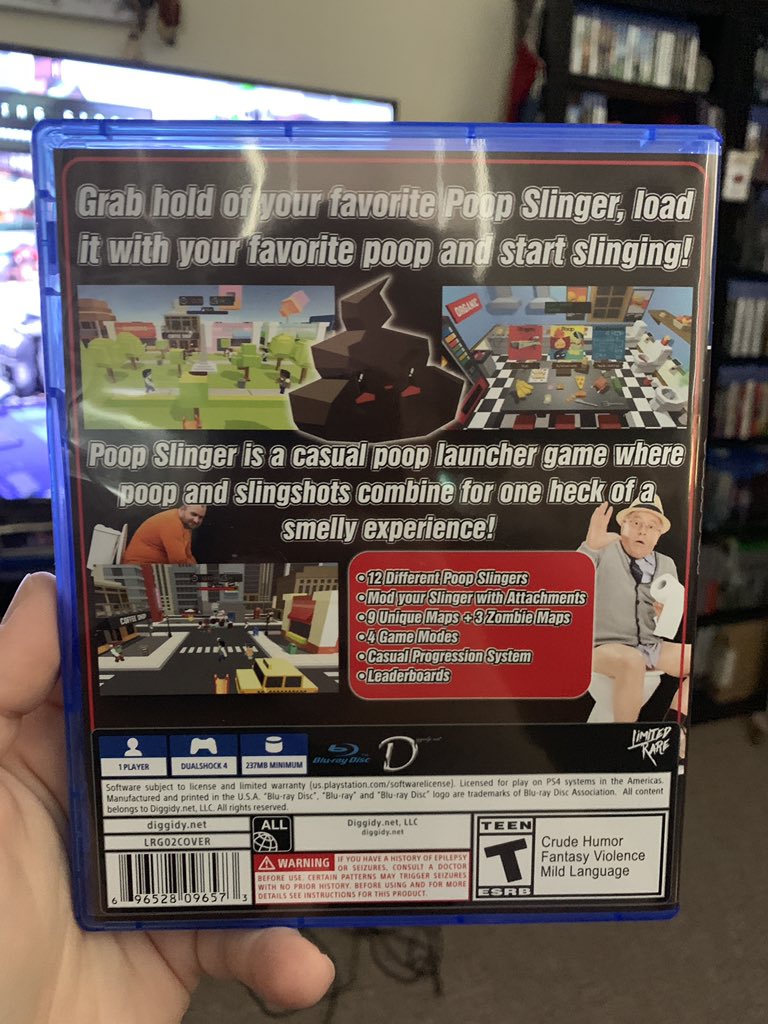 Now that copies of the game are confirmed to have arrived, the common theory among limited run collectors is that Limited Rare Games is an elaborate joke, run by one of the bigger, more established limited print run companies. After all, Poop Slinger is a peculiar title, it was available exclusively on April Fools’ Day, and the company’s name is comically similar to preexisting competitors.

I asked Limited Run Games if it'd had any involvement. “We’re aware of them to the extent that we sent a message asking the logo to be changed. They obliged and that was the end of our interactions. They are a different company than us. We are aware of the confusion and hope that people stop associating it with us.”

Super Rare Games and Strictly Limited Games had similar responses when asked. So just what is going on? If it is a joke, Poop Slinger’s developer doesn’t appear to be in on it.

“There was a contract, QA with Sony, and payment. What happened after that, I do not know”, Diggidy.net told me. “They have fulfilled their contractual obligation in terms of money and shipment of the product. With that said, there was very little communication with them, even throughout the whole process, and as a result of that, I do not know what has happened to the company and if they still exist.”

Diggidy says that as far as they recalled Limited Rare Games had specifically mentioned that the company's intent was to release the game on April Fools’ Day in their first correspondence, but they’re as bewildered by the situation as everyone else. “Why would somebody go through this tedious process and then not sell the game?”

I asked Limited Rare why April Fools' Day was chosen as Poop Slinger's release date. “I come from Russia, but moved to South Carolina to be with a distant relative. In Russia, April Fools’ holidays are not celebrated either in the office or at school. I did not know that enterprises were playing practical jokes.”

At time of writing, the truth behind the situation is still unclear. Limited Rare Games’ Twitter account and website were both wiped shortly after I spoke with them, while privately the owners of the account spent hours insisting that this was very real and caused them serious financial burden, while also expressing frustration with the constant tweets accusing them of being a scam or a joke.

If it is some intricate marketing ploy, it’s an ill-advised one, as some collectors are now distraught at the idea that they’ve missed out on a legitimately rare physical release from a site that so clearly appeared to be a scam. The price-hiking and poor communication would also be an odd decision from a company hoping to benefit from this fiasco long-term. After all, it’s not a very funny joke to make your audience feel shafted, and the developer you’re working with to be left in the dark.

For now, all we know is that Poop Slinger is real, and that with 84 copies sold to the public, it’s currently the rarest PlayStation 4 game in existence. Who knows – maybe we’ll see those copies the creditors took pop up somewhere one day soon!