Horizon Zero Dawn tips and tricks for those ready to tackle the fierce machines of the Sacred Lands and beyond.

Horizon Zero Dawn can be pretty tough and unforgiving if you're not caught up on its many interlocking systems. Whether you're just startng out or checking back in now that The Frozen Wilds is out, do yourself a favour and cast your eye over this collection of tips.

This page is part of our Horizon Zero Dawn guide, where you'll find plenty of more detailed, in-depth resources for those of you who have conquered the basics covered here. Track down the best weapons and best outfit, tackle the tough Frozen Wilds content... whatever takes your fancy, really. 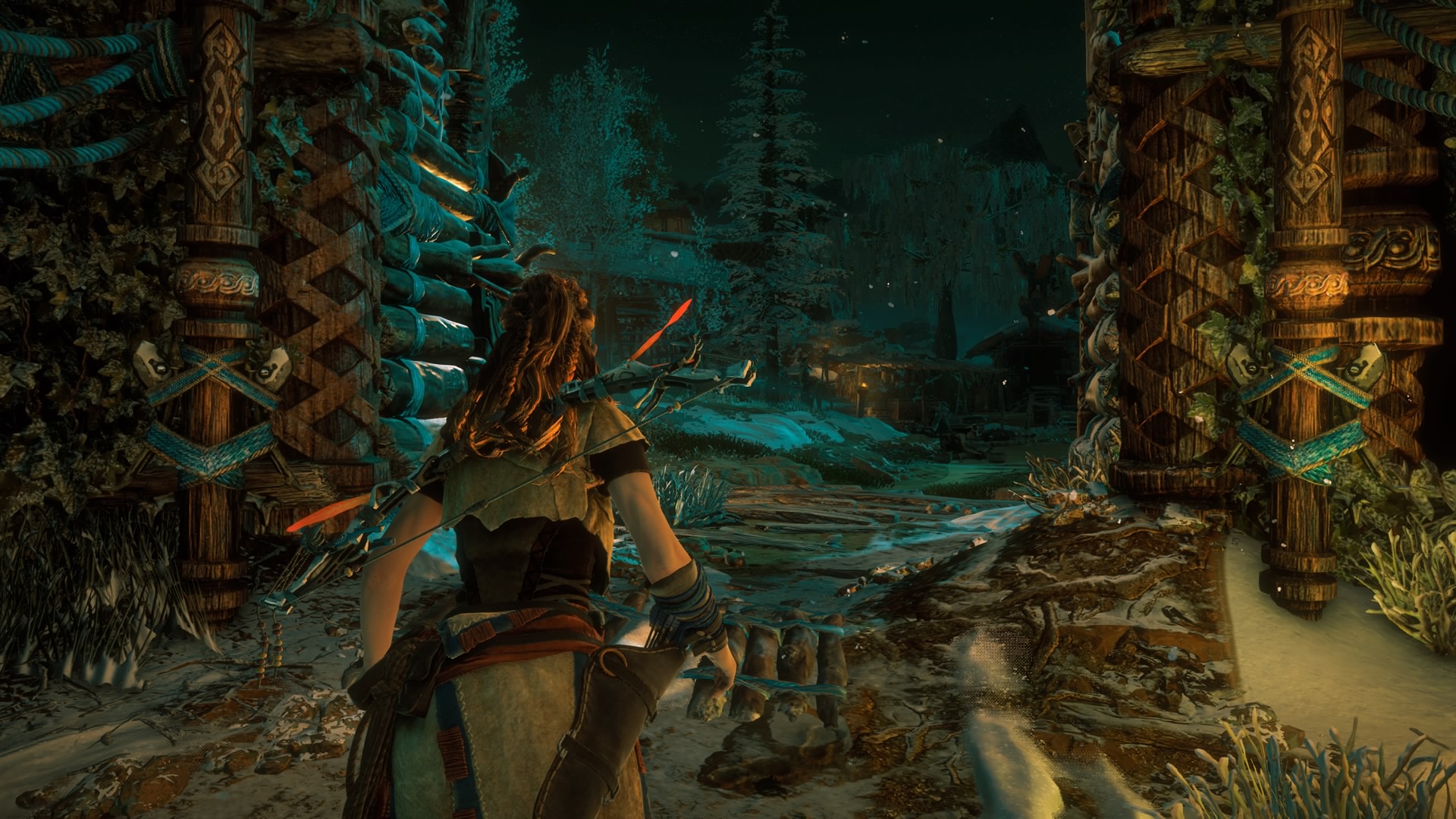 Horizon Zero Dawn is really generous with experience as quest rewards, so if you make even a token effort towards knocking off a few side quests you’ll never need to grind as you progress along the critical path.

Although loot rewards are minimal, even the simplest side quests in Horizon Zero Dawn hand out a fat stack of XP for your trouble. Many will even award you a bonus skill point, making them extra profitable; you'll have every skill well before you run out of quests.

Check your quest menu to see if there’s anything you can knock off in your immediate area – each quest is marked with a distance indicator. Pick up new side quests and errands by looking for green exclamation marks on the map and HUD. You’ll usually find at least a couple in each non-bandit settlement, marked on the map with three little house symbols.

Don’t forget about weapon tutorials, either. These unlock every time you buy a new weapon, and some of them can be completed in under five minutes for very, very easy XP. 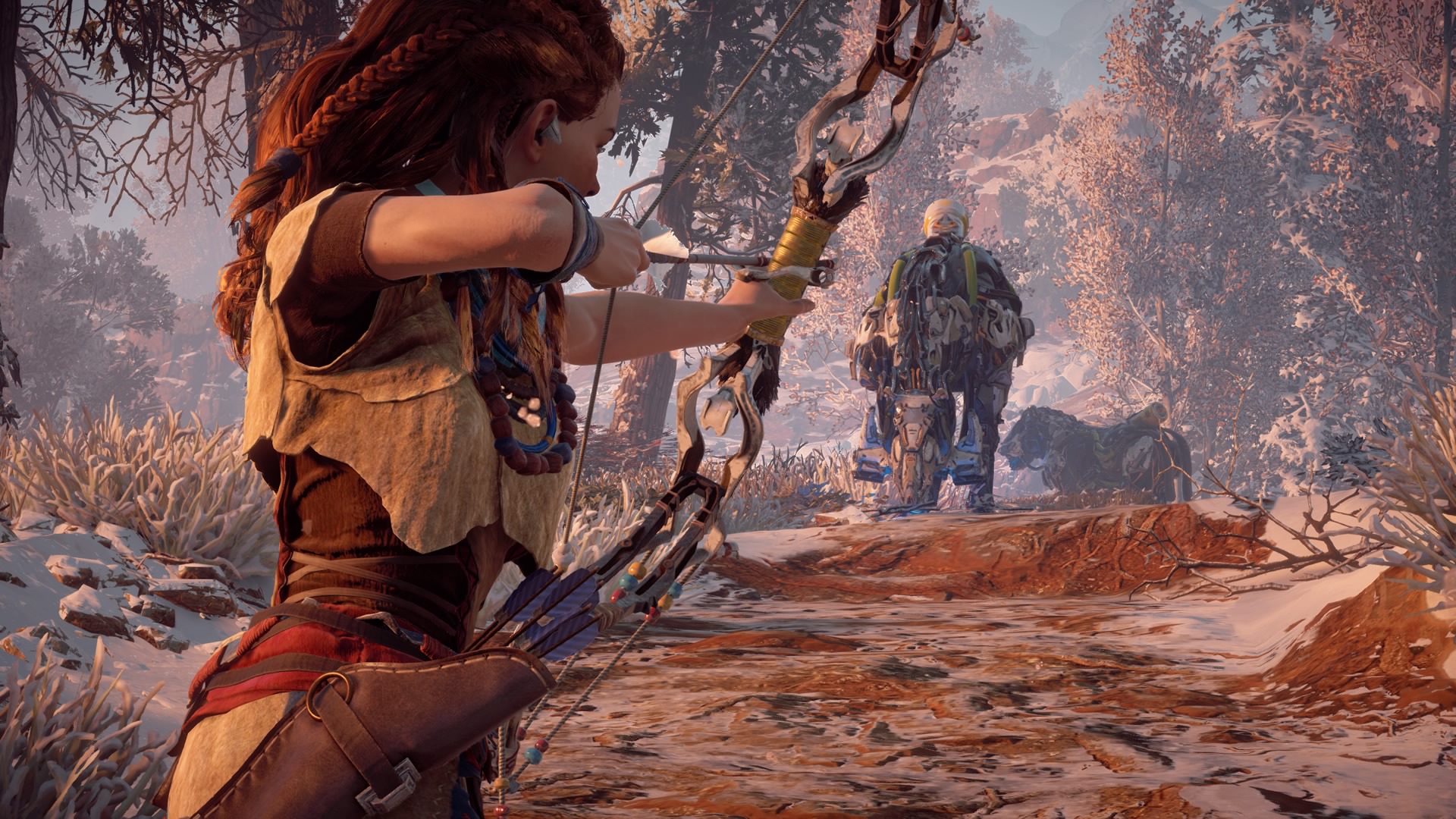 Use concentration for precise shooting

Concentration is an essential skill. Activate it with R3 (right thumbstick) while aiming a bow (L2), and time will slow, giving you a much better chance of hitting small, moving targets.

This is especially vital when you start meeting really dangerous armoured machines with tiny weak spots, as it can be very, very hard to hit those tiny heat vents and canisters otherwise.

Concentration can be upgraded with two support skills, concentration+ and fast reload. These increase the duration of the skill and speed up weapon use while it is active, respectively. Both make excellent additions.

The hunter reflexes skill is another fine addition for those who enjoy using concentration, as it provides a similar effect whenever you aim a bow weapon while jumping or sliding. Essentially this means you never need to wait for concentration to recharge - just hop or slide and you've back in action, even while in cooldown. 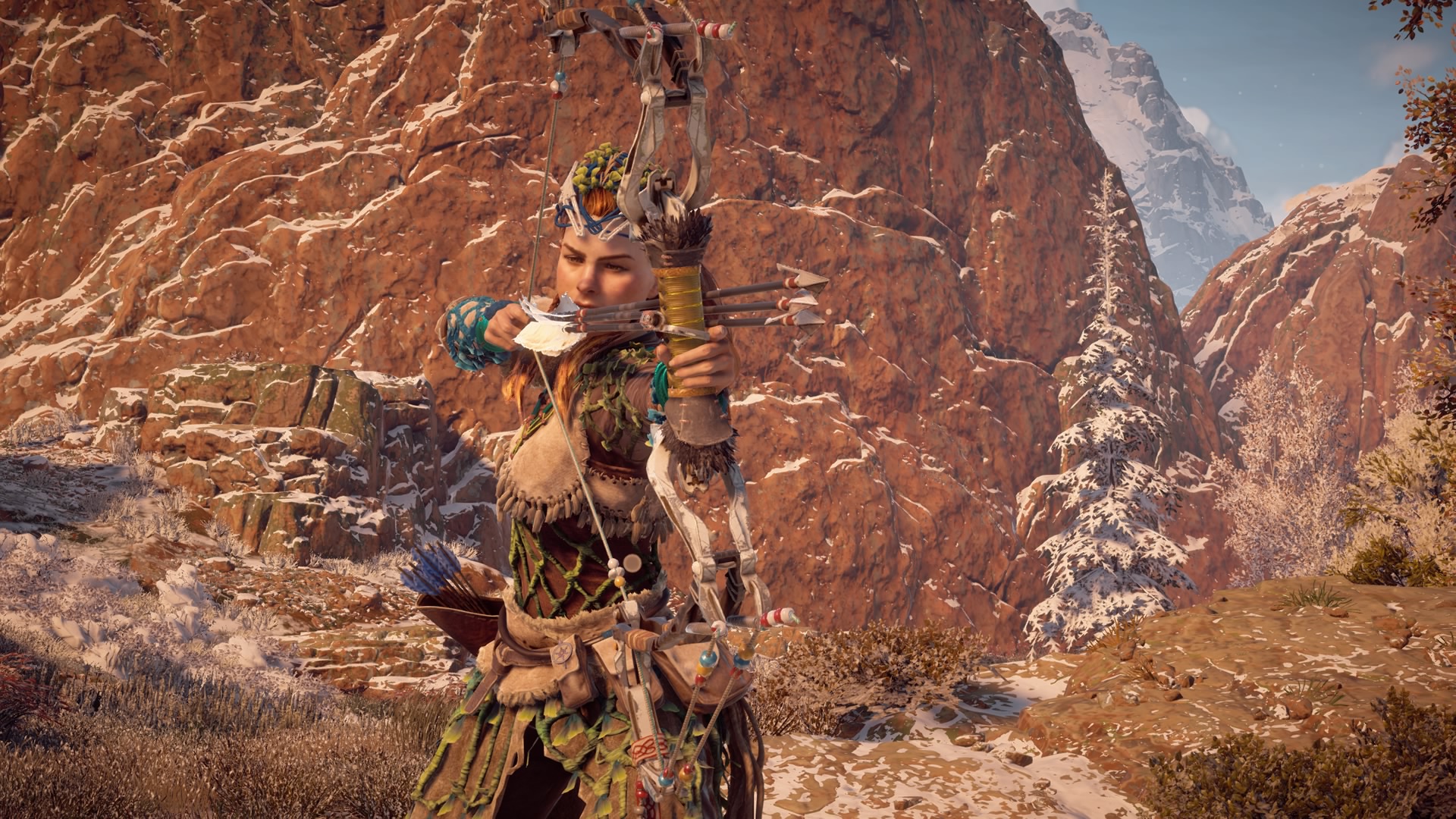 Double shot and triple shot are your best friends

Stealth is all very well and duelling single foes is fun, but there will come a time when you have to fight something too big for either of these tactics. When that time comes, double shot and triple shot are an enormous help.

Arrows have an advantage over sling missiles in that they can be aimed with precision using the Concentration skill, allowing you to knock components off machines and hit weak spots like heat sinks even when you're in a sticky situation. They're also far more subtle if you're trying to be sneaky.

Unfortunately, bows never inflict as much damage or elemental drama as slings do - unless you fire off two or even three shots at once. All but the biggest, most fire-resistant enemies will catch on fire with a triple shot of blazing arrows in their bum - possibly burning to bits while you laugh quietly from a patch of grass on the opposite hillside. Nice.

This triple effect works for the base damage of hunter or precision arrows when you've exposed an enemy's weak spot or gone for a headshot, and allows for very quick machine disassembly with tearblast arrows. 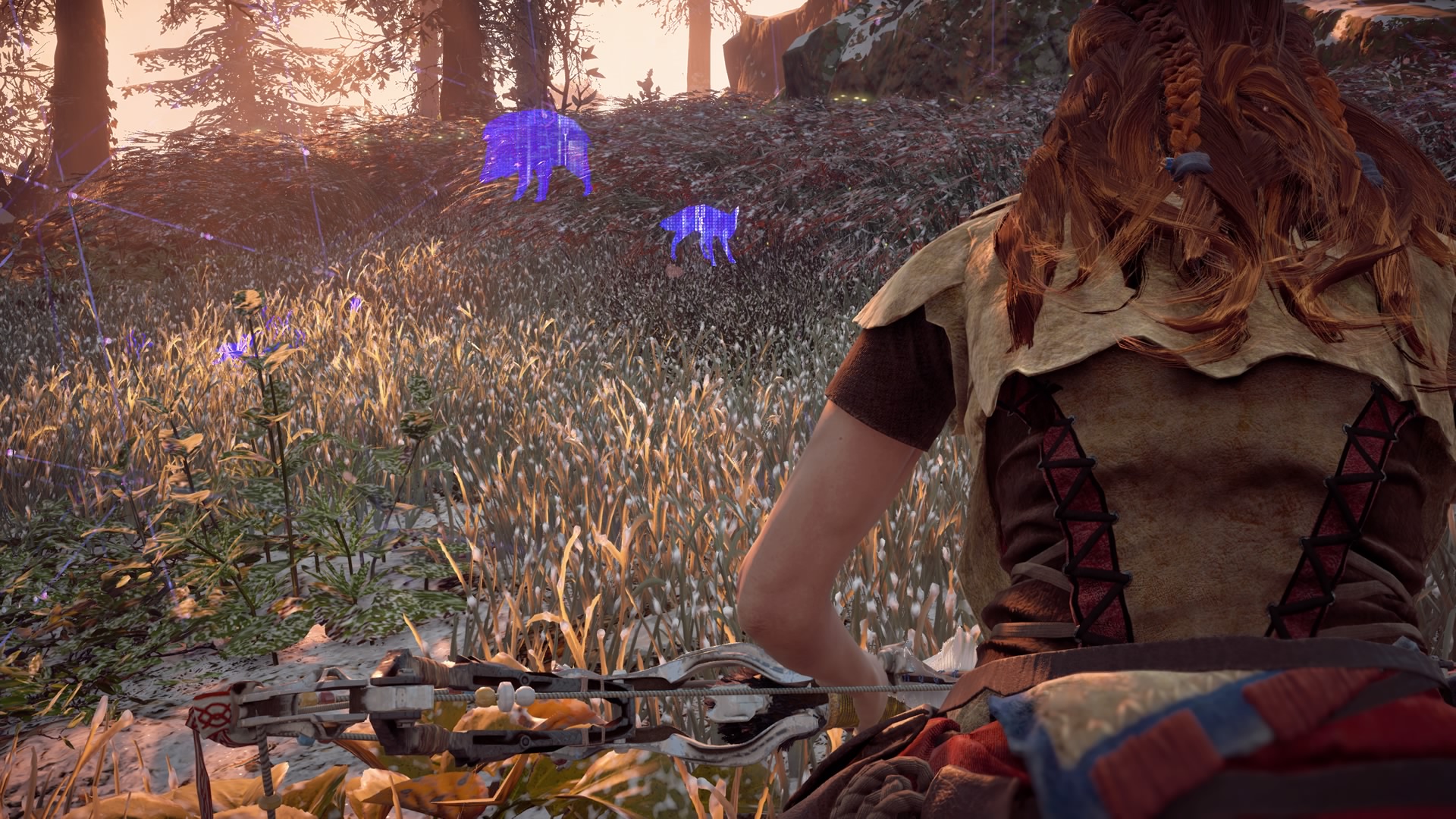 As you run along in Horizon Zero Dawn it's very easy to lash out with your spear at nearby foxes, racoons, boar, turkeys and rabbits. You should absolutely do this, and never mind their unhappy squeals.

Animal parts are required to craft inventory upgrades, and believe us - you'll definitely want to expand your inventory as quickly as possible so you can carry more ammo and consumables. Some of the later upgrades require rare (blue) items like bones and skins, as opposed to common (grey) or uncommon (green) drops. If you grab everything you can as you wander along so you don't have to grind for drops later.

Animal drops can also be sold to merchants or traded for fast travel packs, but don't overlook meat as a source of health potions - vital back up when you're stuck in a dungeon or a major battle and can't go picking flowers for your medicine pouch. Check the tools and potions section of your crafting menu to discover you can turn your grim harvest into lovely health potions. Now we know why they're red. Urgh. 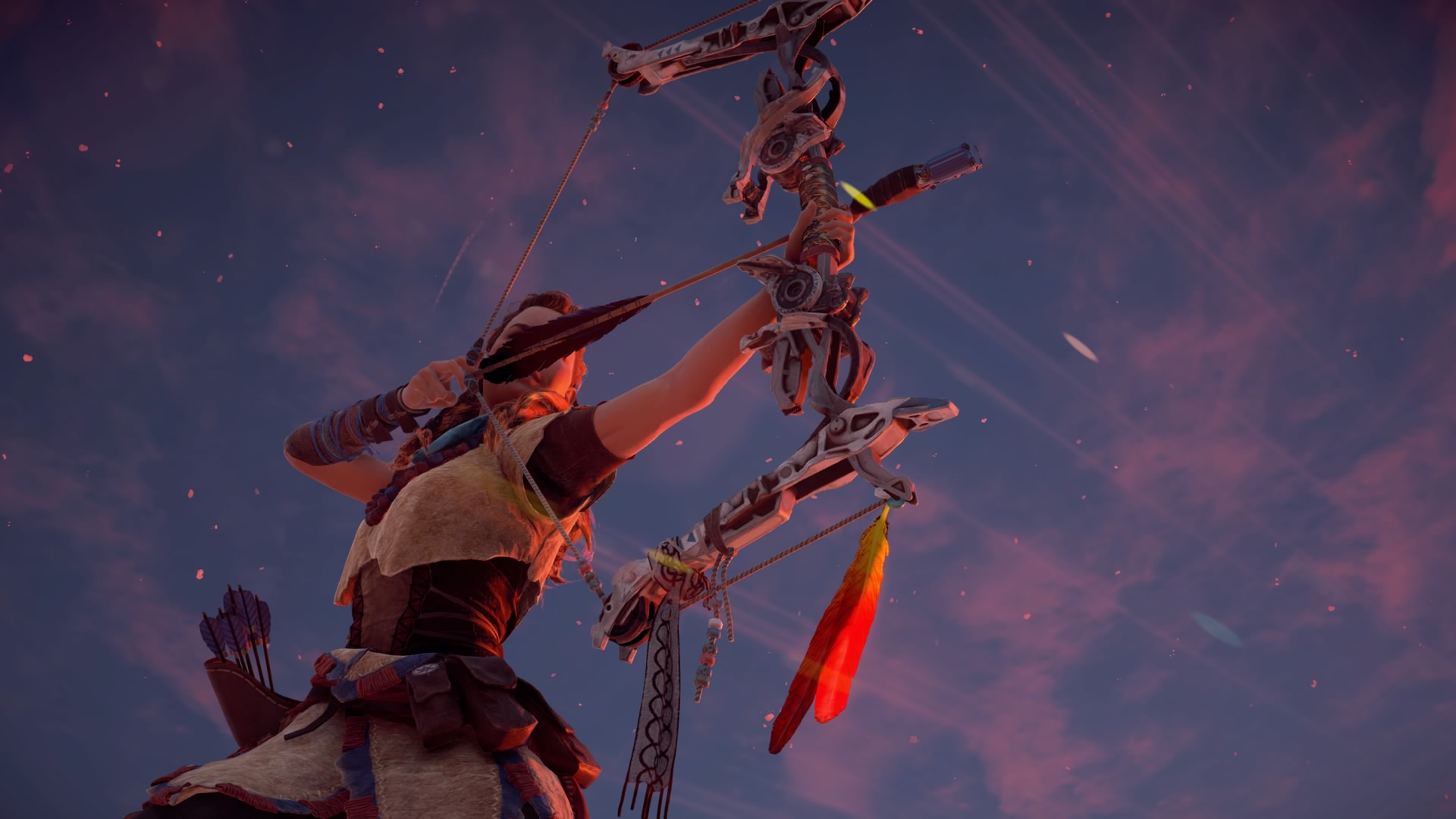 Levelling up helps you unlock new skills, but the real difficulty gating in Horizon Zero Dawn is gear: it’s much easier to take down tougher enemies with the right tools.

Starting gear can only fire one type of elemental ammo, but Carja equipment can handle two and Shadow weapons can handle three different types of projectile. You’ll have a great many more tactics at your fingertips if you upgrade.

The exception to this is the Ropecaster; the more rare your Ropecaster, the heavier the enemies it can tie down - and the faster it works. You can see why you'd want to upgrade that one, too.

If you complete the Hunting Lodge quest lines you'll score slightly better versions of three of the main weapons. They don't offer any new ammo types, but they do boast better reload and aim speeds than even the Shadow variants, so grab them if you can. When you start The Frozen Wilds, be sure to chase the Bluegleam weapons, and look out for opportunities to upgrade the three new elemental weapons you unlock through the main quest. 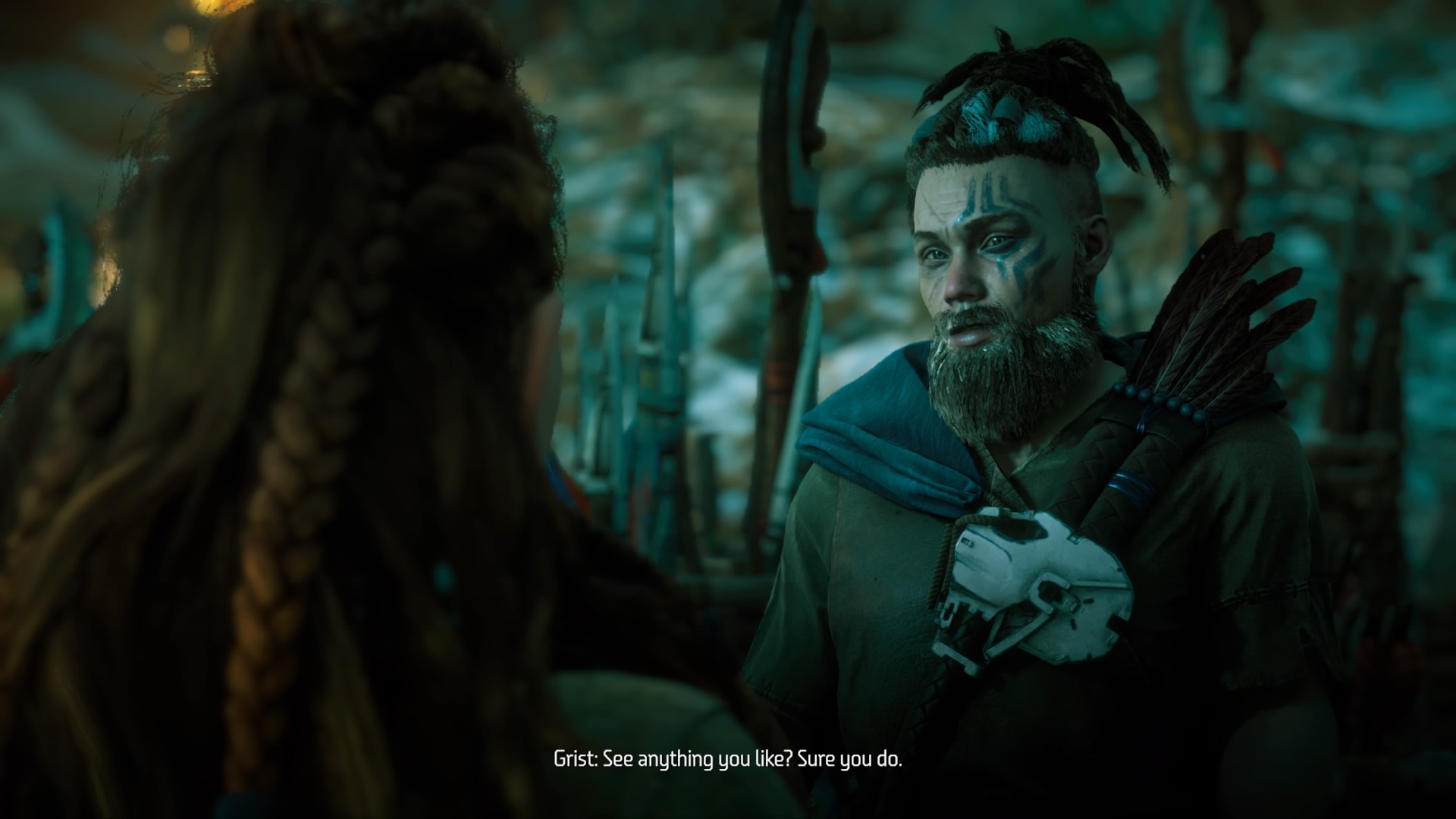 Use the job system to acquire good gear faster

Apart from a few quest rewards, all the weapons in the game are available to purchase from merchants, with more powerful options becoming available the further you get from the starting area.

As discussed in the previous slide, you should always try to buy the best gear on offer as soon as possible. You’ll need more than shards to buy the best stuff, though; merchants will demand you hand over items as well - sometimes quite rare ones.

Luckily, you can use the “create job” feature on the merchant screen to craft a bespoke errand in your quest menu. Set it as active and head to the appropriate machine hunting ground for a quick turnaround.

The job system not only allows you to set yourself a to-do list and guides you to the appropriate area, it also provides notifications when you grab what you needed, saving you from examining every corpse you loot. It may even increase your drop rate for that particular item - or maybe it's just that you pay more attention to something you've been thoughtlessly selling up till then. 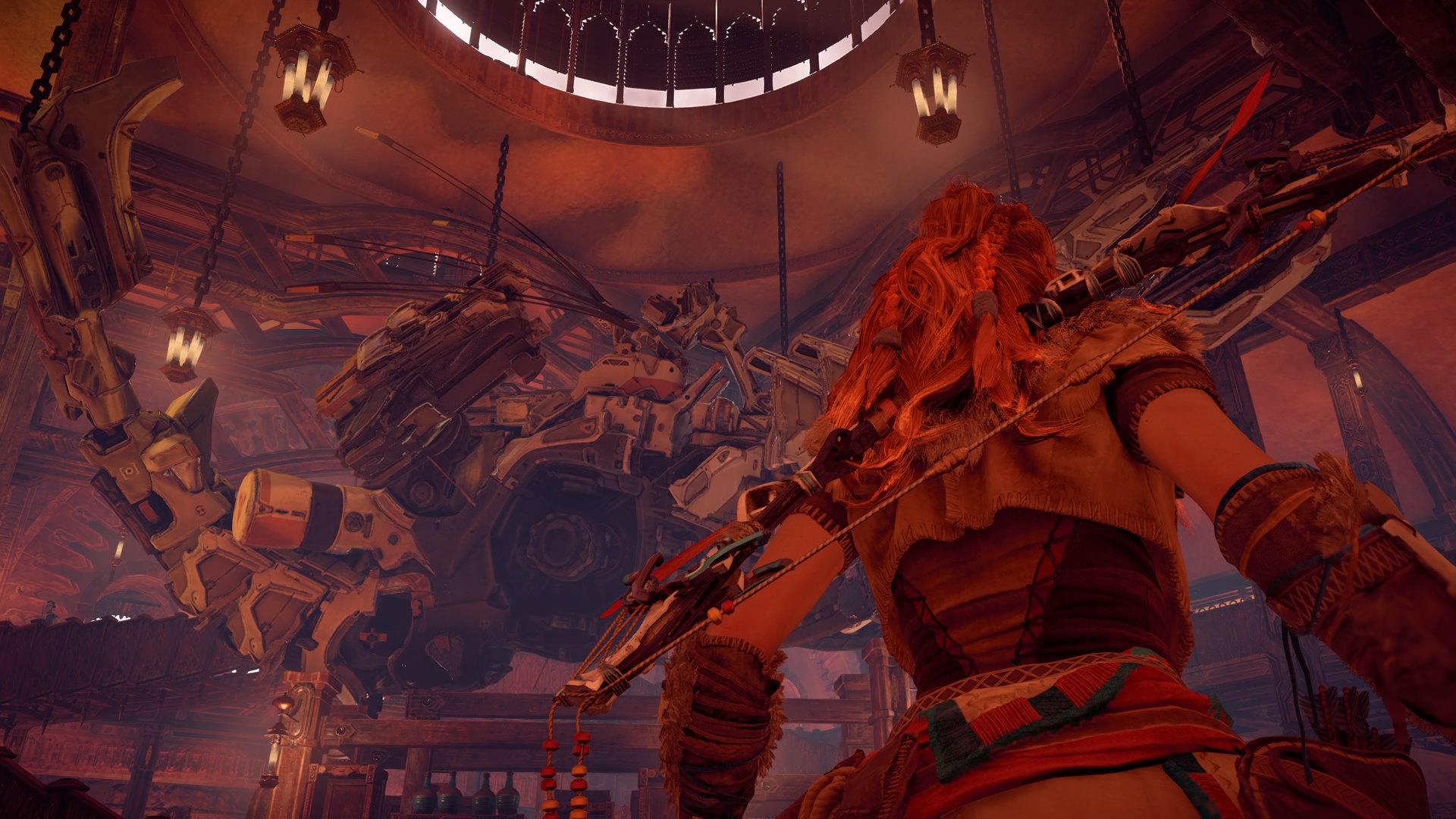 A lot of open world games include optional quests designed to test your skills, but unlike many of its rivals Horizon Zero Dawn doesn’t require you to have perfect reflexes: these are tests of brain, not brawn. Figure out each of the puzzles in the Hunting Grounds, and you’ll be well set up for the rest of the game.

Each of the challenges in the Hunting Grounds arenas can be solved quickly and easily with the right tactics and gear, and once you figure out what the “trick” is in each one you’ll find the time limits are pretty comfortable.

The Keepers will offer small clues, and the merchant nearby offers the appropriate gear. That’s not to say more powerful, later equipment won’t help you shave a few seconds off, but take a look in the merchant inventory for a bit of a hint on what you should be using below.

Don’t just dive right in though! Observe the positions and behaviour of the herds below and think carefully on your choice of starting position. It matters. 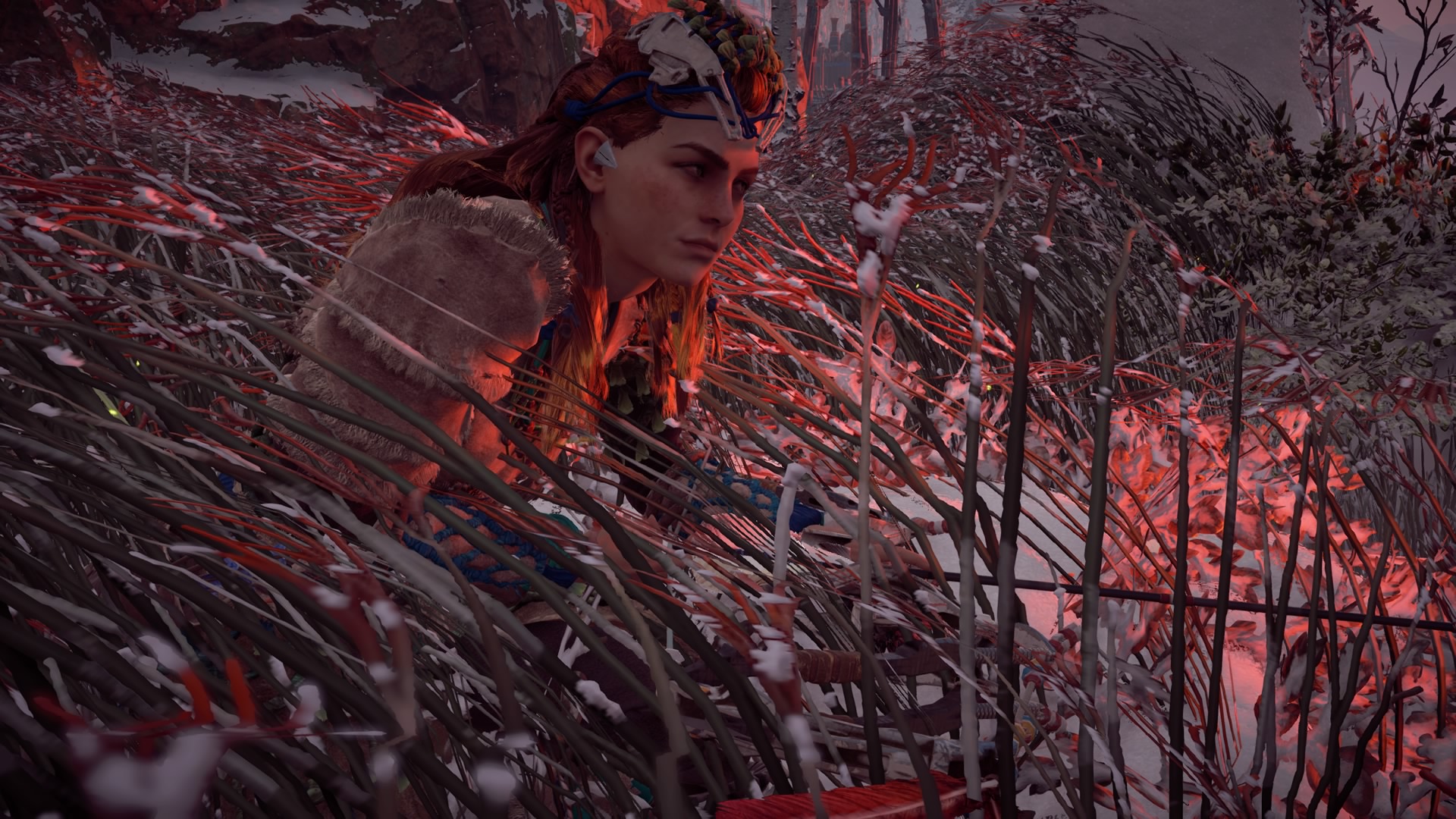 Although you'll have to enter open conflict for all the big baddies, stealth is one of the most powerful tools in Horizon Zero Dawn.

Although baddies can hear Aloy's movements (the brackets around the eye symbol show how noisy she's being) and her weapons and becomes suspicious, they won't go into full alert until they've had a good eyeful of her. Break line of sight before the alert symbol goes completely red to evade notice. You can also or any environmental object or even elevation to get or stay out of enemy view.

Long, red-tipped grass provides cover unless an enemy is fully alerted, but even when things get busy you can use it to your advantage. Enter a big enough patch of cover and you can move out of the area the the enemy is searching - sometimes even if they actually saw you go in.

Since machines and human foes alike almost always hang out in groups, stealth allows you to control aggro as you work out a strategy for dealing with them. Mark every enemy with your Focus, check their weaknesses, and snipe off the outliers. If they come looking for you, just move to another patch of cover. 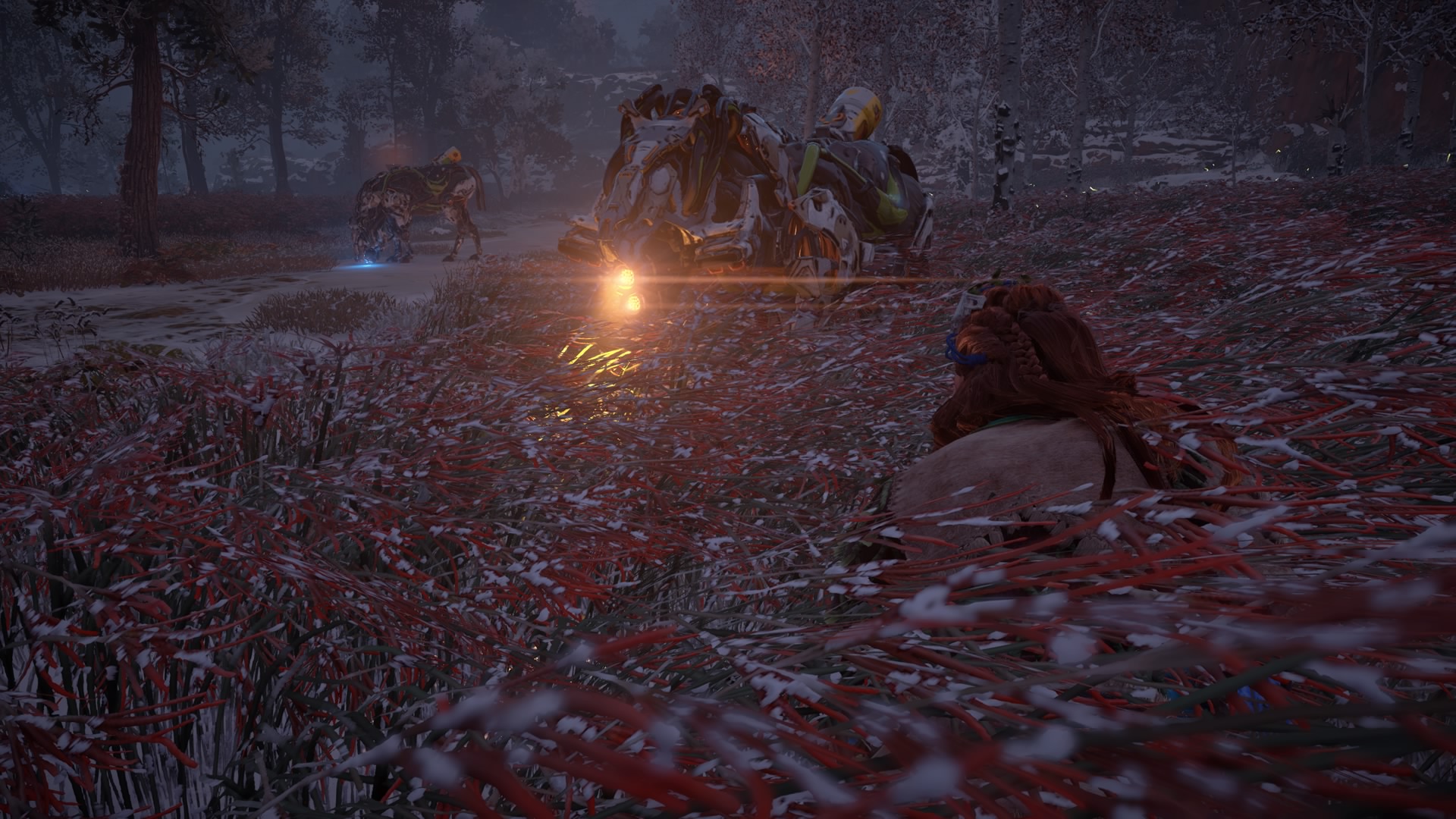 The AI in Horizon Zero Dawn is pretty dim and stealth is disastrously effective against all but the biggest enemies once you purchase a few upgrades.

Silent strike is a one-hit kill against weaker foes, and with a few upgrades, does huge damage to everything else, too. When fully upgraded it can take down every human enemy in a single blow.

Combine silent strike with lure for best results. This cheap skill allows you to target one enemy and call them over to you for a quick kill. You won't be seen as you do this as long as you get back into cover quickly, and if you lure your foe into the middle of a patch of grass, his pals won't even see the body.

Rocks have a different function; you can use them to pull one or groups of enemies away from you in any direction. This is really useful when you're trying to get into position in a herd without alerting them, or to prevent a nasty baddie from stumbling over you on patrol. 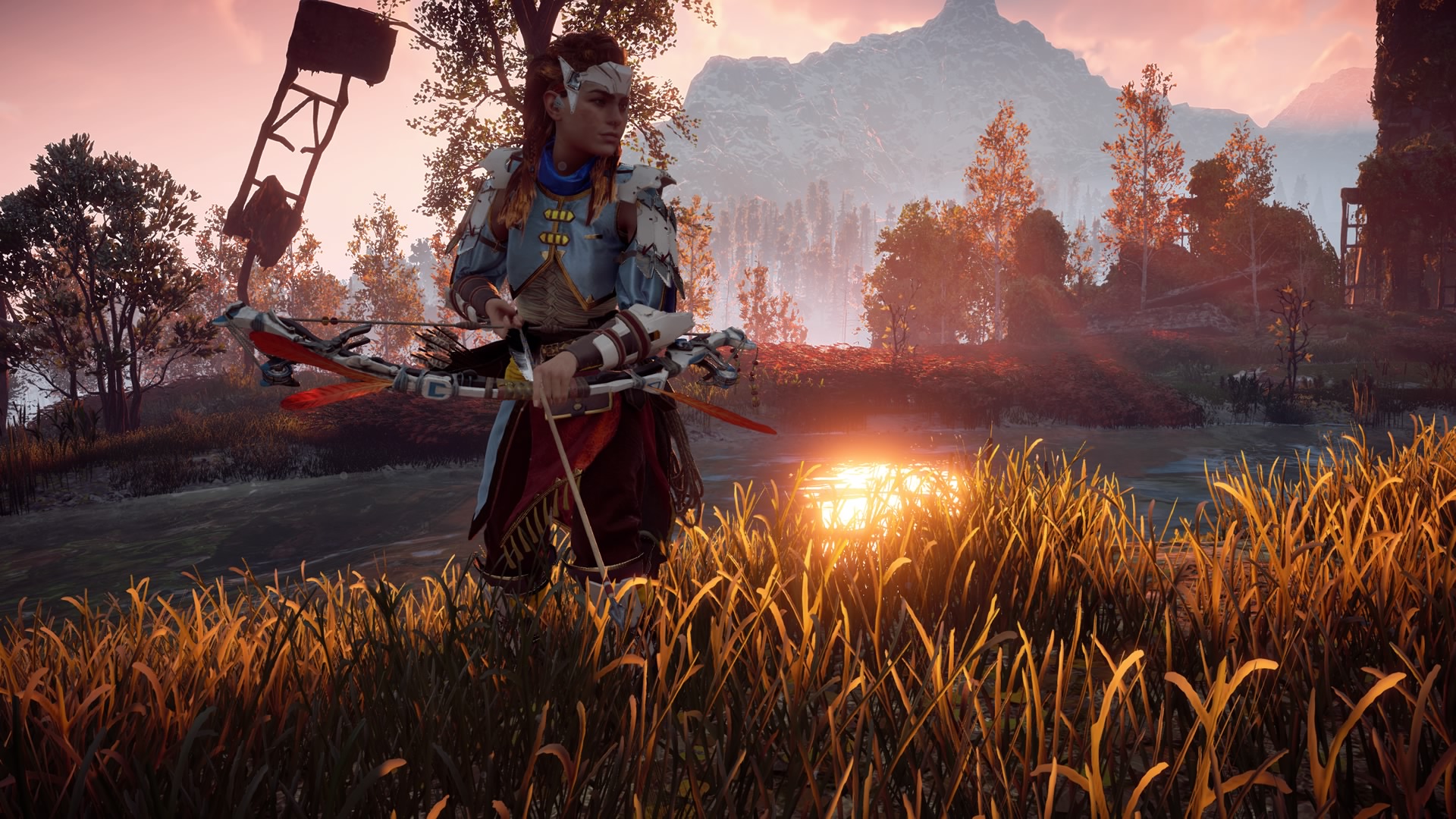 Wear the right gear and use resistance potions

In the early hours of Horizon Zero Dawn when you’re sneaking around stealth killing Watchers and Striders it’s easy to overlook elemental resistances, but they make a huge difference. There will come a time when you simply must face an enemy in open combat, and while we have no doubt that you’re such an elite gamer that you’ll dodge every attack – better safe than sorry, right?

There’s no reason to hoard health boost and resistance potions - crafting materials are common as muck - so pop them every time you go into a big fight. Big batch of Glinthawks? Freeze resistance will minimise the hurt. Behemoths charging and nowhere to run? Buff yourself against Shock.

In the same vein, don't forget to change outfits and modify them to boost their bonuses. Sacrificing style for a few minutes in order to make yourself almost totally fireproof can make a huge difference.

Oh, and if you're going for a totally silent infiltration, the silent hunter suits look silly but works wonders, especially when modded.

Got any hot Horizon Zero Dawn tips to share? Chime in below.