Star Wars Battlefront and Need for Speed publisher EA has been unceremoniously dumped from the top of Metacritic's annual publisher rankings list.

In 2016 EA was number one in the major publishers category, but in 2017 it fell out of the category altogether and placed fifth in the mid-size list behind Nicalis, Paradox and Devolver.

For entry onto either list, Metacritic considers four criteria; average Metascore for all games released in the year, percentage of good scores (a Metascore of 75%+), percentage of games with bad Metascores (49% or less), and the number of Great releases (Metascore of 90+ and at least 7 reviews).

A smaller release slate and poor critical reviews saw Electronic Arts plummet out of the charts for the big boys and into the middling charts.

Two of the biggest critical beatings for EA last year came in the form of Star Wars Battlefront 2, which bungled its own launch and left it mired in loot box controversy. Also disappointing was the Need for Speed reboot, which failed to capture the attention of critics.

Sales and user reviews do not factor in the rankings, said Metacritic.

In the annual rankings, Metacritic's top major publisher was Bethesda, just beating Nintendo, Sega and Activision to the accolade.

Wolfenstein 2: The New Colossus, Prey and The Evil Within 2 all ranked highly, with 91 percent of Bethesda games reviewed positively. 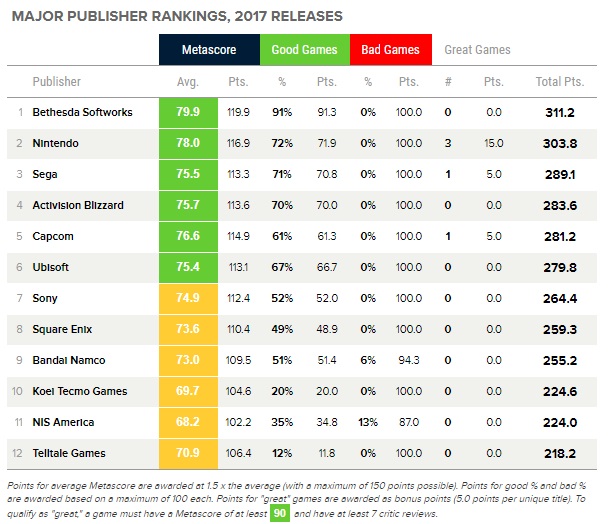 You can check all the scores and rankings on Metacritic.