Destiny has graced the cover of GameInformer's January issue, and as usual the press has picked its paper bones clean of news. See what's what here. 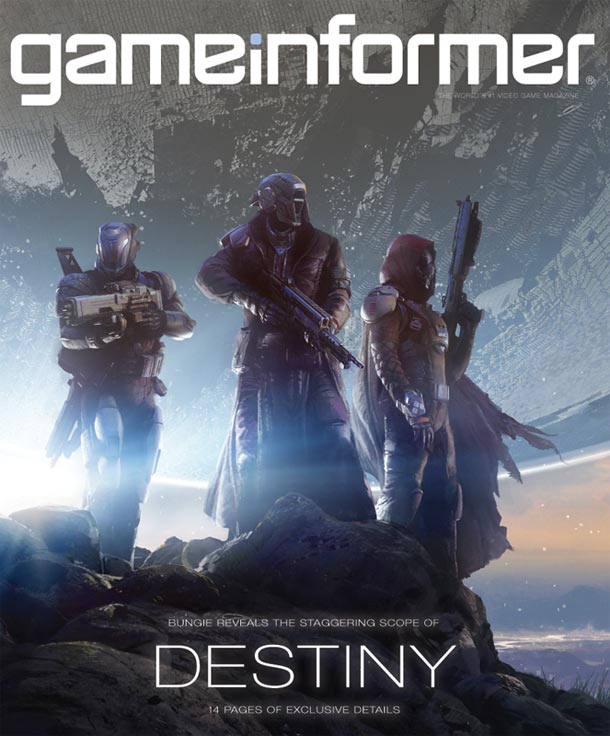 OXM has hoovered up the news crumbs, and explains that each of the game's three classes - Hunter, Titan and Warlock - can equip the same guns, but that armour sets remain tethered to specific classes. Players can further tailor their class with a specific 'focus.'

Focuses can include anything from weapon stat bonuses, the ability to double jump, a teleport move, new grenade types and a selection of special moves. For example, I covered the Titan's 'Nova Bomb' focus back at gamescom when I interviewed Bungie. There's also the Warlock's 'Heart of Fusion' support focus and 'Circle of Night' attack skill, as well as the Titan's 'Fist of Havoc' shockwave focus that's basically an electrical DPS move.

Setting include Old Russia on Earth, the Vex Citadel on Venus, the Moon and Mars. Across those environments you'll encounter several alien enemies including, pirate warband the Fallen, the Hive - who OXM reckons have taken a leaf out of the Zerg's style guide - robot force the Vex, industrial heavyweights the Cabal and man-made machine race the Exo. We look forward to killing you all.

The site concluded by spooling off new online features such as co-op across the campaign, raid and strike modes, as well as PvP battles involving zone capture and deatmatch events.

Phew. Well then, what do you make of that?