With the changing of the season comes a brand new Artifact: The Lantern of Osiris. Created by the legendary exiled Warlock to aid in his mysterious travels, The Lantern of Osiris offers a fresh suite of powerful mods to progressively unlock throughout the Season of Dawn.

As usual, there are five tiers of mods for your Guardian to unlock - with a new tier opening up once you acquire 1, 4, 7, and 10 of the other choices. 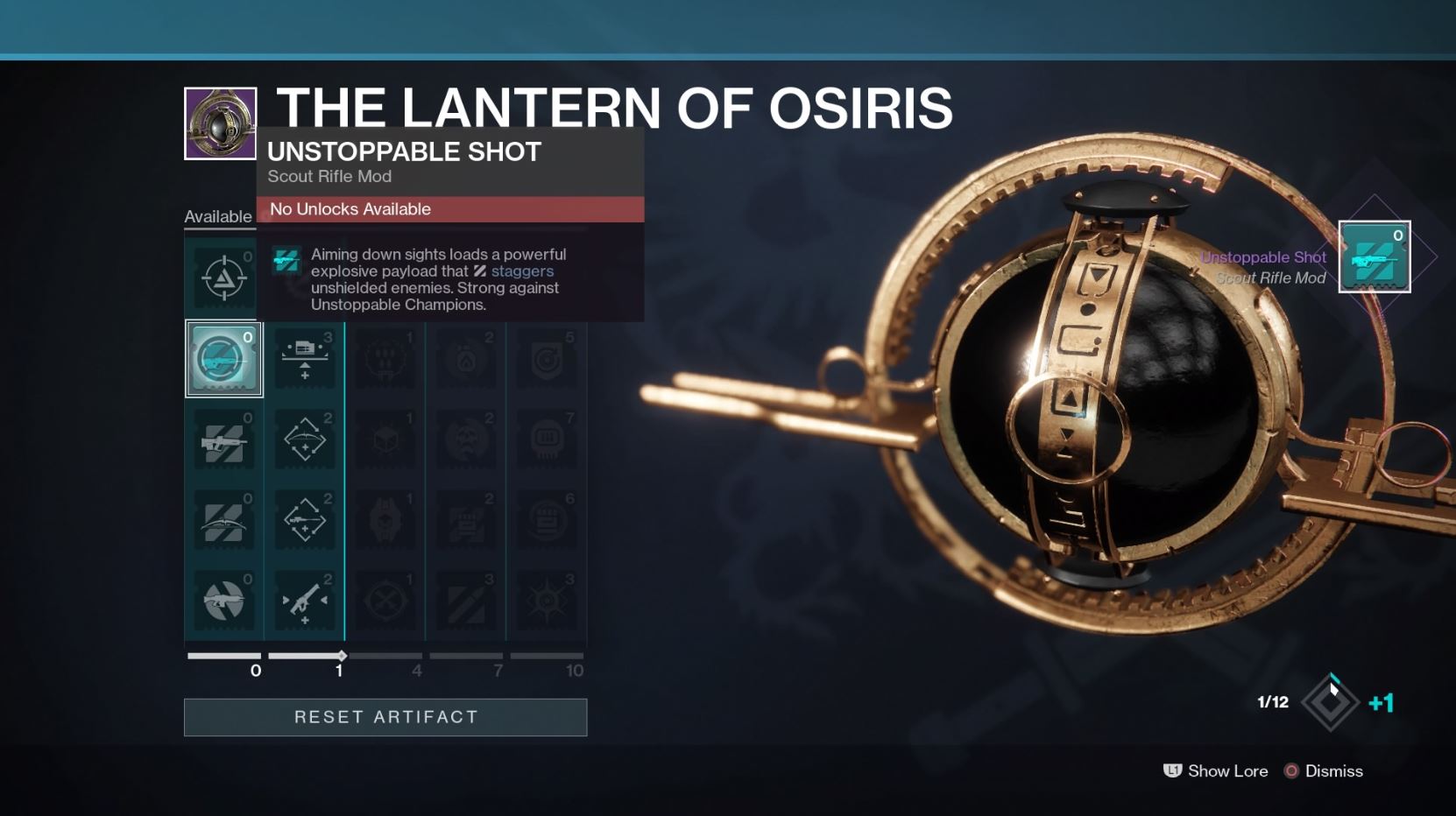 To gain one unlock token, you need to bank a big chunk of experience through normal play - including everything from shooting regular baddies to completing larger activities. And as you advance through the levels, you get a small boost to your overall Power too.

A quality of life feature of the Artifact system is that this Bonus Power applies to every Guardian on your account, so you don’t have to grind out levels with both your Titan and Hunter characters for example.

Not only is this extra Power useful for accessing top-tier activities, but also allows lowlier players to push their loot closer to the max.

The full list of Lantern of Osiris mods are below, followed by some meta commentary on how you might like to progress through the mod tiers.

The first tier of Artifact mods principally deals with Champion level enemies, who come in three varieties: Barrier, Unstoppable, and Overload. These types of enemies appear in high-level activities, including the new Sundial Arena runs on Mercury and Nightfall: The Ordeal.

It’s worth noting that the Anti-Barrier Ranger mod is the only Artifact Mod offered that specifically targets Barrier Champions, so could be worth picking up if you plan on facing off against them. Other than that, go with your preferred weapon choices from the variety on offer, which include: Scout Rifles, Pulse Rifles, Auto Rifles and Submachine Guns, and Bows.

The second tier of mods includes mods for each of your armour slots, and this season looks to favour Rifle-Class weaponry, while also dishing out buffs for the more situational Sniper Rifles, Bows, and Linear Fusion Rifles. Enhanced Rifle Loader and Enhanced Unflinching Rifle Aim have obvious synergy.

Since the third tier of mods mostly deal with buffing your Glimmer acquisition, you’ll likely pick up most of the mods from tiers one and two so you can reach the 7 unlock milestone - unless you’re doing some heavy-duty upgrading in the near future which will suck up all your Glimmer.

At tier 4 you have another chance to grab mods which target Unstoppable and Overload Champions if you passed them up earlier. After their rework, Solar Subclasses are looking strong, so buffing their grenades even further with Molten Overload isn’t a bad idea.

While the higher cost Breach Resonator, Disruptor Strike, and Tenderizer would synergize well with the 0 cost mods from tier 1, improving the effects of Shield-piercing, Staggering, and Disrupting. The Tenderizer looks especially good if you play with a regular fireteam.

Finally, the tier 5 Artifact mods tend to be the highest energy cost and have the most powerful effects.

Which you pick this season looks to be heavily dependent on your playstyle. As we mentioned before, the Solar Plexus looks good with the reworked Solar Subclasses - especially the spammable Titan Throwing Hammer in the Code of the Devastator.

While if you prefer a Void Subclass, then Void Battery is the way to go.

If you like to play more of a support role within a fireteam, consider Heavy Finisher, which prioritises keeping your Heavy weapons stocked at the expense of your Super.

But if you tank damage while you line up the perfect shot, then Guardian Angel - which generates healing orbs when you land precision final blows with accurate weapons like Bows, Scout Rifles, Sniper Rifles, and Linear Fusion Rifles - could be an option.

Now that you're kitted out with new mods, you need to some gear to fix them to. Here's our Season of Dawn Ritual Weapons guide to get you started.

Or if it's Exotics you're after, here's how to get your gauntleted hands on Saint-14's Perfect Paradox Shotgun from the Recovering the Past quest.