Dark Souls 3: Ashes of Ariandel gets twisted, but at least you can get those Corvian Knight weapons now. 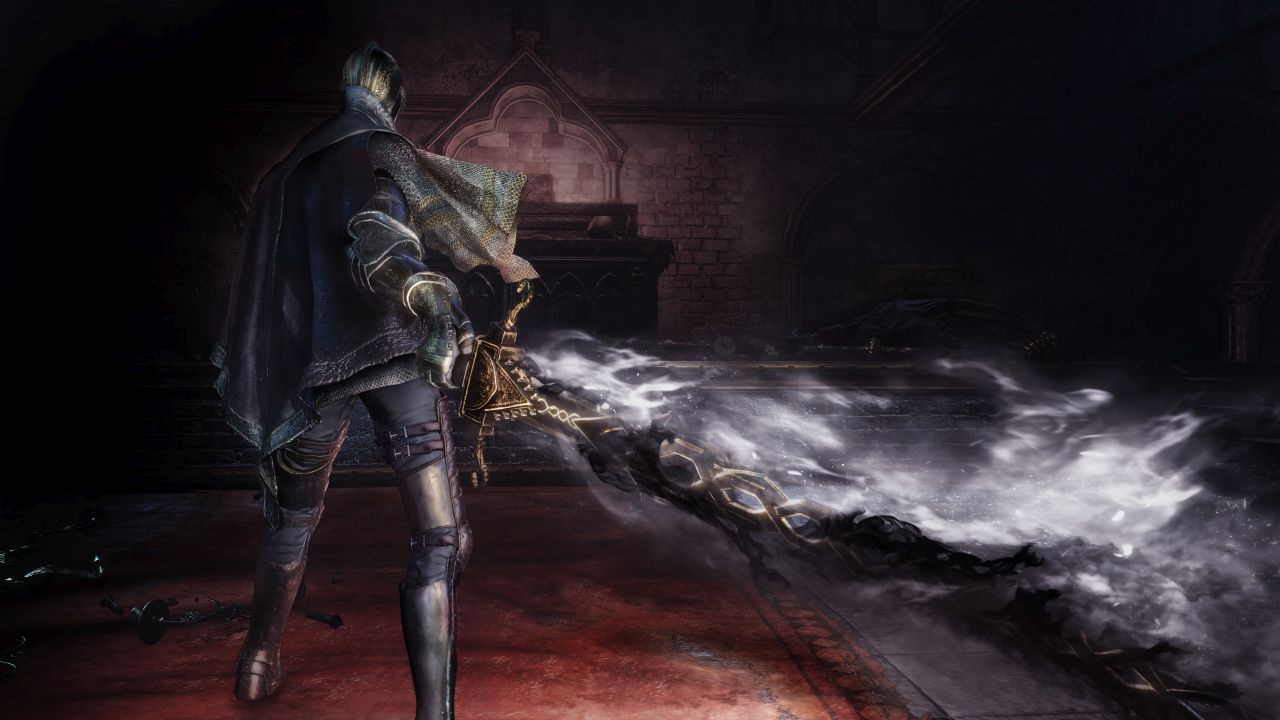 Continuing our Dark Souls 3: Ashes of Ariandel walkthrough, welcome to the Corvian Settlement.

There are loads of rotting corvians around here but in general they're not a problem; the ones that wander around won't attack until you get right up in their business. Only the ones standing in place are properly aggressive - watch out for the spitters.

Before we get started, note that the first part of this will be some optional treasure hunting, which will lead you past the Corvian Knight you battled to get to this bonfire. You can cheese him with arrows from this high ground to take the stress out of it, or just skip down a few paragraphs.

Treasure hunting, then. Leave the bonfire room and stand on the little bridge. Look slightly left to spot a spitting rotted corvian, whom you may want to take out at range. In any case, cross the bridge and climb around the rocks on the far side to skirt the little house and get to where it was standing - a normal rotting corvian will attack out the doorway. Once it's down, go inside and collect the ember.

Go back out the house door and turn right to see another small bridge. If you drop down on the right you'll be behind that locked gate near the swamp - but be sure to snipe the crawler down there first if they worry you. Your reward is a simple gem.

Climb all the way back to the seocnd little bridge you just dropped from, but this time cross it and follow the little ledge path around. Beware the rotted corvian who ambushes you on the way, but don't bother with the one you see standing right at the end - there's another ambush there and no good reason to go over there anyway.

Instead, you want to jump across the little gap to reach the hole in the wall of the bonfire room, so you can grab the soul. Don't drop down; see the sheltered stone walkway just here? There's a spitting rotted corvian inside to deal with. Once its down, you can skirt around the other side of the bonfire room to spot a crystal lizard.

Just one more thing to do up here: break the crates to find a ledge above the swamp. Jump from here to reach that boulder in the middle, where you can collect the Crow Quills weapon.

Okay, enough treasure hunting: let's move forward. From the bonfire, cross the little bridge and head up the path towards the church. A Corvian Knight will drop down. This one fights with Crow Quills so be wary of its ranged attacks. Luckily, you can cheese this guy; he doesn't want to cross the bridge, let alone enter the bonfire room. Ping him with arrows.

When the knight is down you can go to the end of this path, which is a locked gate. Facing the gate, turn right and walk right to the edge of the abyss, then turn right and hug the edge to drop down to a doorway. Kill the two bugs inside for a dark gem.

Exit the building and turn right, dropping down again. You're back on the main path here, as it goes around these buildings. There are loads of aggressive rotting corvians here, so be cautious. Keep following the edge of the abyss and you'll come face to face with a spitting rotted corvian. Kill it, then keep exploring the edge of the abyss - you'll be attacked by a second spitting rotting corvian on the right, just behind the wall, but you can grab a soul.

The building you just passed holds nothing of interest so take the little flight of stairs near its door instead, which leads you to the ladder to the rooftops. As soon as you get up, turn around and drop off onto the walkway below, then dive inside the door right by you to shelter from the two rotted corvian mages across the way. Climb down the ladder and open the door for a shortcut from the bonfire.

Climb back up and sprint across to the other doorway under the two mages; don't worry, we'll be back for the item. Walk along the catwalk inside the building and pass out the other side to reach the wall. Follow it around for a gangplank to the roof. Kill the two mages and you can safely grab the Crow Talons weapon before dropping down to get the soul we just passed by.

Trot back over the bridge and drop off to the right to get back to the ladder. Climb back up to the rooftops. The little tower in front of you is our goal, but be careful - there are four rotting corvian mages on your left (two on this level, and two tucked into the corner one roof down) and another one across the way (who rarely aggros).

Enter the tower and drop down to fight three spitting rotting corvians in close quarters and collect the slave knight gear set. Open the door and make your way back to the tower, but this time take the ladder up. You can drop off the bridge at the top to reach the base of the tower and grab some Rusted Coins. It’s easy to quickly get back to the tower and climb back here again.

Let's proceed. After you cross the first bridge and round the corner you’ll spot a crystal lizard on the second bridge. If you chase it you’ll almost certainly end up with a Corvian Knight (talons) on your head, which I personally consider less than ideal. I can’t tell you what’s in that tower because once was enough, thank you.

Go the other way instead, and grab the soul from the peaked chapel roof. There’s a ladder at this end of the building, which you can use to reach the ground and open the churchyard gates - but it’s worth hanging out on the chapel roof a bit longer.

There are four windows leading into the chapel below and you can cheese the two corvian knights inside through them; one has talons and the other has quills. When it's safe, drop into the room from the window diagonally opposite (kitty-corner) the ladder to land on a beam so you can collect a soul, then down to the floor for the spell Way of White Corona (faith discus). Open the door to exit. Make sure to open the churchyard gates for a shortcut; we're heading for the big church now.

Beware two weeping dryads near the church wall as you approach the doors. Go past the doors and around the church to find a young white branch guarded by another weeping dryad. Some rusted coins await in an alcove right at the end.

Enter the church. See the figure in the distance? That’s Sir Vilhelm. He’s a darkwraith of sorts, which is not much fun, but he’s also bonkers stupid. Run away and climb onto the chapel, and for some reason this makes him super reluctant ever to leave the church. He’ll just keep dashing out a bit (giving you a smack if you're close enough) and then wandering right back in, over and over again.

Sniping him from the roof is boring and difficult, because he heals himself and it's difficult to interrupt if he goes into cover, but you don't have to melee him: go down the ladder and when he comes out, dodge backwards a few times, avoiding his attacks. As he backpedals, fill him with arrows. Do this until he dies.

Sir Vilhelm drops the Contraption Key and Onyx Blade. The Contraption Key can be used on the lever at the back of the church, near where you first spotted him, to drop some stairs leading to the upstairs area. Talk to the NPC, a woman drawing on the table, a few times.

Still in this upstairs area, head outside onto a balcony, then hug the right wall to find a drop down. Follow the short path around to unlock a door leading back into the previous room – and light the Snowy Mountain Pass bonfire.

Phew, what a winding path! Our next goal is to open the shortcut back to Ariandel Chapel.