Dark Souls 3: Ashes of Ariandel offers you a chance to collect the Corvian Knight weapons - but first there's this short crawl. 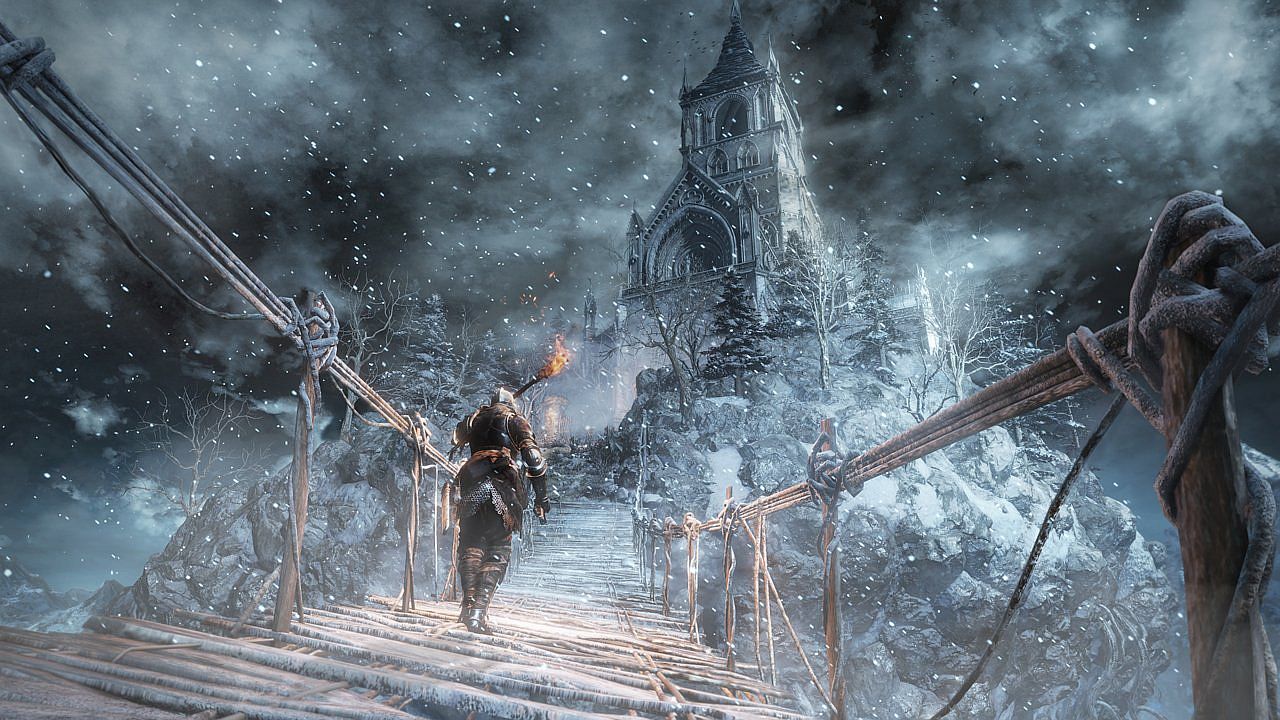 Our Dark Souls 3: Ashes of Ariandel walkthrough now continues onwards into more danger - although thankfully out of the snow.

Update: before we move on to the next area, take a perfectly safe detour across the rope bridge. The praying creatures on the other side are harmless. Go around the right side of the church to collect a hollow gem, then speak to Vilhelm at the doors. Open the doors and light the Chapel of Ariandel bonfire if you like, and be sure to speak to the NPC at least twice so she'll give you the Chillbite ring.

That's all we can do here for now (there is an optional boss path, but we'll discuss that later), so return to the Rope Bridge Cave bonfire, and then face the bridge back towards the chapel. Search the edge of the abyss on the left side of the bridge for a ladder.

At the bottom of the ladder you can go up or down. There's nothing on the upper path but two bugs and a dead end, so head the other way.

A crystal lizard tempts you halfway down; don't fall off the path chasing it!

Further down you'll see a Follower with a torch. This is a trap: a second Follower is waiting just around the corner to attack if you rush him. Ping the first one with arrows then go on to melee the second.

You'll come to a one-way ledge - this DLC loves them - with a slippery slope on the other side. Enjoy your slide down.

At the bottom, stick to the left side to climb upwards to a ledge overlooking the next little area - a nasty swamp. From here you can drop down a few times and you can run to grab the green blossoms at the end - but watch out for the rotting corvians and spitting rotting corvian on the way. These baddies are pretty harmless as long as you approach from the side, since they move very slowly. The ones that spit are bigger and darker in colour, making them easy to spot.

Before you drop down to ground level look for the crawler – remember those from Irithyll? You might want to snipe it if it worries you, since there are loads and loads of rotting corvians and a few spitting rotting corvians on the ground.

Don't worry about the boulder in the middle of the swamp yet; we'll return for the item later. Your goal is the arched in the wall bordering the swamp - watch out for the rotting corvian just inside on the left!

The path to the left is locked for now so you're only choice is right, but bwware: a corvian knight with talons will drop down. Theoretically you could run past it without missing much but in practice it usually caught and minced me.

I won't front: this thing terrifies me. It has some long, draining claw combos, inflicts poison, and has an unpredictable moveset. If you can't take it out in one combo, cheese it by pinging it with an arrow at the end of its patrol then legging it away for ages. It takes forever but goodness me, what a horror. Unfortunately, these respawn.

When it is dead you can advance to the end of the path to fight a few more rotting corvians and collect a soul. Look for a ladder on your right and climb up to the next room.

Up here you'll spot an ember and an NPC - and by NPC I mean the rotting corvian in the kitchen is friendly and will talk to you.

Watch out for another rotting corvian as you pass out of the room; it's hostile, but won't attack unless you get close enough to bother it. Kill it or run past looking for a door on your left to reach the Corvian Settlement bonfire.

Our next goal is the Snowy Mountain Pass bonfire, via a very a twisted path with some good treasure on the way. And lots of horrible things, obviously.