Dark Souls 3: Ashes of Ariandel adds a PvP arena, but if you want to get in you have to prove your chops here. 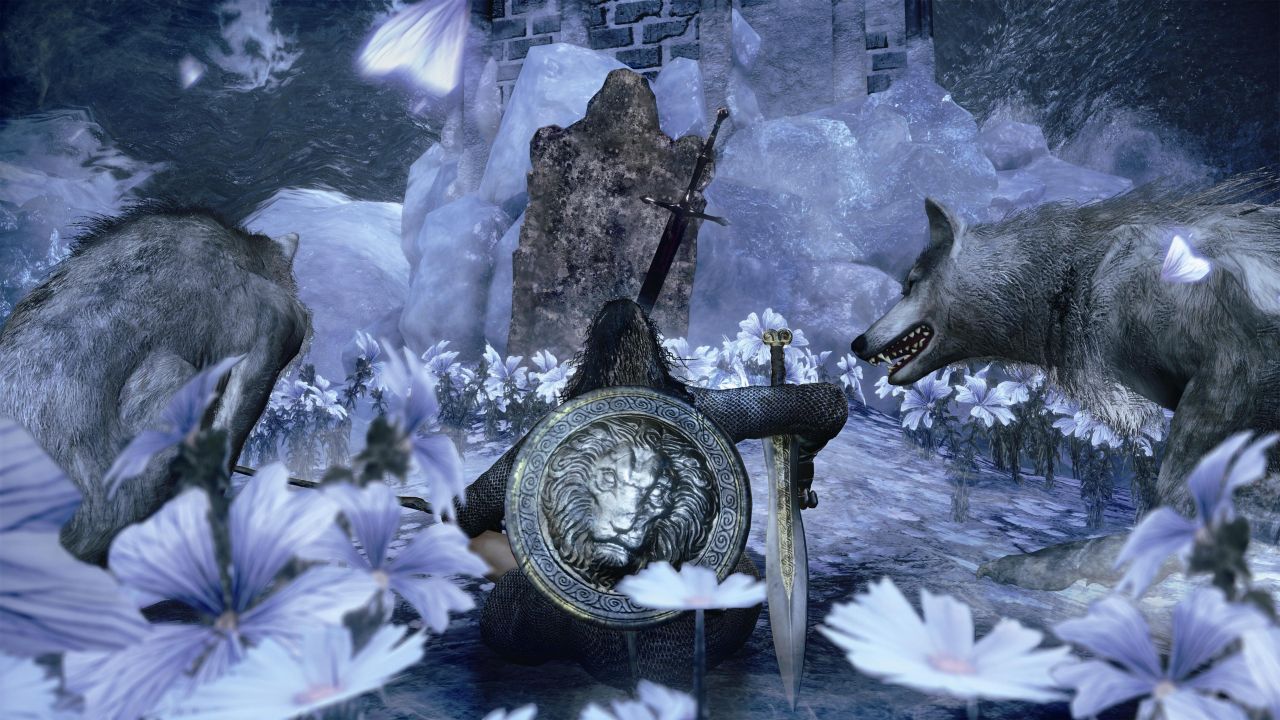 You can tackle this optional Dark Souls 3: Ashes of Ariandel boss as soon as you have access to the area, which is a few minutes after you load the DLC up for the first time if you sprint through.

Why would anyone want to that? Why, because it gates off the new PvP content.

To get to this boss, start at the Depths of the Painting bonfire and locate the boulder which is actually a giant ice crab, then march smartly in the opposite direction from it. I am more scared of the giant ice crabs than the optional boss.

The boss arena is a field of white flowers (remind you of anything?) past a one-way drop at the opposite end of the ice field. The fight won't trigger until you get a good way into it, so you have time to prepare, but the fog wall is at the drop so do your summoning before then; you'll find signs at the bonfire and the drop.

This boss fight is in two stages, and the second stage has two targets with two health bars.

As you approach the ruins the Champion's Gravetender will stand up and aggro. Three wolves will rush you; take them down as quickly as you can before the boss wanders over.

The Champion's Gravetender isn't really too much of a problem, to be honest; if you've ever taken down an NPC you can do this. The trickiest part of the battle is the unfamiliarity of the boss's unique weapon, Valorheart; it has a number of ferocious combos that will break your guard, stagger you and eat through your shield stamina.

As such, your best bet is to keep your distance by dodging rather then trying to block, and to wait for an opening at the end of a combo. The boss is vulnerable to backstabs if you can get behind them, and doesn't have very powerful physical defence; a decent weapon will make a serious impact.

Unfortunately when the boss's health gets down to about half, their friend arrives.

If you dislike giant wolves you're really going to hate the Gravetender Greatwolf. As well as all the usual giant wolf bullshit it has a frost breath that goes through cover and a rush attack that will smash you. The latter makes it tempting to use physical cover, but the former will eat you alive if you try it.

So what's to be done? You pretty much want to stay at the wolf's side so it can't hit you with its rush or breath attack, dodging determinedly whenever it uses that annoying side-swipe slash attack. If you are well out of harm's way when it rushes, you can get a few attacks in during the wind up.

Unfortunately the Champion's Gravetender gets a bit more dangerous during this phase, and if you leave them running around they'll take advantage of the distraction to give you a smack. Even if you manage to keep them at a distance, they start casting spells.

It's a pain, and the best solution is to take the Gravetender's Champion down as quickly as you can so that you can focus on the wolf.

If you have two players, this is a doddle: the Champion's Gravetender is not a speedy spellcaster, so you can get in and wail away (or backstab) whenever they have a go at it, while the second player distracts the wolf. If the wolf is still alive when you take the NPC down, the pair of you can just cat-and mouse the wolf - or if you are a cheeseburger assassin, ping it with arrows and stay out of the way of your lovely melee comrade.

It's really not that tough a fight even compared to Sister Friede, let alone some of the agonising main game's bosses; I'd take this over Pontiff bloody Sulyvahn any day.

Anyway, when they both go down you'll get the Champion's Bones, a key item you can burn at the Firelink Shrine bonfire to open access to the DLC's new PvP arena, as well as your very own Valorheart.

Be sure to light the Champion's Gravetender bonfire; it's back toward the drop off, in an ice pillar that is shattered during the fight. Enjoy the peaceful scenery before you wander off.

If you've been following our Dark Souls 3: Ashes of Ariandel walkthrough, you're now finished with the DLC. Congratulations!