Complete guide to the game's eighteenth mission and finale, The Ghost Killer. 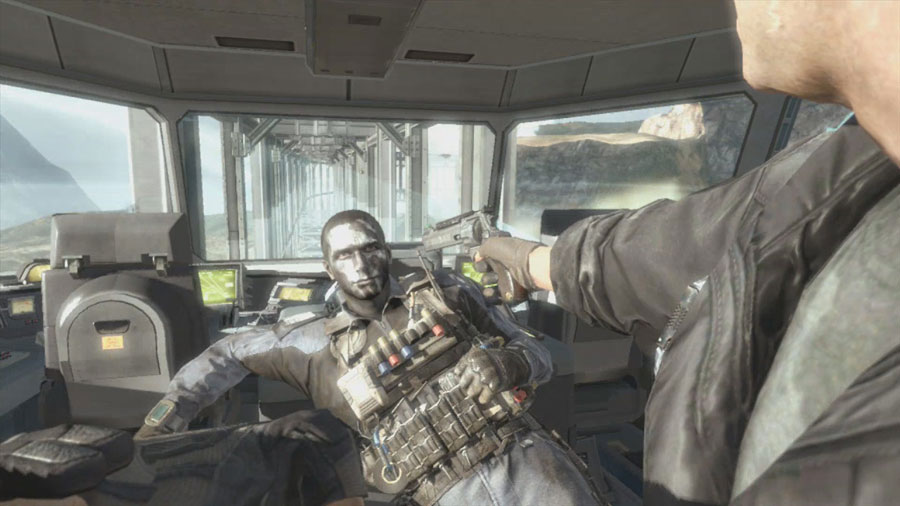 The action begins fifteen minutes before Sergeant Thompson fired the missile at Logan and Hesh. Hesh radios to Merrick that if he gives the command "checkmate", to fire a missile at the train. Follow Hesh towards the front of the train and start dropping enemy targets as you go. The train's moving so targeting is somewhat more difficult. Still, if you aim down sight and pick your shots you should be able to make forward progress.

As you make your way towards the front of the train you'll encounter some enemy helicopters, take out the gunners. When you enter the tunnel it's time to turn your attention back to Federation soldiers. Put them down and keep fighting your way towards Rorke, and revenge. When the train is clear, jump down and prepare to breach the main car.

The breach is another slow motion event. Take down the rushing Federation soldiers to trigger the final showdown with Rorke. He gets the upper hand on Logan and shoots Hesh in the stomach. At one point or another, he's now shot Hesh, Logan and Elias, the entire family. Facing imminent death, Hesh gives Merrick the "checkmate" order. Rorke demands to know what he's done, just as the missile makes its impact.

When you come to the train car seems to be hanging in the air, possibly from the bridge. Rorke tries to shoot Logan but is bashed over the head by Hesh. The two engage in hand to hand combat while you pick up the .44 Magnum on the floor. The gun is empty but Hesh tosses you some rounds. As Rorke tries to get reach you, Hesh grabs him from behind. Fire your gun to shoot Rorke, but the bullet travels right through him and into Hesh as well.

As the train plummets to the water below grab Hesh and start making your way out. You reach the surface, both brothers still alive. Drag Hesh up the beach as he checks in with Merrick. He tells you to sit tight as your evacuation comes for you. Hesh looks at Logan and tells him he's proud of him.

As the credits start to roll don't leave your chair. We soon cut back to the brothers sitting on the beach where Rorke once again attacks them, first kicking Logan in the face and then Hesh. Rorke tells Logan he's good, and would have made a hell of a Ghost, but that's not going to happen. Rorke says there isn't going to be any Ghosts, he and Logan are going to destroy them together. He then drags Logan away as Hesh screams, ending the game.