As a retro RPG revival, Bravely Default 2 is faithful and full of heart, just like its predecessors. As a high definition 2021 video game, it sometimes falls short.

I’m a little torn on Bravely Default 2. On one hand, it’s a Japanese role playing game for true aficionados of the genre. Its combat is texturally rich, full of depth and wide-ranging battle options. It’s challenging - sometimes a little too much for its own good, in fact - but ultimately rewarding. In terms of how it plays, I generally rather love it.

The presentation, however, is where I get stuck. This is a game with gorgeous, painterly backgrounds that beckon you deeper into BD2’s medieval world… But then dead-eyed character models gesticulate their way through story scenes with repeated animations and I’m yanked right back out. At best, this is a little disappointing. At worst it offers up an unpleasant sort of artistic whiplash.

This isn’t necessarily an art style problem, but more a presentational problem. The art of the Bravely series was defined by legendary Japanese gaming artist Akihiko Yoshida, known for his work on certain Final Fantasy titles and Nier Automata, among others. He hasn’t contributed to this game, but his striking style is carried through in BD2’s art, which is from Hajime Onuma and Naoki Ikushima. Character portraits, the box art, and various concept artworks are quite something to look at - but the game itself often doesn’t really resemble them.

Back on the Nintendo 3DS, where this series had its genesis, this made more sense. That was a limited-power machine with a tiny screen. Just like how we bought a simplistic, pixelated clown as a character with dark gravitas in Final Fantasy 6, you’re supposed to suspend your disbelief. In Bravely Default and Bravely Second, it worked. Blow that style up to a more powerful machine and a high-definition display, however, and the result is uncanny. These dolls dead-stare their way through battles and cutscenes, and it doesn’t quite matter how good the music is (very), or the voiceover (strong), or the story (decent) - I found my suspension of disbelief, and interest in this story, strained. This is a shame, since as-written, the characters are frequently a story highlight. 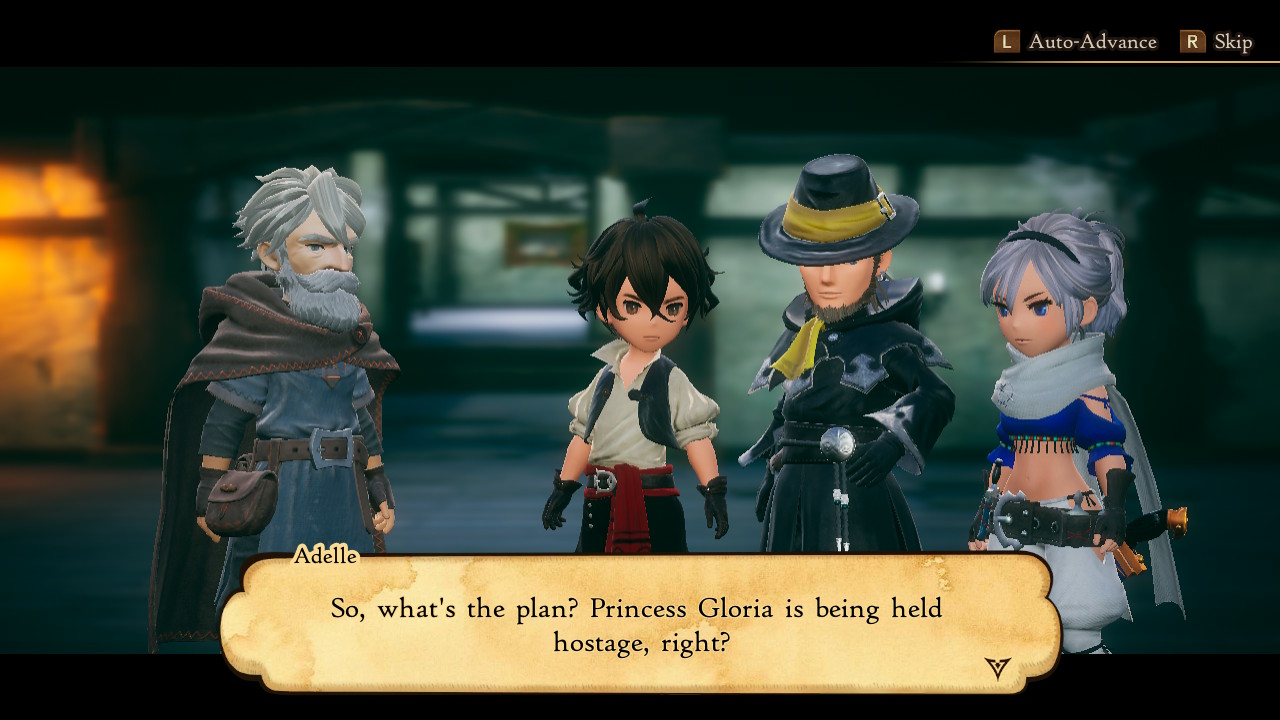 This isn’t about wanting top-quality graphics in a game, either. Square Enix’s Trials of Mana remake features a throwback style, but its characters are far more full of life. And Octopath Traveler, another Square Enix joint published in the West by Nintendo, is a masterclass of channeling the past in a thoroughly modern looking and feeling game. Bravely Default 2 ain’t that.

With these complaints noted, we move onto the game proper. Bravely Default 2 is a traditional turn-based RPG with a twist - and it’s from that twist that the series gets its name. To go ‘Brave’ in battle involves spending multiple turns at once, allowing you to attack multiple times in a row. To ‘Default’ is to save up a turn to spend later. These two systems interact - so it’s possible to Brave yourself into ‘negative credit’ of turns, in which case you’ll be forced to Default until you’re reset back to zero. Likewise, you can Default to save turns deliberately, all part of the greater strategy.

To give some basic examples of the implications of this, imagine using the Default command with your healer to save up turns so that when your party is truly injured, they can cast multiple restorative spells at once. Alternatively, imagine forcing your whole squad to be Brave and unload four turns each on a single character when they’re debuffed and in a vulnerable state. The whole combat system cascades out from this one mechanic. 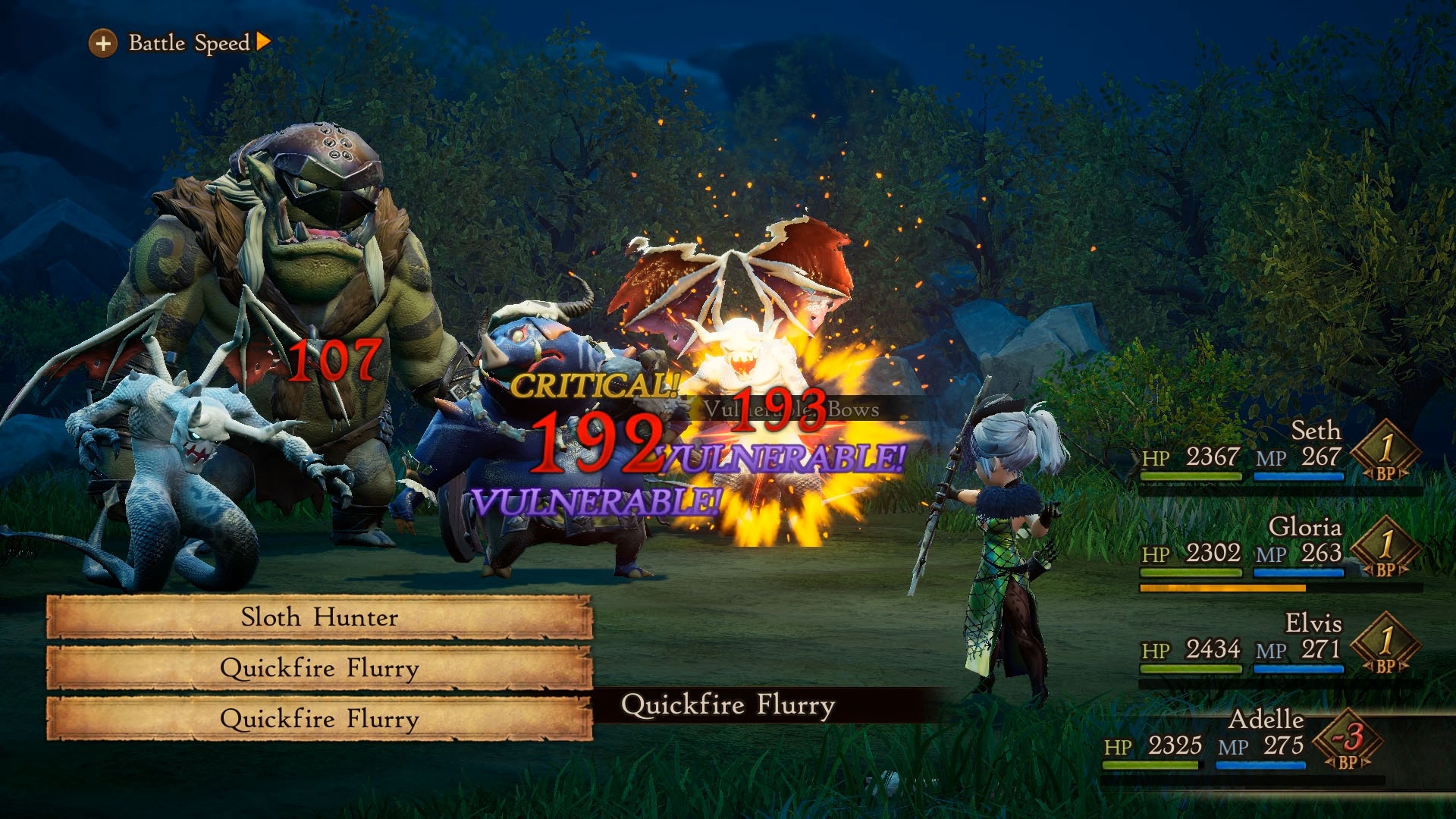 It’s a clever play on traditional turn-based battles. In fact, for my money, it’s as clever a diversion from the norm as the ‘Active Time Battle’ system that went on to define Final Fantasy. While the flow of battles is executed in a slightly different manner here to the previous two BD games, everything that made the combat in those games challenging and exciting is present here.

Equally important as combat is preparation. Bravely Default 2 has just as much depth here, with your party composition deeply changed by your choice of a job and subjob for each character. This determines your abilities, and there’s well over twenty different character jobs to choose from - though I won’t say exactly how many to avoid spoiling post-game surprise unlocks. There’s a variety of abilities attached to these jobs, many of which slot into RPG tropes like Vanguard, Dragoon, Monk, White, Black, and Red Mages - and so on. It’s excellent stuff.

Equipment is a heavy consideration here, too. Your choice of job doesn’t just impact your abilities, but also your stats. A Monk is more of a tank, for instance, able to both dish out and take more punishment. This also determines a character’s maximum carry weight, which in turn governs what can be equipped. Heavier armor and weapons weigh more - so there’s always a balance to be maintained.

Balance like this is at the center of Bravely Default 2’s play. Though paradoxically, it also doesn’t feel terribly balanced - it’s often very difficult early on, and though it eases up later, it frequently feels a little unfair. In dungeons - which sometimes drag on - it feels like the game wants you to engage in every combat encounter put in front of you - even though they’re easier to avoid than ever. Battles aren’t random here, but are represented on-screen with enemies you run into on the map. Doing so kicks off battle. Battles are exciting thanks to the excellent systems, though suffer the same visual deficiencies as story sequences. 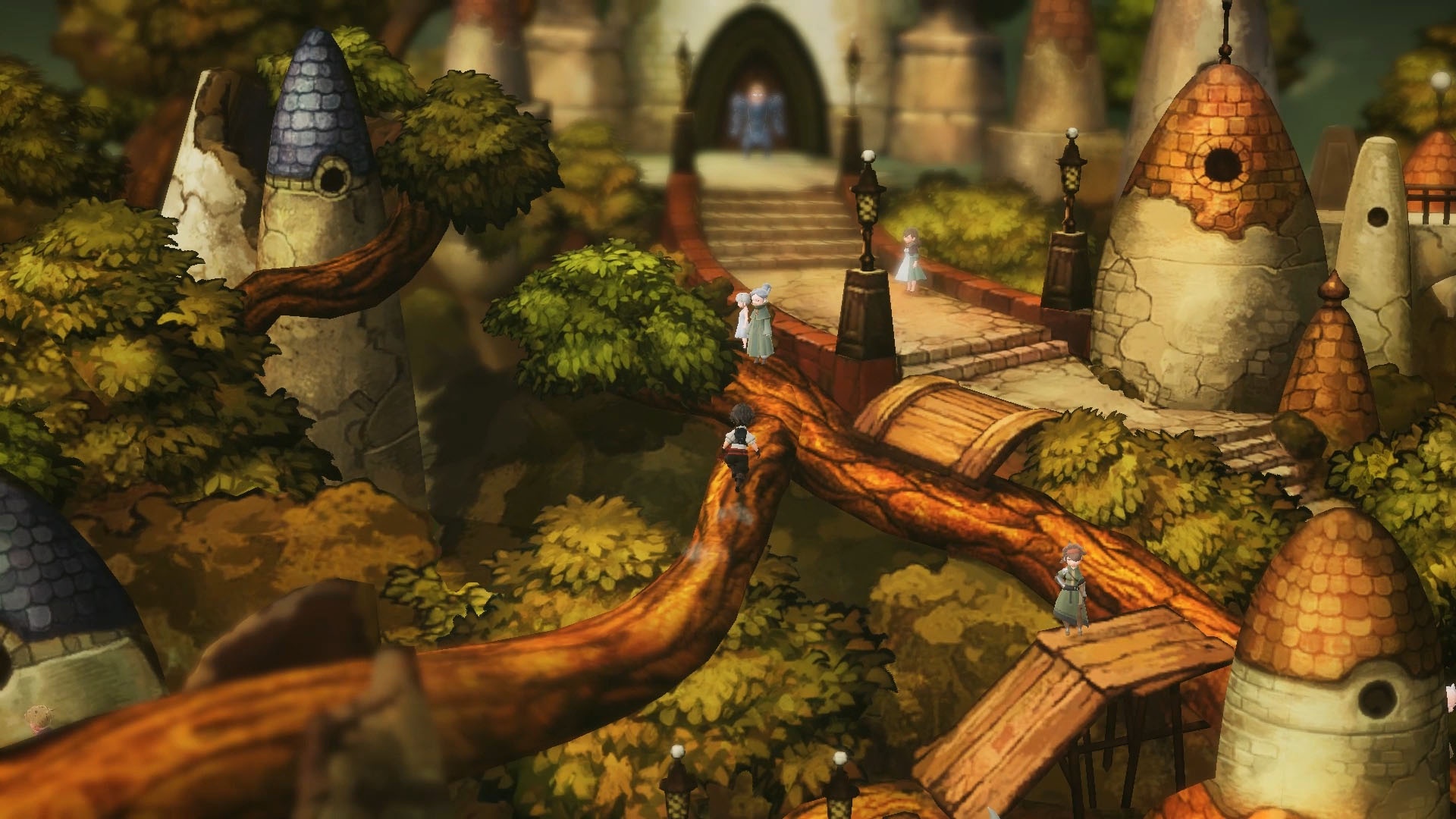 Bosses are so difficult that grinding in the dungeons that lead to them feels compulsory - but you’ll quickly reach a point where you’re so powerful that enemies on the dungeon overworld will flee from you in fear. Aha, you’ll think - this will mean I’m ready - if not overpowered - for the boss! Not so. The bosses are still brutal. I’m not sure what sort of difficulty curve the development team was shooting for, but even I, a hardcore JRPG nerd, began to get intermittently frustrated. It’s strange to think this game has been published by Nintendo, who often go too far in the other direction.

The disquieting inequity between the uncanny characters and the beautiful, painterly world they inhabit is also present in other areas, such as the game’s side quests. There’s over a hundred of them, but what you get is a bit of a random draw. Some are fully voice acted, and take you on interesting journeys that fill in new and worthwhile information about the characters of this world. Others are voiceover-free fetch quests that send you traipsing back and forth across the world for scant rewards. One is entirely worthwhile, while the other is undoubtedly padding, despite the game already being quite content rich in the main story. Like the difficulty difference between normal mobs and bosses, and the artistic split, this often feels like a game of two halves.

The presentational and balance problems ultimately don’t take too much from Bravely Default 2. There’s a brilliant game here, with heart, smarts, and an admirable adoration for the classics of the genre. Its charm cannot be denied - and it provides a helpful cushion against those uneven and rough edges. With that said, to embrace a cliché - this is absolutely one for fans of the genre, who want a difficult, system-driven RPG - and aren’t as worried about the visual presentation.