The latest Apex Legends narrative video, Stories from the Outlands, teases a wealth of content for Season 9 – including a new character, titans, and more besides.

In a surprisingly emotional new video catching up on the tragic backstory of Apex Legends' newest character, we're treated to a suite of new things due to land in the Apex Legends Season 9. If you've played Titanfall 2, you may recognize Viper as one of the primary antagonists from the game (and the guy that took BT's arm). It seems Respawn isn't shy about really connecting the dots between Apex Legends and Titanfall 2 at this point.

First and foremost, the 8-minute video introduces us to the incoming Legend – codename Valkyrie. "Bold, brash, fiery and fierce, Kairi Imahara grew up in the shadow of her father's legacy. But now she's ready to launch her own," reads a little blurb for the new character. Check out her video below.

Valkyrie’s abilities have been datamined, so these may not be the final specs, but this is roughly how she'll play:

The game will also be introducing a new weapon with the new Season in the form of the Bockek Bow: a powerful and deadly weapon (for those with the skill to wield it). "Capable of inflicting tremendous damage at medium range, you’ll need to make each shot count," says the description.

We're also going to see an infestation take over Olympus, though what exactly that entails remains to be seen. "An infestation has sprung loose, strangling the city with roots and natural growths," says a blurb – so expect it to inhibit movement somewhat.

As ever, we'll be getting a battle pass, and a Ranked mode will appear this season, too. You can read a bit more about those over at the official Apex Legends site.

The video also seems to suggest Rampart is the one responsible for bringing Titans to the game; if you look towards the end of the clip, you can see her working on a Titan into a big hangar of some kind. Will the machines come as Ults, or be included in a different way? Nothing has been confirmed yet, but we do know they are coming in Season 9, for sure – and the dataminers say the same thing. Either way, it's almost certain that those jets on Valk's back are from the Titan in the hangar.

Apex Legends Season 9 starts on May 4, as per a date shown at the end of the trailer. 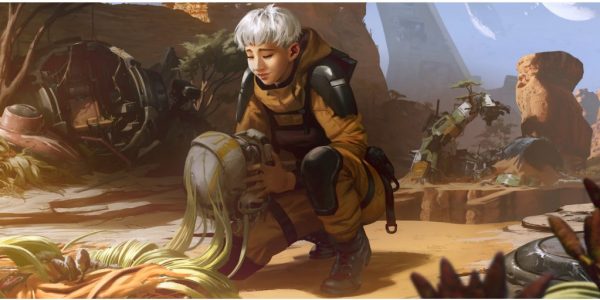