In Cyberpunk 2077’s dark future, everyone’s packing iron, so it’s up to you to bring the heat. Personal defence has been commodified to an extreme degree, with a colourful array of brands to build your arsenal from.

Here are some tips on how to make the most of your weapons through crafting and upgrading; our picks of Cyberpunk 2077’s best weapons throughout the early, mid, and late game; and the best iconic and legendary weapons in the game.

Cyberpunk 2077 Best Weapons for the early, mid, and late game

While there are a few powerful weapons you can find throughout Cyberpunk 2077 you can call the “best”, the ever-increasing DPS system as you level means that you’ll be swapping your loadout constantly throughout much of the early and mid game.

It’s not until Acts 2 and 3 where you’ll start to want to hold onto extra strong guns and melee weapons. 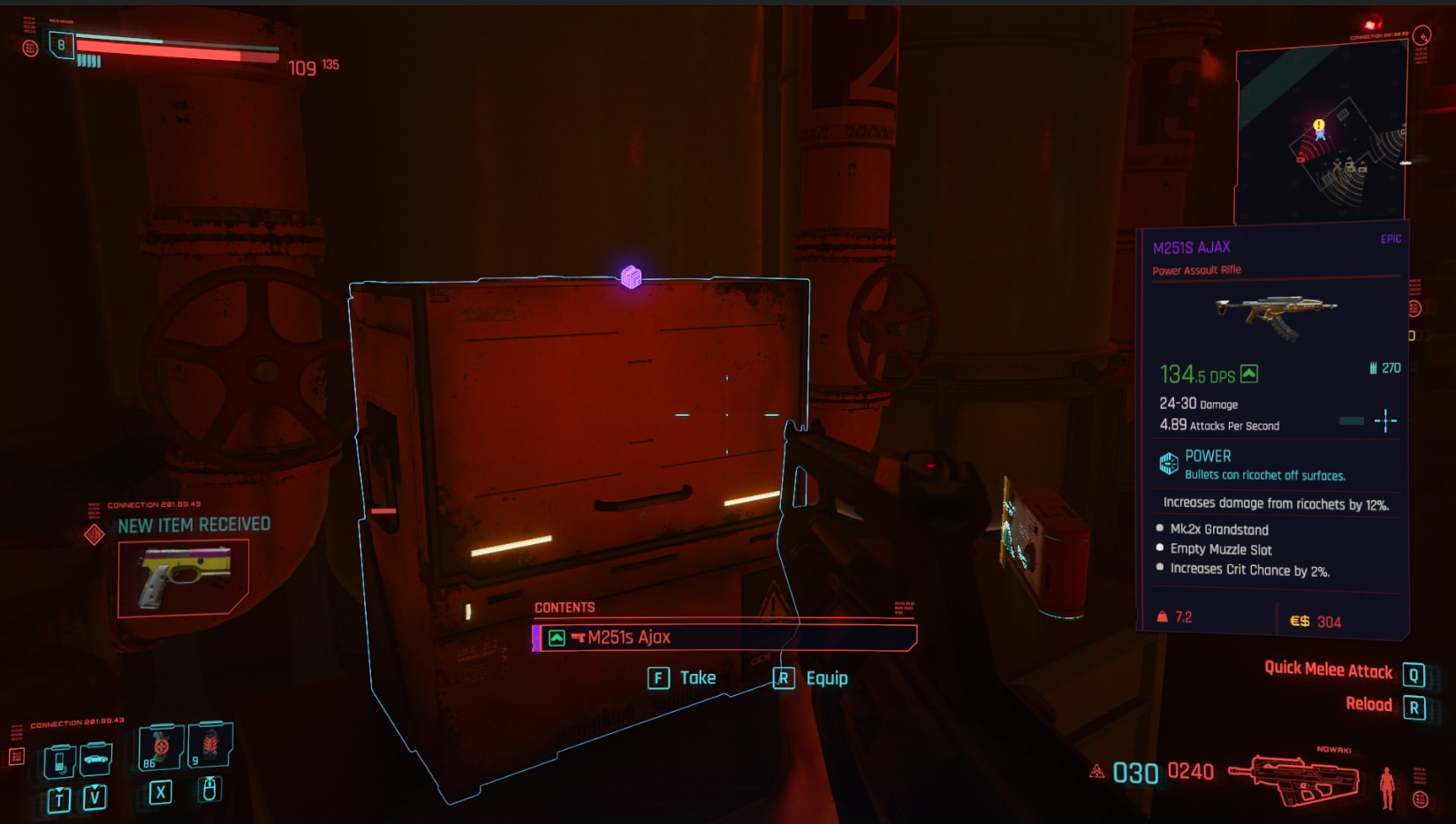 Generally you’ll want to gravitate towards whichever of the common weapons you have in your inventory has the highest DPS. This is also somewhat determined by your Attributes, as you’ll want to stick to shotguns with Body, and pistols, ARs, and blades with Reflexes.

A few of my favourite common weapons – which you find dropped after most fights – are: 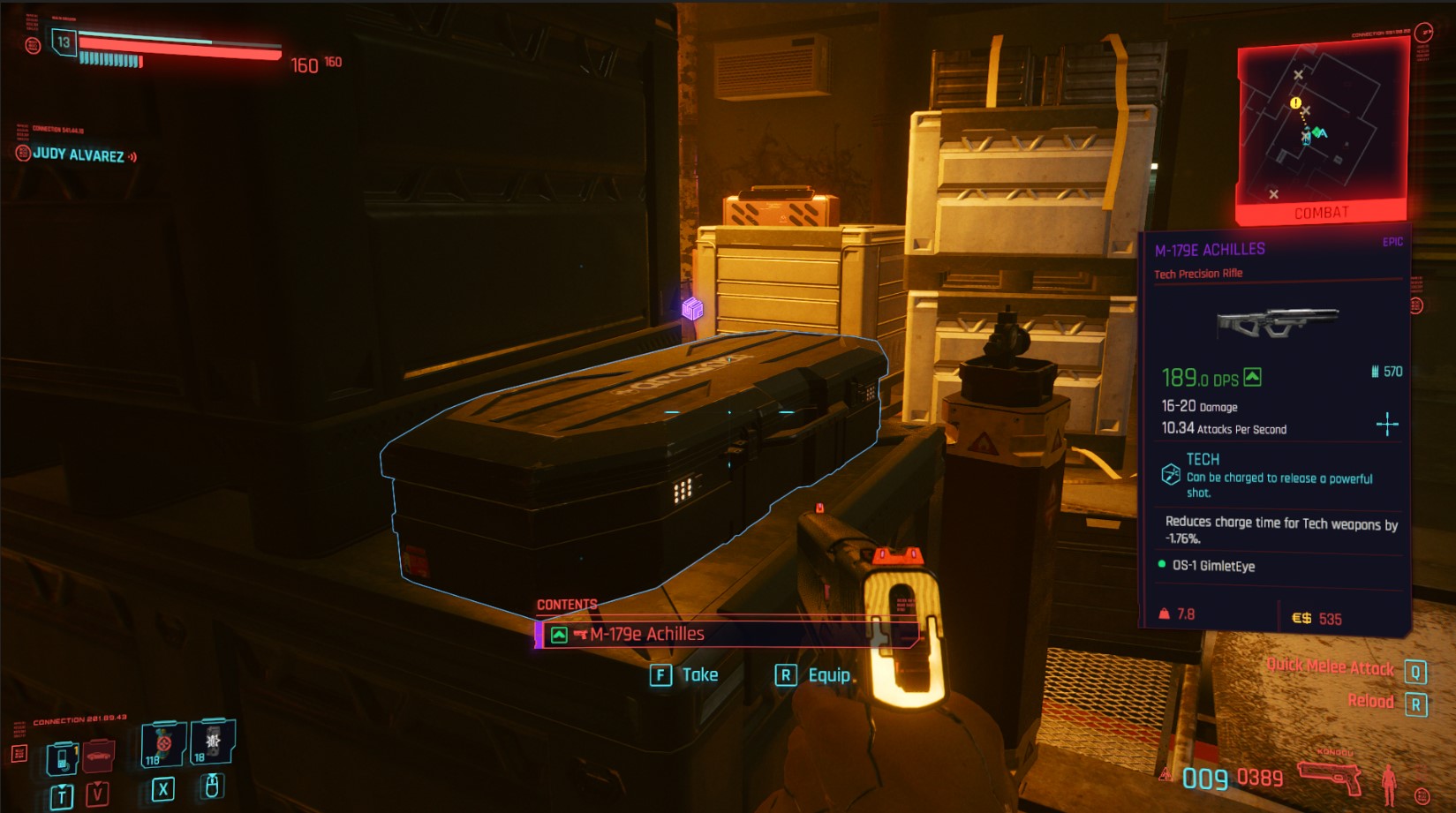 How to craft and upgrade weapons in Cyberpunk 2077

There’s an element of randomness to a weapon’s stats in Cyberpunk 2077, but thanks to the game’s crafting and upgrading systems, you’re not necessarily stuck with a weapon the way it is when you first pick it up.

(In fact, if you don’t mind a bit of save scumming, you can always save your game right before you pick up a weapon for the first time — since weapon stats are rolled when you acquire them — and keep on reloading until you’re happy. But since you can upgrade most of them anyway, it might make just as much sense to do something about those crappy stats in-story — and it’s probably a lot less boring that way too.)

V’s Technical Ability is your friend here, as is their Crafting skill tree. Levelling up gives V the ability to craft higher-spec blueprints, too. And while standard weapons can’t be customised beyond upgrading them, higher quality guns allow you to bolt on attachments and mods (or remove ones you don’t want) to suit your needs. 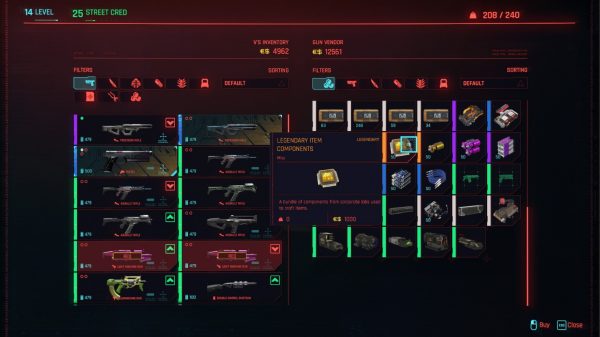 While we found that crafting from scratch can often be more trouble than just picking up weapons you find in the world (something that’s especially convenient to do if you’ve just separated a weapon from its former owner), upgrading an existing weapon usually calls for cheap and easily sourced components, and can help you build an arsenal that’s tailored to your preferred style of play.

While Cyberpunk 2077 includes its fair share of melee weapons, ranged firearms are a class unto themselves and, as such, merit a brief explainer.

There are three subclasses of guns in the game:

On top of conventional ordinance, you can also modify V’s body to be as strong a weapon as any using cyberware.

These are the Mantis Blades, Gorilla Arms, Monowire, and Projectile Launcher.

You need 20 Street Cred to purchase these weapons from a Ripperdoc, and once they’re equipped will act as a 4th weapon in addition to your usual 3 slots. 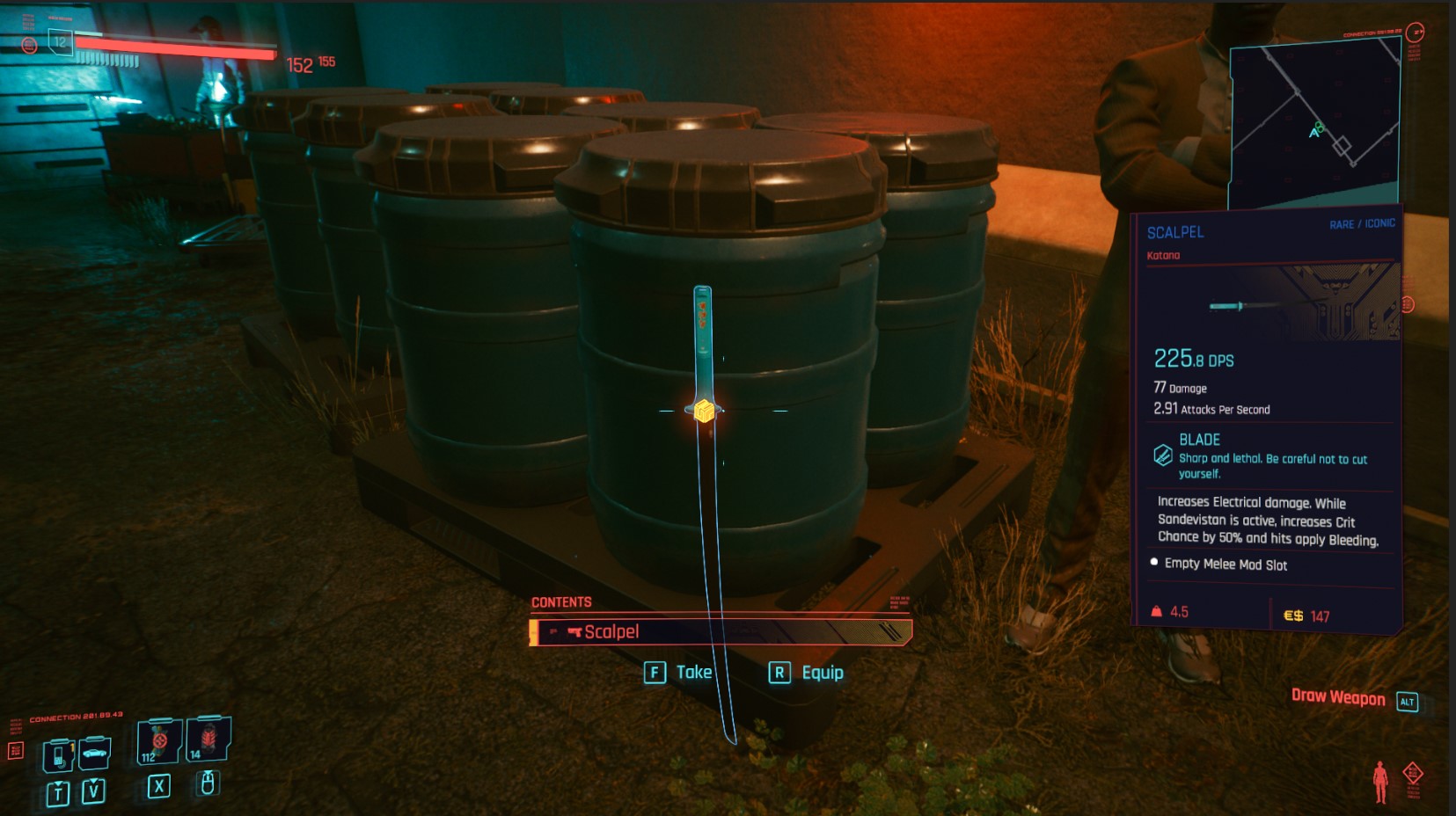 Each one of them are a great addition to your loadout, but which one you choose will depend on the type of character you’re playing.

For instance, if you’re running high reflexes, then the Mantis Blades are a perfect fit. Whereas a melee character with high Body is more suited to the Gorilla Arms.

Whatever you choose, know that it’s money well spent and you can go with whichever you think is the coolest.

Iconic Weapons in Cyberpunk 2077 are unique items with a special look and properties which set them apart from regular equipment.

They might be a particular character’s signature piece, or just a souped up version of a normal archetype.

Iconic weapons come in two forms: the weapons themselves, or crafting specs.

Iconic crafting specs have to be crafted from Item Components before you can use them – so boost your Crafting Skill and Technical Ability if you fancy wielding something a bit different.

Where to find Iconic Weapons

Many Iconic weapons are found throughout the main missions of Cyberpunk 2077, but are very easy to miss.

Some are dropped by bosses you fight, while others are hidden in the environment.

To find Iconic crafting specs, look on your map for skull markers of “Suspected Organised Crime Activity”. These are combat-focused world events where you get a chance at a good item for defeating a stronghold full of enemies.

They’re well worth doing, not just because of the Iconic crafting specs.

Below are a few of our favourite Iconic weapons in Cyberpunk 2077 and where to get them:

This Iconic pistol randomises its critical hit chance, damage type, and status effect after every reload. Meaning in addition to the damage, it has the potential to high-roll really hard and turn into a monster.

It’s dropped by Royce in the story mission, “The Pickup”.

Kongou is a quality burst-fire pistol that I used for a good while in my first playthrough, and definitely worth searching out. Its powerful two-round burst and electric damage make it useful in a wide variety of situations.

Without getting into spoiler territory, in the story mission “The Heist”, you break into someone’s bedroom with Jackie.

Before you go to the left-hand side of the room to get what you came for, go over to their bed on the right. On the bedside table, you’ll find Kongou. 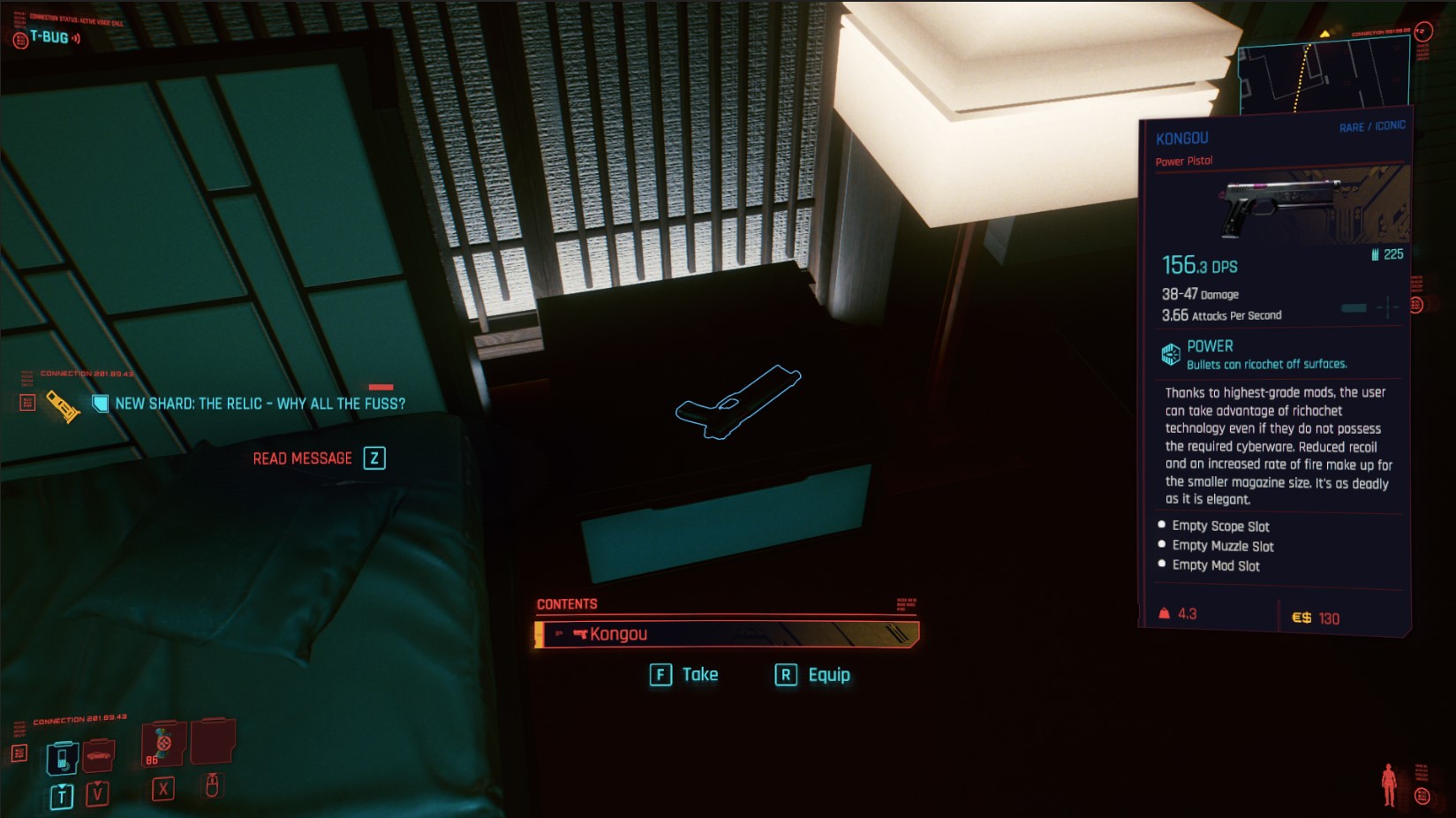 As mentioned above, the precision rifles in Cyberpunk 2077 are very strong. In the mid-game, none are better than Widowmaker.

When you help Panam Palmer settle her score with Nash, make sure you loot this incredible weapon off his body on the second floor of where you fight his Raffen gang. 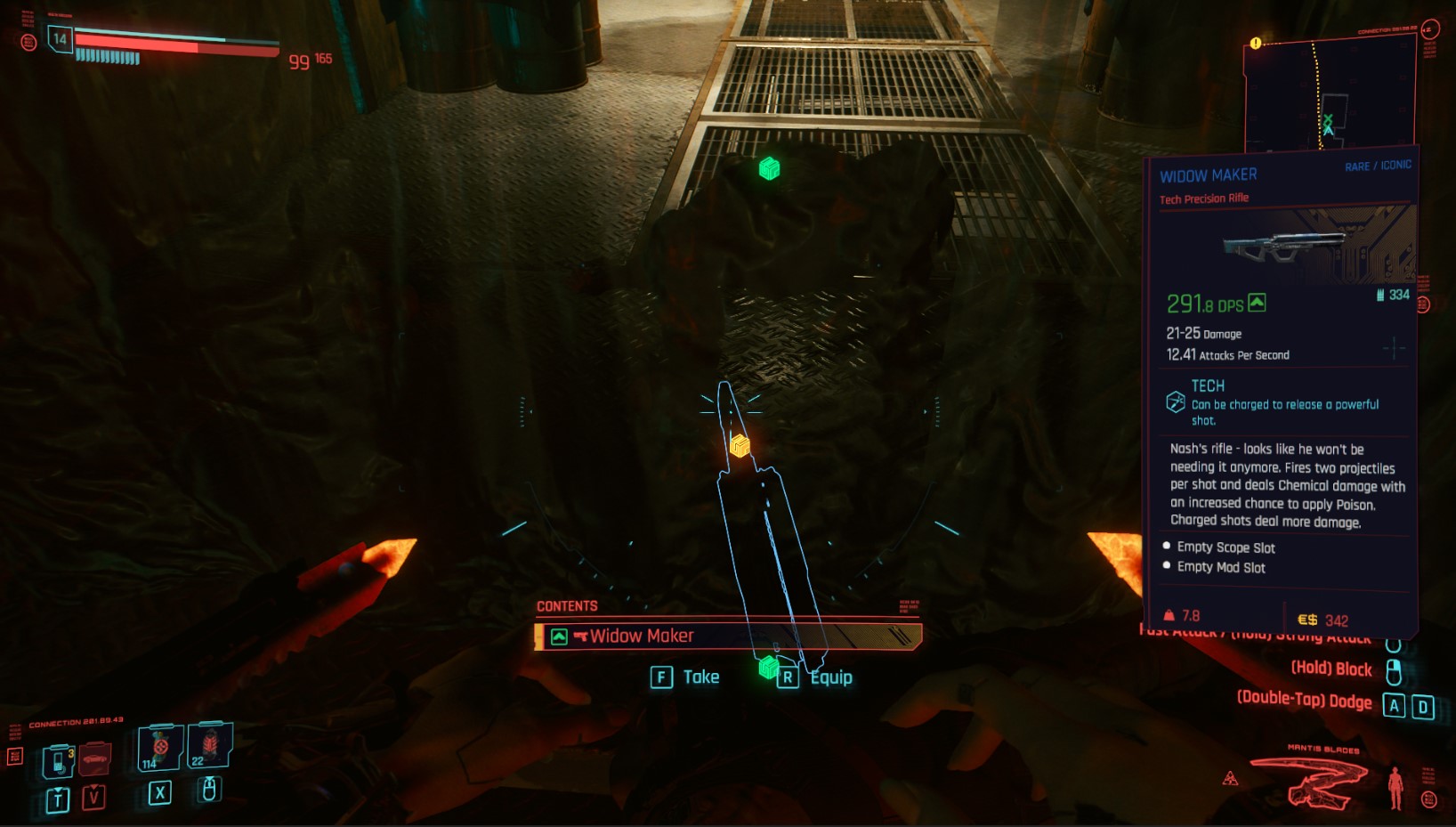 And a funny one for the melee players, this meme of a blunt club is more phallic than iconic.

During the early story mission The Pickup, make sure you call the Militech corpo, Meredith Stout, before you head inside with Jackie. 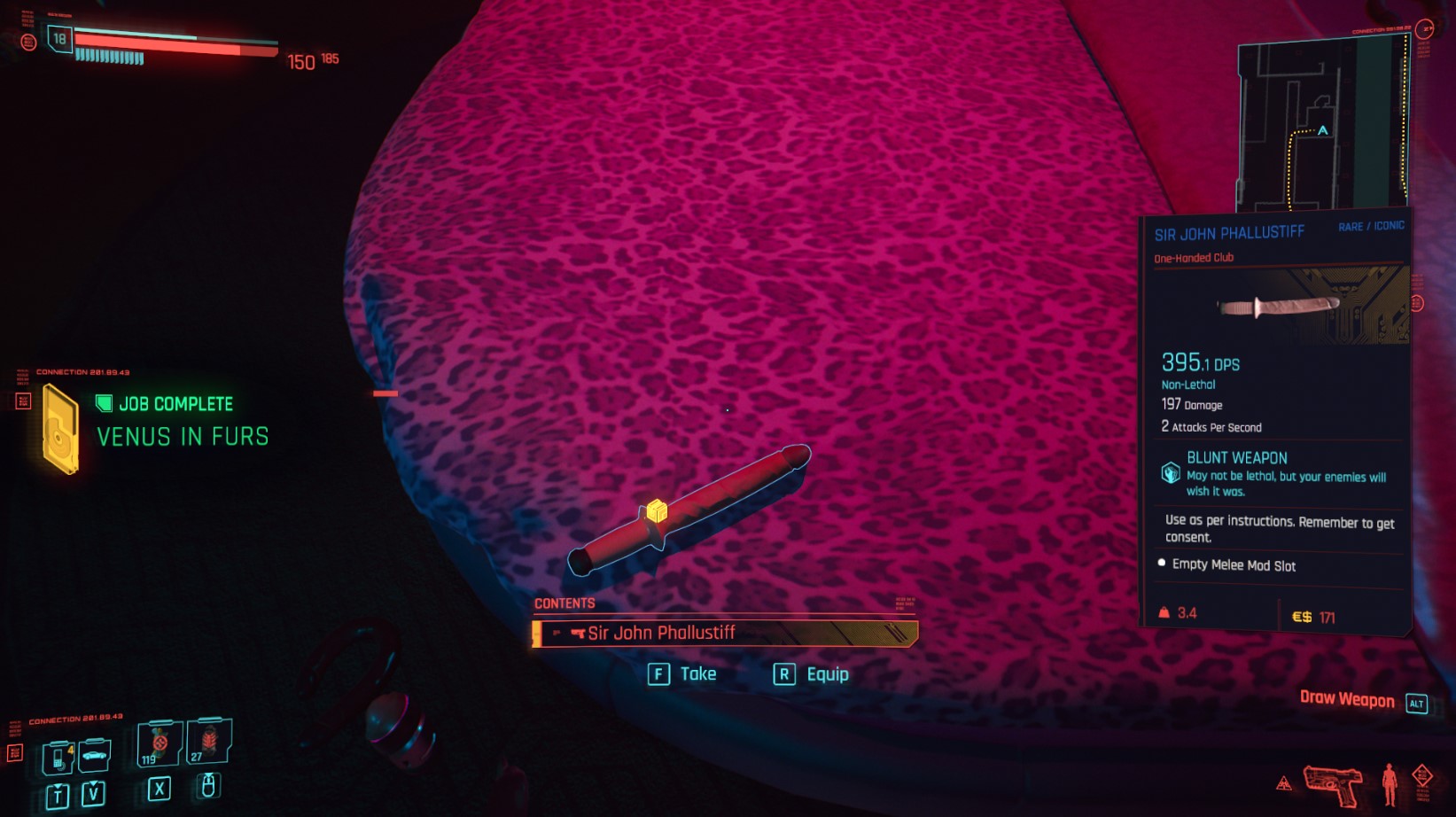 Strike a deal with her and go along with her plan.

At the end of the mission, hint that you’d like to spend some more “romantic” time with her, and later you’ll unlock a side job: “Venus in Furs”.

In the southeast of Night City, you’ll find the side quest “Stadium Love” in the Rancho Coronado district of Santo Domingo, just in front of the dam. 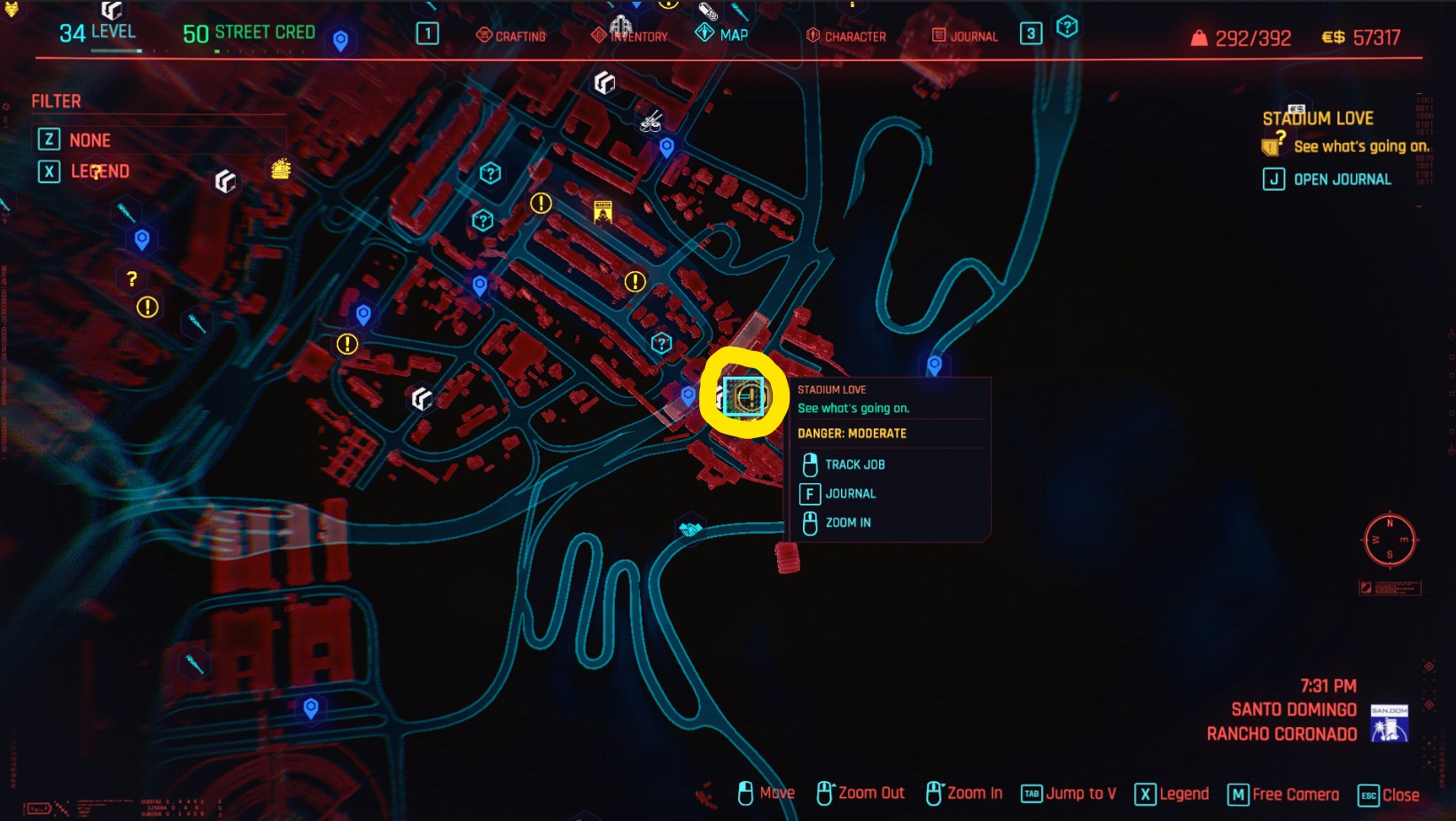 What you’re supposed to do is compete in a ridiculously hard shooting competition, win, and walk off with a unique gun as the prize.

However, if you just shoot up the place, you can pick up this incredible weapon – a smart submachine gun which poisons enemies – from the sign-in table. 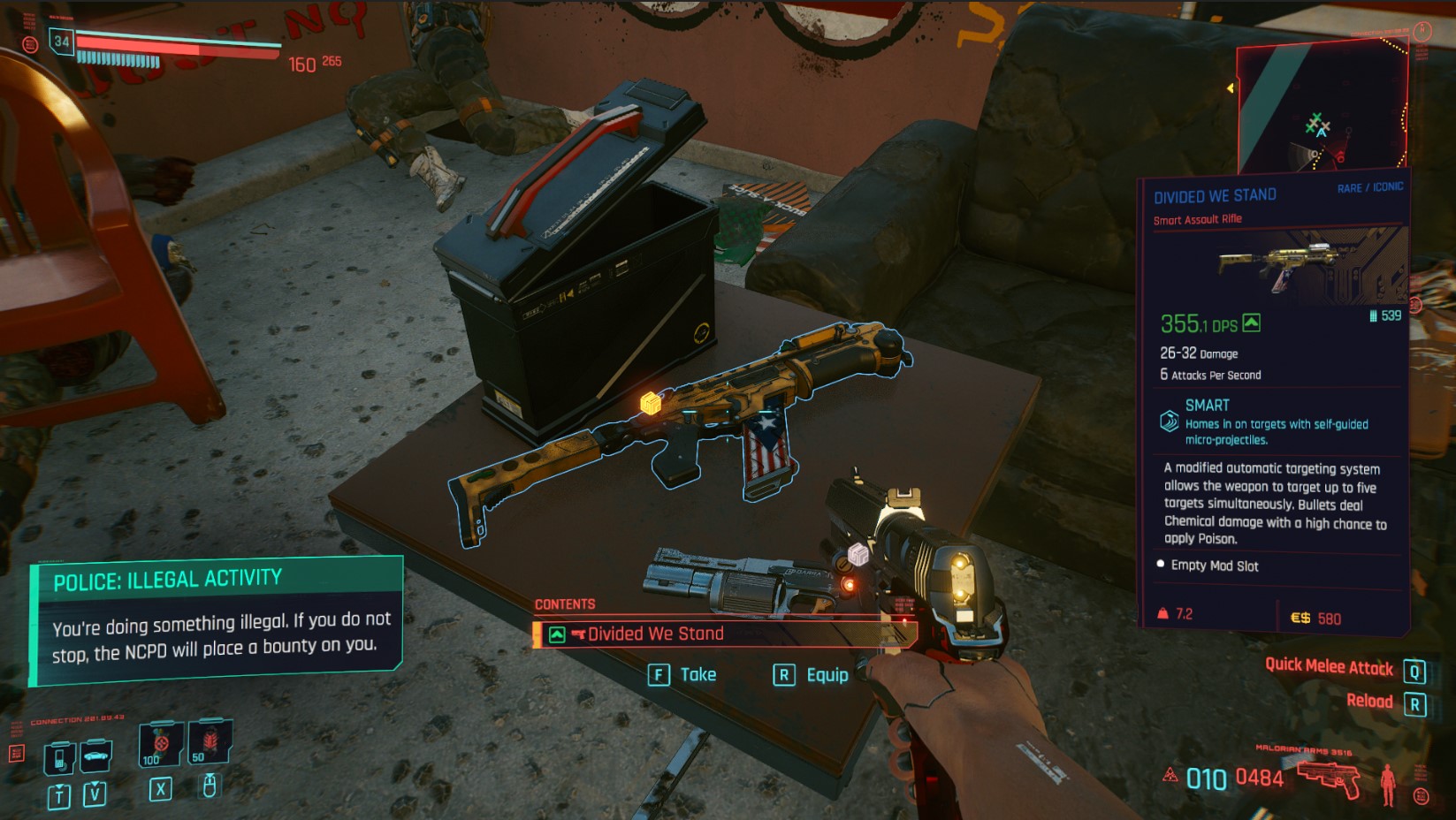 A similar, but non-smart, weapon can be obtained as part of the “Losing My Religion” side quest which is found on the northern docks of the Northside district of Watson. 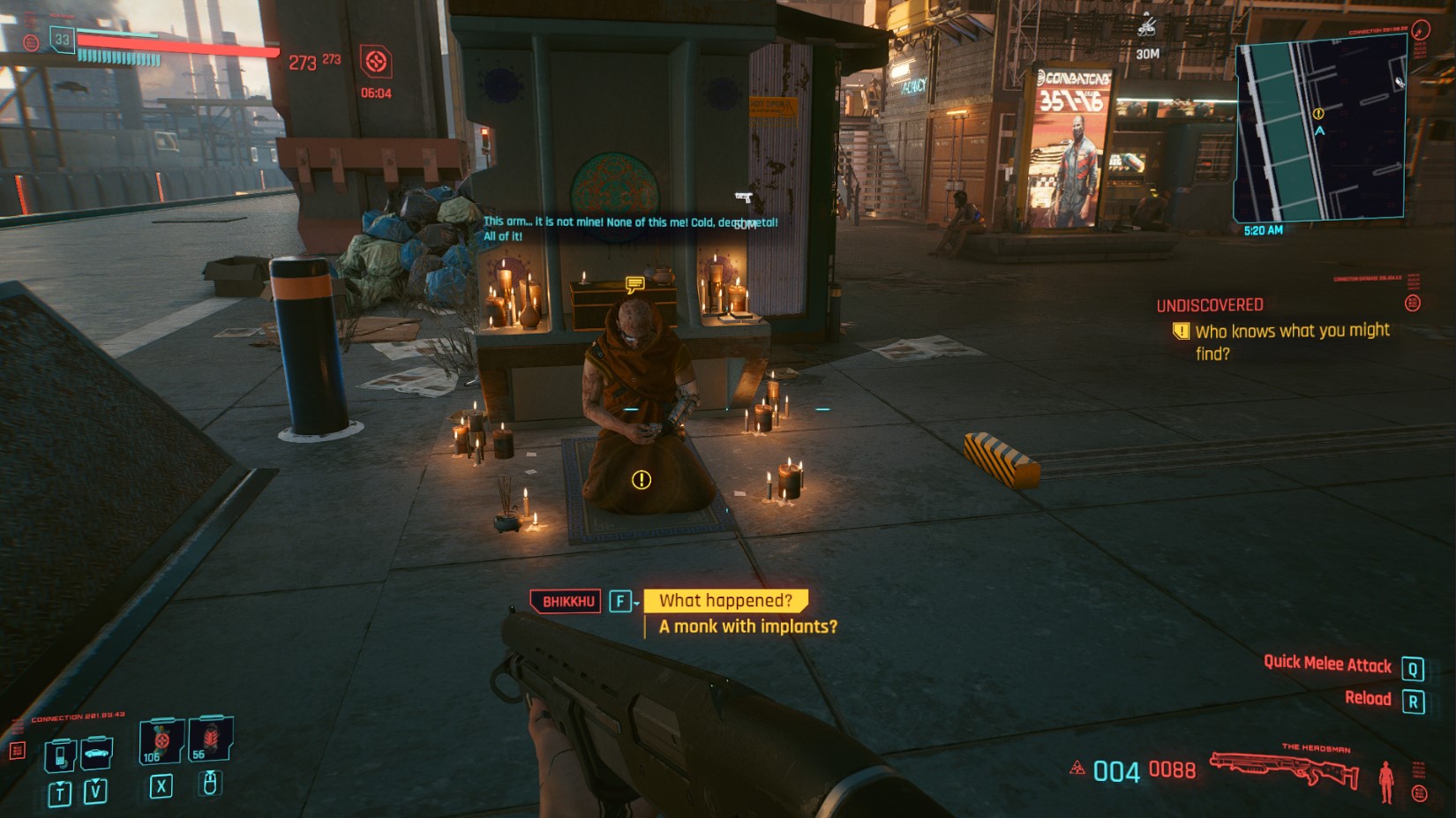 Talk to the Monk and agree to rescue his brother from Maelstrom gang members. You can take them all out non-lethally as he suggests if you wish, but either way, you’ll be able to make off with Fenrir – an awesome submachine gun that sets your enemies on fire. 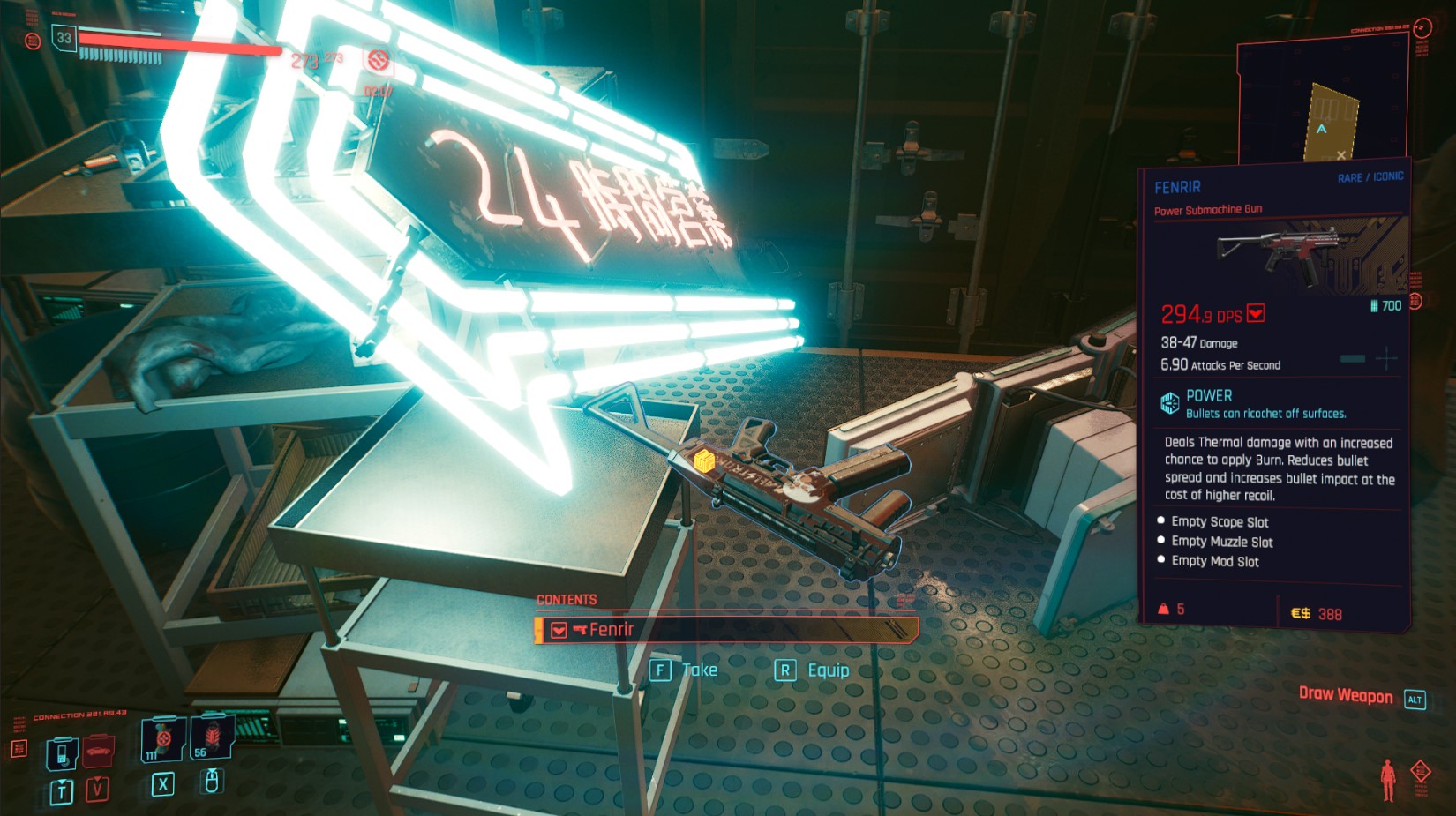 Some fun crafted Iconic weapons include:

Legendary Weapons are the rarest in Cyberpunk 2077, but not necessarily the best in terms of DPS.

What they do have are more mod slots and extra perks, so they’re definitely better than average. Plus, they have the added cache of being the best of the best. 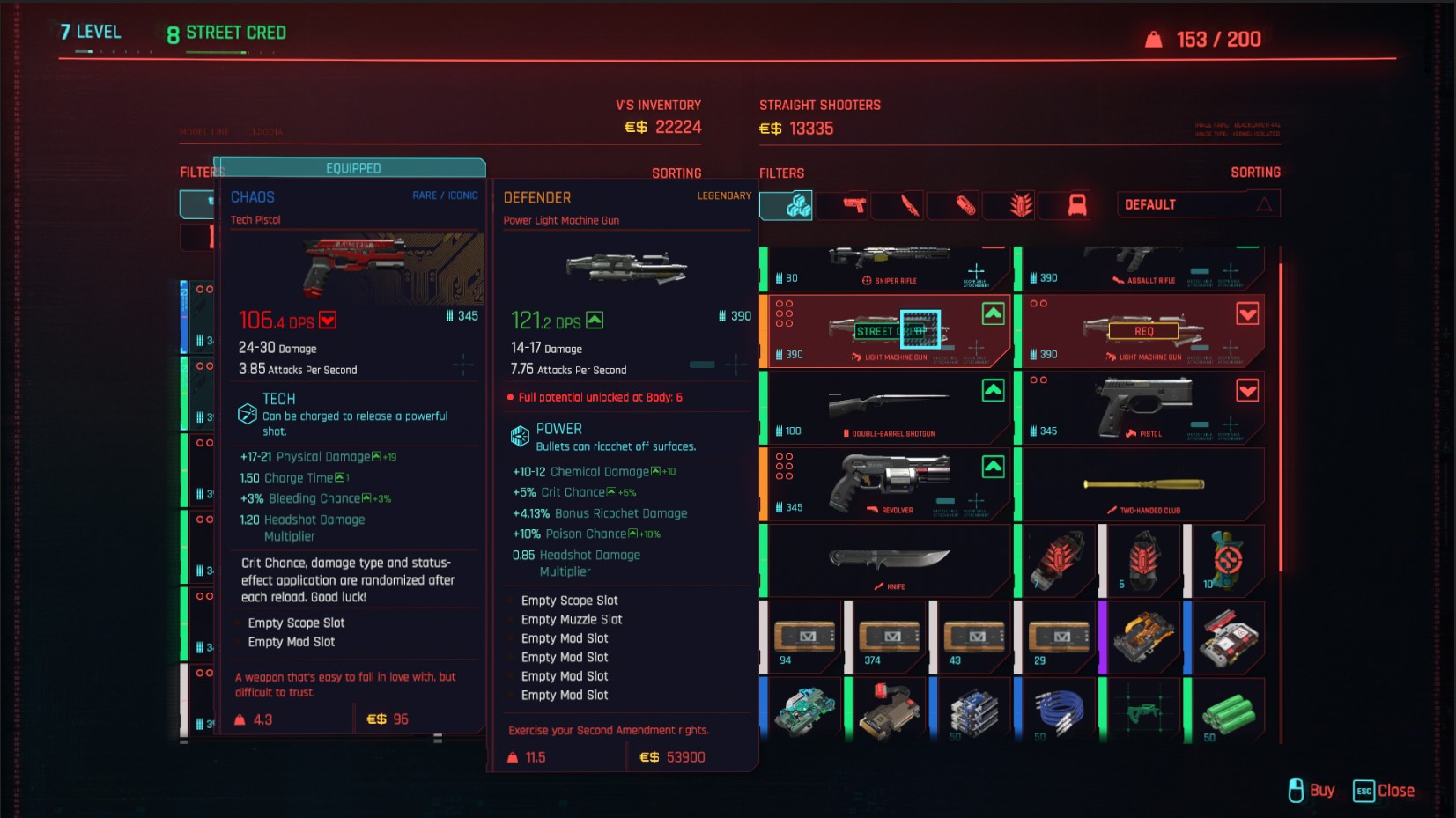 One way to get your hands on Legendary weapons is to craft them yourself by upgrading lower tiered Iconic weaponry and the crafting skill. However, this will take significant time and investment.

More practically, you’ll get a couple from the various bosses you encounter during Cyberpunk 2077’s main story.

While they can also be found as random drops, again most commonly in the Assault in Progress and Organised Crime Activity world events – so complete any you come across.

You can get Legendary versions of most regular guns, but they feel very similar.

How to get Johnny Silverhand’s Gun in Cyberpunk 2077

Not only is Johnny Silverhand’s pistol, the Malorian Arms 3516, one of the best weapons in Cyberpunk 2077, but it’s one of the coolest too.

You can grab it for yourself in Act 3 of the game, where you’ll eventually unlock a side job called “Chippin’ In” like his band Samurai’s famous hit. 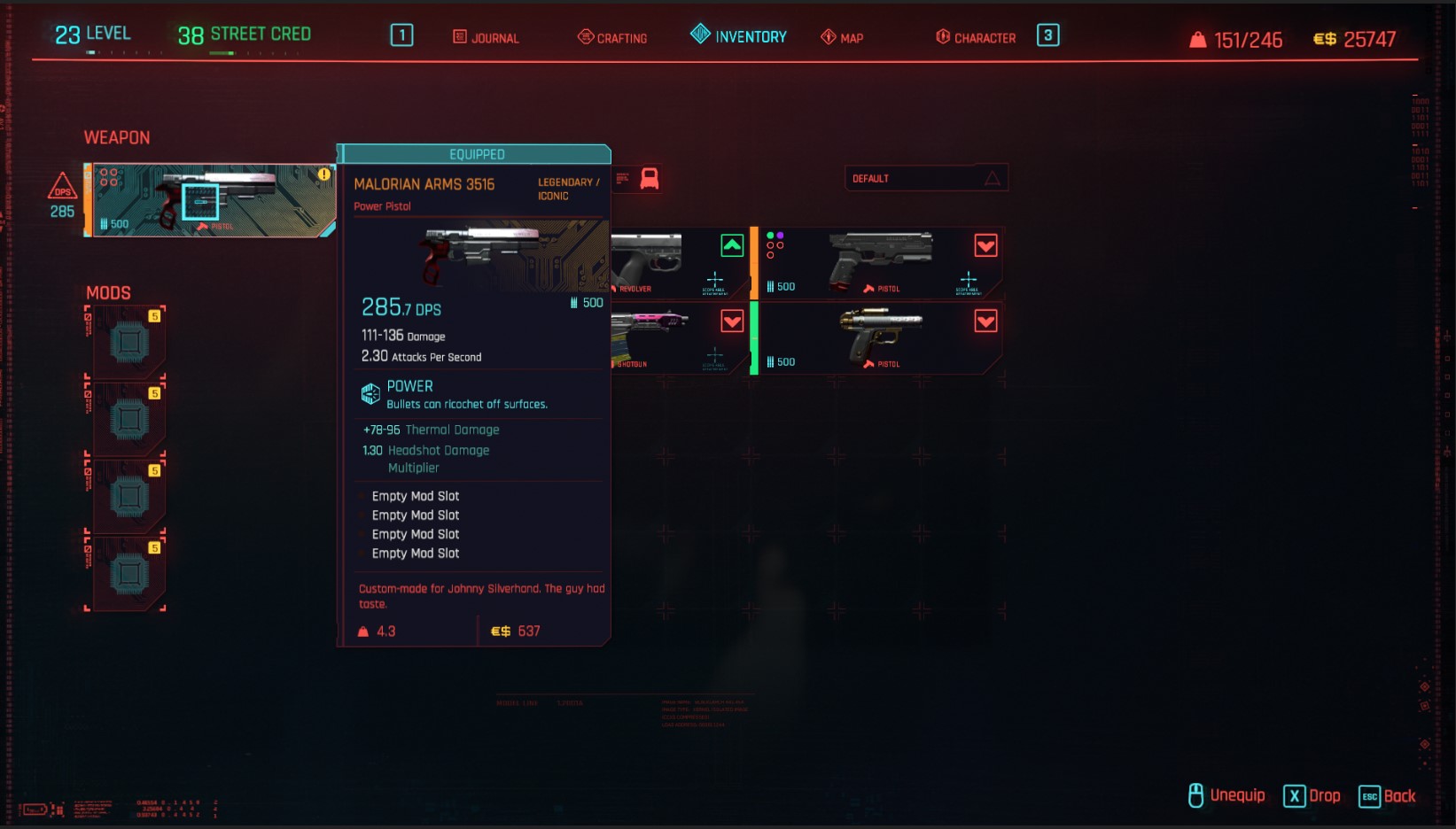 Again without dipping into spoilers, proceed with the quest objectives and you’ll eventually make it to a moored ship with a character you need to speak to.

The surrendering character will drop the Iconic pistol on the ground for you to collect.

(Of course, if you’re playing on PC and making use of console command cheats, you could choose to bypass the story and grant yourself access to Johnny’s iconic weapon much earlier in the game, if you wanted to…)

Best weapons and mods for a pacifist run of Cyberpunk 2077

If all this is starting to sound a bit too gory, there are technically a couple of in-game mods that allow you to play Cyberpunk 2077 as a pacifist of sorts. The Pax weapon mod and the Target Analysis cyberware mod for V’s Ocular System both allow for non-lethal combat — Pax can be applied to any customisable gun and applies per weapon, while Target Analysis will turn all your weapons non-lethal.

The good news is that playing Cyberpunk 2077 with non-lethal weapons and cyberware enabled won’t diminish the damage you’re dealing — your enemies will still be dispatched, they just won’t die.

The downside to this is that non-lethal in this context absolutely does not mean non-violent, and in fact for all intents and purposes those downed enemies are all still dead — inasmuch as they’re left battered and bleeding on the floor just as if you’d killed them, and V won’t be seeing them again either way. 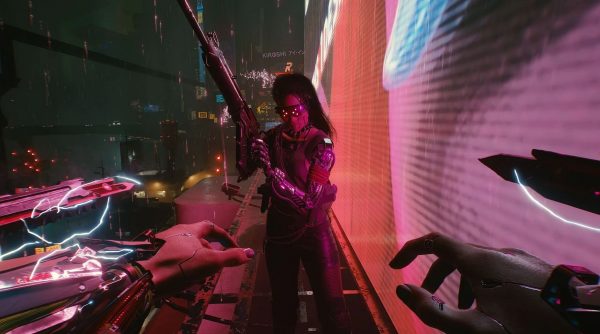 Even if you’re not going for a no-kill run, these mods can come in handy, as a few quest givers will specifically request you deal with their targets in a non-lethal fashion. On the other hand, from what we’ve seen the game isn’t always great at remembering you’re using these mods, so maybe expect to see your non-fatally downed enemies listed among your kills regardless of your best intentions.

If you’re keen to learn more about customising weapons, check out our Cyberpunk 2077 weapon crafting guide.

Or if the in-game mods aren’t giving you the flexibility you want to play Cyberpunk 2077 your way, check out our page on the Best mods for Cyberpunk 2077 on PC.