As Sony and Microsoft walked cagily around each other, playing a big game of chicken when it came to announcing the prices of their next-gen juggernauts, Nintendo sat in the background raking it in.

As per the latest NPD report, consumers in the US have spent $3.3 billion on video game hardware, software, and accessories in August 2020 – and that has resulted in some major wins for Nintendo.

Most notably, the Japanese publisher and platform holder has seen its best August ever in terms of hardware sales. 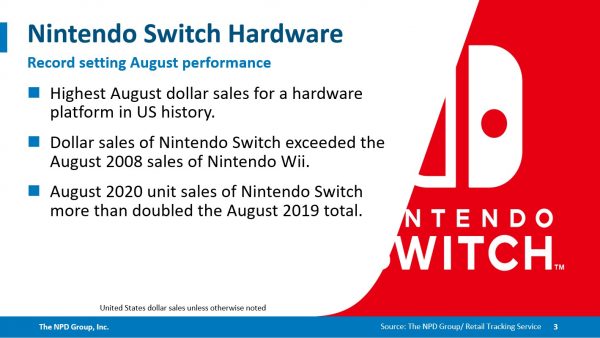 The previous August hardware revenue record was set by the Wii in 2008 and as per NPD analyst Mat Piscatella, Nintendo bested that last month. He also notes that Nintendo managed to double the number of Switch consoles sold compared to the same time period last year. The Nintendo Switch sold better than any other hardware platform in August.

The good news for Nintendo doesn’t end there, either: the company also managed to sew up the software market between August 2 and August 29 with a massive 10 out of 20 of the top games belonging to the company.

When you consider the market is currently booming, that’s no mean feat. 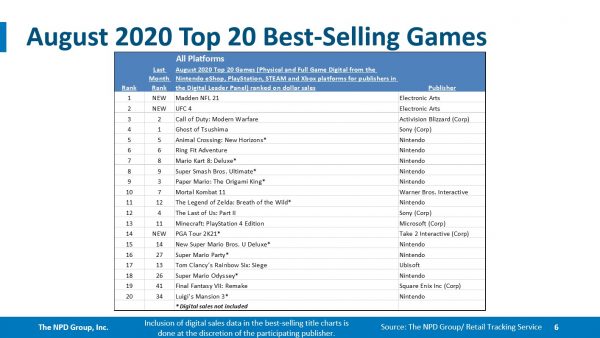 “Year-to-date spending reached $29.4 billion, 23% higher than the same period in 2019. Content, hardware, and accessory spending each increased by more than 20% when compared to the same period a year ago.”

It looks like the pandemic and lockdowns around the world are continuing to improve business for platform holders and publishers.

Let’s just see if this momentum can hold until the launch of the upcoming Xbox and PlayStation hardware, and whether or not Nintendo can hold onto its advantage in this thriving industry.