The Marvel’s Avengers beta offers up an extremely generous amount of content, but it’s still not yet enough to leave me convinced about this big-budget adventure.

Picture the scene: you’re in a restaurant, and you’ve just ordered the most expensive thing on the menu. Let’s say it’s Wagyu Beef, which can run into the hundreds of dollars. Off your order goes to the kitchen and it comes back, cooked with care and attention and yet… it’s wrong. Something is off. Is it the seasoning? Is it too well-done? This is an expensive thing, presented to you with skill and care – and yet something about it isn’t quite right.

This might appear a strange tangent, but bear with me: that steak is Avengers, the new game from Marvel and Square Enix, developed by Tomb Raider reboot crew Crystal Dynamics with assistance from Deus Ex reboot alumni Eidos Montreal. That’s a pretty good pedigree, right? In video game terms these teams with this amount of money are basically Michelin Star chefs. So why isn’t it clicking?

Marvel’s Avengers is beautiful, expansive and, yes, expensive. Just looking at this game it’s immediately clear that this is a banner title for Square Enix, and it oozes budget and ambition at every turn. When you tear through an enemy base as heroes, the cartoon sensation of smashing up a super-villain’s base is here in full force, satisfying thanks to the level of detail. Aim up at the wall with Kamala Khan, aka Ms. Marvel, and the wall will be beautifully dented with the impact of her oversized, super-powered fist. Details like this make you feel powerful.

And yet at the same time… you don’t feel powerful, because so much of your time is spent smashing low-tier grunts. Why does it take three hits of Thor’s hammer to down some body-armored schmuck with a gun? Why is Hulk endangered by a man in a hazmat suit? The answer, of course, is that it’s a video game, dummy, and you need to be able to be downed for a sense of challenge. But in Avengers, the power fantasy is sapped by these things, creating a sharp reminder of why the most successful heroes in video games are more vulnerable characters like Batman and Spider-Man.

This is the challenge and the paradox of Avengers. It’s awesome-looking. Those who complained about the MCU-but-not-quite designs of the core heroes be damned; they look great in action. It’s also, at a base level, pretty fun – brainless, accessible button mashing with a decent veneer of complexity thanks to the unique aspects of each character and special moves you can choose to trigger. But beneath that, I’m still unconvinced. 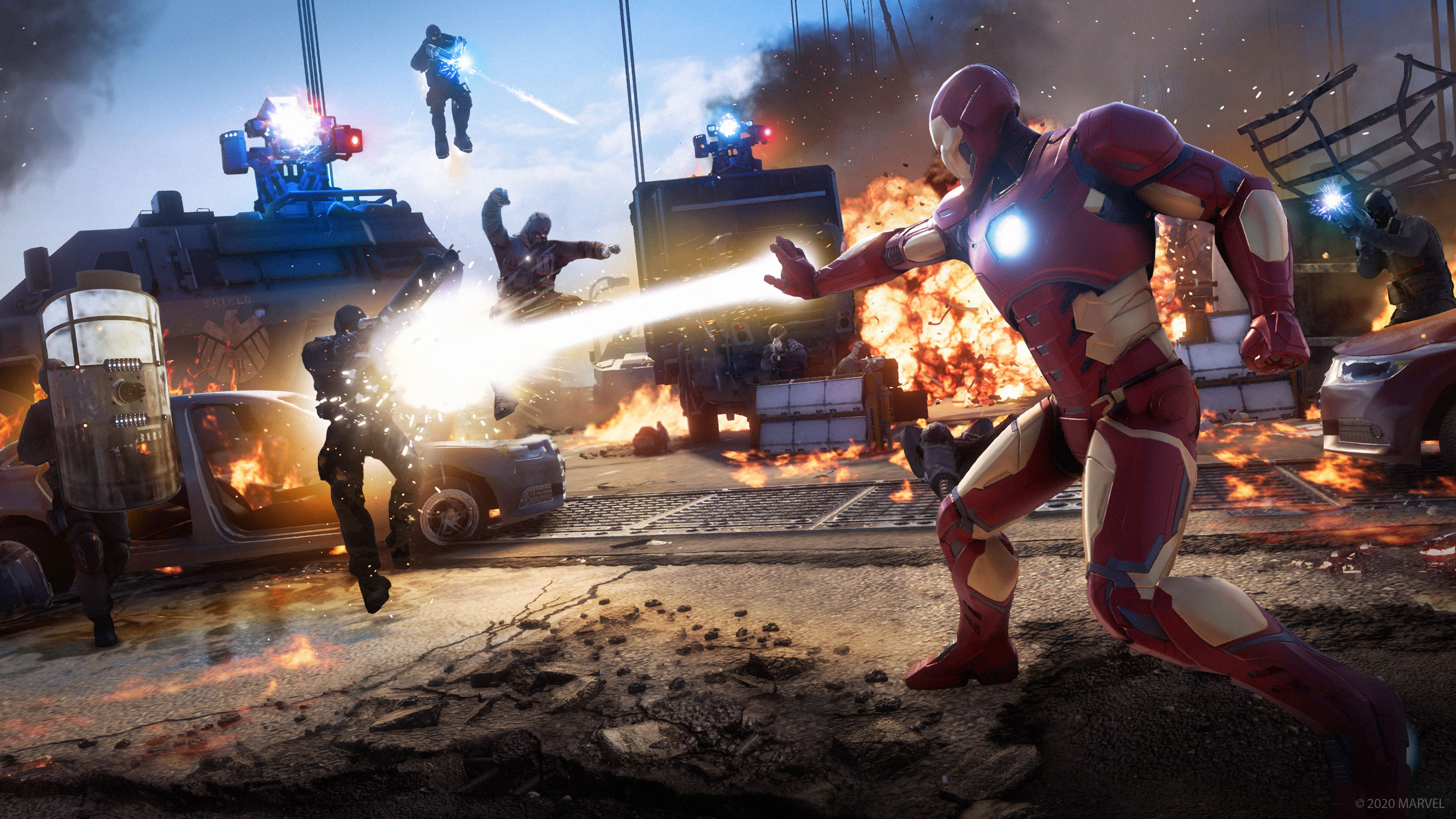 Some things just feel like design elements at odds. Take equipment, for instance. Square Enix says Avengers isn’t a role-playing game (they call it an epic third-person action-adventure game), but it has RPG-style gear and skill progression. The skills seem well-rounded and designed to allow you to spec a more specific fighting style for any given hero, but the gear falls flat. Yeah, you can equip Iron Man with new repulsors, but it’s not very exciting because it has no visual impact; character appearance is tied instead to skins. The skins are great, ranging from recolors to deep-cut comic references – but it sucks the air our of the excitement of gear, as you’re literally just watching numbers get bigger.

In moments, however, Avengers is astonishing: the big-budget Marvel game of your dreams. In all too many other moments, however, it seems to lack direction and a soul. There’s a whole lot of money and man-hours on the screen in any given frame, but too often I was just mashing buttons, not really feeling anything. It shouldn’t be like that if you are Iron Man. You should feel bad-ass. All too often I don’t.

Dedicated readers of VG247 might find that steak analogy at the top of the article familiar, by the way. That’s because I’ve used it before, about another service game which also clearly studied Destiny and other similar action-adventure-RPG-multiplayer games – Anthem. As with Avengers, in the run-up to that game’s release I yo-yoed back and forth: some elements of it were absolutely incredible (indeed, Avengers’ Iron Man could learn a little from how Anthem’s flying freelancer mechs control), and sometimes the game genuinely wowed – but at the same time, it seemed like a game that was running the risk of being less than the sum of its parts. As we zeroed in on release, it felt like Anthem could go either way, and we all know which way it went.

This feels harsh to say because a great deal of care and attention has clearly gone into Avengers – but so far it just isn’t working for me as much more than brain-off button mashing and visual fancy. Which is fine; one thing this game has that Anthem didn’t is a killer license attached, and maybe this little rollercoaster will be more than enough for that audience. But a game like this also demands that you’re willing to pump tens or hundreds of hours into it over a long time, sticking with it as its content pool grows and expands post-launch. Nothing of Avengers I’ve played so far suggests I’d be particularly over-eager to stick around beyond enjoying its narrative.

So, like Anthem pre-launch, Marvel’s Avengers feels like it could go either way. This is a game that truly might click and be held together on the strength of its solo missions, or its post-game multiplayer raid content, or something else we’re yet to see. For now, however, the beta has left me feeling the same way as the last few hands-on opportunities: sometimes intrigued, sometimes wowed… but almost always unsure. I hope the final product sticks the landing.