It’s been nearly a year since Borderlands 3 made its debut and Gearbox wants to celebrate.

During this time, you can expect six weeks of mini-events along with the celebration of Borderlands 3’s first birthday.

A fresh mini-event will be activated every Thursday from July 30 through September 10.

The theme and specifics for each mini-event will shared on the Borderlands website and social channels each week.

Here’s what else to expect:

Participating in these free mini-events is free and you can also enjoy the celebratory benefits of these events while playing Bounty of Blood and the other campaign add-ons included in the Season Pass. 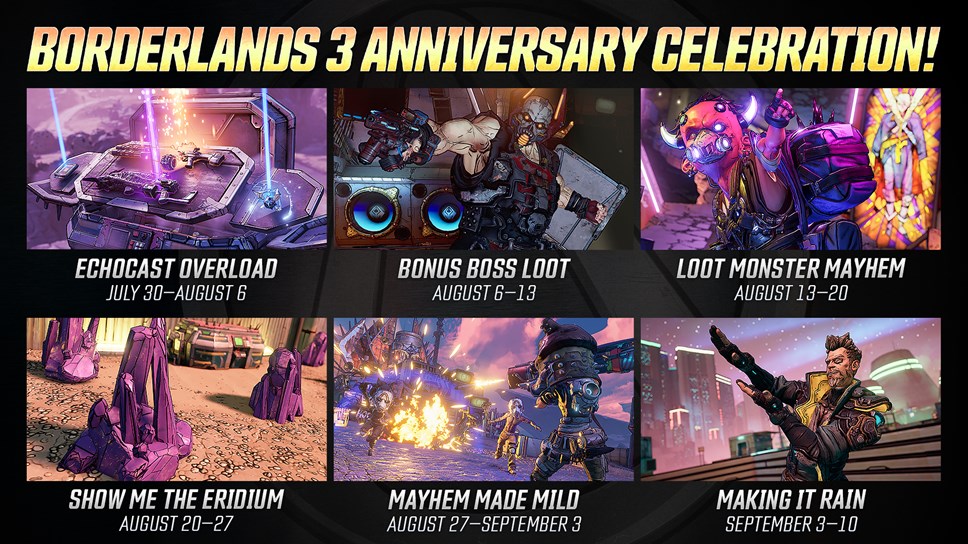 Vault Hunters can now spend Eridium at the Veteran Rewards vending machine located on Sanctuary III to obtain rare mission rewards that, in some cases, could previously only be obtained once per playthrough.

You can also invest your Eridium into the Eridian Fabricator 2.0, an update to the gun that shoots guns. Its new alternate firing mode requires quite a bit of Eridium, but it also guarantees the Fabricator will provide a Legendary weapon.

Boss loot pools have now been spread across more Boss enemies, making it easier to earn the exact Legendary you want. To learn more about the update, hit up the latest blog post.