If you’re looking for a PS4 Black Friday deal, now is generally the best time to buy expensive electronics. This year, Sony is upping the ante with a few great PS4 bundles to encourage shoppers to part with their hard-earned money.

This year, the Only on PlayStation bundle is one of the best deals you can get for a PS4 Slim, and it comes with some very good games to boot.

The Only on PlayStation Bundle comes with a 1TB PlayStation 4 Slim, which alone usually retails for $299.99. On top of that straight $100 discount on the console, you’ll also get three free PlayStation exclusive titles in the bundle. The Last of Us Remastered, Horizon Zero Dawn: Complete Edition, and God of War are all highly rated games, and for someone who hasn’t had a PlayStation console, the three are essential grabs. With this bundle, you get them practically for free!

The best part about the bundle? This deal is offered by Sony themselves, so most retailers will have this in stock. If you miss out on grabbing it on Amazon, Walmart or Best Buy may still have copies! However, this particular bundle is likely to sell out quickly, as it makes a great introduction to the PS4, and is also a great gift. So it’s best not to hesitate if you want this one. 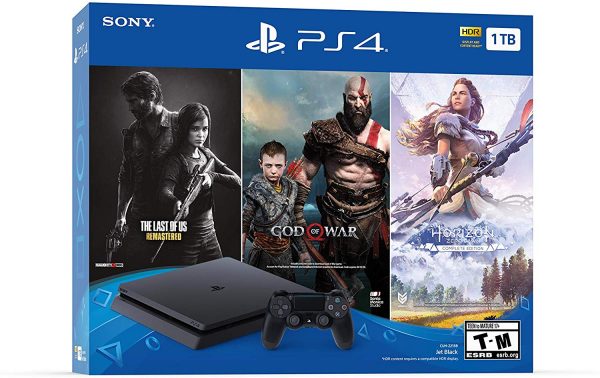 You can grab the Only on PlayStation Bundle for Black Friday at the below retailers:

Looking for a PS4 Pro instead? The more powerful console is on offer as well! You can get a PS4 Pro with Call of Duty Modern Warfare for $299.99!

If you’re hoping to grab a PSVR, the PSVR Multi-game Bundle for $199.99 comes with five great games, a PS Camera, and the PSVR at a budget price. You’ll need to find your own PS Move controllers, though! If you don’t want to bead with that, the PSVR Blood & Truth + Everybody’s Golf Bundle for $249.99 gets you only two games but includes the Move controllers.

Want to browse all the PS4 deals? Our PS4 Black Friday deals hub has all the best PS4 console, game, and accessory deals so you can save the most money this week. If you’re looking for deals on other consoles, the Xbox One Black Friday and Nintendo Switch Black Friday deal hubs will guide you to the best deals.