The Battlefield series goes back to the beach in its latest update, War in The Pacific. Dropping for free on Thursday, October 31, it features two new maps set in the Pacific theatre of World War 2 – you can read our preview here.

Between 1941 and 1945, U.S. and Japanese forces clashed for supremacy of two unassuming land masses that, due to their enviable positions, were the ideal locations for airfields and forward operating bases. Whoever controlled Iwo Jima and the Marshall Islands controlled the world.

In Battlefield 5, War in The Pacific is a map pack of contrasts. Oil-guzzling tanks rampage through unspoiled undergrowth. Blood-curdling screams echo across tranquil skies. Splashes of red stain white sand beaches. Compared to October 3’s Operation Underground stage, which plunged players into the subway tunnels of a war-torn German city, this is a markedly different prospect. For Battlefield 5 producer Lars Gustavsson, however, whom I spoke to alongside design director Alan Kertz, it feels like going home.

“Who could resist?” asks Gustavsson. “It has been there from the first prototype of Battlefield, which was Wake Island in the Pacific. If I pick one moment in time where I saw that Battlefield would be great, then it was on Wake Island when I was going up in the plane and banking over, and I saw the ships, and I saw the planes, and the explosions, and the tanks, and everything.”

Before 2002’s Battlefield 1942, which Gustavsson also produced, military shooters were largely characterized by grim environments. Colour came at a premium in the likes of Return to Castle Wolfenstein and Medal of Honor. In a stark counterpoint to the Euro-centric shooters of the day, often taking place in abandoned villages and underground laboratories, Battlefield took players on holiday. Guadalcanal, Midway Atoll, and the Philippines were a far cry from poky German bunkers and musty French wine vaults. Open spaces and bright colours were front and centre of Battlefield early on, and rather than undermine the fierce FPS skirmishes, they served as a respite.

The pair of maps here are homages more than remakes, capturing the spirit of the original’s Pacific locale while maintaining Battlefield 5’s chaotic energy. “What we’re not trying to do,” Kertz tells me, “is turn the game from one pacing to another. It’s about taking the pacing that we have and building on it, and providing that opportunity to make a choice as a player. Do I want to go into the caves and be point blank at flamethrowers and SMGs? Or am I going to hang back a little bit and try some flanking routes with some boats?” Battlefield’s open map design has always encouraged you to make your own decisions, giving you the scope to choose your own role in combat, and it’s the same here. 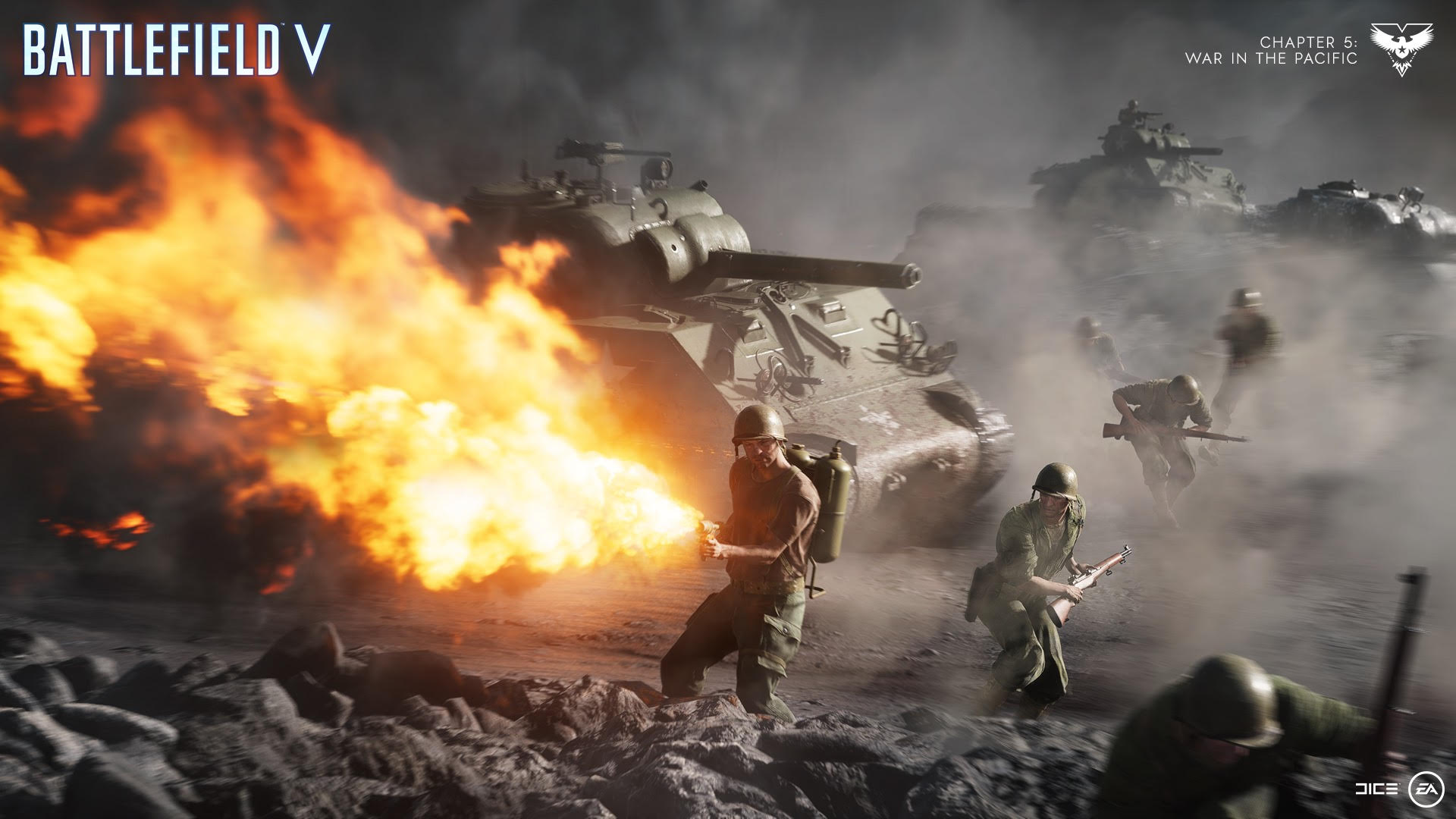 Pacific Storm, for instance, is crisscrossed with waterways, giving boats a distinct mobility advantage. You’ll appreciate the addition of speedy dinghys – if you can avoid the disastrous effects even a single machine gun spray can have on it, that is. Ample foliage also makes it easier to sneak around scoring stealth kills with a katana. This is even more effective when a dynamic monsoon envelops the map in a rainstorm heavy enough to drown out the death cries.

Iwo Jima, on the other hand, lends itself to a hellacious beach invasion. It starts at sea, with players launching boats and planes from hulking carriers, and spills onto a dark, glossy shore, where black volcanic rock gives the attackers just enough cover from entrenched defenders operating fixed gun emplacements. If they’re successful, the attackers then move up and attempt to claim the base at the top of Mount Suribachi which, by then, is absolutely swarming with defenders fighting tooth and nail for every last inch of ground. It’s tied with Call of Duty WW2 for gaming’s best beachfront landing.

“The chills that I still get from jumping onto the landing craft full of other soldiers and landing it on a beach under fire…I still don’t think that any any other game out there captures it with the same feeling, the emotion, and the kind of immersiveness that we really are able to achieve,” Kertz says. Unlike Call of Duty WW2’s thrilling D-Day scene, which is a cinematic but ultimately inert set-piece, in Battlefield 5, the person driving the boat is real. The machine gunner is real. The people hunkered down next to you are real. And, as you’re painfully aware, the bullets constantly whizzing past your ear are coming from real people trying to kill you. If just a few of those bullets find their mark, then it’s game over. Until you respawn, at least. 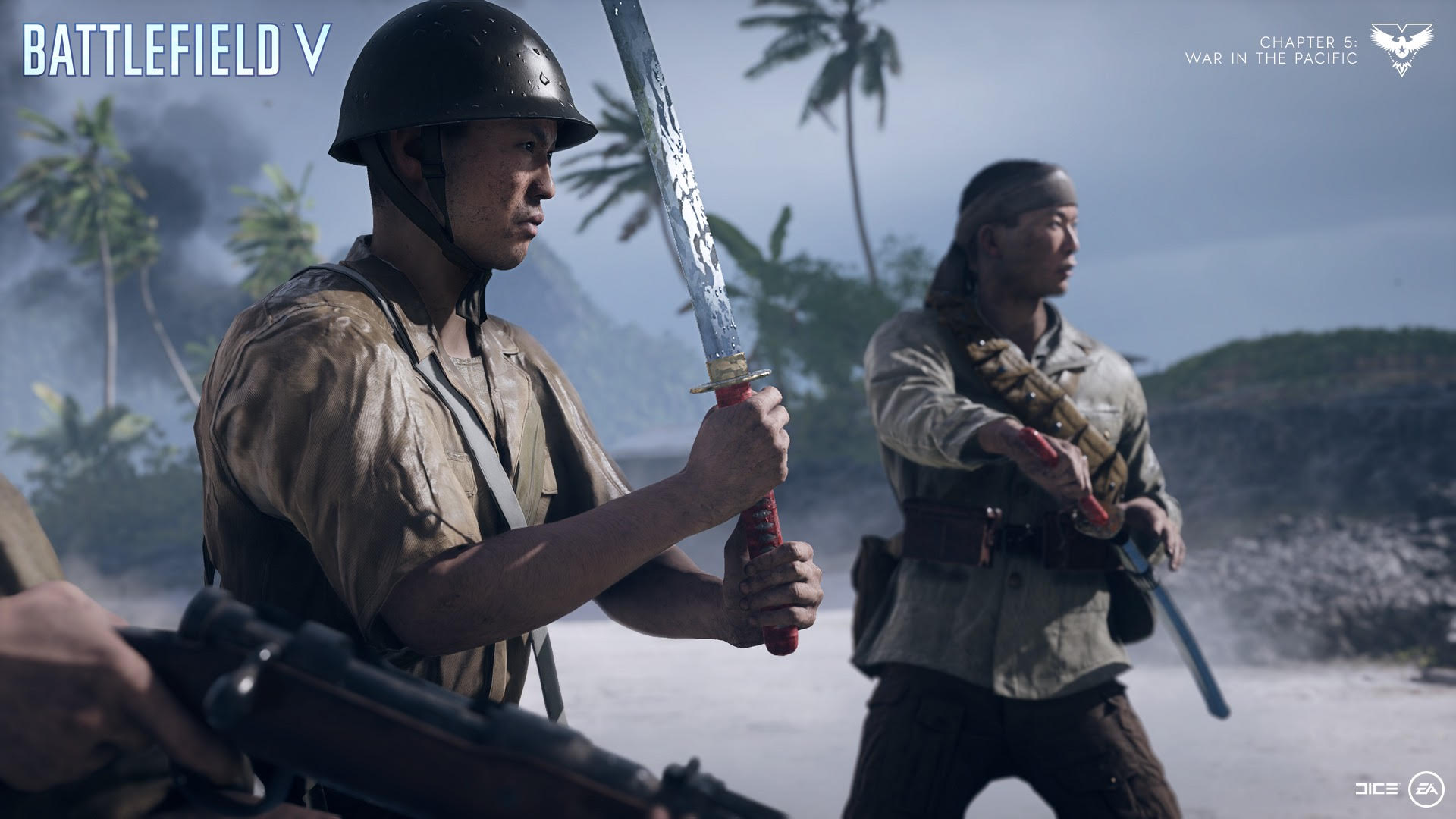 The open maps lend themselves to these emergent moments. As satisfying as the close-quarters fighting of Into the Underground is, you’ll get double the anecdotes from War in the Pacific in half the time. Gustavsson tells of one “classical battlefield moment” that happened to him during playtesting. “I used that lunge mine they had in [the trailer] and blew up a Sherman tank, and the explosion tossed me backwards. When I landed on my back, there was the Japanese jeep that came flying just above my head, and I would have been dead unless the explosion had pushed me over.” Gustavsson expresses regret at not having captured the moment to watch later, but what’s great about Battlefield 5 is that another moment like it is never far away.

Despite the bombast, these environments truly convince as real places. To make the most authentic interpretation of the Pacific War yet – at least from a visual perspective – DICE went on location to harvest research materials. That location wasn’t Iwo Jima or the Marshall Islands, though. They’re pretty hard to get to. Instead, DICE visited Hawaii, which is along the same bearing, give or take 1,220km.

As is customary, the Swedish studio gave America’s archipelago state the photogrammetry treatment, just as it did with Battlefield 1 and both Star Wars Battlefronts. It flew drones to scan the terrain from all angles, from the density of its vegetation to the composition of its rocks. Researchers also laid down a tarp and placed on top of it plants, stones, and other flora the drone might have overlooked, before taking the material back to base where developers were on hand to refine their 3D models and load them into the game.

Due to its beauty and variety, Hawaii has proven popular with location scouts. Sometimes, a little too popular. Kertz tells me of one unexpected dilemma he encountered during development. “There’s a funny story of a rock out there that, like, four different games have gone to the same place and scanned. So it’s in a Battlefield game, and it was in a Battlefront game. And it was in a Need for Speed speed game, because we all went out and ended up scanning the same rock!” First prize to anyone who manages to identify this rock in-game.

The realism isn’t merely skin-deep. DICE developers visited a gun range to record the map pack’s new weapons for sound and animation purposes. One of those weapons is the iconic M1 Garand, a semi-automatic firearm that was the standard U.S. service rifle in the first half of the 20th century. It’s not quite a WW2 game without that signature ping of the eighth round ejecting from the chamber.

In terms of new vehicles and equipment, War in the Pacific is packed. Both sides get two tanks a piece, among them the U.S. Sherman tank, which is matched by the Japanese Type 97. There’s also the F4U Corsair, with fighter and bomber variations, and its Japanese Zero Fighter equivalent. And two new power weapons join the list of battle pickups, items anyone can wield if they come across them: Americans get access to the M2 Flamethrower, which decimates clusters of ground troops, and for the Japanese, it’s the time-honoured katana. There’s plenty to make you feel like you’re in a different but similarly barbaric theatre of war, where familiar iconography meets new sound and animation. 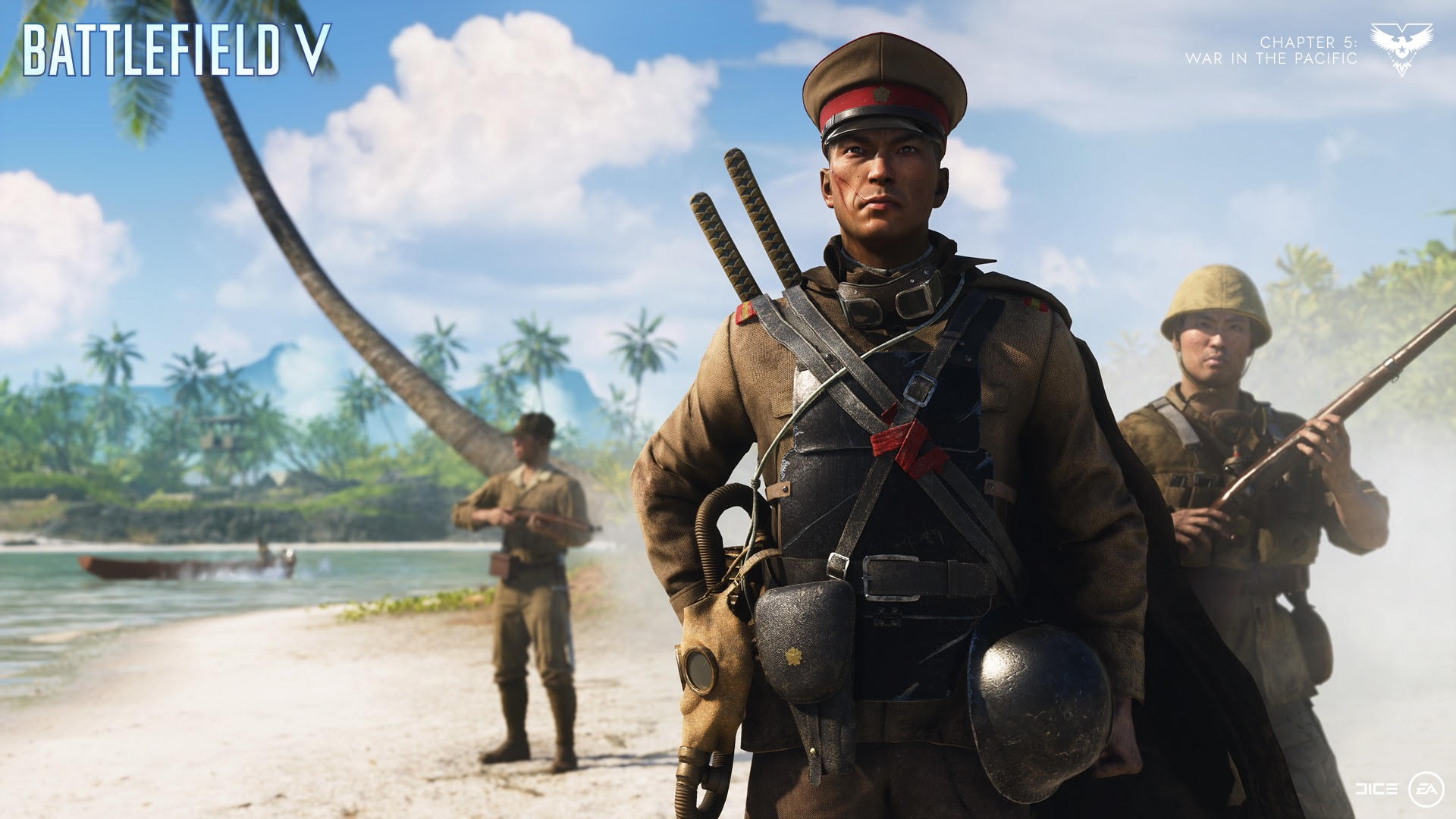 That’s exactly what DICE is aiming for. “What was interesting with Battlefield 1942 when we built that game,” Gustavsson says, “was that during those days, it was primarily soldiers only. And then there were flight sims and there were boat sims and submarine sims and tank sims, and what we did was bring them all together on one battlefield. I still feel that that we’re we’re pretty unique on the market with that concept.” DICE has built upon its land, sea, and air combat since the early noughties, and now in 2019, it’s enriched with environmental destruction, booming soundscapes, and dynamic weather.

The developer is taking everything it’s learned in the interim and returning to the source. “We’re hoping for a fan favourite,” Kertz says. “I mean, this is as close to fan service as it gets in Battlefield. Let’s go back to where it all started.”