There are several endings available for Bloodstained: Ritual of the Night, but how do you get the best one?

Being a Metroidvania title, there are a few extra hoops to jump through if you want to get the best ending in Bloodstained: Ritual of the night.

There’s also a hidden boss fight, so you’ll need to find the 8-bit Nightmare Retro Level first, which you can find the guide for here.

This is obviously major spoiler territory, so this is your one and only warning.

Bloodstained: Ritual of the Night – how to get the best ending

You’ll need to have the Hall of Termination, the Cathedral, Garden of Silence and Forbidden Underground Waterway to proceed. You’ll also need several abilities, which you can find the guides for in our beginner’s guide and secret key and room guide:

You’ll also need the Aegis Plate to let you run across spikes, which you can find in the right tower in the Tower of Twin Dragons. Enter the large area from the bottom, invert and fall all the way down to get the Aegis Plate.

Once you’ve got all that, you’re ready to get to Gebel’s room. First, head to the Forbidden Underground Waterway until you find a hallway that you’ll be able to sink down to using Deep Sinker. Use your Reflector Ray to continue on to the Secret Sorcery Lab. Defeat the Doppelganger inside and carry on to the Inferno Cave where you can get the Invert power if you didn’t have it already.

Next, you need to go through the Spike Hallway which is in the entrance of the castle. Equip the Aegis Plate to run through the spikes undamaged so you can reach the Oriental Sorcery Lab.

You’ll have to face Zangetsu again, but when you defeat him this time you’ll get the Zangetsuto sword, which you’ll need to take down your next foe.

Return to the Hall of Termination, equip Zangetsuto and fight Gebel. You’re not looking to defeat him, just avoid his attacks and inflict some damage until the mood goes bright red. Hit the moon with Zangetsuto to release Gremory’s hold over Gebel. He’ll flee, so you’ll need to go and find him.

Make sure you have plenty of health restoration items for this section as it can get a bit rough. 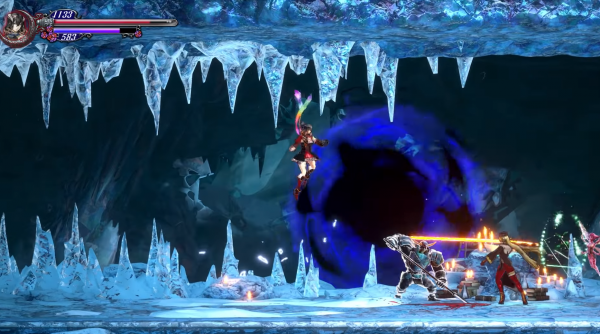 Return to the Garden of Silence and take a ride on the carriage, then jump up on the platforms to your left. You’ll know you’ve made it as the sky and moon will be a dark red colour.

Hit it with Zangetsuto again and a portal will appear that leads to the Den of Behemoths. Fight your way through the enemies and find the Liber Logaeth, Alfred and Zangetsu, who’ll reveal that Dominique has been the real enemy all along. You’ll then enter the Glacial Tomb and face off Dominique, who is a fast and formidable enemy.

The fight will shift to its next phase after a certain amount has been dealt where you’ll face a multi-headed giant boss. The giant cat, demon and frog heads will circle you then fire lava at you, so use Invert to avoid it.

Once Dominique and the demon have been defeated, Johannes will find you. He’ll perform a Rite that will send the demons and castle back to where they came from through a portal. Johannes also reveals that he may be able to stop the crystal from overtaking Miriam permanently.

And that’s it! You got the best ending, well done.

Keep this book in your inventory – I know O.D. said that you need to return any borrowed books, but this is an exception. You’ll also need to have 99% of the map discovered for this to work.

Make your way as normal through to the Glacial Tomb then head to the room on the left of the fast travel point. O.D. is in there waiting to fight you and you’ll receive a Shard, Standstill, which lets you pause time. Return to his room in Livre Ex Machina and you’ll be able to check out all of his books at once.