QuakeCon’s BYOC area has a prison economy where people trade Bawls was first published on August 16, 2018.

I’m walking through the ‘bring your own computer’ section of QuakeCon when, suddenly, a woop erupts from a nearby player.

As soon as the noise leaves their lips, the sound infects the room, moving from person to person. I’m surrounded by the noise. Woop… woop… woop, woop, woop, woopwoopwoop. What the hell is going on?

Nobody in the room is talking to each other. There are hundreds of desks. Everyone is playing a range of games, from emulated Mario to Fortnite and Quake Champions. There’s very little interaction outside of the games, except for the woops.

After asking around, I finally find out what the hive is thinking. The noises, it turns out, are to annoy the handful of streamers attempting to broadcast from the show floor. Fair play. 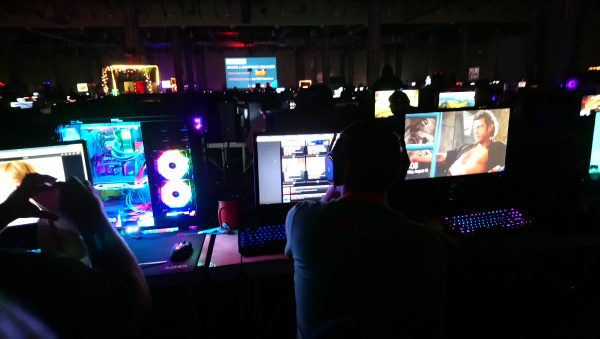 QuakeCon’s BYOC area is bizarre. I didn’t even know there was an energy drink called Bawls until I walked among the towers, cables, and woops of those halls. Where I come from, Bawls are testicles.

In QuakeCon, Bawls are currency. This self-contained mass of gamers operates on a prison economy. In the darkness, you can see people asleep at their desks. Some of them never leave. Some bring mattresses. Most have anime screensavers.

If you trade up, you can even get bootleg beer, so long as you have the Bawls for it. It’s an alien environment.

But among that weirdness, there’s a wholesomeness hiding in the dark. You can make it out in the screen glare. 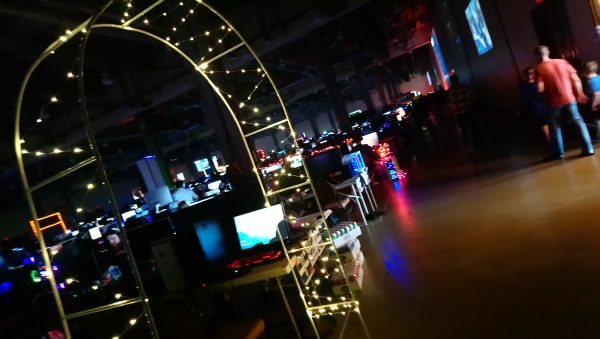 As well as the stereotypical gamer types, there are couples who attend and play games together. You can see dads playing Gang Beasts with their sons. There are childhood friends all in a row, playing their favourite classic together. There are pro gamers honing their skills. There’s a real sense of community, if you’re not a streamer.

And the computers! Among the hundreds of them on the show floor, there are some truly special creations. To name a few of the most outlandish, I saw a fish tank that was a PC, a PC shaped like Bastion out of Overwatch, a PC shaped like a cruise ship, and even a transparent rig that had holographic, spectral hands trying to claw their way out.

Seriously, what the fuck? pic.twitter.com/KvLr4Q1nWy

Many of the people there attend year after year. They bring their partners, they bring their kids, and they bring new friends to experience it with them. You can tell this free show means a lot to some, and it’s heartwarming to see, so long as you don’t accidentally look at the screens of those who’ve gone AFK.

Just remember, if you plan to go next year, bring yer Bawls.