Loot boxes are mostly dead, but microtransactions are getting worse. Black Ops 4 wants people to pay out $20 for two gun skins.

Just the other week, we highlighted the absurd Suicide Squad skins in PlayerUnknown’s Battlegrounds. If you thought $25 to make your character look like a supervillain in a terrible film was bad, Call of Duty’s latest is next level.

Not long after launch – once reviews landed, of course – Activision rolled out the Black Market, where players can purchase cosmetics and the like. In the latest patch, the Fall Firearms pack was added, which includes two weapon skins and a host of calling cards and tags. 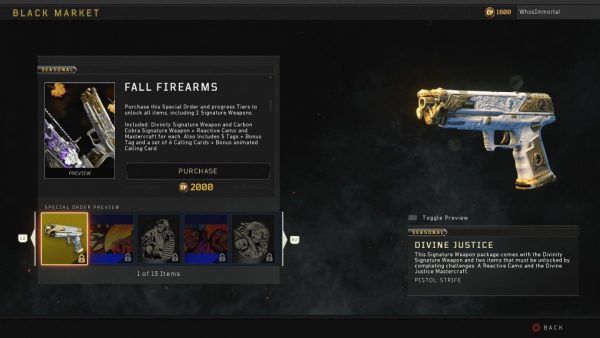 This pack costs 2,000 COD Points, which is $20 in real money. However, that $20 only gets you access to one of the two skins you’ve purchased – you have to grind for the rest.

To get the second skin, you have to get through tiers and complete challenges. Tier progression is based on time played, and roughly equates to an hour per tier. Of course, you can bypass tiers for $1 each.

The skin in question is Divine Justice, which was previously available as a pre-order bonus from select retailers. People on eBay are actually undercutting Activision and selling codes for the skin for $5.

As you would expect, the community is not happy.