I’m playing the gamescom build of Anthem and I’m unleashing a rocket barrage on a group of ten enemies.

Fire and explosions are filling the screen, one of my allies is hovering overhead and they toss a frost grenade into the carnage. The near-dead enemies freeze up, and another player leaps in with an energy sword, slamming down and shattering them all to pieces. It’s an overused word, but it can only be described as epic.

Of course, this demo takes place around the midway point of the game, the developers have equipped us with some rare kit, and we’re joined by two experts from the team to make the combat scenarios really sing. So how does combat look when players are starting out? 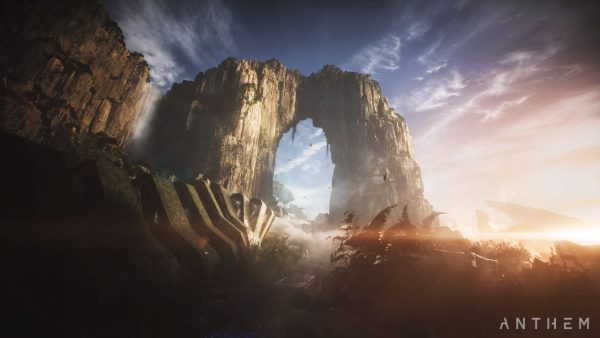 “You’ll always have your pieces, but that frost grenade in the demo is a legendary item, and the pulse cannon you had is either epic or legendary,” game director Jonathan Warner admits. “We loaded that up with some extra bells and whistles so you could get that cool experience. You’ll start out and the first horizon that you’re chasing is the rarity horizon – I’ve got my javelin, I have common gear, and now I want to get my uncommons.

“One of the beautiful things about creating a cooperative PvE game like this is we don’t have to worry too much about power curves on our weapons. We can make them ridiculous because you might fancy, at the endgame, just wiping out [the enemies] and sometimes that can feel great.”

Like in many RPGs, enemies will still scale so the challenge rises with your team’s abilities, but that scaling isn’t tied to the power of your javelin, those devastating armour suits with rocket boots.

“When we look at scaling, it’s more about your pilot level. There’s a method to it,” Warner says. “It’s important to point out that this idea of the pilot – the character is really key to the Anthem experience. At the beginning, you’re not lumped into a class – if you want to be a ranger, you’re not locked into just picking ranger the entire campaign. Your pilot can own many javelins and you can kit them all out and swap them as you need to, or as you want to.”