Activision Blizzard discussed Call of Duty: Black Ops 4, Overwatch, World of Warcraft, Destiny 2, and more during its Q1 2018 call to investors this evening.

Activision Blizzard has released its Q1 financials for the period ending March 31, 2018, and discussed plenty of engagement numbers.

Overwatch saw a higher player participation rate with Retribution than any prior event. That may or may not change when the Year 2 Anniversary event rolls around in May.

The average Overwatch League has high engagement too, and the average viewer spends over an hour each day viewing the matches. New teams are expected to be added to the league this year.

Blizzard games had 38 million MAUs with World of Warcraft over-performing versus the prior expansion at this point in time, with higher engagement and community participation with in-game purchases.

Pre-orders for the upcoming expansion, Battle for Azeroth, are ahead of plan. Hearthstone continues to see strong engagement.

Destiny 2 fans can expect information on the large fall expansion at E3 2018 in June.

“What’s coming this fall [include] innovations and gameplay, including what we think will be an incredibly engaging new mode,” said said Coddy Johnson, Activision president and COO. “One that introduces a whole new style of play for first-person shooter gaming generally and certainly for the shooter space that Destiny created.

“It’s a really exciting development. It’s one of the things that we feel really speak to the community when it comes out in the fall, and we’re really excited to share more about that. We won’t do that until E3.”

As previously reported, the fall expansion is expected to release during Season 4 in September. Until then, Warmind will release alongside Season 3 next week on May 8.

Call of Duty purchases grew year-over-year, with Call of Duty: WW2’s first quarter second only to that of Call of Duty: Black Ops 3. The Black Ops series has brought in 200 million players and is the most popular ‘sub-franchise’ in the series with over 15 billion hours played.

The company wouldn’t be drawn on much regarding Black Ops 4, other than it has confidence in Treyarch, and players can expect “a number of great developments on the core game itself beyond innovations.”

“Treyarch’s track record of innovation, including Zombies and multiple multiplayer innovations have really transformed the industry,” said Johnson. “And it’s a most important last point, which is that this is a game that’s not going to just build on our strengths. It will continue to push the envelope in innovation.

“You’ll see that in the core game itself, where we have a number of new exciting developments to roll out very soon, but also in the game’s appeal on growth platforms like PC, where we’ve invested significant dedicated resources and design time to make sure we can deliver a great PC game to serve that community.” 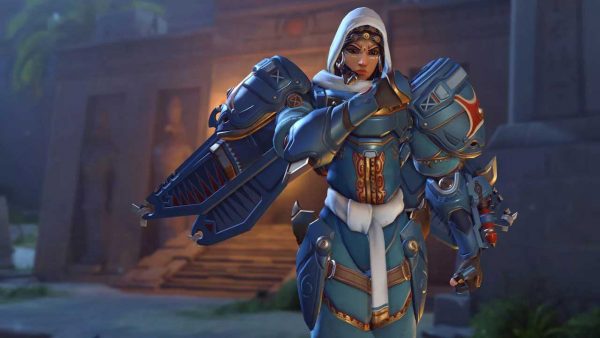 Net bookings for the quarter, which is the net amount of products and services sold digitally or sold-in physically, were $1.38 billion. This figure is up from $1.20 billion year-over-year.

For the first quarter ended March 31, 2018, Activision Blizzard’s net revenues were a Q1 record at $1.97 billion, compared with $1.73 billion year-over-year. Revenues from digital channels hit a quarterly record at $1.46 billion. 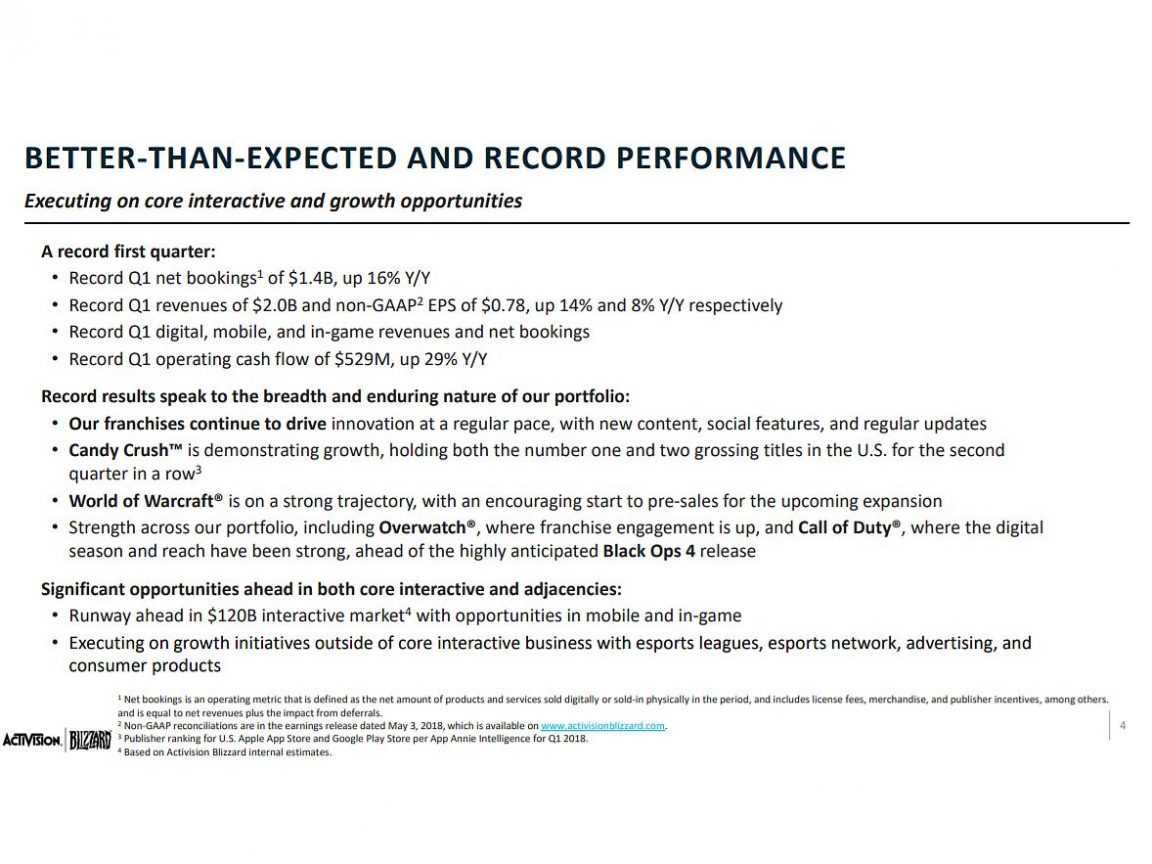 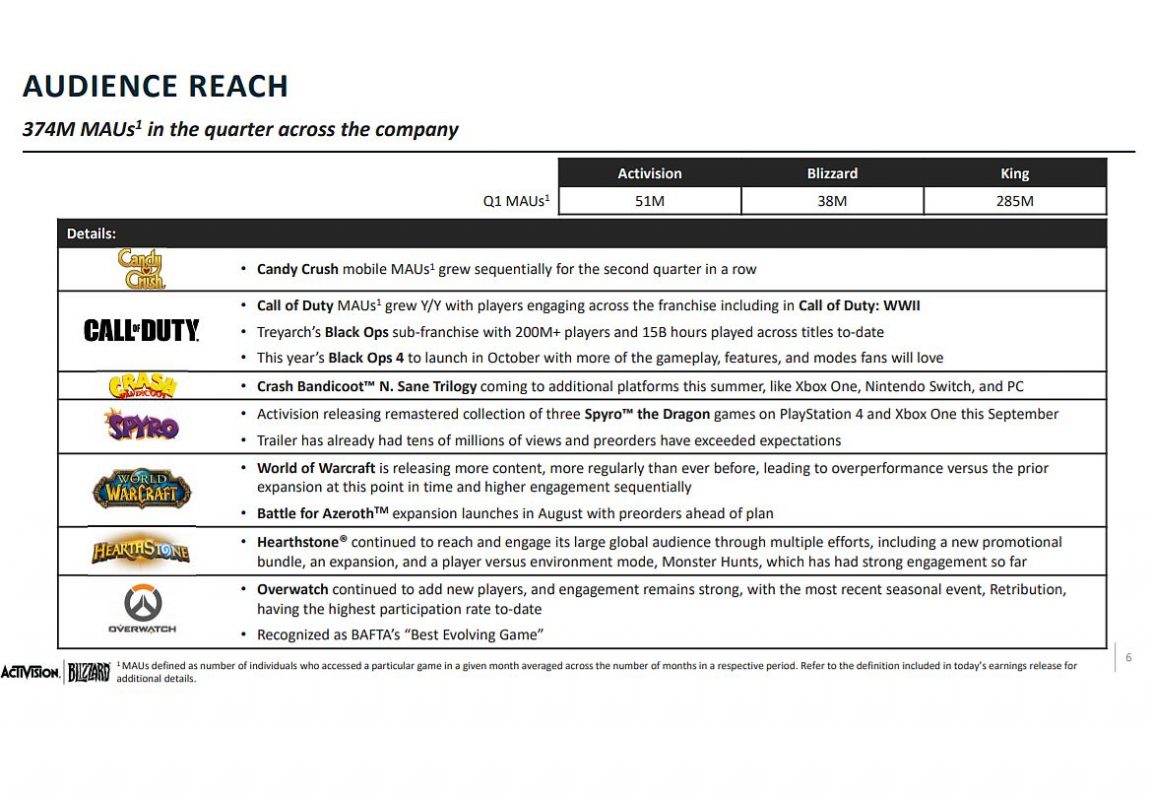 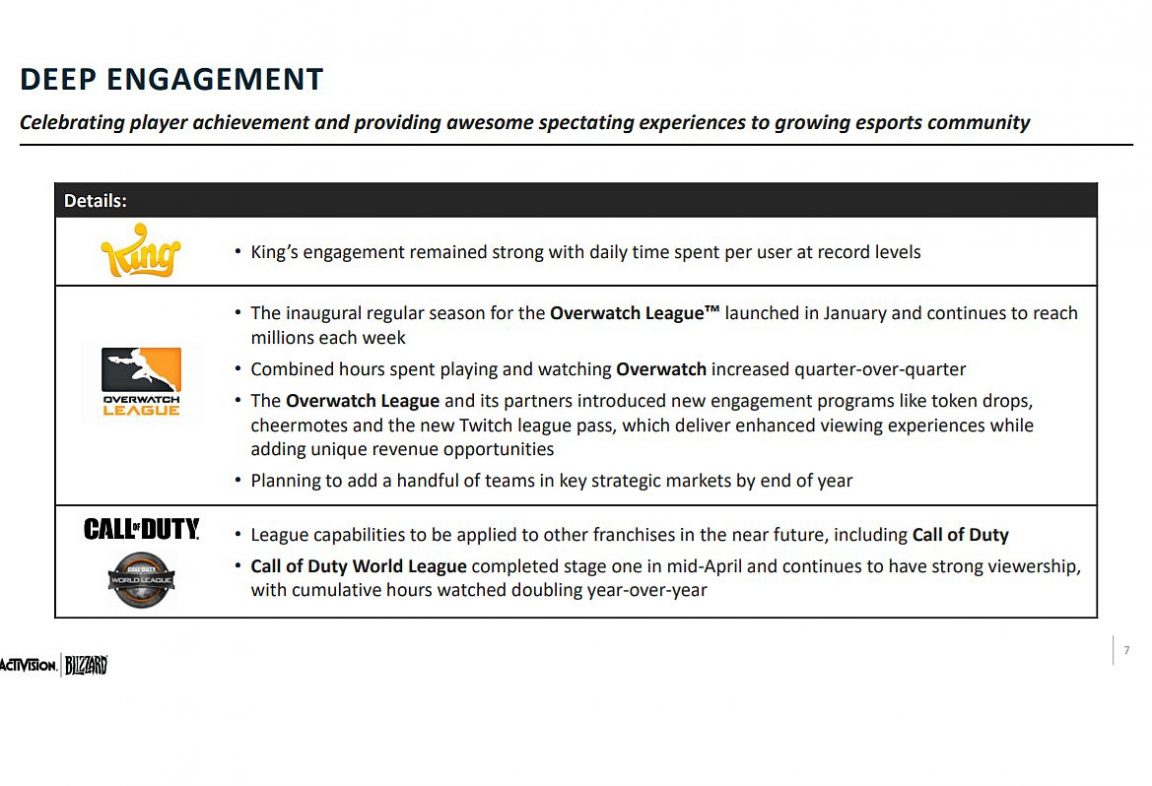 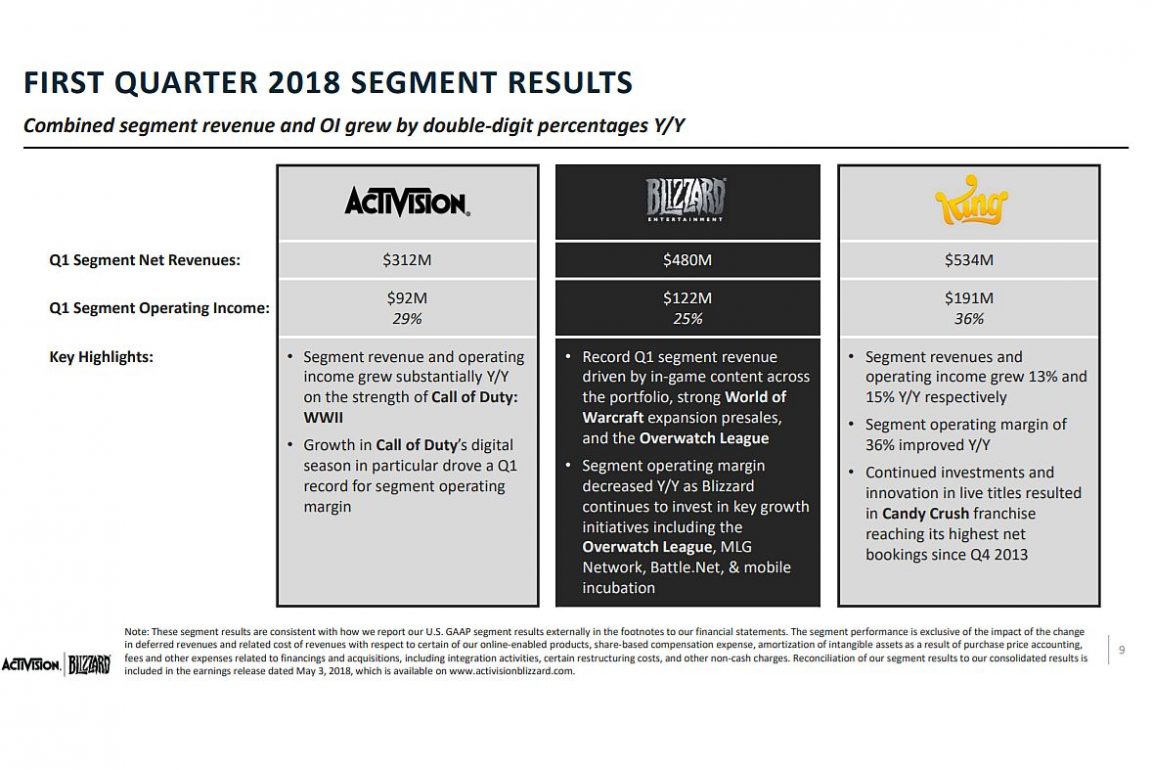