Eden’s Gate is coming for you.

About two hours into my hands on with Far Cry 5, I spot a prepper who’s sequestered himself on a makeshift platform at the top of tree overlooking a lake. I tag him with my binoculars, and a red bullseye above his head not only lets me know that he’s unlikely to invite me up to his hidey-hole for a few cold ones, but is packing a deadly long-range sniper rifle as well.

My new prepper friend is busy fishing in the lake below, so he doesn’t notice as I crouch-walk slowly through the long grass towards the water’s edge, line-up a shot and fire once.

Close by, there’s a couple of elevated boathouses on either side of the lake, connected by a zipwire. So I jump up a ladder, fly across, and make the running jump to the prepper’s platform. Looting his backpack gives me some explosive crafting materials along with a handful of experience points, so I make a few supplies and get ready to move out.

I spot an ATV at the base of the tree and jump down, ready to speed off to my next destination and more mayhem. But as I do, I start to see stars, my vision goes hazy and I fall to the floor. This, I’m told, is what happens when you really start to piss off Joseph Seed – The Father – and his cult of unyielding followers at Eden’s Gate; they come looking for you. 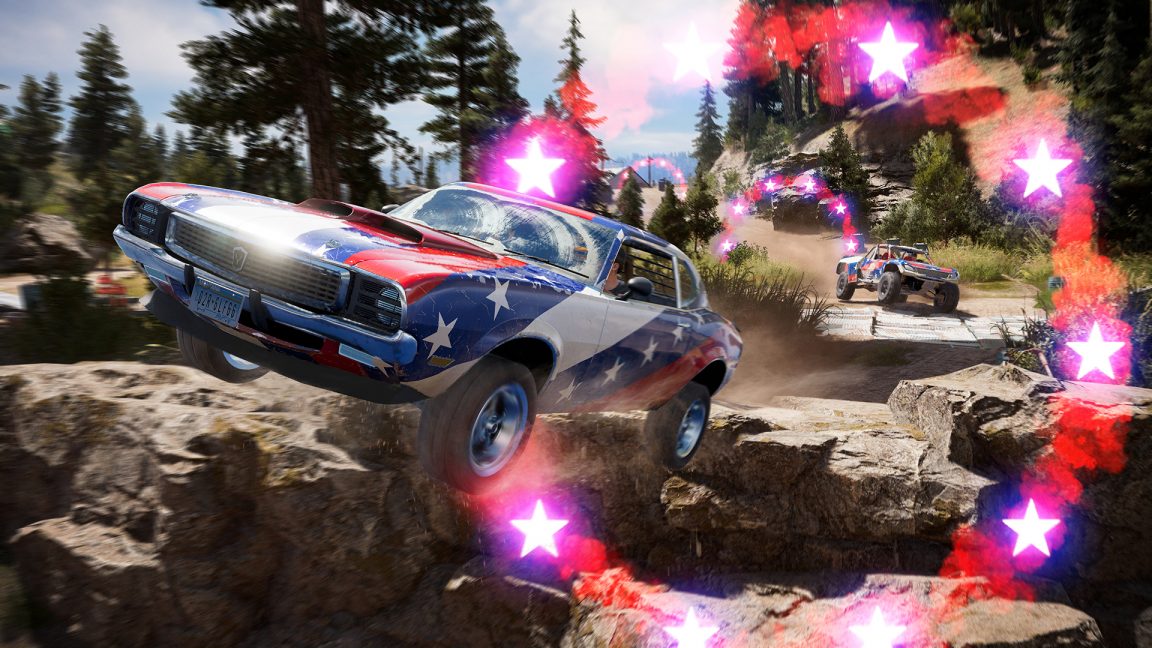 “Where you could just burn past enemies in previous games, Far Cry 5’s ‘peggies’ don’t let up.”

Following a brush with Seed himself, I’m rescued by shotgun-wielding Pastor Jerome Jeffries, and we set out to save a few more members of The Resistance – locals who’re fighting against The Father’s control – from a cultist fortification. After a bloody battle, I free the hostages and wipe out the remaining enemies with a mortar, before absconding in a helicopter.

In that 25-or-so minutes, I’d run through a ton of Far Cry 5’s core elements: free-form exploration in an American landscape packed with distractions and diversions, frenzied action, and an intense and eerie story juxtaposed with plenty of the series’ signature brand of tongue-in-cheek silliness.

Far Cry 5 is instantly familiar to anyone who’s played the previous installments, albeit with a few key differences. Driving is still a bumpy ride, as you tip, slip and slide around Hope County’s highways – although roads are very much optional – while guns and the game’s UI also still have the same feel.

It goes without saying that combat is a massive part of Far Cry 5 and thankfully the weighty gunplay and weapon variety we’ve seen before is still there. Baseball bats and thrown weapons connect with a satisfying thunk, dynamite is perfect for countering reinforcements arriving by car, and while deadly, assault rifles have a strong kick – which takes some getting used to – meaning you have to concentrate and stay engaged in the action to hit your targets.

Enemies can rip through your health pretty quickly if you’re left exposed and you only have a limited amount of restorative items before you need to craft more. But to help tip the balance in your favour, you can recruit AI-controlled Guns for Hire who help in battle, or if you’re more into four-legged friends, there’re Fangs for Hire too. Companions can be quite useful for scouting and diversionary tactics because you can easily maneuver them into different positions, plus when the going gets tough they actually chip in with a few kills.

One of the most perceptible gameplay differences though is how aggressively you’re pursued and harrassed by the Eden’s Gate cultists. Where you could just burn past enemies in previous games, Far Cry 5’s “peggies” don’t let up. Cars and trucks you pass on the road whip ‘round to chase you down with mounted machine guns and automatic fire, passing convoys stop to join their friends in a fight, and heavily armed capture parties frequently assault liberated strongholds.

This means it’s more difficult to make a beeline for particular objectives, but also helps to make Hope County feel more densely populated. When the game’s throwing something new at you all the time it totally disrupts your moment-to-moment planning, so moving around the game world is constantly chaotic, fresh and interesting. 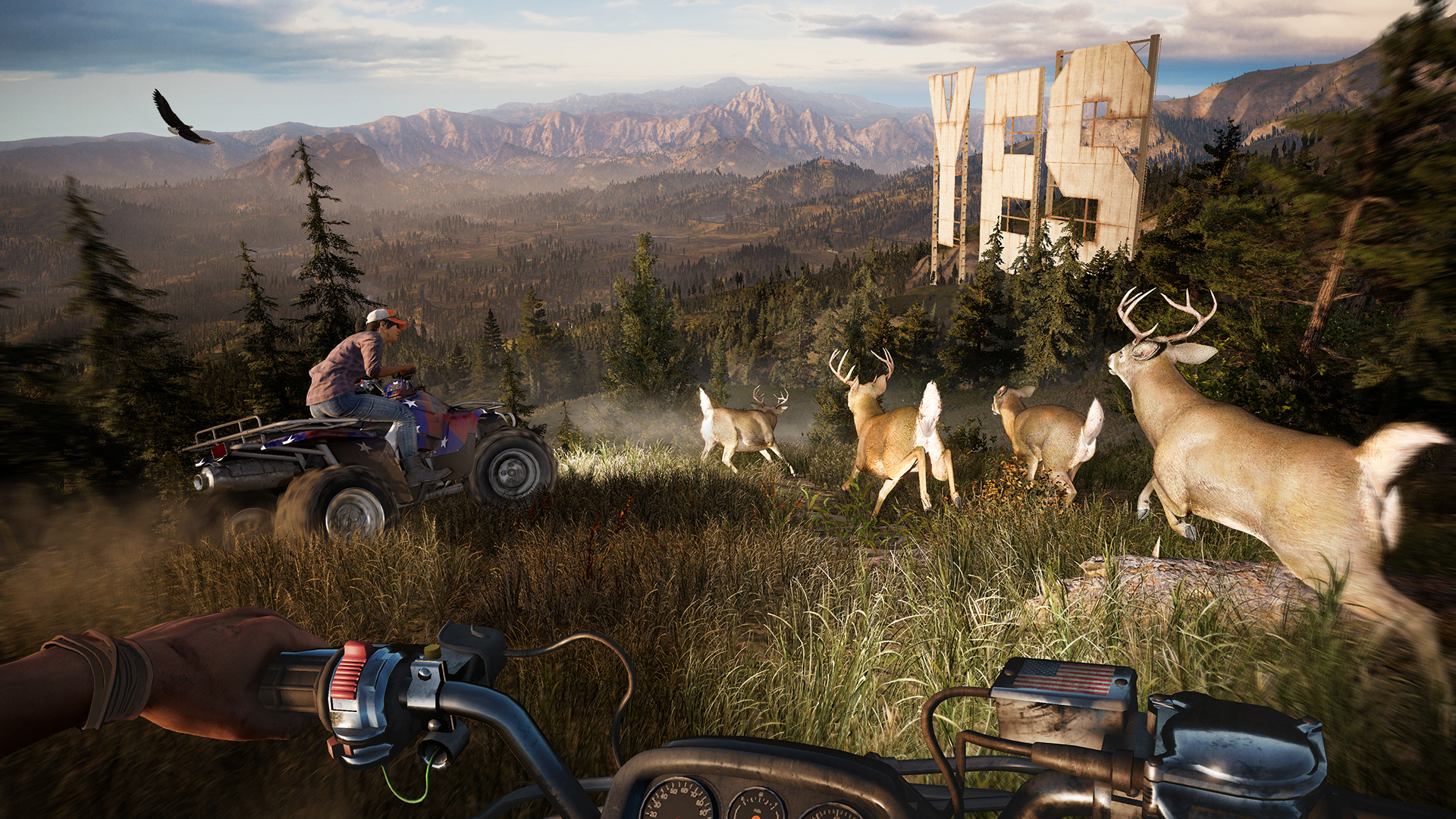 It’s not just humans you have to contend with either. About 800 grizzly bears live in real-life Montana, and in Far Cry it seems like each and every one of them is waiting just over a blind hill or behind a thicket of trees, ready to maul your face off. Northwestern fauna is common in Far Cry 5 – as you’d expect with what’s become such an integral part of the series – with (seemingly) less dangerous animals like cows, pigs and deer joining the bears, wolves, cougars and wolverines we’ve seen in trailers and gameplay around the web.

The animals do a lot to enhance the local character of Hope County, especially the farm-yard critters. You can give bitier denizens a wide berth and things usually turn out fine, but the reverence that you have to treat them with just adds yet another thing to think about in the moment-to-moment mix. When you’re walking or driving anywhere, you’re going to bump into something along the way.

All of this is supplemented with a non-linear progression system, where story progress is achieved not by completing specific missions, but all sorts of activities around the map. That might be beating up Eden’s Gate cultists, killing their leaders, blowing up their silos, or retaking safehouses they’ve annexed. There’re also doomsday prepper stashes littered around the world, stuffed with loot and booby-traps.

These, along with more traditional story and side missions, help you to build up both XP to level up your character, and Resistance Points. The more of the landscape you clear, the more the locals start to trust you and your ability to stand up to The Father. But as you start to drum up more resistance, the more you attract the cult’s attention too.

Once you reach a certain amount of resistance, it triggers events in the world like – as I mentioned before – ambushes that lead to major missions. 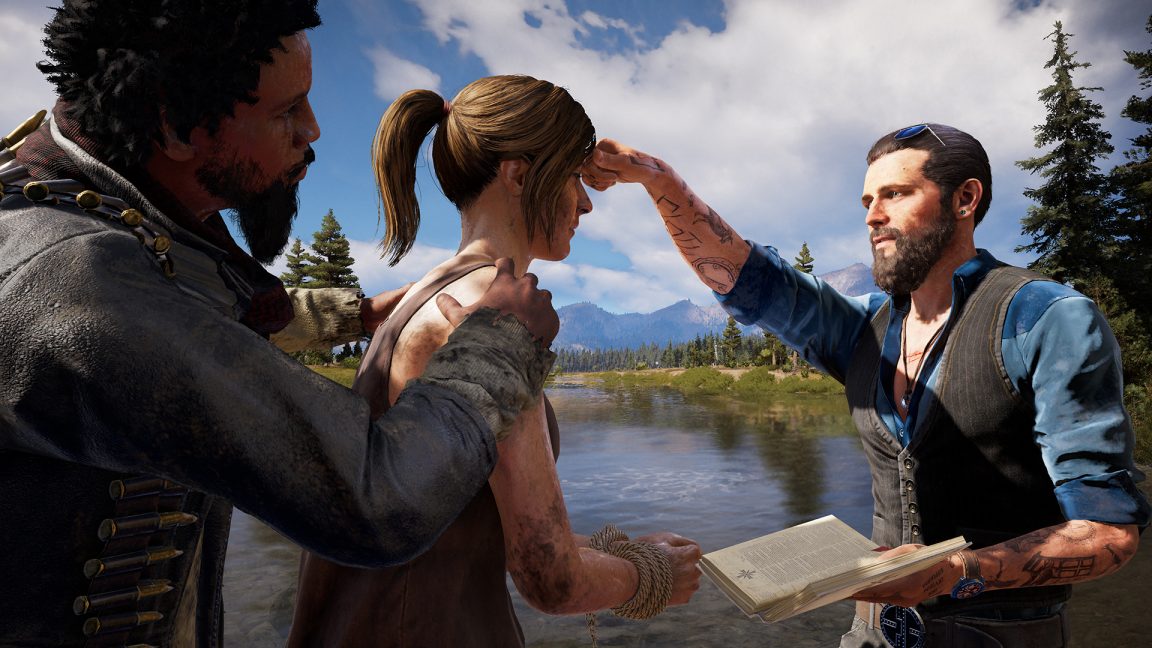 In a game so much about choice and freedom, it gives the antagonist a real sense of power that he and his cult can wrestle that choice away from you at any time, forcing you into situations that you’re unprepared for. It lends that key mission a real sense of urgency, and makes for a great change of pace.

Far Cry 5 overall then, is an iterative expansion of everything we’ve come to know and love from the series. The looser structure gives the secondary activities – which a lot of people thought were the best bits anyway – more of a grounding in story, so it feels like you’re always working towards a tangible end-goal rather than just wandering aimlessly.

Since we only got to explore a relatively small portion of the game’s map though, it remains to be seen whether the whole game can sustain the same level of density without running through all its tricks too quickly.