Assassin’s Creed Origins players have until Tuesday to level up and have another crack at the Trials of the Gods events.

There have been three time-limited Trials of the Gods events in Assassin’s Creed Origins, giving us the chance to beat up Anubis, Sobek and Sekhmet to earn exclusive Legendary weapons and an outfit.

Unfortunately these bosses are pretty difficult if you’re not at least approaching endgame in terms of level and equipment, and the first one, in particular, left many Assassin’s Creed Origins players frustrated and unable to complete it.

Happily Ubisoft has turned all three Animus Glitches on right through December 26, so you can have another go at the three Trials of the Gods events. Hopefully you’re on holidays and have plenty of time to play Assassin’s Creed Origins so you’ll be strong enough to do so.

Even if you did beat all three Trials of the Gods events already, it’s worth firing up Assassin’s Creed Origins again. The first time you beat a particular god during this event period, you’ll receive one of the four Anubis Set weapons you have not yet received, up to a total of three – one for each god. So as long as you’ve beaten at least one of these beings before, you’ll eventually collect the full set of:

Once you have collected all four pieces of the Anubis Set, you’ll also receive the the Anubis outfit. Finally!

Ubisoft is holding a community challenge, as well. If the gods are collectively beaten enough times on a particular platform, every player who participated will receive the very handsome Sunslayer Sword. We need to hit 275,000 kills on PS4; 175,000 kills on Xbox One; and 75,000 kills on PC. That includes repeat kills, by the way, so get in there and earn a bunch of XP and drachmae as you contribute to the total. Check progress from the Ubisoft Club tab in game or via the mobile app if you have that. 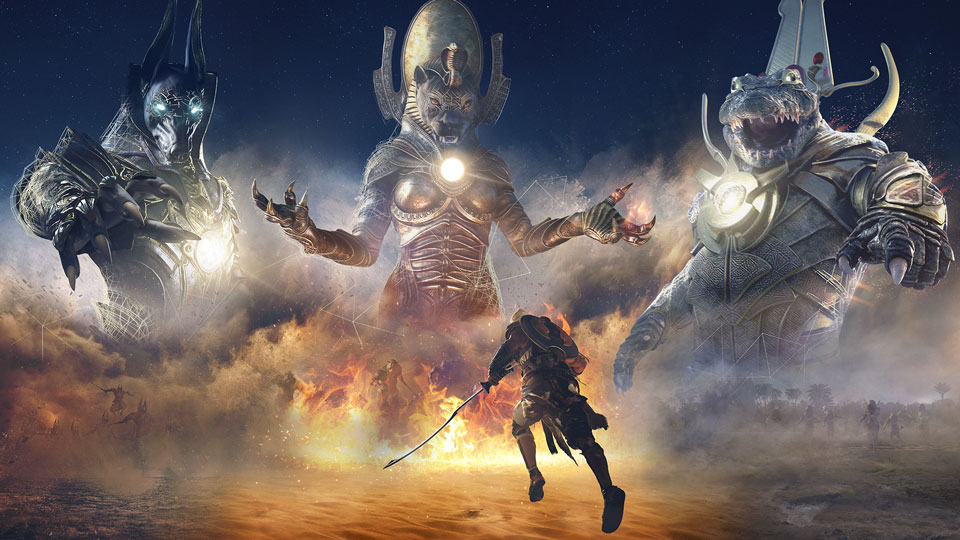 If you’re struggling to meet the difficulty level here, maybe our Assassin’s Creed Origins guide can help. We’ve got a boss fight walkthrough for the Anubis Trials of the Gods event and a boss fight walkthrough for the Sobek Trials of the Gods event. I didn’t do one for Sekhmet because I was busy, forgot about it till the very last day and only just managed to get in before the deadline, but don’t worry – it follows the same format as the first two and I actually found it easier.

If you’re not yet at endgame I’d recommend boning up on how the weapons, equipment and upgrade system works in Assassin’s Creed Origins, and to fill your boots with Legendary weapons by solving Papyrus riddles and beating up the Phylakes. Hope that helps!