The latest update for Breath of the Wild contains a new quest, and with it comes some lovely – and free – new armor.

Xenoblade Chronicles 2 is right around the corner, and in order to promote the game Nintendo has built an all-new quest into their most RPG-like game on Switch so far – the open-ended and brilliant The Legend of Zelda: Breath of the Wild.

As soon as you’ve downloaded the latest patch for the game on either Wii U or more likely Nintendo Switch you’ll notice that when you load the game a new quest appears in your quest log. Titled [Xenoblade Chronicles 2], this quest comes in three parts and offers you up three pieces of armor – but to get your hands on this new armor, the Salvager Set, you’ll need to ‘find the red shooting stars’, with each shooting star’s location suggested with a cryptic clue.

First off, here are the clues… and then we’re going to break down their locations with the same level of detail as in our main Zelda: Breath of the Wild Guide. 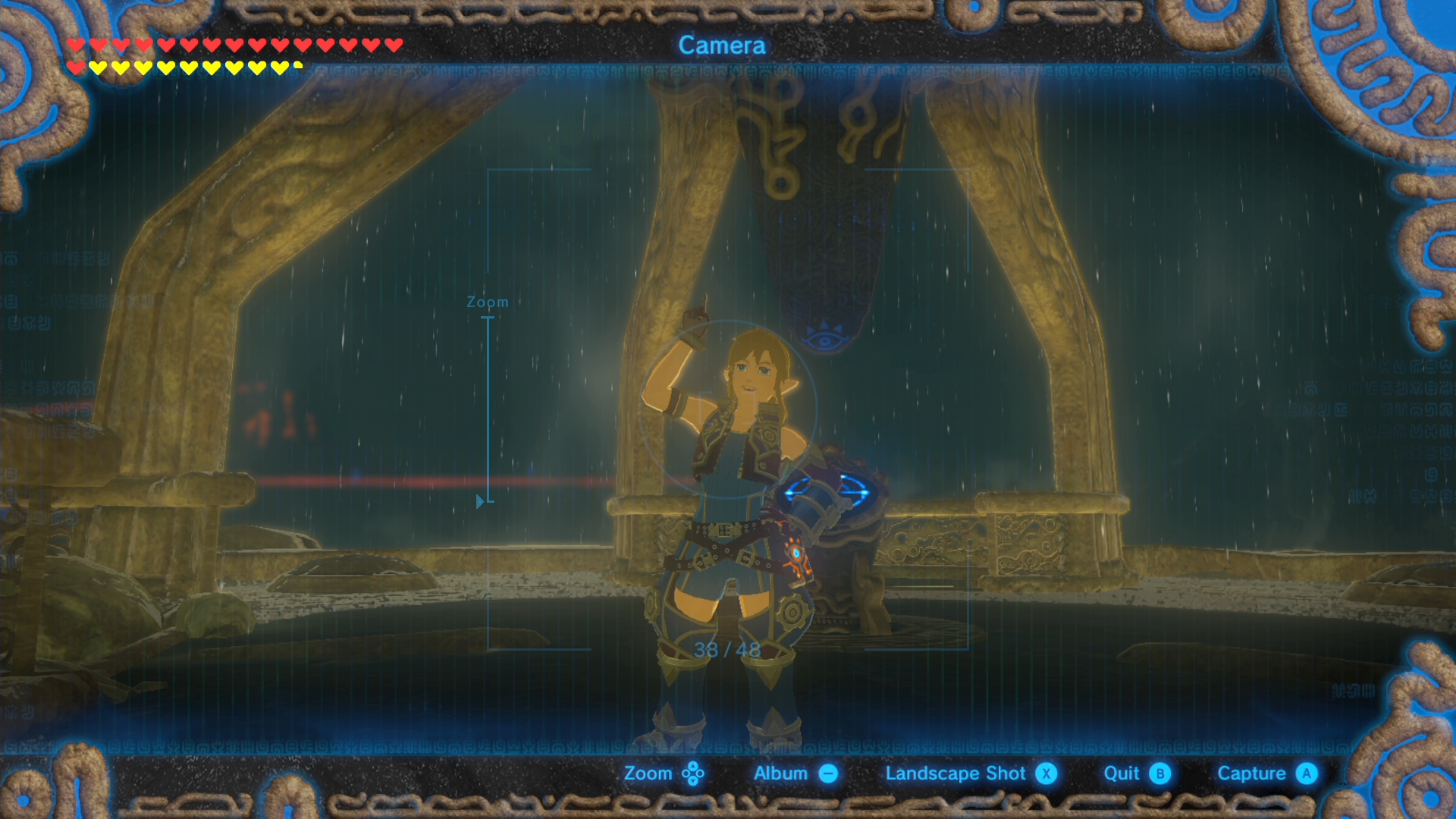 Here’s how the quest essentially works: every time you stand in the right spot at night time (between say 22:00 and 04:00 in-game time) you’ll hear a tell-tale noise and see a bright red shooting star streak through the sky. That shooting star will slam into the ground nearby. When you head towards it you’ll discover it’s a red glowing chest. Open up that chest and – voila – you’ll find yourself a piece of the Xenoblade 2 armor. Wearing the complete set will give you a significant bonus to your swimming speed, something extremely useful in certain parts of Hyrule.

Okay, with that said, here’s where to find them all. Spoilers!

This one is nice and easy, since there’s only one really important large bridge in the Zelda lore – the bridge that crosses Lake Hylia, most famous for its appearance as the site of a jousting match in Twilight Princess. It’s even in Super Smash Bros! In Breath of the Wild Lake Hylia is found South of Hyrule Field more or less square in the middle of the map, and the Bridge of Hylia is crossing it. See the map: 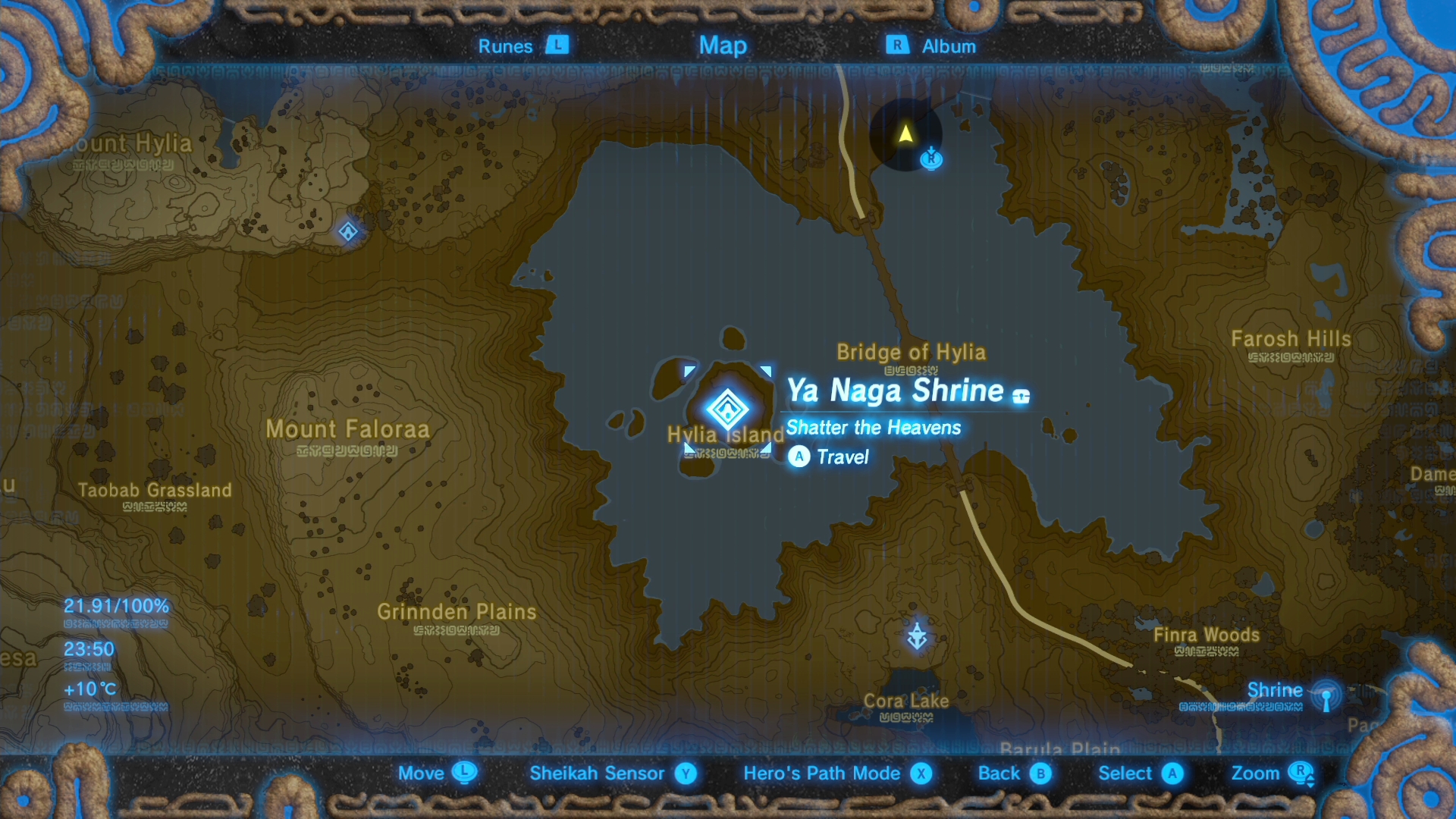 The nearest tower is the Lake Tower, and the nearest shrine is the Ya Naga shrine, as pictured. Once there, you’ll want to head to the very middle of the bridge – there’ll be some enemies here as well as a fountain, some wooden boxes and a ruined cart and so on.

Do what you’ve got to do, then when you’re ready look to the South. Move the camera around and keep looking, using the map to orient yourself. When the star comes down, you won’t miss it… Head down to the ‘shooting star’ to find a chest with the Salvager Headgear in it. 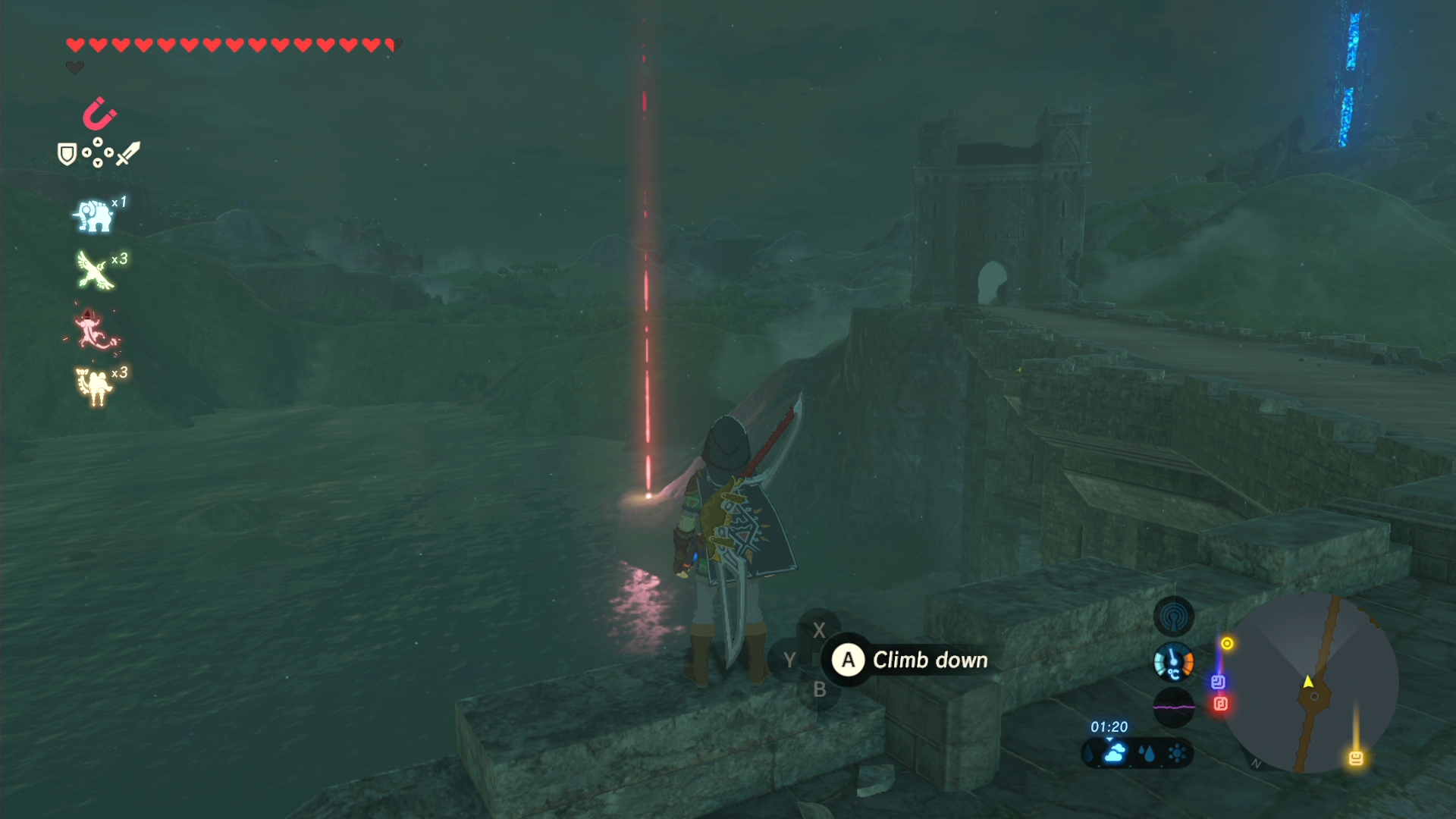 The second riddle refers to Skull Lake, a location found in the far north-eastern area of Hyrule. Just look to the right of Death Mountain on your map, looking for an area that’s no longer mountainous but before you hit the coast. Skull lake is generally pretty obvious thanks to its shape… it’s shaped like a skull. Duh. See the map… 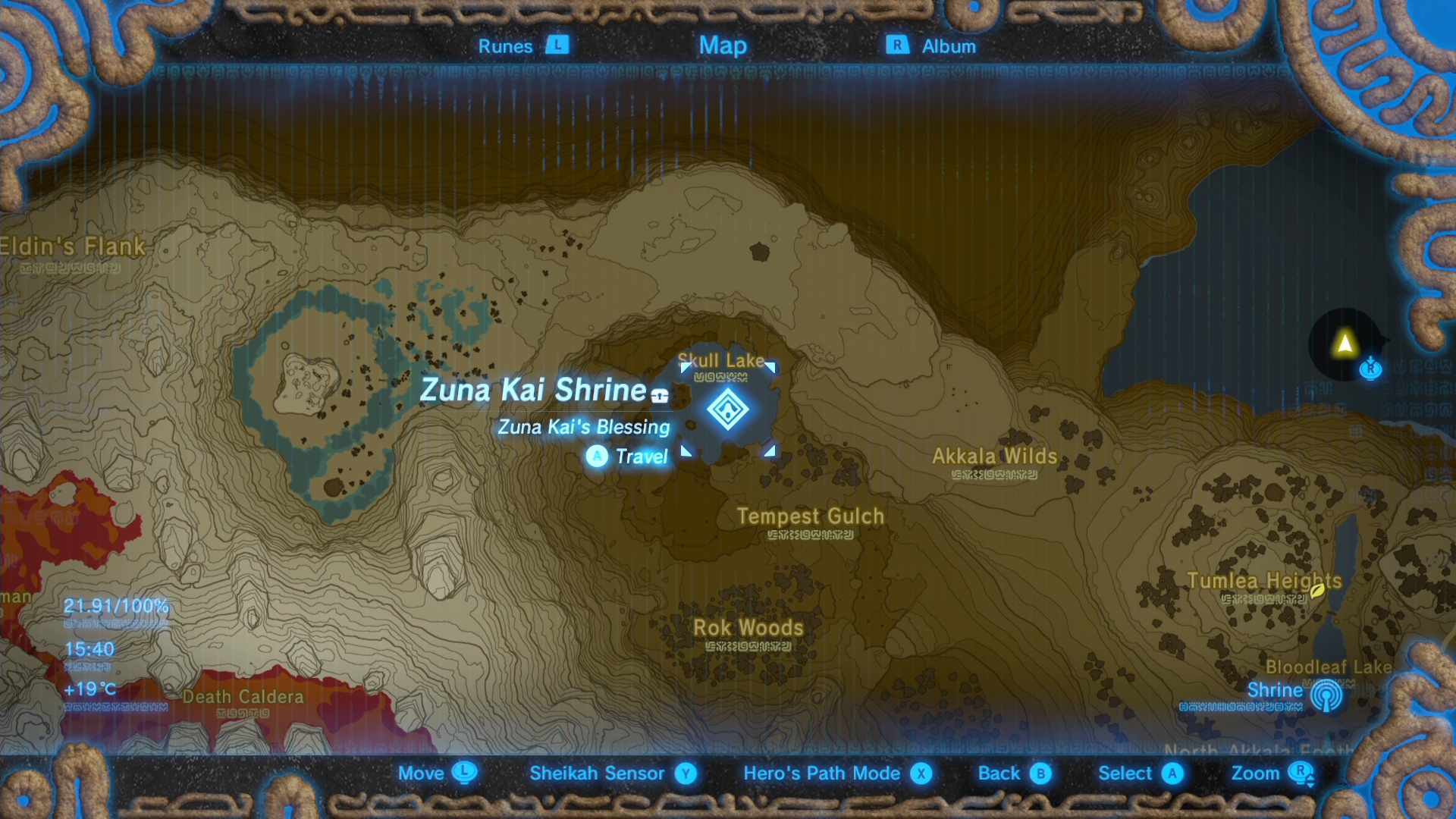 Skull Lake is pretty easy to reach, since if you’ve been here before you’ll find the Zuna Kai shrine right atopm the right eye of the skull – and that’s exactly where you need to be, in fact. Stand atop this area on the entrance area to the shrine and look east – you’ll eventually hear the star drop.

It’ll streak out of view behind a mountain ledge, but just glide and climb over there and you’ll find your reward waiting for you: the Salvager Vest. 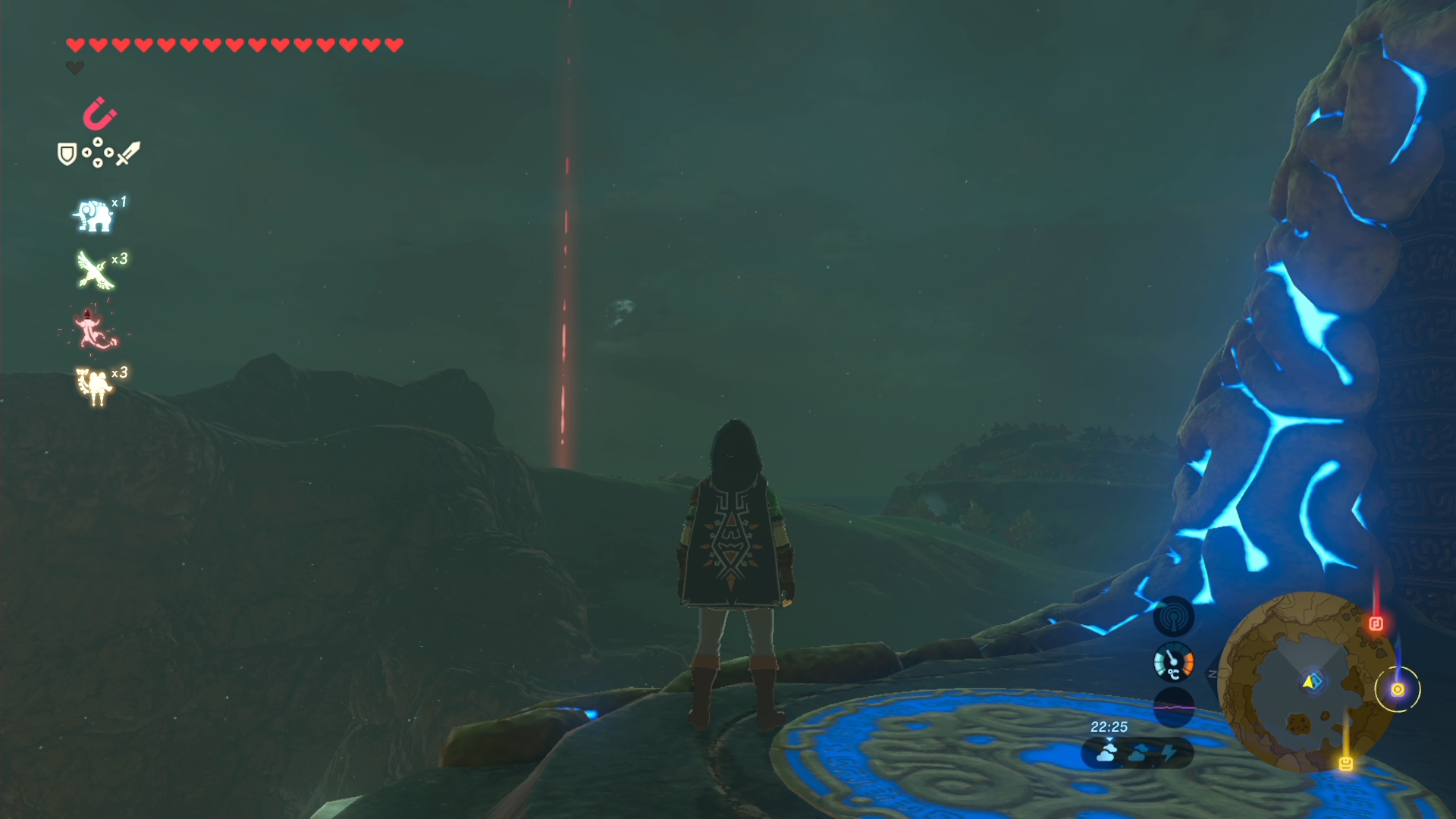 “The southeastern sky from the peak of the tall, pierced snowy mountain” – the final red shooting star

The last of the shooting star hint locations is hardest to reach. When you think a snowy mountain you’re probably thinking of the one to the East of Hyrule with the Dragon – but no! We want the Mount Hebra, in the North-West part of Hyrule. Check the map if you want to know the exact location, but this mountain peak is one of the tallest in the game – bring warm clothes to survive! 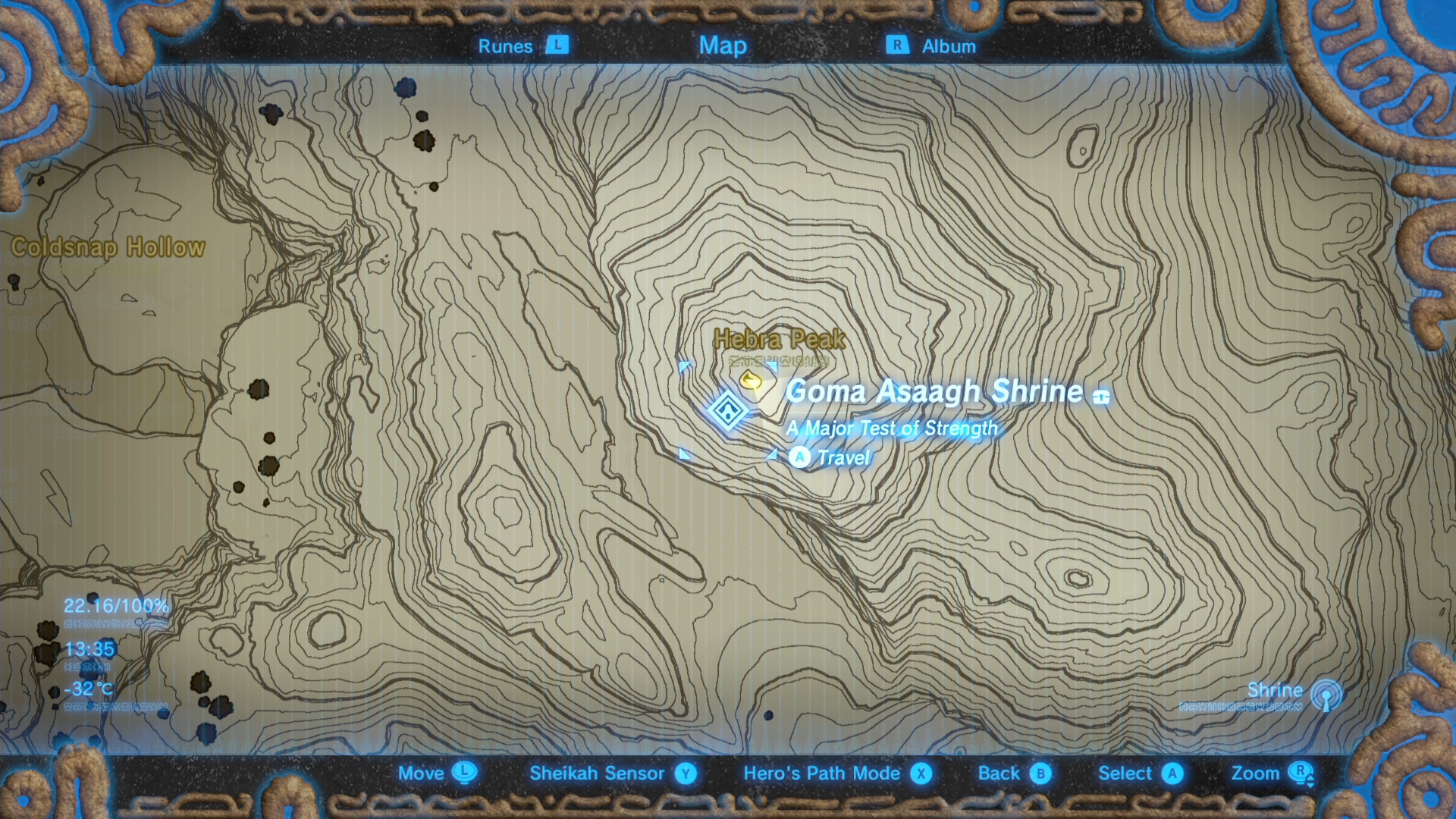 As pictued, the Goma Asaagh shrine is the nearest shrine, and even then you’ll have quite a bit of climbing to do. No towers are really all that close, so prepare yourself for a trek. Once atop the mountain (and you’ll know when you hit the top since there’ll be a Korok hanging around), look towards Hyrule Castle – this is the south-east from here.

Once the time is right, the star will drop at the correct time and slam into the ground nearby. Head oiver there to find the Salvager Trousers to complete the Salvager Armor set. 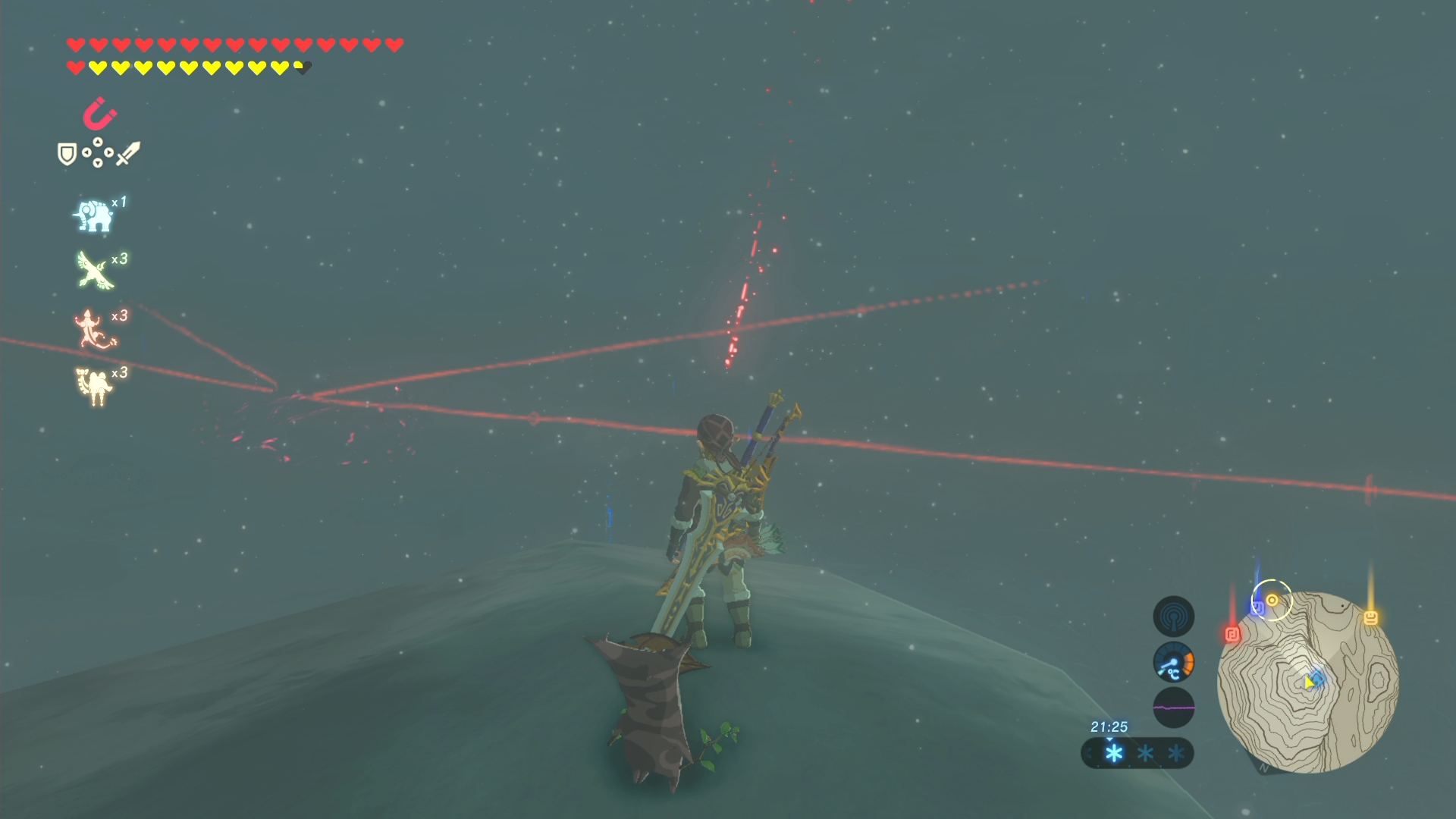