New For Honor content releases and improvements are in the works along with dedicated servers.

Ubisoft announced dedicated servers will be made available “further down the road” today, along with two seasons coming to For Honor this year.

The company passed along the current development schedule, which is as follows:

Dedicated Servers – The development team at Ubisoft Montreal is currently working on a dedicated server infrastructure. In conjunction to the dedicated server implementation, enhancing peer-to-peer stability and matchmaking remain priorities for the team. 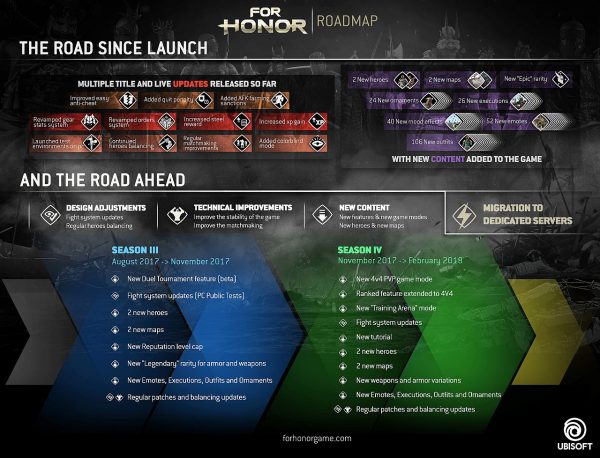 If you head over to the Ubisoft Blog, creative director Roman Campos-Oriola discusses the For Honor roadmap, along with how the team at Ubisoft Montreal is taking community feedback into account with these upcoming features.

Give the image above a look for a closer look at what to expect in Season Three, which kicks off in August, and Season Four in November.